I've been slowly getting back into some big battle sci-fi, thanks to some help from my Epic40K playing friends. I've so far not played that actual game, but I've been looking at Laserstorm, the latest game the making from Ivan over at NWG.

This will mostly be a AAR, but I will endeavour to talk a bit about the mechanics as we go along.

This also gave me a great opportunity to play with the recently finished NIJA and USS armies!

The two adversaries faced off over a few strategic objectives in the deserts of a disputed colony. Each objective would give the controller 1 point at the end of the round, the winner would be the one with most points after 6 rounds, or whoever was still standing. 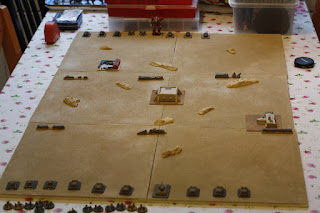 The battlefield, as the two forces show up. 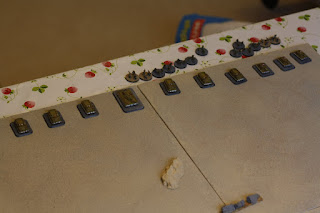 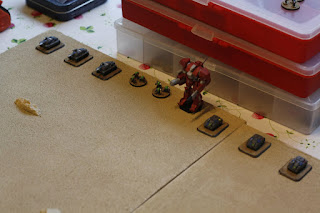 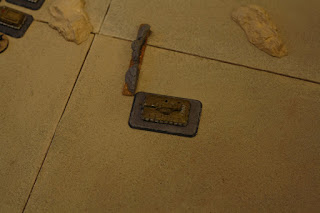 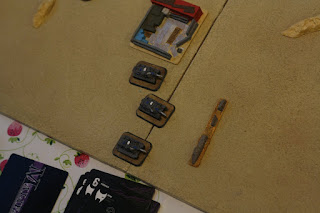 Laserstorm uses a card activation mechanic to determine the order of activation. Each army is divided in to 3 equal battlegroups (or as close to equal as you can get) and each such group is assigned a card.
Along with the unit cards, you can also add snap action (reaction cards) and special event cards (for special scenarios; could be a sudden storm that limits visibility f.x.) 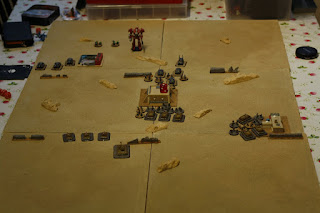 Start of turn 2. The entire 1st turn was spent moving into place, the score at this point: NIJA 1 USS 1. 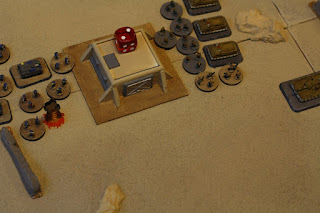 First blood goes to the NIJA, their super heavy tank opens up on the USS infantry, causing a casualty.
At this point the USS infantry is forced to make a morale test, to see if they stay in the game, or if they fall back to regroup. Morale tests are taken with a single d6 and you need to match or beat the morale score of the unit in question.
The USS infantry fail their morale roll, and are put into reserves. This means that they are taken off the table, and next time they activate a commander can roll to see if they regroup and re-join the fight. 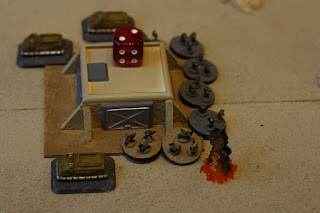 The behemoth fires, blowing an NIJA infantry unit to bits. They also fail their morale save, and have to fall back. 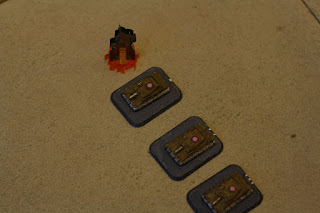 USS tanks close on the shaman tanks, and one goes up in a brilliant explosion! The tank crews are made of sterner stuff than the poor bloody infantry, so they hold. 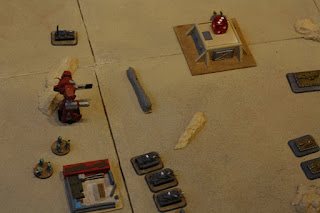 Start of the 3rd turn. Scores are now NIJA 3 USS 2, due to the NIJA commander holding on to the middle objective after both infantry units fell back. The Sohei super heavy fires it's complement of weapons at the behemoth, but the giant just shrugs off the hits, all 4 of them! 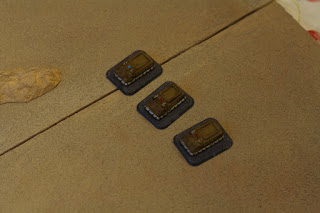 Next to activate was the infantry battlegroup. Now they get to roll another morale roll, they succeed and have regrouped. They now enter enter the battle from their deployment zone and take a full move. Regrouping units will in some cases be able to rejoin the battle closer to their commander, depending on the assests available to their commander. 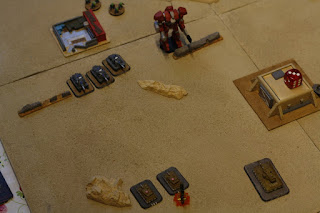 The behemoth tries to take out the Sohei, but it's rail cannon seems to be missaligned, and it misses. (He kept hitting nothing with the railcannon all game)
The Bizon tanks are having better luck, and another NIJA medium tank blows up from heavy machinegun fire. 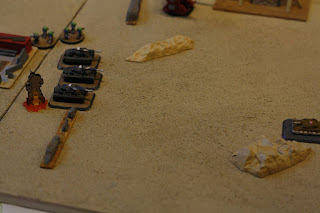 This is the only image from the 4th round, simply because it was the only successful attack all round. The lone Shaman blows up one of the Bizons in retaliation for his own losses. the score is now NIJA 4 USS 3, since the USS commander managed to contest the middle objective. 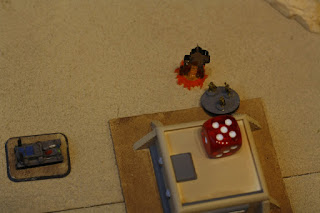 Start of the 5th round. Score: NIJA 5 USS 4. The commanders face off, and not too surprisingly, the USS commander in his apc chews through the NIJA infantry commander. 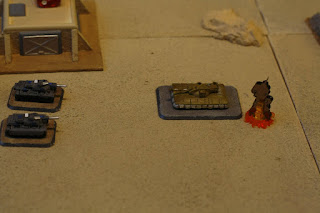 The Bizons surge forward, intent on destrying the Sohei that their own behemoth failed to take out so far. Thet have more luck, and a series of explosions wrack the tank as the shells punch through its dented hull. 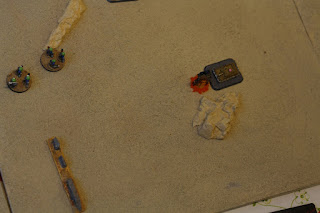 Taking their first and only offensive action of the game, the USS power armor open up on the last NIJA tank with all they've got. One missile finds it's target, and the tank is no more. The USS infantry finally manages to regroup, and the NIJA infantry that's held the rightmost objective detach a unit to try and contest the middle objective. 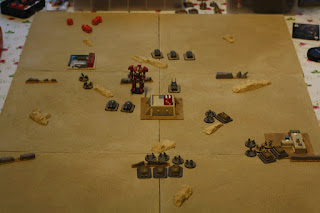 Start of the final turn. Scores are NIJA 6 USS 5. 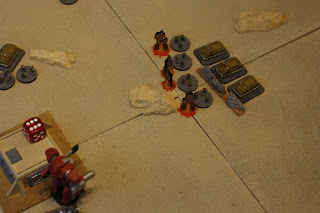 The behemoth stalks forward, its enormous hail cannon hosing the recently regrouped NIJA infantry. The entire infantry unit is taken out! Only the apcs remain. 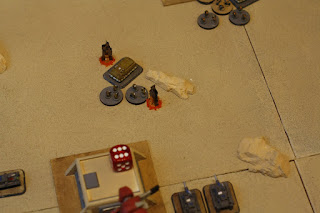 The Bizons swing around the building, blowing up an apc before laying into the infantry with their machineguns. Just one infantry stand is left, but he doesn't fret. 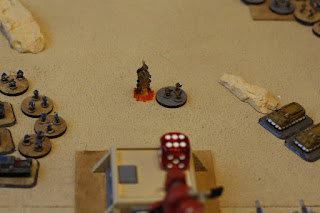 Before he has a chance to activate the USS commander trains his guns on the lone infantry stand, ending his opportunity for a defiant last stand. 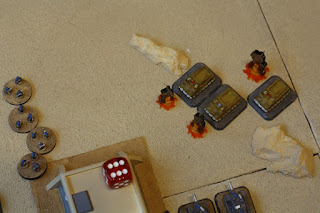 The regrouped infantry of the USS move forward, aiming for the last remaining apcs contesting the objective. Their rockets fly true, and every one of the apcs are scrapped! 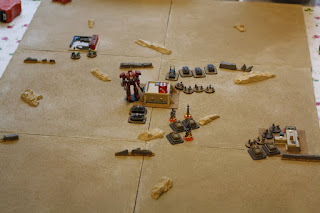 At the end of the round, the score ends up being NIJA 7 USS 7, the forces have fought to a stalemate.

The USS did suffer less casualties, but that doesn't always matter. If not for the lucky shots of the USS infantry, the NIJA would have contested the last objective and therefore won.
A close fought battle and a lot of fun!

I have another game of Laserstorm to share with you, and a few shots of my first game with the big stompy robots I just painted, all of them this time, not only the behemoth on loan to the USS!

Til next time!
Posted by Alexander Wasberg at 23:44