Save the scout! A Horizon Wars AAR


The Udouu system is technically part of Unity, as all human settlements in explored space. But like many systems on the fringe it's payed little attention by the core worlds. Add to that the fact that it's an unsanctioned colony with no offical Unity presence, you can begin to understand how the sqaubbling of these single-system powers have escaped notice.

With fewer than a dozen inhabitable planets and moons, Udouu isn't a poor system by any stretch, but it's too far away for most of the mega corps to involve themselves.

This has led to there being a few local powers fighting with what would be considered obsolete tech, even from many fringers prespective. Without wide-spread access to Unity tech there is little fusion tech on Udouu prime, the largest habitable planet in the system. As you go down in size and importance, the technological resources available to the locals decrease as well.

Necessity being the mother of all invention, the inhabitants have managed to create surprisingly efficient combustion engines, able to run on virtually any fuel. The lack of advanced armor materials and shielding have caused their warmachines to emphasize speed and manuverability over heavy armor, leading to the almost universal use of small bipedal mecha.
These suits are straddling the line between armored suits and true mecha, allowing for pilots to be trained quickly as it's operation is little different from using their own body.

On Udouu Prime, or just Prime (as the locals usually refer to it), there are two major factions:
The Northern Alliance and the Confederation of Southern states.
As the names indicate they hold roughly half of the planets single continent each, with a strip of uninhabitable desert and a great lake forming the natural boundry between the powers. The remainder of the planets landmass is spread out in small island chains dotted around the great sea.

The Alliance and the Confederation are in an almost constant conflict that sometimes blossoms into full-blown war, but for the most part there are little more than border skirmishes and raids followed by political condemnation and finally attempts at reaching a lasting peace that inevitably seems to break down. And so the wheel keeps turning.

A scout had failed to report in at a stretch of the border that was recently in dispute between the Alliance and the Confederation. The local Alliance commander was feeling the pressure, so he sent out the newly formed Red Cap squad and a sniper team to investigate:

Red Caps, distinguishable by their red heads and white shoulder stripe. The sniper can be seen sporting a orange fin on his head while the spotter has no distinguishing marks. 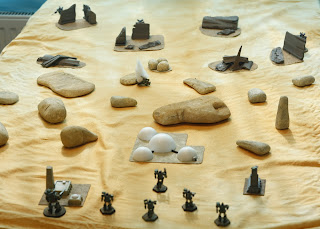 In the distance the Alliance pilots can see a pillar of smoke rising. It doesn't bode well for their mission.. 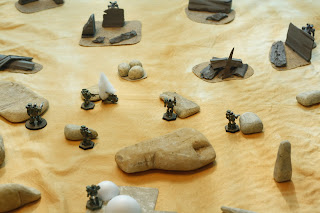 They all advance together, taking up whatever defensible positions they can. 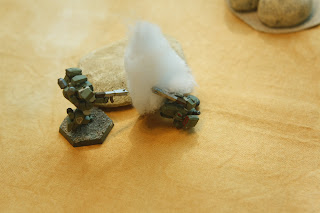 The smoke is indeed coming from the downed scout mech! The sniper team spotter moves closer to try and see if the pilot made it. As he approaches, a voice comes over his local comms: "I have important information for Alliance command, you need to get me to them!"
Suddenly all of the Alliance mechs sensors go off, it's an ambush! 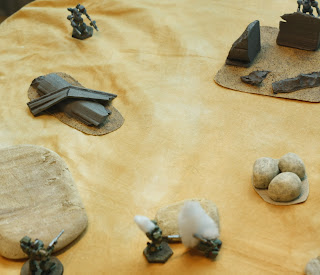 The Confederate mechs must have been in low-power mode, waiting to spring the trap. A mech comes barreling out from behind some ruins, it's rotary gun chewing chunks of armor out of the spotter's mech! 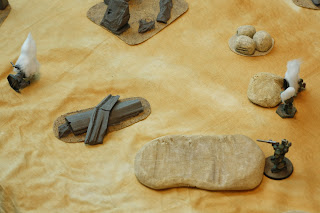 With quick reflexes, the pilot of the Red Cap's heavy mech pivots and fire his auto-cannon. The large shells strike the enemy mech head-on, blowing out the reactor and stopping it dead. 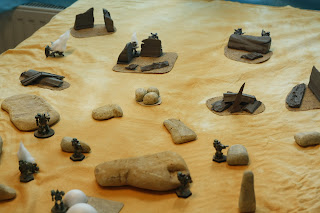 The spotter begins to drag the wounded mech to safety when he realizes that the pilot is stuck inside. They'll have tools back at the hangar to cut him out of there, if he can only get that far!
Another of the Red Caps cause some damage as his bazooka shot cracks open a fair bit of the armor of a mech hiding in the ruins. 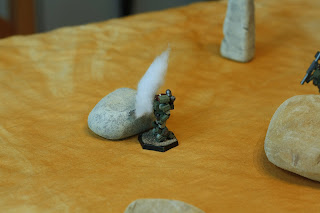 With his agressor out of reach, the wounded confederate pilot targets another of the squad, his shots messing up one of the leg actuators on his target. 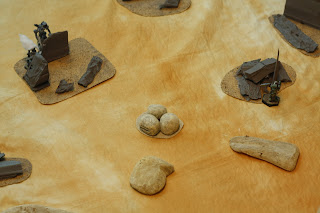 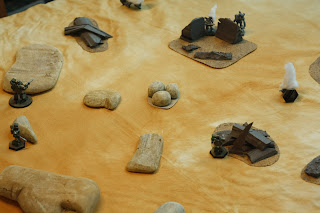 Explosive shots blow sand and rock into the air as the last of the Red Caps narrowly avoids some bazooka fire from a mech speeding towards him. 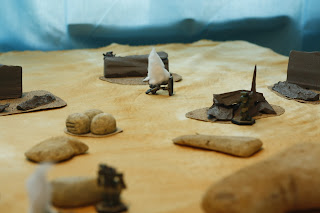 He takes careful aim with his own rifle and sends a stream of penetrator rounds through both the legs and cockpit of the offending mech, bringing it down! 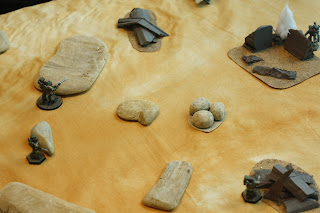 Feeling lucky, he then takes aim at the already damaged mech hiding in the ruins. Most of the shots ricochet harmlessly off the ruins, but some find their mark and the mech topples over, defeated. 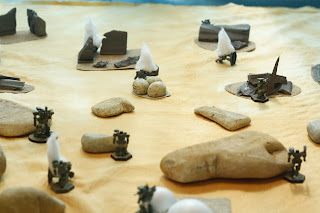 Seeking to stop the enemy from recovering their downed pilot, one of the few remaining Confederate pilots charge towards the Alliance line. Hitting a scout mech is hard given their size and made no easier by having to dodge incoming fire. As he dodges and weaves, the Alliance sniper adds his deadly precision fire to the barrage, bringing the mech to permanent stop. 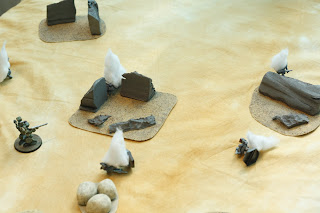 With little opposition left, the Red Cap heavy moves forward, his auto cannon stitching a pattern into the ruins as well as the mech trying to hug it for cover. 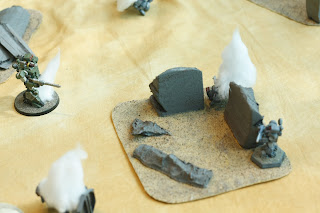 Hoping to take down the enemy heavy, the mech zooms between cover, laying down a hail of fire. The bullets rip through the tracks on one of the Red Cap mech's leg, shredding them! 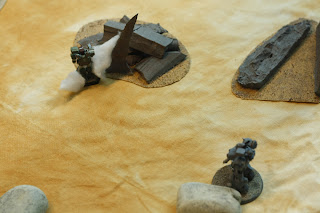 Finally the last Confederate mech reveals itself! As it charges out of it's hiding place, the pilot opens up with both cannon and rockets, blasting most of the armor off of the unsuspecting Red Cap mech! 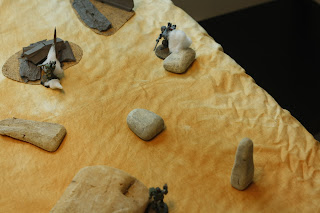 Eager to help his squad-mate, the bazooka-wielding mech sends a explosive shot right at the Confederate heavy, almost blowing it's arm off! 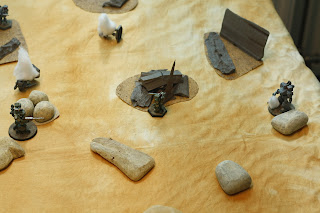 The heavy mech disengages from the remaining Confederate light mech to support his squad and fires a few shots into the leg actuators of the heavy mech. 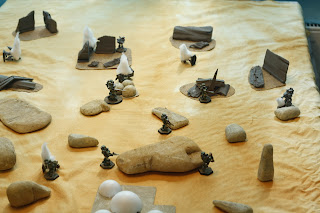 Realizing that they cant stop the scout's pilot from being rescued, the Confederate commanders give the order to pull back, they have lost enough good pilots today! 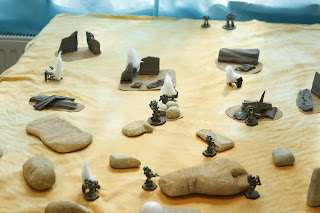 Both remaining mechs fire suppresive fire and deploy smoke grenades to cover their retreat. Alliance command orders their pilots to bring back the scout pilot, pursuit is not a priority. 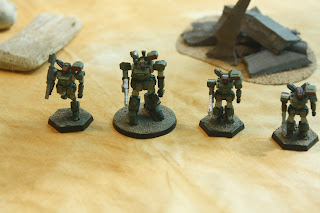 A slightly better picture of the mechs of Red Cap squad. You might be seeing more of these guys in the future!

That was an overwhelming victory for the Alliance, the dice really wasn't with the Confederate pilots!

I hope you have enjoyed this little report, I have a few ideas for future scenarios and there might even be some RPG-lite campaign focused around the members of Red Cap squad coming up!

Posted by Alexander Wasberg at 23:46 2 comments: