Episode 1: Race across the desert; a Clash on the Fringe Campaign AAR


They had been heading north, that's all he knew at this point. The nomads who had robbed the Unity bank had left on foot, but they had almost a days head start.

Clarke sighed, this just wasn't going to be easy. 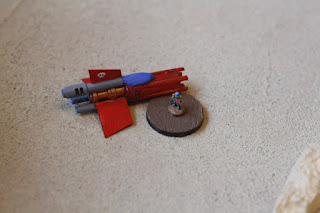 Getting into his speeder, nicknamed "the red death", he shot off over the horizon.

The vehicle that had helped lift the loot had also left tracks for him to follow, at least that's something, he mused.
Churchill 7 was mostly desert, with the exeption of the polar regions which contained most of the arable land and therefore fed the rest.


As he sped along the desert dunes, something started to appear, slowly creeping over the horizon. When he got closer, he realized it was one of the huge sand-crawlers, the public transport behemoths that until recently ferried him across this dustbowl.

Something must have broken, as it so often does, since the lumbering crawler was still. Door were flung open, and people was waiting in the shade, hoping they wouldn't be hit by raiders during the stop.
On a hunch, Clarke came to a stop, right next to a group of merchants desperately trying to cool themselves with some sort of chilled drink.
The second he popped the hatch and exited his speeder he was hit with a scent he hadn't thought to find here, so he approached the merchants.

"A bad day for a breakdown, gentlemen" he said. "Aye, I swear, these rust-buckets just keeps getting worse and the ticket prices keeps increasing" one of them exclaimed.
"I was hoping you could tell me were you found whatever it is you're drinking, I'm dryer than these dunes" Clarke gestured all around him. "You might find it in the 2nd storage bay, a fellow by the name if Rik"
"Much obliged, gentlemen" And with that, Clarke set off, to find this Rik. 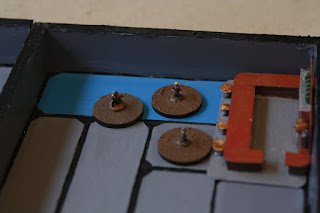 As he turned the corner into storage bay 2, the overwhelming smell of Deema beer was in the air, so he knew he was in the right place.
Behind the counter was a big man in a red shirt, a look of surprise on his gentle face.
"Officer, I do have a permit for this, it's not what it looks like!" he blurted out. The man at the bar, a silver haired older gentleman only chuckled.
"You fall for this every time Rik, that's not an officer, it's Clarke you dimwit."

Straining his eyes for a moment, Rik then visibly relaxed once he'd confirmed what the other man said. "Damn you Clarke, you get me every time" he mumbled sullenly.  "One of these days you'll get caught you know, Deema beer is not the safest thing to sell."
"But it is the most profitable" His face lit up. "Comon' over here, have a glas, it's on the house!"
Clarke took the offered drink, and downed it in one go.

"I know you usually keep your ear to the ground and I need some information. I'm guessing by now you've heard of the robbery south of here that happened yesterday?"
"Yup, got a good haul too. I might know something, but you'll owe me one, deal?
"Deal. Now what have you heard?"
"A truck with 3 nomads and something hidden under a tarp was speeding past us at a canyon not far back. It looked like they were heading for Prosperity."
"Prosperity?"
"Yup, Prosperity. A small speck on the map, just a few residents and a natural gas plant, but they have a landingpad big enough for bulk haulers. Keeps them for having to go overland to the bigger spaceports. That's my best bet for where they was headin'."

Finally, a tangiable lead. Clarke said his goodbyes and once again blasted off across the dunes, now with a target in mind. Prosperity. 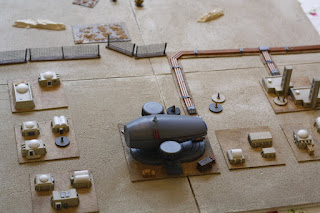 Meanwhile, in the small settlement known as Prosperity: 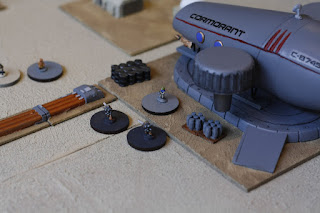 Two nomads are arguing with the local customs official.
It seems he doesn't feel they should be leaving their landing pad without the proper taxes and fees being paid, or leave without filling out the correct Unity standard forms, SDTT-1 through 27.
The argument goes back and forth without really leading anywhere, untill the nomads hears a low rumbling and their comms start up:

"long range sensors have picked up our comrades, they will be here shortly. One more unknown craft is on approach vector, be ready to depart immediately!" then their comms goes silent again. 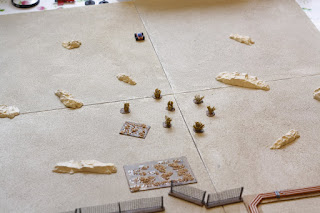 Trailing a cloud of dust and smoke, the Bullfrog pickup arrives first, having dropped the nomads to increase his speed. 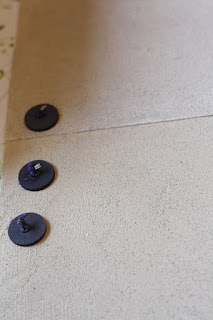 Not far behind, the three survivors from the bank heist come trudging into the outskirts of Prosperity.

They know that their pursuer isn't far behind, they can hear the low-piched whine of the anti-grav drives getting ever closer.

Checking their weapons, they get ready for another fight.

Now in range of the short-range comms of the Cormorant, the comms of the robbers also start picking up the flight crew:
"Preflight checks are green, Warming up engines and stabilizing plasma core. 10 minutes til take off."

They have made it this far, now it's just the final run up to the ship and they are free. 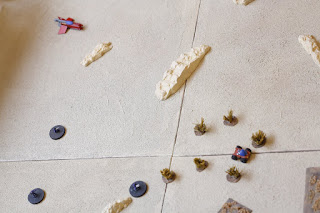 The whine of the anti-grav engines grow louder and louder, their pursuer is almost upon them!

Finding strenght in their desperation, they trudge as fast as the loose sand will let them, keeping a watchful eye on the horizon. 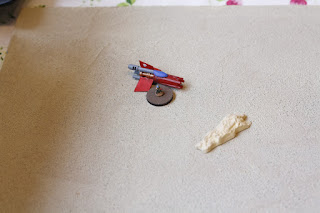 Suddenly it tears over the horizon, hurtling towards them at a reckless pace.

Taking a second to survey the scene with hos own eye rather than the sensors of the speeder, Clarke jumps out of the cockpit and lands on the dusty desert floor.

His prey is in front of him and he flashes a grim smile.. 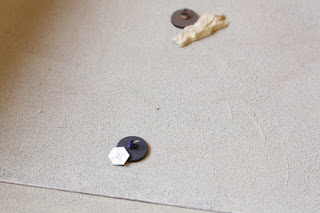 Immediately bullets start flying his way and with reflexes gained from relentless training, he quickly dives into cover amongst the rocks.

He closest nomad firest bursts of his gel-rounds, the shells harmlessly disintergrating against the rocks. His weapon clicks, the magazine dry. Clarke pops out of his cover, gauss rifle at the ready. A trio of bullets hits the reloading nomad like a sledgehammer, neutralizing him. 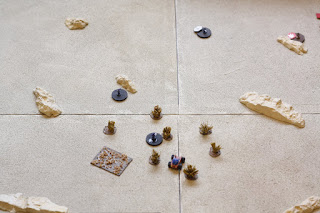 
The remaining nomads take the chance to move into cover, slowly closing on their ship. 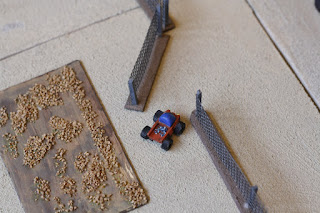 Revving the engine, the pickup reaches the gates of Prosperity unharmed. 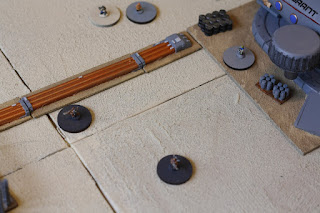 After a few more attempts at subtle persuasion, the nomads guarding the ship gives up and threatens physical harm to the tax collector.


This finally goes their way, as the official starts shouting orders for the workers to help finish loading the ship. 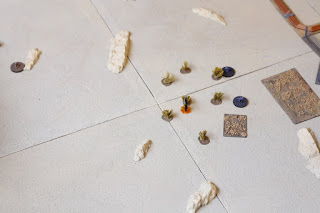 Daring to take another shot, Clarke squeezes a few bursts into the high dry grass, but the shots go wide. 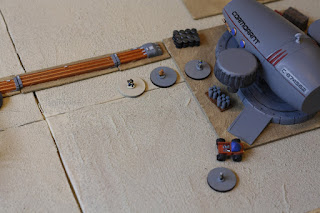 The worker are starting to converge on the Cormorant, getting ready to load up the goods from the pickup that just darted in on squealing tires. 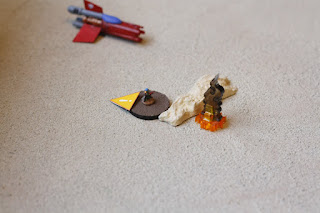 Aiming to keep Clarke away for long enough to affect their escape, The nomad carrying a machinegun lets it rip.

A near miss scratches the suit, causing Clarke to become stressed. 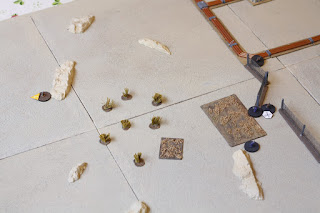 The robbers keep falling back towards the gate, at the same time the guard from the ship rushes forward to keep up the supressing fire.

Clarke is not one to give up however.. 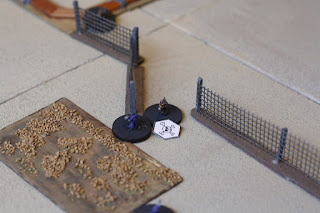 .. He manuvers to the edge of the rocks to get a better shot, and then he fires.

The heavy gauss rounds fall thickly around the gate, knocking up dust and chewing into the gates. One of the guards isn't quick enough when his comrade drops to avoid the incoming fire and one bullets goes right through his face plate.

He falls down, dead before he hits the ground. 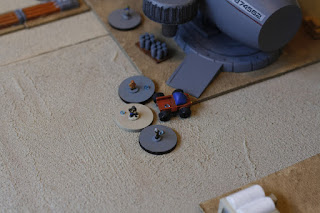 The local workers grab a chunk of mineral each and start going up the ramp. 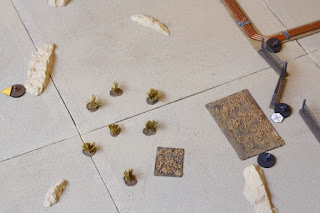 It was do or die time for Clarke, he can see the robbers getting closer to the fence and their freedom.


So he jumps over his cover, dodging through the incoming gel-rounds and gauss projectiles to slam into cover next to the next set of rocks. 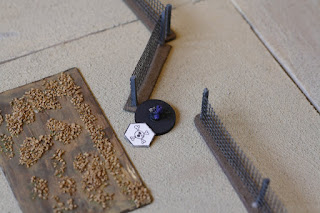 As he dives for cover, he fires off a salvo, hoping to at least pin some of his marks.
The rounds jump through the dry grass, a few of them hitting the fence posts, creating an loud ringing, almost drowned out by the recently started engines of the Cormorant.

One round does hit it's mark and the machinegunner goes down with a low groan. 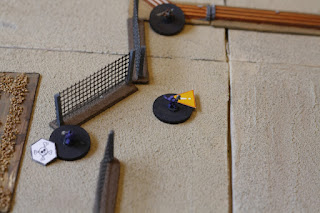 The stress of seeing both his partners in crime gunned down is getting to the remaining nomad, he forgets himself for a moment when he stands and screams a long line of profanities at the pursuing bounty hunter. 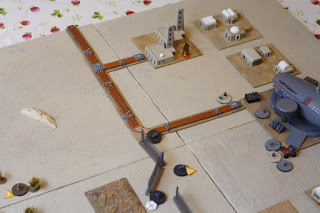 Clarke laughs, knowing he's gotten to his mark. That's good he thinks, get mad, make a mistake.
He then sprints across the open ground into the dry grass, dodging more gauss fire as he goes.   His intended target is in a tricky position, so he grabs a grenade, hoping to clip him with the blast. As it happens, the grenade bounces and goes far off target, showering the empty factories with shrapnel. Oops! 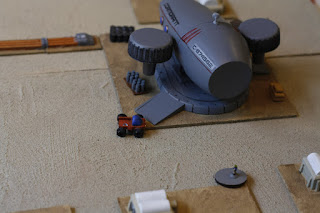 The workers have now loaded all but a single piece of the precious minerals. Time is running out for our hero! 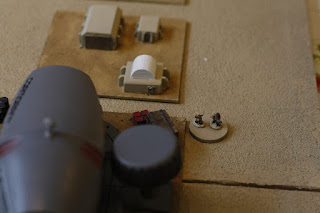 The last group of workers along with the official runs for cover as the grenade goes off. They didn't sign up for this! 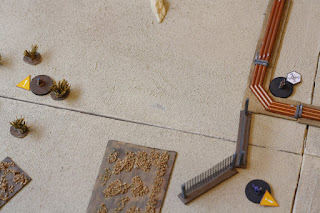 "Keep him off our tail for another minute, we are almost loaded and ready to go!" the ship guards comms unit then goes quiet again. He moves behind the pipes, firing at Clarke but missing due to the high grass hiding him. 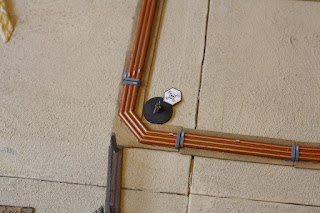 Since his attempt at flushing out the guard went a bit pear-shaped, Clarke decided to trust his aim with the rifle instead.

Switching to single-shot, Clarke lined up his sights on the guard. Taking a deep breath, he squeezed the trigger. The shot punched trough the guards breastplate, a wheezing noise was all that escaped his lips before he fell. 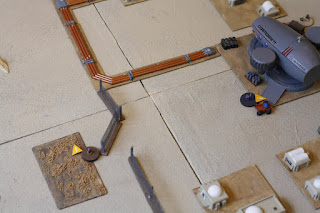 Clarke then got to his feet, running for the fence.
The Cormorant's engines now let out a roar, the plasma core stabilized.
Grabbing the last piece of mineral from the truckbed, the exhausted nomad stumble up the ramp, pounding the fusilage with his fist. "Get this bird in the air, quick" he shouts, his voice drowned out by the jets. 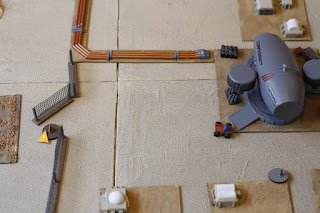 Clarke passes through the gate at this moment, seeing his prey escaping his grasp.
"Fuck!"
With a blast, the jets pushes the ship up into the air, the noise deafening. 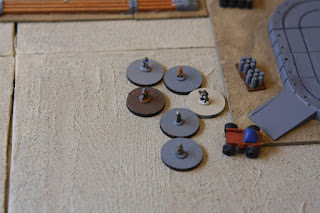 "Is there anything you can tell me about the destination of the ship? Anything at all?" A frustrated Clarke asked the assembled work crew. "And why did you let them leave?" he added, to no one in particular.
"What would you have us do, oppose them just to get killed? Sorry stranger, we aint' non too eager to die." Replied a hard-looking man.

The young one in the orange poncho steps forward: "I don't know if it helps, but one of the crew was talking about a space station when we loaded their goods. I don't remember the name though, I'm sorry." Said the little one meekishly.

"It helps more than you know, thank you" he replied.

So he had a chance and botched it, but it might not be too late. There are several space stations in orbit around the Churchill systems and if he could find it before they leave for the next system, he could still have a chance.

What will happen, will Clarke find the spaceship and will he find it in time?
Tune in next time to find out! 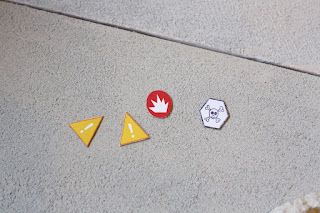 A quick post script, the new tokens I've made for Clash on the Fringe, from left to right: Stress tokens, Heads down/supression and finally Damage/Death tokens. A neat set, and thanks to my wife they actually came out better than my original idea!

Posted by Alexander Wasberg at 10:18