On a ship to the stars

As I make new episodes for the Saga of Clarke, or just play a stand-alone game of something else, I like to make an effort to have something new every time if I can.
This practice can sometimes be challenging with the limited time I usually allow myself between games, but I find it makes it more interesting for me and hopefully for any reader as well!

I also try to fill typical sci-fi must-haves, such as space stations and spaceships, alien worlds and so on.

The second location is what this post if all about, as I recently finished up a few spaceship tiles for my sci-fi gaming: 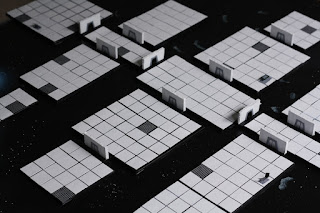 I want to start out by saying that this is in no way my own idea, but rather a frankensteinian creation inspired by several different paper-craft products, commercially available tiles and some inspiration from fellow bloggers like Yoshimi over at his blog, Daxio's Uneventful Day, check it out! 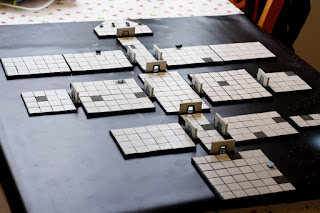 This is more or less all the tiles I made in this first batch. It's enough to cover most of the small to medium-sized ships I reckon I'll need to represent on the tabletop. Battlecrusiers and dreadnaughts and the like, if it ever comes to that, will have to be broken down into sections. 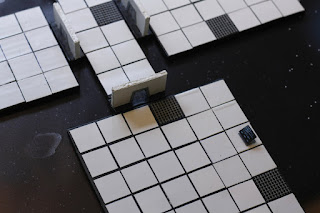 All the tiles are made from a double corrugated cardboard base with taped edges, sprayed black to disguise the corrugation and any minor flaws on the side of the tiles. The actual floor tiles are made from thin cardboard, like cereal boxes and similar containers, sprayed a light gray since I found white to be too stark. The floor-grates are more of the anti-skid netting I used for windows on my big buildings that I finished recently. 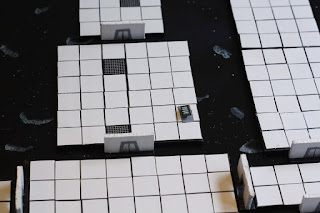 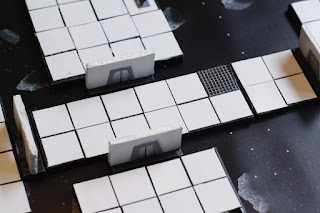 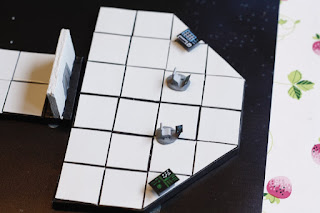 The bridge piece. I only made one of these special pieces, not thinking of the fact that a boarding action from ship to ship probably requires at least one more bridge piece. So I'll most likely make another one, or just use one of the straight 2x3 square ones if I get too lazy/caught up in the latest ooh shiny.. 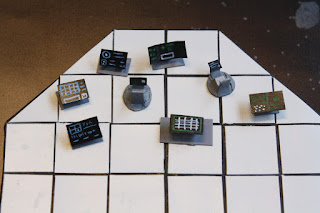 Obviously you can't have a spaceship devoid of any sort of equipment, so I made a few displays and panels, again more than a few inspired by Yoshimi, thanks man! 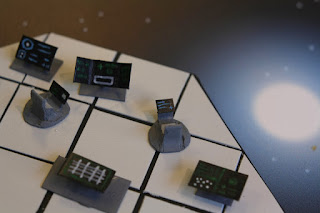 Seats for operating the engines and weapons, shields and such. I though of making some crash-couches as well, and I still might. 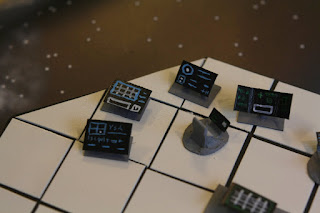 The displays can be used for all sorts of useful things, engieneering and shields, nav and map tables, comms and so on. 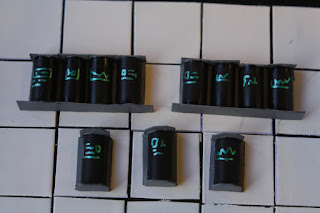 I made a few sets of stasis-pods, somewhere for crews to rest during longer flights when stimulants aren't enough to keep them going the full journey. They are just bits of chopped up drinking straws glued to another backing of thin card, but I feel they came out all right.


I also have a pic of the fully laid-out Stalker-class attack and patrol ship, manufactured by Sanada Heavy Industries: 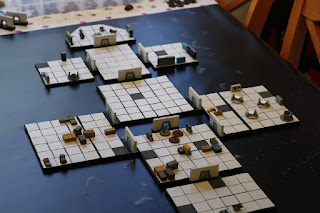 This particular craft goes by the name the Cormorant, it's the ship Clarke and his companions are after in the latest episode of the Saga of Clarke! More on this in a few days..

I've started work on a new terrain board, and have plans for a really special alien one, I'll share as soon as I have something recognizable!
By the end of next week I hope to have received my new battle armors from Ironwind Metals, then the work begins to paint up some more units for a VOTOMS/DOUGRAM-style mecha game.

Posted by Alexander Wasberg at 09:01