After the initial success of their raids, Burke's Iron Men started to feel the push-back from Zephyr.

Having pulled off a hit and run on a supply convoy, an all power armor detachment of IM infantry is falling back through the rocky desert badlands. They know that some sort of pursuit force must be coming for them, and before long a heavy mech and some tanks appear in the distance. 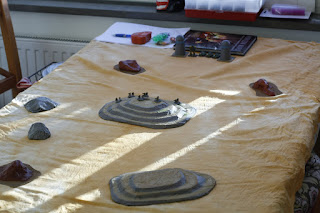 They will be upon the infantrymen soon and so the decision has been made for them, this will be a fighting retreat! 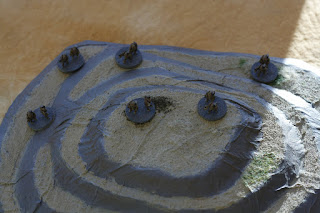 Six fireteams of the Iron Men power-armoured heavy infantry take up positions on the slopes of a terraced rock formation. 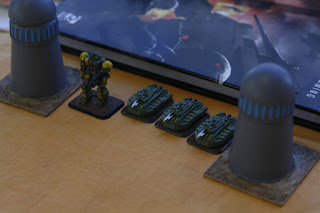 Passing between the last outpost towers, the Zephyr pursuit force is ready to run their enemy to the ground. 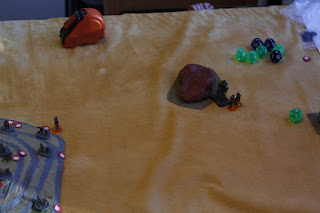 The very ground shake as the heavy footfalls of the mech takes it into cover by a large boulder. His heavy guns open up on the infantry, blowing great holes into the bedrock and pelting them with rock shrapnel. No less than three fireteams return fire, determined to discourage the warmachine from coming closer. Micro-rockets and shells strike the metal giant, temporarily disrupting his aim. 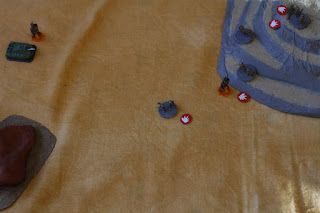 Moving to engage the besieged mech, one of the fireteams set out across the desert floor.

A heavy grav-tank moves up and fires at the ailing infantrymen targeted by the mech, further damaging them. 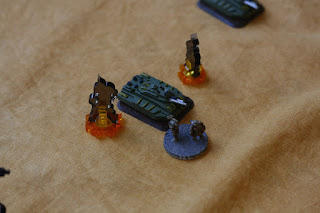 Seeing and opportunity to cause some real damage, the moving power armour changes direction, charging directly into the speeding tank, firing as they go.

A great thunderclap and the groaning of over-taxed metal can be heard as the heavy infantry´s assault eats through the vehicle and causes a fatal detonation. 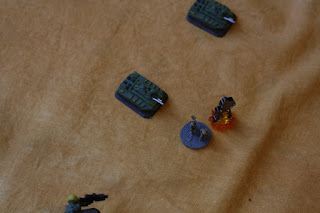 The victorious Iron Men´s celebration is short-lived however, as a second tank moves into point-blank range before firing all their weaponry. The already damaged suits can't take another beating like this, and the team fall, out of the fight. 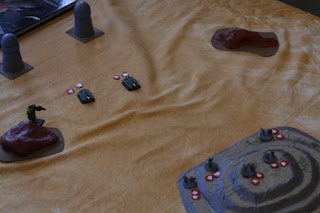 After the successful charge and subsequent defeat of their comrades, the remaining Iron Men dig in, aware that they couldn't outrun their pursuers, especially not with unit 2 heavily damaged. 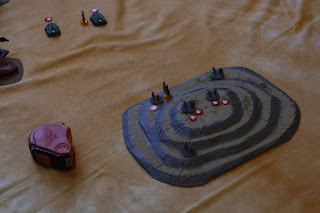 Adopting a more cautious approach, the tanks stand back and fire rather than risk another close combat with the deadly infantry. The dug-in infantry takes some damage from the fusillade, but return fire, giving as good as they get. 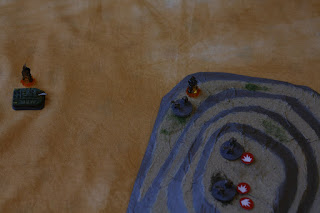 Growing bold one tank commander orders an advance, focusing fire on one of the more exposed infantry units.. 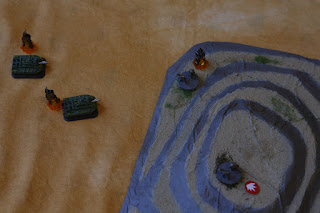 .. And soon the second tank follow suit, gunning it´s engines and firing as they go.

The targeted unit is withering under the barrage of lasers and bullets, but they hold.. 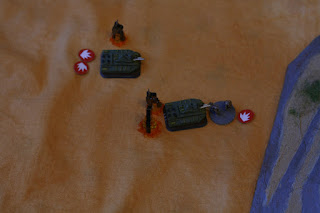 ..Until they get close enough! With a roar, the infantry charges into the fire, trusting their armour and speed to keep them safe. Landing on the tank, the unit proceeds to rip it apart with their enhanced strenght, shooting and smashing the tank point blank. The vehicle shudders and drops to the ground as the power finally fails. Another tank down! 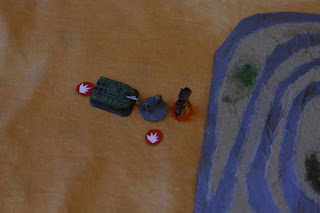 Using it's bulk, the last tank avenges it's fallen comrade in short order, running over the remaining few heavy infantry, but not before they dent the last tank some as well. 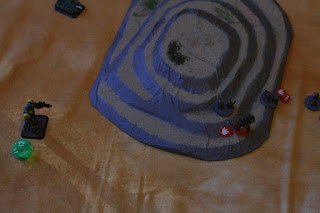 Not wanting to waste their comrades sacrifice, the entrenched infantry starts falling back, putting the rocks between them and their hunters. Disaster strikes for the rearguard as the Zephyr mech catches up, the already damaged suits can't shield their charges from the intense damage from the many guns of the mecha. 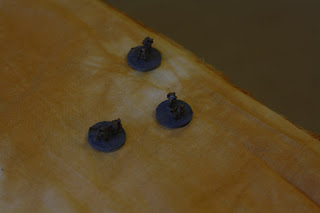 With most of their pursuers damaged and destroyed, the remainder of the infantry manage to escape as the hunters break off pursuit to begin rescue and recovery as well as POW securement on the battlefield.

Again Burke´s Iron Men have pulled off a tough operation, yet it came at a high cost to both sides, with roughly 50 % of combatants ineffective on both sides.

I ran this scenario to test out just how well infantry would to against armour without any air or armoured support of their own. Safe to say, they are still a real threat! If they had been caught in the open, or fighting in a populated area I think the results would have swung widely in favor of one side or the other, but even so they did a good job.

I have a few ideas for games I'd like to play, so in the next few weeks I hope to come to a decision and have another AAR or two for you. Meanwhile I'm most likely going to make a few bits and pieces of terrain, and maybe some more figures as well.

Posted by Alexander Wasberg at 00:42 2 comments:


Having been kept away from the blog due to a mix of work and a great video game fall line-up, I have now finally returned. When I left things a few months back I had started painting up some of Sayiner Micro Toys lovely pieces, so I felt it only proper to finish them before anything else was started:

The complete haul. A NTC Warrior mech stand in for size reference. 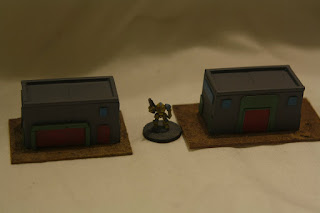 A group of warehouses. What does these steel boxes hide? 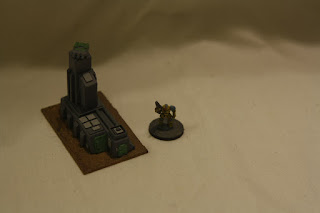 Another military compound, because I like the look of this structure. This particular one comes with a long tower topped with a multi-barreled cannon. 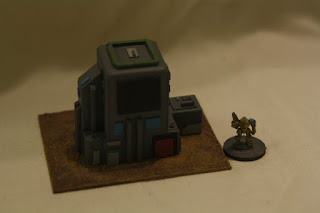 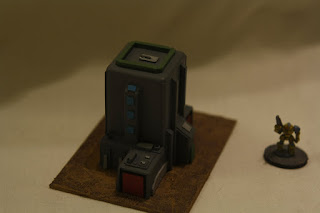 A administrative building. It could be the seat of local government or maybe an office-block for civilian or military use. 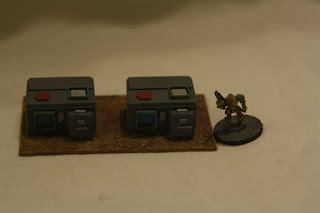 These hab-modules are commonplace, used to house both supplies and men, civilian and military. 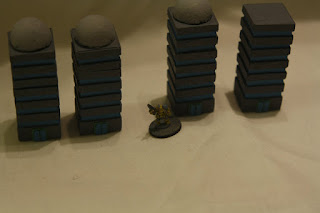 For the less fortunate as well as a myriad of officeworkers, these highrise complexes is where they spend their days. 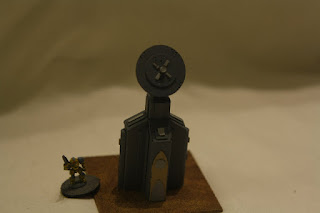 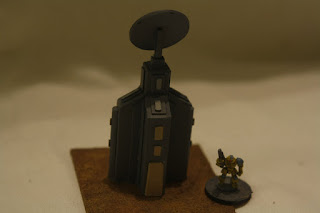 A Sat-com facility, allowing a colony or outpost to communicate with the rest of the planet as well as far-away worlds through ships and relays in orbit. This also makes them a priority target during conflicts. 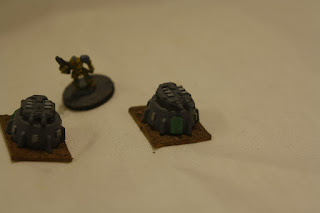 Last but not least we have some emplaced guns. Little more than a ferrocrete bunker with a double-barreled gun on top, these static defences are usually reserved for spaceports and other important installations.

I have a few ideas for some games that I hope to get into, and I hope to share these with you soon!

Til next time!
Posted by Alexander Wasberg at 22:24 2 comments: