Getting started is always the hardest part for me, so after last week's post it didn't take too long to finish up the WiP's I showed off and so here they are: 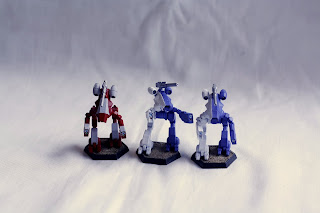 First the Battlemechs, Steel Warrior Studios Bullsharks (an interpretation of the classic Marauder)
As an added bonus, I finally settled on a color scheme for my mercs. 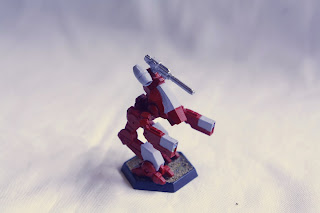 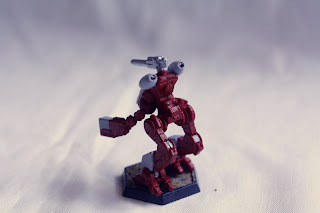 The yet unnamed merc company's first mech. Avoiding my go-to of "grey and something" I just decided to lift one of the NIJA/Sanada megacorp colors (one of my fringe-verse factions for those who haven't looked around this blog too much ) for my mercs. 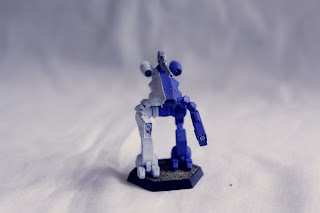 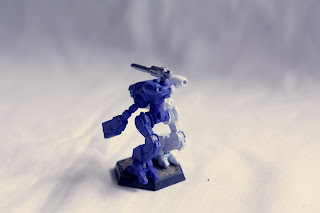 The two remaining mechs will form one half of the 2nd Lyran Guard lance, together with another heavy and possibly an assault mech.


My Shapeways mechs managed to get some attention as well, all 4 being completed the following evening. 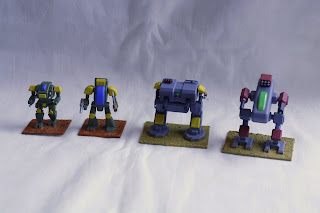 A mixed bag of color schemes, but every single mech looks better with paint than before it, so that's a win in and of itself! 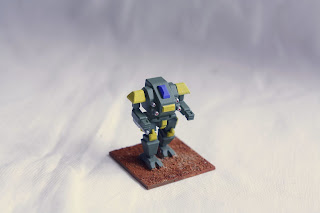 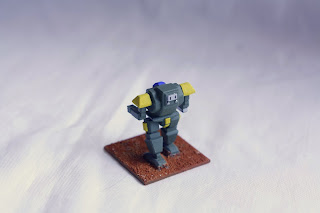 This first one was designed with mostly Battletech influences and painted to fit in with my Zephyr megacorp's forces. 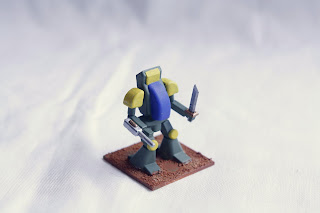 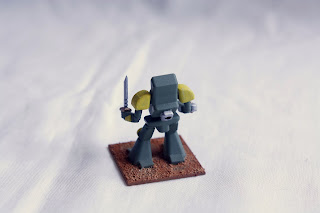 Joining the same ranks as the first one with a matching paintjob, I'm a bit torn about the design of this one. Taking some inspiration from eldar Wraithlords and "battlemeching" it up, I think I might try re-designing this one at some point. 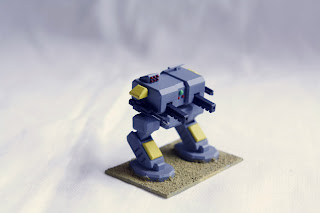 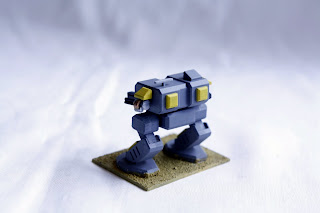 Not really painted up to belong anywhere in particular, the mech I titled "Boxmonster" is really supposed to stand out and I think that it manages that job pretty good. I got the inspiration from a LEGO mech I saw online, so the neat design is only partly my doing. That being said, I'm quite pleased with this one! 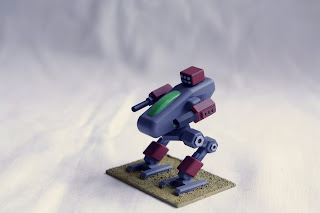 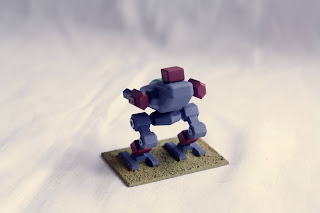 The last mech was my attempt at making a more clan-like battlemech, inspired by the Cauldron-born and similar designs. I'm not 100% happy with it, but for a first print it's acceptable. It's painted up to join the Warg Industries merc company.

These first prints have been fun to make, it's really cool to have something you designed on your computer as a real-life object in your hand. If I ever make any more, which is likely, it's also been good experience and hopefully I can do better next time around!

Finally I have the results of my recent attempt at using hot-wire cutters to shape some terrain. I decided to start with something basic that you can almost never have too much of; 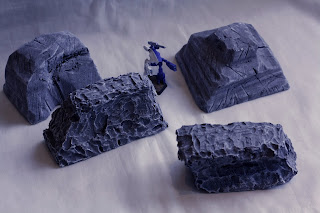 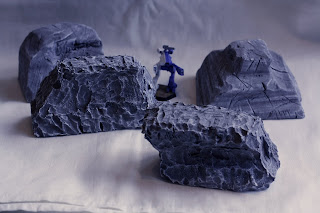 The two smoother ones in the back is just shaped with the wire cutter and then had extra grooves and details made by a knife. The two in the forground were carved out as more or less straight blocks, but then I used a heated blade not too dissimilar to a soldering iron to create the textured surface.

After painting a base layer of grey on the pieces I just drybrushed it in a few stages some to give a more worn look.

I have started thinking about making some more elaborate pieces now that I have a bit more experience trying to shape the material. We'll see what happens.

The next batch of battlemechs have been basecoated and are drying as I write this.

I'm also tinkering with Starport Scum a bit to have some mech and possibly combined arms battles using the system. I just love the versatility of the ruleset and hopefully it will allow me to have quick and quick battles with an adjustable level of detail.

Posted by Alexander Wasberg at 03:49 2 comments:

Shapeways mechs in the flesh and more BT WiP

With lots of things fighting for my attention I haven't been able to make the time to pick up a brush before yesterday.

I'm hoping to change that and get some more work done, maybe even play a game or two in the coming weeks! 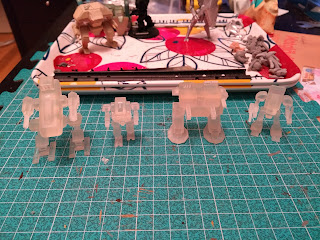 They are finally here, my first ever 3d-sculpted mechs. The image isn't great and the FUD doesn't really help the definition, but I hope to have some paint on them before long. 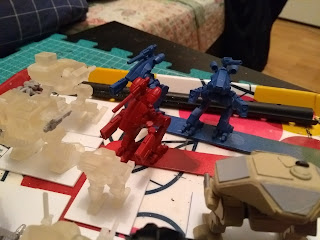 I also received my Bullshark minis from Steel Warrior studios. These mechs are a beautiful redesign of the original BT Marauder, itself based on the Macross Glaug. Two of them are going to join the earlier offerings as Lyran guard, with the last one either becoming a Kurita or Merc mech, as soon as I can decide on which I prefer..

That's all I had for now, but some simple pieces of terrain and such are soon ready for the camera, I hope to show them to you soon!

Til next time!
Posted by Alexander Wasberg at 21:34 2 comments: