Earlier this week the powers that be finally got the local post office to deliver my copy of Horizon Wars.
Needless to say, I've spent the week prepping for my first game and so here we are!

With border skirmishes and general saber-ratteling increasing between the USS and the NIJA, the former decided to increase their presence in the border systems. 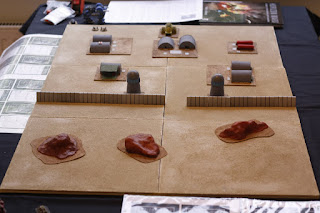 This newly re-staffed USS outpost is about to be attacked. In an effort to probe enemy defences as well as to screen a larger offensive, the NIJA scout company was ordered to divert some assets for this mission. 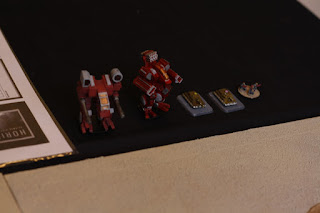 The Imperial attackers, two P2 mechs, the left one being the CHQ, along with light and heavy cavalry and a unit of mobile infantry.  The hope of the imperial high command is to destroy the outposts fusion generator, in addition to learning enemy strenghts in the area. 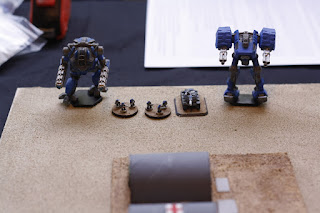 The USS base defenders, a P3 marauder mecha, two units of light foot, a heavy cavalry element and a P2 CHQ mech. 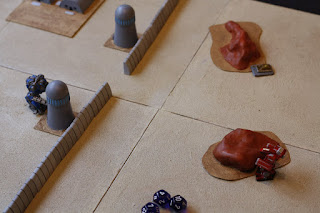 Both mechs receive light damage to their mobility, but are still very much in the fight. 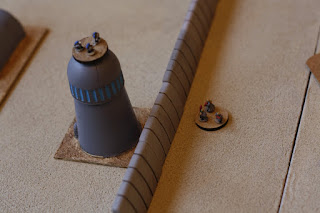 Imperial mobile infantry is quick to retaliate, but their dug in opponents are unfazed by their attack. 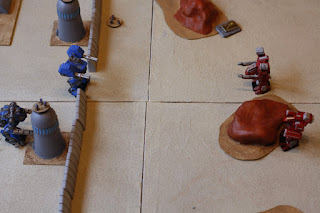 Adamant to keep the attackers out of the base, the USS commander moves up to block the entrance and lends his fire to that of the heavy mech. Concentrating their fire, the imperial commanders mech and the light cavalry unit inflict several telling wounds on the enemy commander. Armour comes off the armoured behemoth in big chunks, exposing critical systems. But he is still in the fight.. 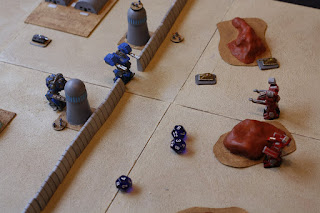 End of the first turn. Both sides have savaged eachothers mechs, but so far the USS is giving better than they get. 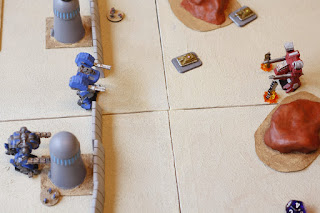 Stealing a page from the attackers playbook, both USS mechs concentrate their fire on the imperial commander, even as the other mech launches barrages of rockets into the USS CHQ. 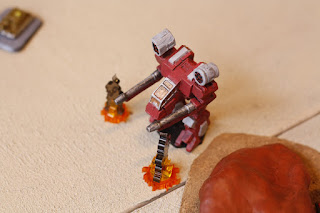 The volume of fire, and ferocity of the Marauders particle cannons, is too fierce for the imperial CHQ.

With a deafening bang, the mech crashes to the ground, even as it's internal magazines erupt. 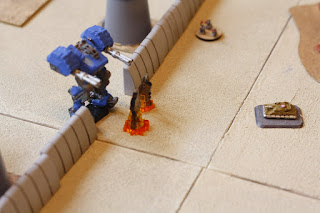 Even as the commander falls, his troops focus their fire on his target. Determined to avenge him, cavalry and the remaining mech rain explosive death on the CHQ.

His wounds beginning to tell, the USS commander tries to momentarily stave off critical systems failiure, but just as he gets some motive function back, a shell from the enemy cavalry element rips through a opening in the armour. The metal giant crumples, like a puppet with it's strings cut! 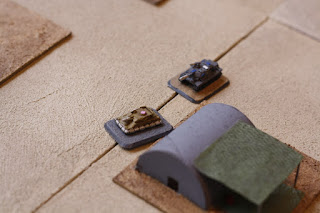 With the way into the base at least partially open, the imperials light hovertank guns the engines and makes it inside the base and into the relative safety of a quonset, out of the line of fire from the towers. The crews celebration is cut short however, when the heavy cavalry element catches up to them. AT rounds and machinegun fire tears at the armour of the light tank, denting the steel plates and ripping gashes in the armoured skirt. 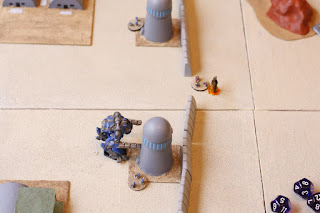 Following the path opened by the tank, imperial mobile infantry is not far behind. As they enter the gates they come face to face with the heavy mech.
As they are inside his reach, they fire without suffering any in return. Dented armour and chipped paint is their only reward.
They'd not counted on the enemy soldiers in the towers being able to fire at them with much efficiency, an error they realized far too late. Before they could speed past the gates, they are gunned down! 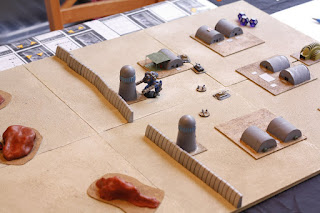 Knowing that the mission is almost lost, the imperial heavy cavalry charges through the gates, firing shell after shell at the generator at the far end of the base. 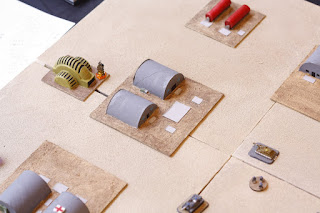 The USS foot follow the now unsupported tank into the open, throwing grenades and firing AT rockets.
Tracks shatter, armour ruptures and the tank skid to a halt, but the crew keeps firing round after round at the generator with zelous efficiency.

The Imperial light cavalry limps towards the generator, adding it's fire to the other tank's, heedless of the damage it's sustaining from it's enemies. 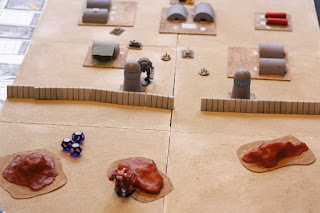 Still dueling with the marauder, the remaining imperial mech can see the writing on the wall. His comrades zealous devotion to the mission will not be in vain he wows, but he must report to his superiors, while his machine can still get out under it's own steam.

The generator is still functional, but it's damaged and those of his comrades that survived will be ransomed. The battle might be lost, but the war is far from over..


A victory for the USS, albeit a costly one. One mech out of action and another severly damaged. Worse still is the damage to the fusion generator. But they have prisoners, and the enemy mech might at least be stripped for parts. Hopefully this will make command realize the precarious situation they face in the border worlds...


My first game was a blast! Some tactical blunders and less than optimal choices aside, it was a good first outing. I've already started looking at more scenarioes for clashes between the USS and the NIJA, and a few other parties as well :)

I hope you've liked it, more and better things to follow!

Til next time!
Posted by Alexander Wasberg at 09:16