Having missed a few title releases from NWG while I had my impromptu hiatus, I decided to start with a new Fivecore variant, Fivecore Pulp.


On some unnamable planet, our hero, Nyland Smith, has finally found it! 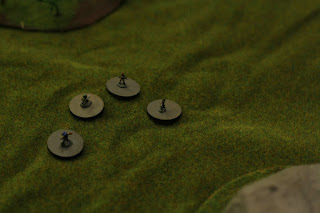 "It may look like any other cave, but this is the one I tell you!" He stated, not without a great deal of enthusiasm, to his local guides. The hirelings looked suspicious, but then they weren't trained in Xenoarcheology. 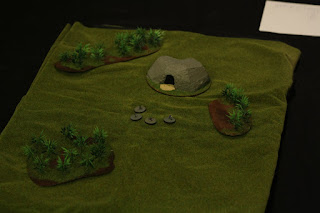 He could only hope that this really was it, and that his competitors hadn't beat him to it! 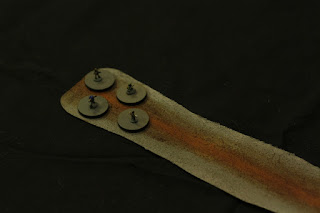 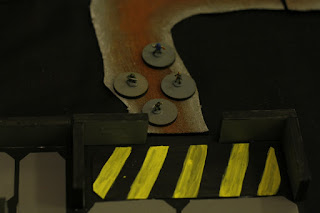 Making their way through the narrow passages, the party come upon a decidedly aftificial construction. He had been right, the treasure must be here! 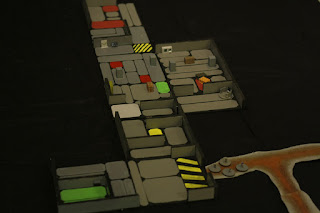 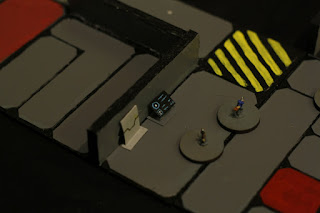 Searching through the abandoned facility, Nyland Smith and his followers come upon a locked blast door. After some time trying to pry it open, one of the locals summoned Smith to his side. "Sir, there is some panel here you see, it started up as soon as we started prying at the door. It has some strange symbols.."
"Let me see." Nyland checked over the panel, touching a few symbols he recognized. Somewhere, a power-cell hummed and the blast door suddenly shot open. 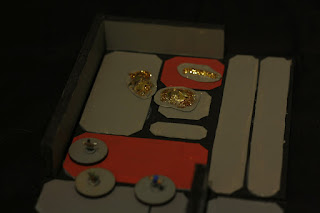 The they stepped in through the door, our hero saw that he had been correct. Inside the improvised vault was heaps of gold and other precious metals. Various alien artifact could be seen in the piles of treasure as well. "I was right, I knew it!" Smith exclaimed. 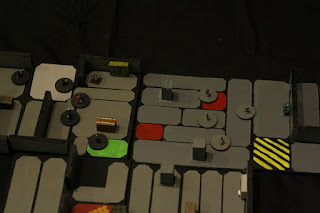 In the cavernous hall outside the vault, the followers yelled exitedly. Nyland came running to see what all the fuzz was about, and stopped in his tracks as he saw them. Space pirates! 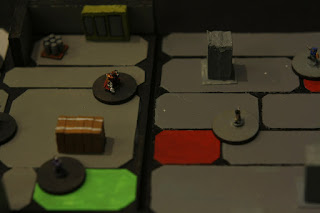 "Ah, Mr Smith, we meet again." A pirate clad in copper-colored armor stepped out.
"Jagar, I'm afraid I beat you to the punch" Smith smiled as he said this.
"Yes, but I have more guns, so I believe that what was yours is now mine." Jagar shot back, the smirk in his voice evident.
Not wanting to give up his newly aquired treasure that he had worked so hard for, Smith got ready to fight for his life. 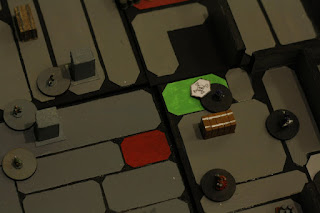 Jagar had clearly expected this, so as Nyland moves, both sides open fire, lasers and slugs flying left and right. A rifle-shot cracked the face-plate of a pirate, knocking him out of the fight. 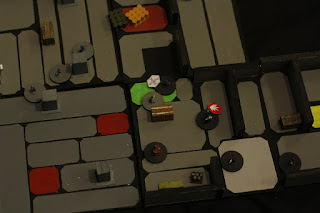 Charging through a hail of gunfire, leveling his shotgun at the pirate with a pulse-machinegun, the follower in green fire, knocking over his target. 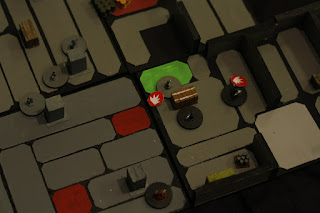 He is quickly forced to duck down by the crate  next to him as Jagar sends a torrent of energy from his weapon towards the follower. 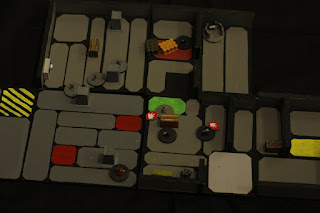 A brave pirate throws himself in behind a set of barrels, firing his sub-gun on full auto. His shots go wide, but the followers duck instinctivly. 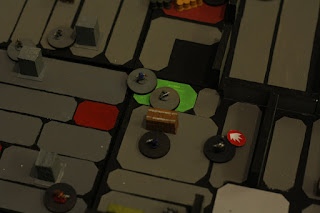 Running to his ailing comrade, the follower in blue helps him up on his feet, dodging fire from the two pirates closest to them. 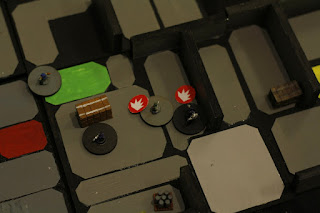 Back on his feet, Smith's shotgun-toting follower charges into the injured pirate, slaming him into the wall. As the big pirate got his bearings, he swiped a power-assisted arm. Swatted like a fly, his attacker falls back, injured but still in the fight. 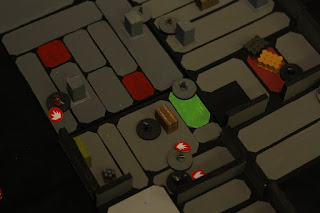 To stop Jagar taking any cheap shots at his local men, Nyland Smith fires off a few shots, forcing the pirate leader back behind the pillar. 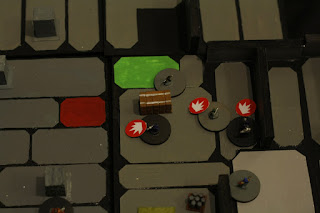 As he runs across the open space, he suddenly senses danger... 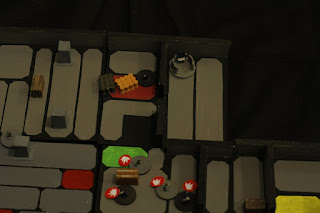 ..For he'd forgotten about the last pirate, hiding behind the barrels! The sub-gun barks a sharp burst, knocking the wind out of our hero!

At the same time, the local in blue pins down the last pirate. 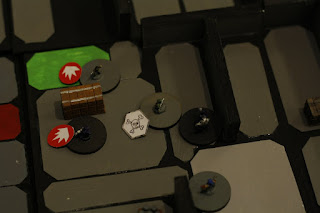 Knocked sensless, the follower in green can't defend himself as the big pirate close on him with his fists, taking the man out of the fight. 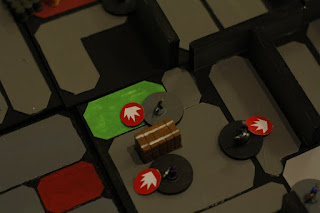 Charging ahead like a bull, the big pirate faces off against Nyland, who just got his wind back.
Ducking, blocking and trading punches, the pirate is eventually forced back, earning our hero a brief reprieve. 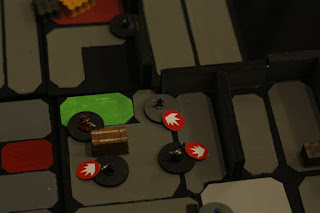 Seeing a chance to overpower his foe, Jagar charged from behind. Still out of breath, Smith manages to keep from being knocked out, but is pushed back! 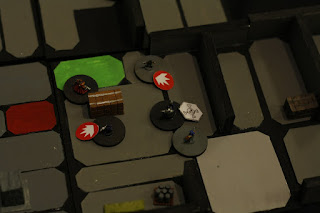 Taking advantage of the lack of attention, the follower in blue avenges his comrade by attacking the exposed back of the big pirate. 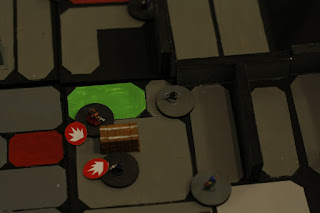 Aiming his gun, Smith dents and damages the armour of Jagar, forcing him to run for cover.

Deciding that his best chances lay in escape, one of the pirates take off, running for the door. 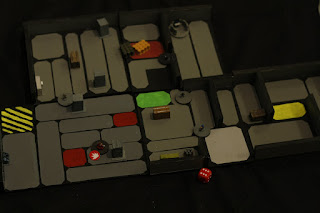 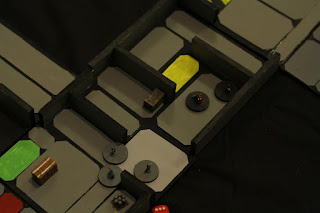 "Jagar, you'd best give up, we have you beat!" Nyland Smith yells at the pirate lord, as his followers take care of disarming the remaining pirate and tending to their friend.
"You win this time, Smith, but I'll be back, these treasures will be mine!" Jagar boasts as he falls back, careful not to turn his back to the victors.

So what did I think of FiveCore Pulp?

A solid addition to the existing lineup, with the addition of the Cinematic move, an extra 3 dice you can use to make suitable pulpy moves like swinging on ropes and jumping across rooftops, is the most iconic thing from this particular set.

Like the earlier titles, Fivecore has the same simple and fast playstyle with all the bits and pieces that I've come to expect from the NWG titles, lots of tables for generating characters, scenarios and situations as well as a comprehensive set of campaign tools.

The focus on more terrain and interaction with it was welcome as well, allowing for some more focus on traps and overcoming obstacles with exploration rather than just shooting bad guys. Mind you, there's plenty of that too if you are so inclined. It just makes it possible to recreate situations from movies and games like Indiana jones, the Uncharted and Tomb Raider series, which makes sense since it's all about pulp!

The only thing I found a bit lacking was the amount of pre-made items in the book, and the lack of any form of vehicle rules, for those fights on top of moving trucks or air-plane wings, but these are minor complaints and really doesn't detract from the game itself.

Racking my brain trying to decide what to do next, I've not touched any of my 6mm fantasy stuff in what seems like an age. That realization, combined with a healthy bit of Skyrim mixed in have got me in the mood for some dungeon crawling. So watch this space and you are likely to see lasers replaced with broadswords for some time to come.

Til next time!
Posted by Alexander Wasberg at 01:53 5 comments: