Interested in trying something new I have been thinking of some different 6mm projects that I've had for some time. I first started prepping some GZG infantry for some small-scale corporate merc fighting before I saw a few interesting posts on the wargames website.

Being a long-time fan of SF3D/m.ak. I decided to try my hand at sculpting some retro-scifi armored vehicles, not for the first time. While they aren't done yet, these two have some potential I feel. 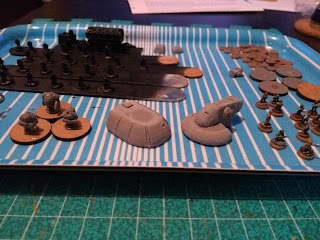 I haven't managed to make a turret design I like as of yet for the vehicle on the left, while the right-hand one needs another option or two for the turret hardpoints on either side of the vehicle. 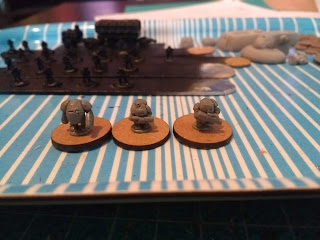 After I got started I sort of knew I'd like to sculpt at least one type of infantry, in some sort of hardsuit of course!
It has been quite some time since I tried my hand at using GS to sculpt anything other than small adjustments and mods to existing minis after a few disastrous attempts at making some from scratch.

This attempts have so far gone better than I hoped! I don't know if my skills have improved or if I just did something wrong earlier, but nevertheless these attempts came out quite ok I think.
I'm not sure if I need to make any more additions to these, but I will revisit that after I manage to finish the last bits for the vehicles.

With the sort-of success I feel encouraged to try my hand at a few more things unrelated to this project, but we'll see when and what that ends up being.

That's all for now, til next time!