Tale of the Wandering Slayer chapter 2: An unexpected encounter.

When we join our Wanderer again a few more days have passed. He has yet to see a single human, but thankfully no more beasts or magical fiends either. 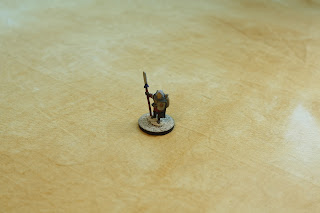 He is certain that he must be getting closer to where someone might have settled, since the dunes have been growing smaller as rocky outcrops and vegetation more frequent. Thank the gods for small favors! 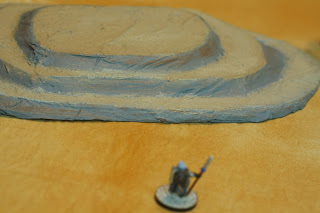 As the Slayer gets closer to a rocky hill, he hears the unmistakable sounds of men arguing and the braying of a beast of burden. Have he finally found some civilization? 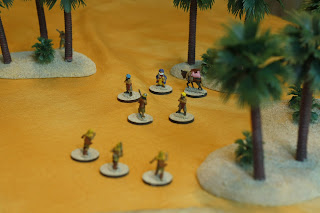 Sneaking up the hill to peer over the top he sees a group of rough-looking thugs surrounding a merchant and his guards. The exact words of the conversation is hard to make out, but the intent of the rogues is clear enough. He sneaks closer yet, trying to hear more clearly. 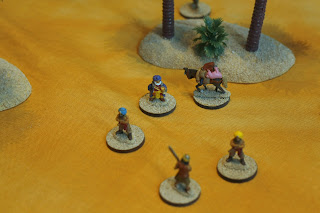 "But I have already paid your chief Zarbossa. My caravan is protected by agreement." The merchant puffs up his chest in an attempt to look more authorative.
"I'm afraid that we have had a change of leadership. Zarbossa is no longer leading us. As such, you need to pay me to ensure your safety and that of your goods, of course."
The leader of the bandits shifts to but his hand on the pommel of his sword, sunlight glinting off the copper-colored scales of his armor.

"This is an outrage! You cannot do this! Besides I have no more coin to pay you with, it's all tied up in my wares." The merchant huffs after his outburst, his face nearly as purple as his jacket.
"Then we'll just have to take what you have." The mirth is gone from the bandits voice, replaced with a dangerous edge like that of a thunderstorm suddenly rolling in were before there was not a cloud. 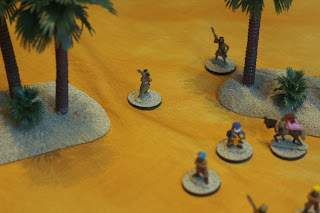 As they watch each other warily, one of his bodyguards notice more bandits trying to sneak up on them from beind and cries out: "Filthy dogs! You would sneak up on us,sword in hand while we parley with your chief?!"

Meanwhile the hawk-eyed merchant spot our Wanderer as he sneaks across the desert floor behind the bandits line. Recognizing his armor as that of a Slayer, he cries out: "Master Slayer, help us drive off these curs and you will be rewarded! I swear it!" 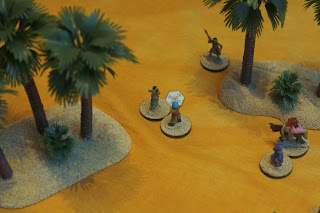 As their master entreats with the Slayer, his guards are quick to act on the momentary distraction. Bahn strides towards the sneaks intending to stab him in the back and with a mighty swing from his curved sword he nearly splits the bandit in twain! 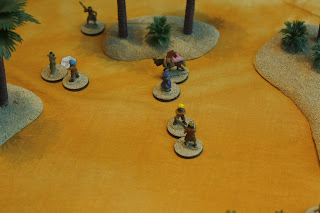 Wasting no time, the merchant runs to the pack-mule and starts rummaging for something. Meanwhile Gahn, brother of Bahn and the merchants other guard, starts toward the bandit's leader.
Sparks fly as their blades meet, but as they clash again and again the bandit manages to score a deep cut on the guards naked chest, causing Gahn to cry out in pain. 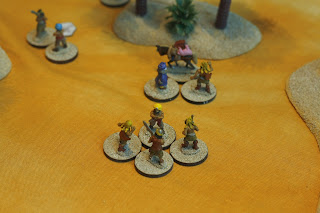 A trio of bandits just behind their leader run towards the meleé. The unexpected start of the fighting causes them to give pause for a split second, but they have the numbers. Two join their boss to surround the wounded guard while one makes for the pack animal, hoping to secure the loot before the animal is scared off or the merchant flees on it! 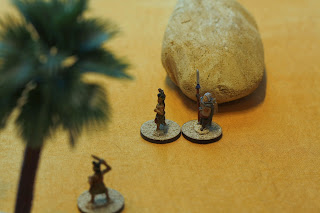 Our wanderer find himself in a bit of a bind. He has no reason or obligation to save the merchant as they have no contract, but the bandits are likely to attack him in any case. The merchant did promise a reward for helping him and the cowardly rogues are likely to run off as soon as a few of them fall in either case. Might as well get paid for it.

Decision made, the Slayer runs around a rock to attack the bandits from a better angle. Too late the closest bandit hear his steps, and he is dealt a crippling wound as he turns to face his attacker. 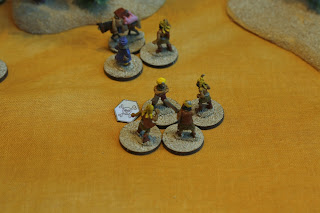 Continuing their deadly dance, the bandit leader strikes again and again, driving the already wounded Gahn to his knees. With a savage kick the guard is knocked out and the copper-mailed brute charges towards his brother, sword held high. 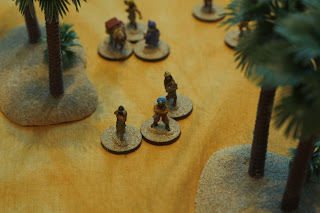 Bahn fights on, knocking back every attempt by the second sneak to gut him.  His attention occupied, he doesn't notice the charging bandit leader until the last second. A deep gash opens up in his back even though he tries to jump out of the way of the edge of the blade as it sings through the air. 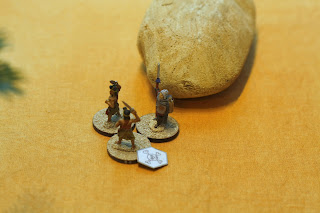 Turning to toward the Slayer and charging, the remaining bandit close to avenge his wounded comrade. But his blade is easily turned by the trained Slayer, who spent countless days and nights training to fight mighty beasts. With his attacker off balance, he simply runs the bandit through, letting his lifeblood drain into the sands. 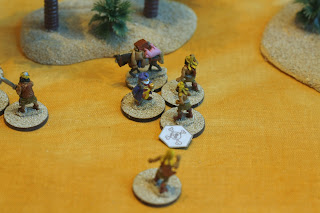 As the merchant's guard falls senseless, the yellow-capped bandits run to help stop the merchant from fleeing. When the first one reach for his arm, the merchant swings around with a wicked-looking dagger. Before the rogue knows what hit him, he falls dead to the ground, his heart pierced by the dagger. 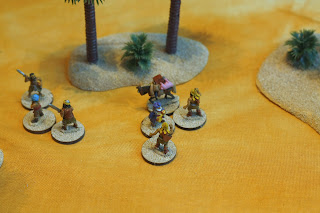 With murder in his eyes and curses flying off his tongue, the bandit comes at the merchant. In his anger he swings and misses, wincing and yelping as he recives a deep cut from the dagger that just killed his fellow rogue. With his back turned to the last of the trio, the merchant never sees the blows that knocks him senseless. 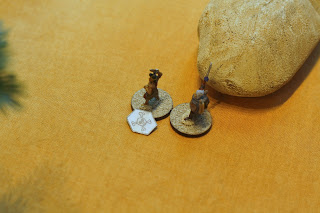 Already wounded, the second bandit proves no challenge to our wanderer and he soon joins his comrades. 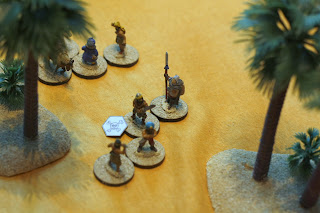 Even before the body hits the ground, the Slayer is moving again. Soon he clashes with the leader of these lowly curs. While certainly a more competent fighter than his underlings, the bandit boss is instantly on the defensive, barely dodging the murderous stabs from our hero's spear.
A lucky strike slides the blade along the inside of the rogue's arm, causing him to cry out and drop his blade. With this his fate is sealed, when less than breath passes before the Slayer expertly drives his blade through the boss' skull, slaying him instantly. 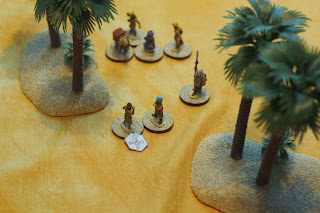 Distracted by his superior's defeat, the sneak fighting Bahn fails to deflect his flashing blade and has his chest slashed open, dropping him to the ground. 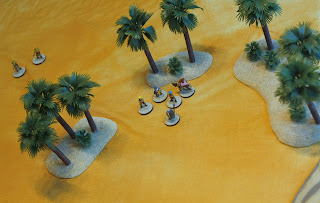 This was the final straw for the remaining pair of bandits, who promptly flee. The Slayer starts as if to give chase, but a shout from Bahn stops him in his tracks.
"Let them run master Slayer. We must tend to my master and my brother!" He exclaims.

Both turn out to be lucky, having received fairly light wounds. After some bandages and poultices have been administered, their patience is soon rewarded as both men regain their senses, sore but most definitely alive. 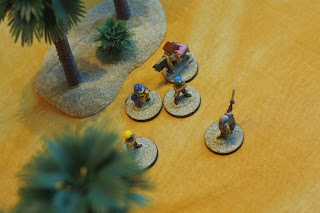 "I thank you master Slayer. Your timing was most fortuitous! I fear we would not have made it out with our lives if not for your intervention." The merchant winces visibly as he shifts around, trying without success to find a less uncomfortable position.
He continues:
"My name is Miklos, a humble merchant. I, along with Bahn and Gahn here (he gestures to the two brother guardsmen) were traveling back to our home, a small town near here called Biru Kutha."

The Slayer regarded Miklos. It was a stroke of luck that he happened to know the way to a nearby town. Maybe he could find some clues to the ancient ruins there?
"Hail and well met Miklos the merchant, I am Emerik the Slayer. You mentioned a reward for your rescue if I am not mistaken?"

"Yes, you speak true master Slayer. Alas I carry no coin as all is invested in the merchandise on this pack-mule." Miklos sheepishly indicates the beast behind him.

It's laden with a whole host of goods, from food and drink to arms and armor. Emerik is surprised the beast can stand, nevermind move, with such a load.

"I feared as much. No matter, I could use a few nights in a bed after this time on the road." the Slayer admitted to the merchant's party.

"It's only a short bit away, if you follow us." Gahn and Bahn say in unison, indicating that the wanderer should follow them.

Some time later, as the sun begings to dip, the party in within reach of the walls of Biru Kutha. 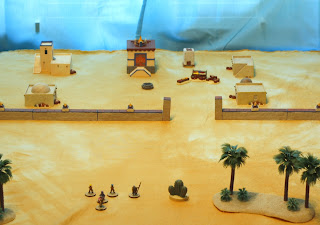 "It's not a great city just yet, but gods willing (the merchant kisses a medallion before replacing it in his robes) this will be a jewel of the desert!"
"Any civilized village would have done at this point." Emerik answered.
"This is not just any town my friend, but I might be biased, having helped found it! You will stay in my house as a guest for as long as you need and I shall repay you as soon as I am able, of course."
"Very generous of you, merchant Miklos." Emerik says, somewhat distracted. He finds it peculiar that the gates look unguarded and he can't see any townfolk about. It reminds him more of an abandoned village than a bustling small town. Maybe they are wary of strangers..

As they get closer, he notice the guards and Miklos seem concerned as well.

"Where are all the people? Is this common for this town? " Emerik finally asks. "No, it most definitely is not. Come, we must see the priest, he can no doubt tell me what has transpired since we left!" 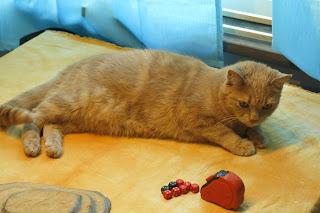 During the last part of the battle, as the bandits fled a rare sight: One of the titanic desert guardians decided to lounge just where Emerik had come through.
Posted by Alexander Wasberg at 11:15