After the initial success of my 6mm Laserstorm game, I wondered if this wouldn't be perfect for my 3mm big battles as well.

So I decided to try it out with a scenario similar to the first one I ran, but this time around I started messing with custom units a bit..

On a forest moon far past the CSA's holdings, the Outer Colonies had tried staking a claim to the entire moon. Since they aren't formally recognized as a autonomous state, both the CSA and the Solar Bloc had issue with this. The CSA expiditionary force managed to beat their bloc counterparts to the moon only by virtue of proximity, their closest garrison being some light-years away. 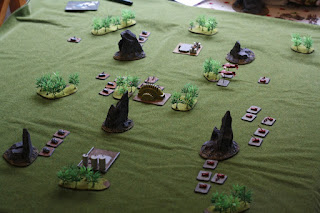 Surveillance satellites in orbit around the moon took these shots as they forces were closing in on each other. 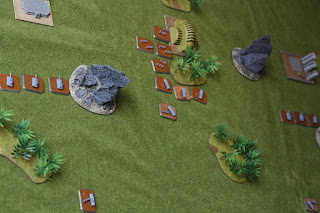 The CSA line, just as the heavy infantry section reach the generator. 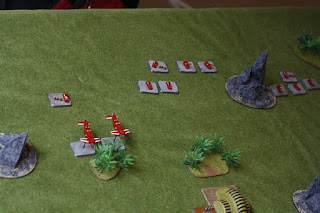 The OC task force, closing on the objectives. 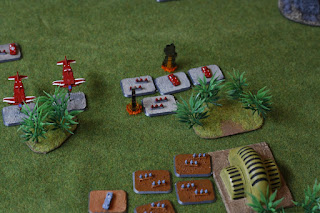 The first shots are traded, and the CSA heavies defeat a stand of infantry along with their transport! 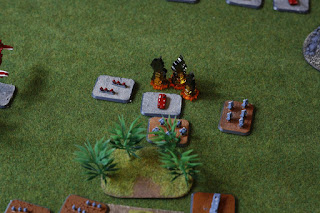 Capitalizing on their momentum, the CSA power armor assault the other apc of the OC infantry. The elite units tear through the vehicle like wet paper. 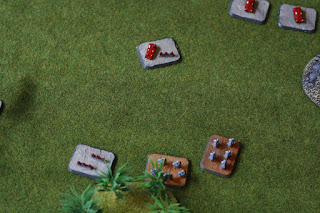 One of the OC commanders, attached to the infantry, tries and fails to damage the CSA PA. 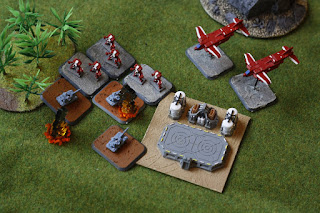 Deploying to the far left flank, OC battlesuits charge into the Chevalier tanks that took up positions by the landing pad. The suits are in their element, and two of the tanks are ripped apart by their assault. 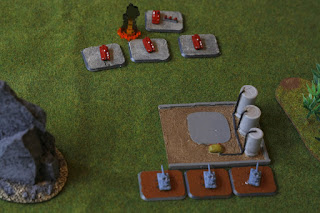 On the far left, another unit of tanks open fire on their OC counterparts. The hardbeams flicker, and one tank blows up as the engine is hit. 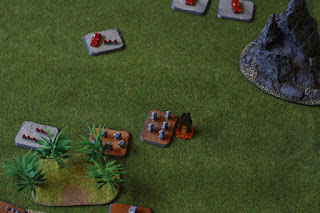 Taking aim, the OC's SPG unit launches a salvo of shots at the PA. Heavy shells hit all around them, damaging the suits beyond repair. One unit of PA is out of comission. 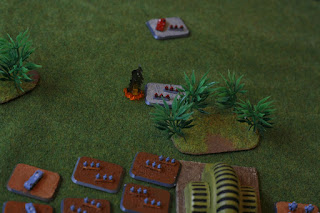 Re-inforcing their hold on the central objective, the CSA infantry pour all their fire into the last remaining infantry unit. The awesome firepower neutralizes the threat, leaving the CSA in control of the generator, at least for the moment! 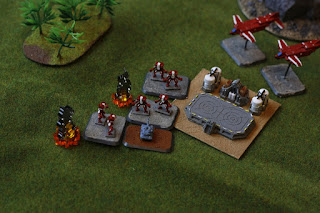 On the left flank the last Chevalier steps up and engages the OC battlesuits, blowing out the legs from under two of them. The full weight of his tank rolls over the fallen suits, making sure they stay down. 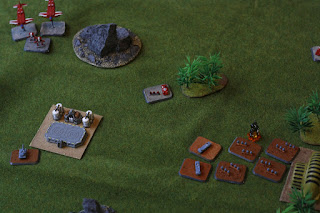 As the battlesuits fall back, their commander sweeps in, opening fire on the CSA infantry in an attempt to force them to fall back. One stand is lost to the attack, but they stay in place, readying a counter-attack.. 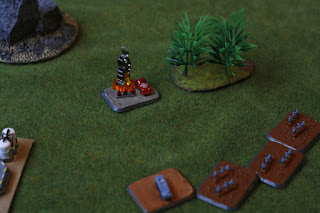 Advancing closer, the infantry open fire with their AT-rockets, blowing a few new holes through the command apc. 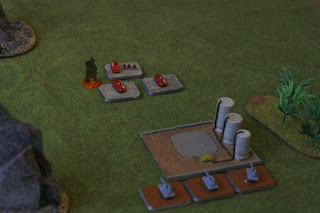 The gunnery duel on the right flank keeps raging, and another OC tank is lost to hardbeam fire from the Chevaliers. 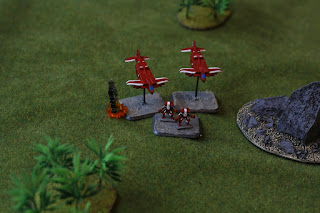 Taking a few hits from the co-axial gun on the Chevalier, one transport VTOL is forced to make an emergency landing. 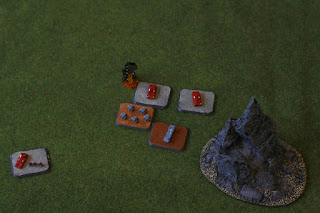 With more shells falling around them, the remaining PA suits charge north, determined to neutralize the heavy guns. When they reach the first gun, the crew flees before the PA rips the turret out of the carriage. 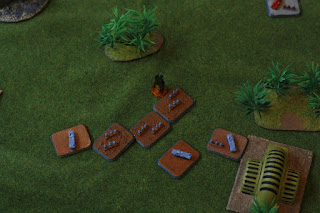 The infantry commander keeps firing on the infantry, knocking out another stand. The veteran troops still hold, brave in he face of adversity. 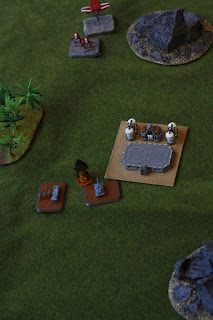 The final battlesuit launches a swarm of missiles at the Chevalier. The explosions rock the tank, blowing pieces out of the hull and tracks. 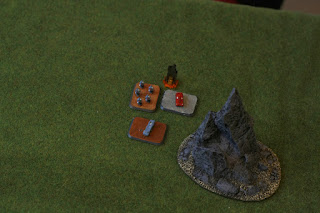 Following the example of their comrades, the crew of the second SPG bail out before their gun is turned into scraps by the PA stand. 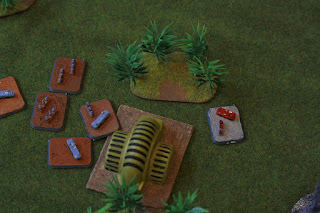 Contesting the objective, the lone commander fires but fails to damage the CSA infantry. 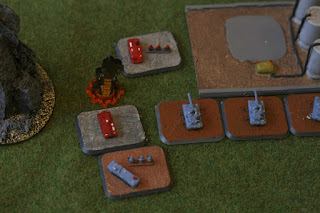 Deciding to try an last-ditch assault, the OC tank and their commander charge towards the Chevaliers, hull down beind the re-fueling depot. The attack is a disaster, as the tank is lost. 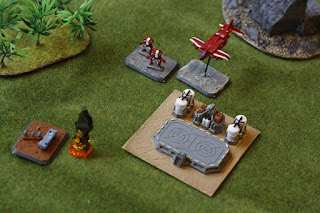 Advancing on the lone command vehicle, the battle suit fires another volley of rockets at the CSA vehicle, blowing it apart. 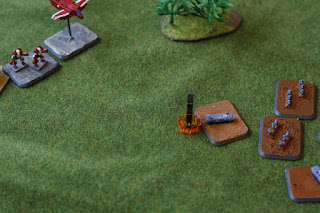 Seeing a chance to salvage what's becoming an untenable position, the suits push on, firing at the infantry by the central objective as well. One apc breaks down as the rockets blow the tires of the vehicle. 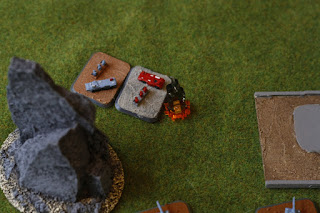 Being surrounded and alone, facing off against a full unit of Chevalier mk2's, the command vehicle attached to the OC tanks decides to engage the lighter armored command apc instead of the tanks.
The close range fighting is intense, until one of the CSA command squad manages to pop a grenade into the enemy vehicle. The dull thud signals the end of the engagement. 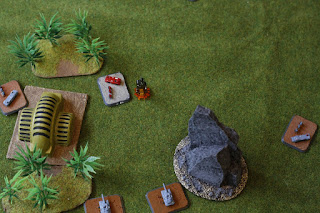 The Chevaliers are ordered to swing around, engaging the last OC field commander. Hardbeams once again flicker, and the command vehicle stops dead in it's tracks. 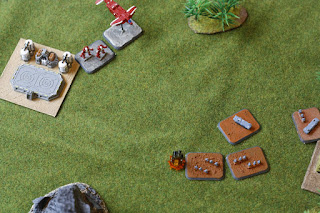 Knowing they're the only combat effective unit left, the battle suit and it's VTOL transport open fire on the infantry. Knowing if they can force a retreat they will be able to stall the CSA offensive. One more stand of heavy infantry is lost, but the CSA regulars hold their ground! 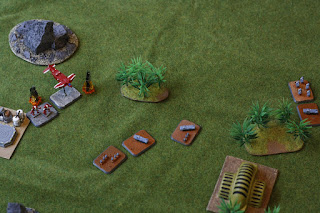 The remaining infantry stand launches it's rockets, but the battle suits nimbly dodges them! Machinegun fire from the apc saws off a wing of the VTOL however, forcing it down and out of the fight. Hoping it's not too late, the commander orders the last PA unit to engage the last stand of battle suits with their rail-guns. The hyper-velocity slugs hits the OC suits before there's any time to react, punching great hole trough them. The last objective have been denied to the enemy. 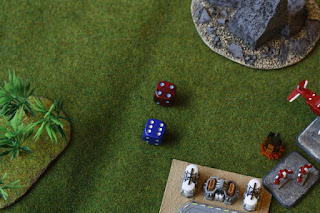 With all OC assets neutralized, the final objective score might feel superfluous, but as we can see it was quite close, the CSA beating the OC by only 2 points, scored in the last round no less!

The OC hadn't been able to halt the advance for long enough, now they'd have to fall back further than they'd hoped, waiting for another chance to counter-attack the CSA invaders!

A good game, much like the first one, it was quite close, even if the OC had terrible luck with most of their rolls, or the CSA was very lucky with their's if you prefer.

I'm thinking of painting up some more assets for both sides, as I would like to play some bigger games and I happen to have quite a few extra 3mm bits knocking about that would be useful!

Next up however will be more mechs for Mech Attack as I have filled out both sides to a lance each (4 mechs per side) I also finished the buildings so that said mechs can fight in a slightly more urban environment.
A set of new terrain pieces are taking shape, something I should have done ages ago, but more on that in a couple of days hopefully!

Posted by Alexander Wasberg at 06:16