I recently played my first game of FiveCore/FPfH, and I had some more ideas I wanted to try out, so I set up the boards again.

I wanted to see how the game handled a different set of scenarios, as opposed to the standard shoot-out.
I didn't have time to try more than one this time, so I opted to start with a hostage rescue.

A few days ago, local time, a visiting executive of one of the many major corporations that have recently taken an interest in the small colony world of  Hamill's World, was kidnapped.
A set of demands was delivered to the local HQ of the corporation, demanding that a ransom be paid.

Being none too keen on paying the kidnappers and thereby making themselves a target for future attacks, they decided to hire a group of Fixers. These ex-military problem-solvers have a reputation for getting the job done, so they are brought in from off-World to handle the situation.

A plan was put into motion, the fixers goes in under the cover of darkness to try and extract the hostage with minimal operational losses.

When they arrived, they realized that they had underestimated the kidnappers: 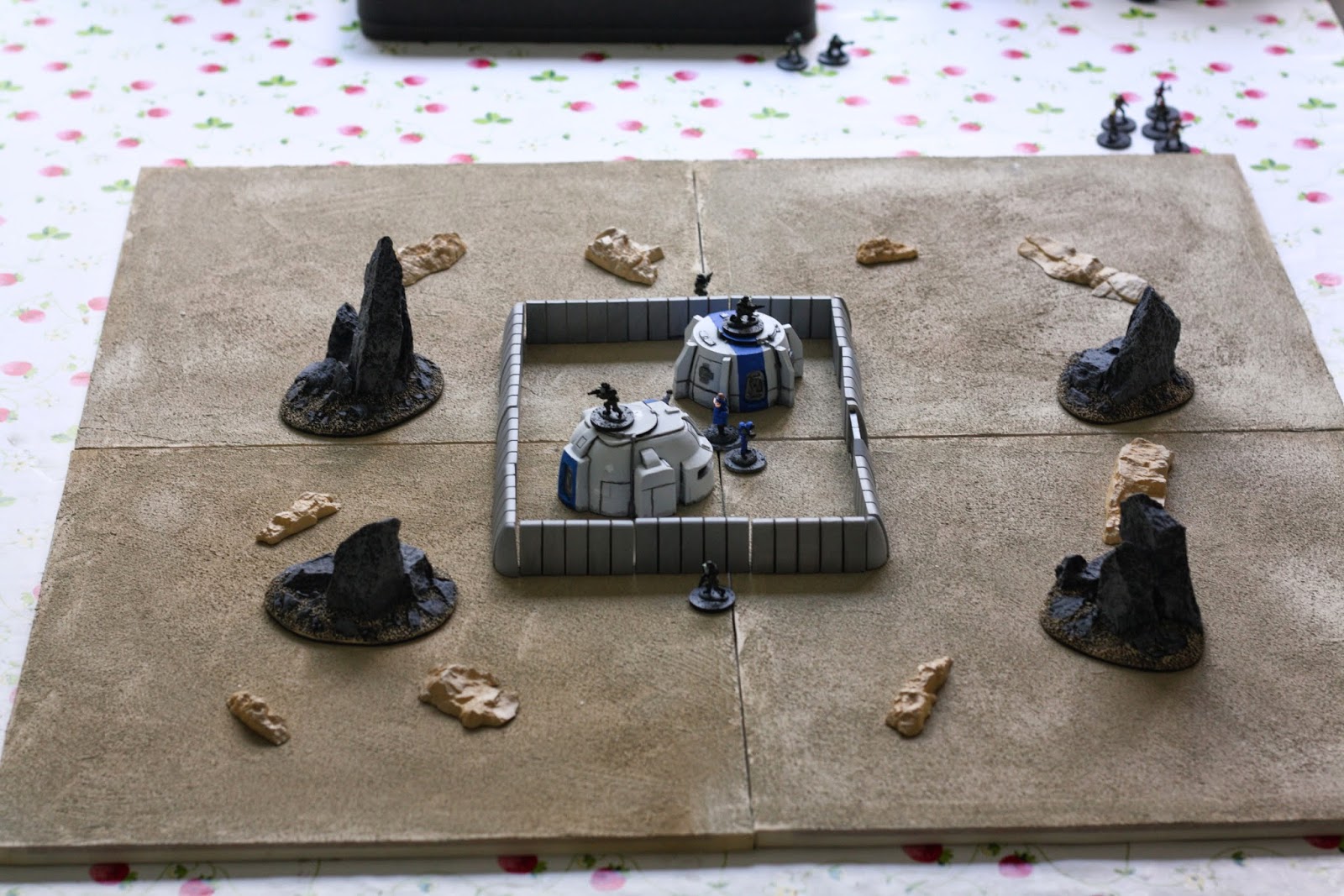 The mastermind of the kidnappers are a local gangster known as "The Baron", but apparently he has found some new friends. The dreaded Control Battalion, a mercenary force feared throughout the galaxy. But how did this local crook afford such heavy hitters? 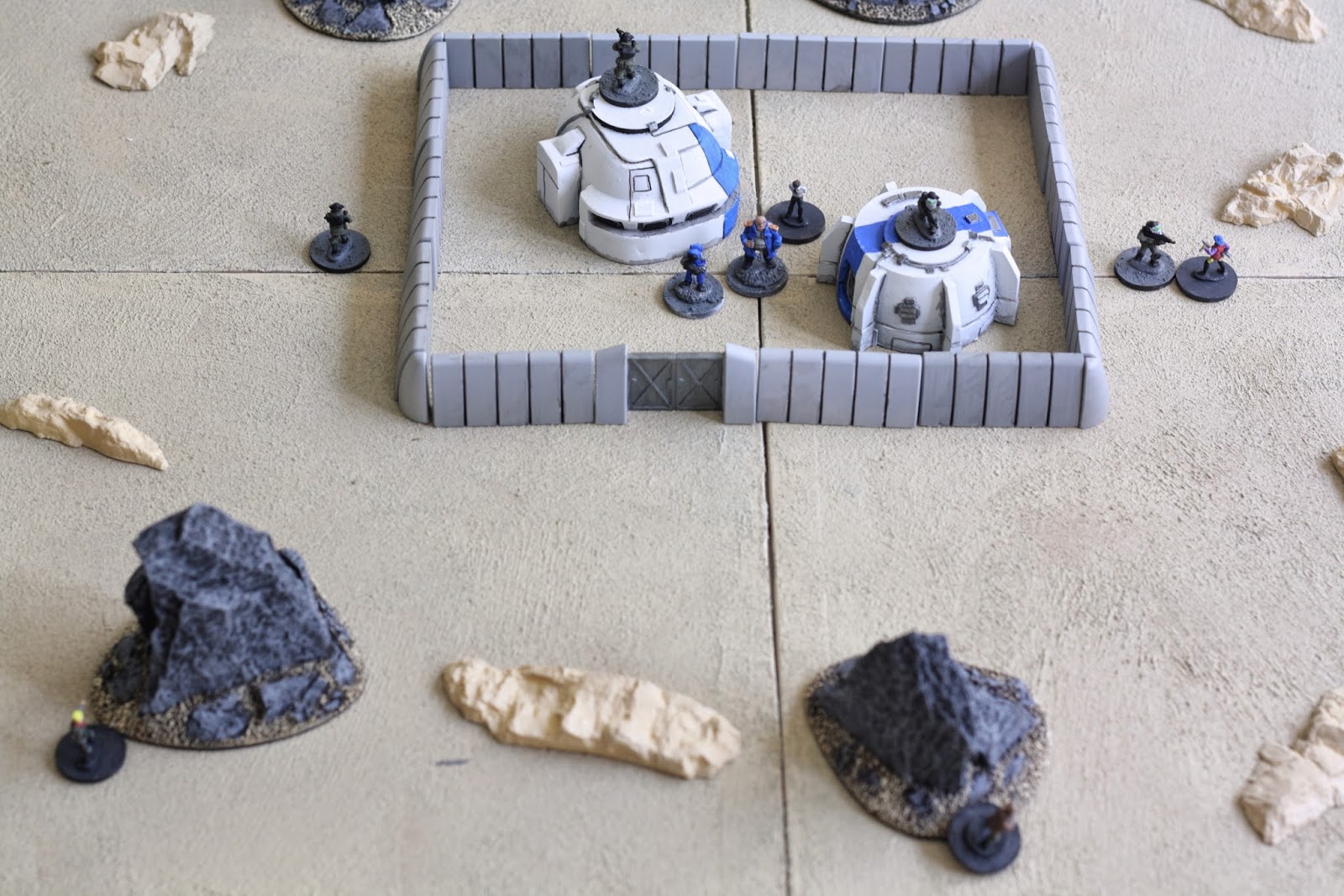 Fixers are moving up towards the compound, I chose to use the stealth-rules, the 2 guards on the outside were patroling, with the rest standing guard over the prisoner. 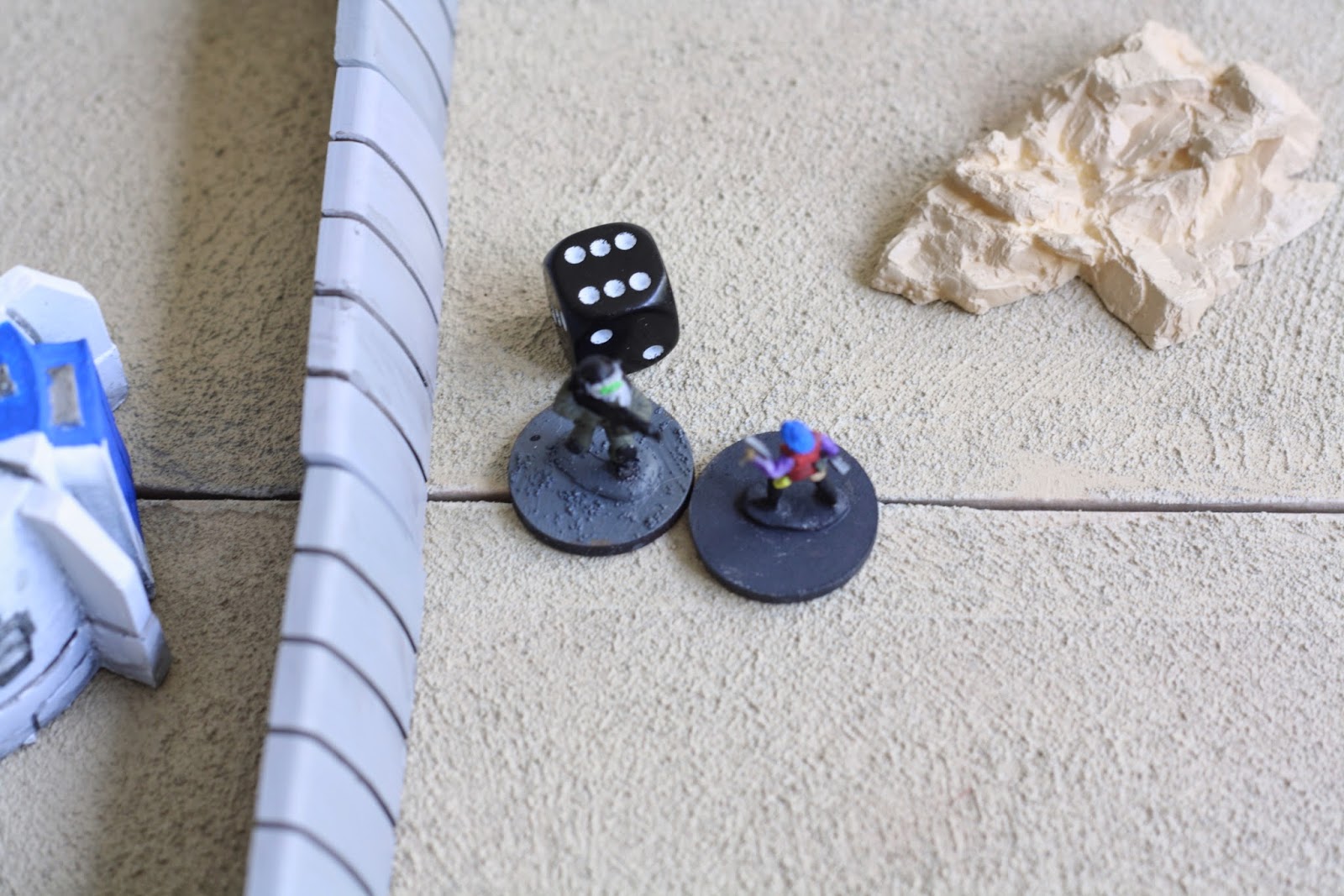 On the right side, the first guard is taken out. (When you use the stealth rules you would normally be spotten automaticly if I moved so close to the guard, but since I managed to get into meleé range, I get to fight a round. Only if he survives, will he be able to raise the alarm) 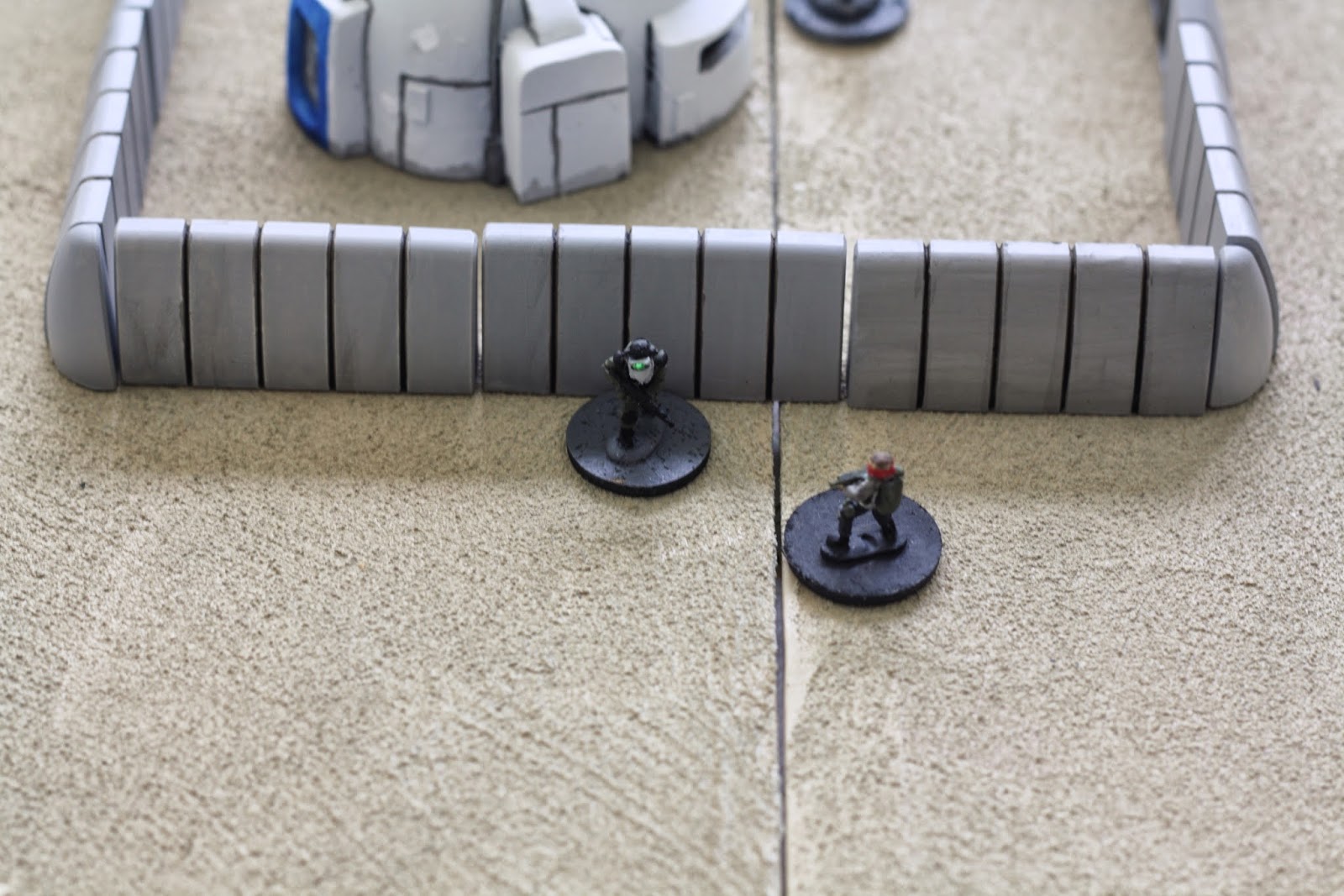 On the other side,when he tried to duplicate the feat of his comrade, disaster struck! This guard wouldn't go down as easy, and he manages to raise the alarm! The battle-plan just went out the window. 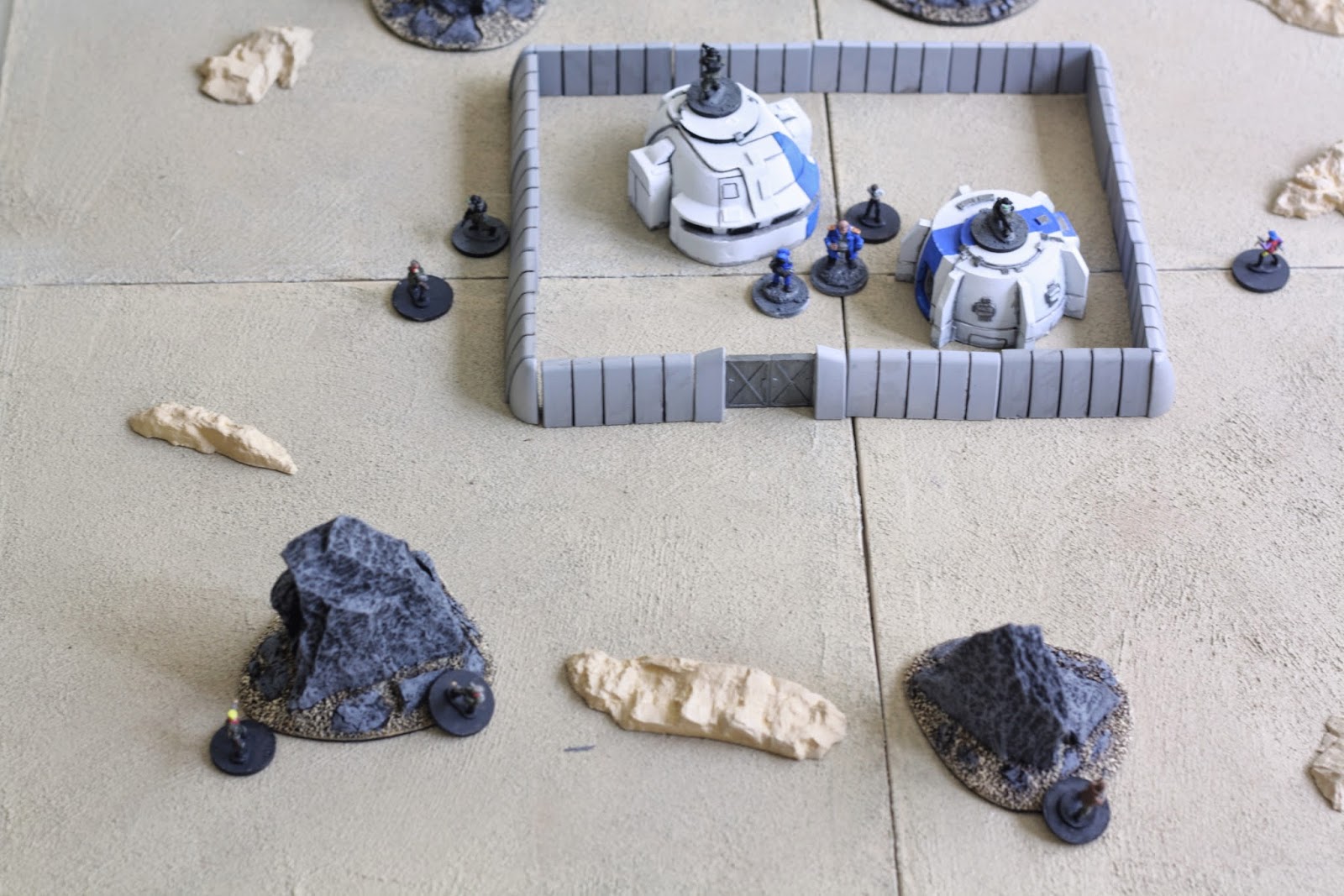 Having anticipated something like this, the baron's men call for re-inforcements, before they open fire! 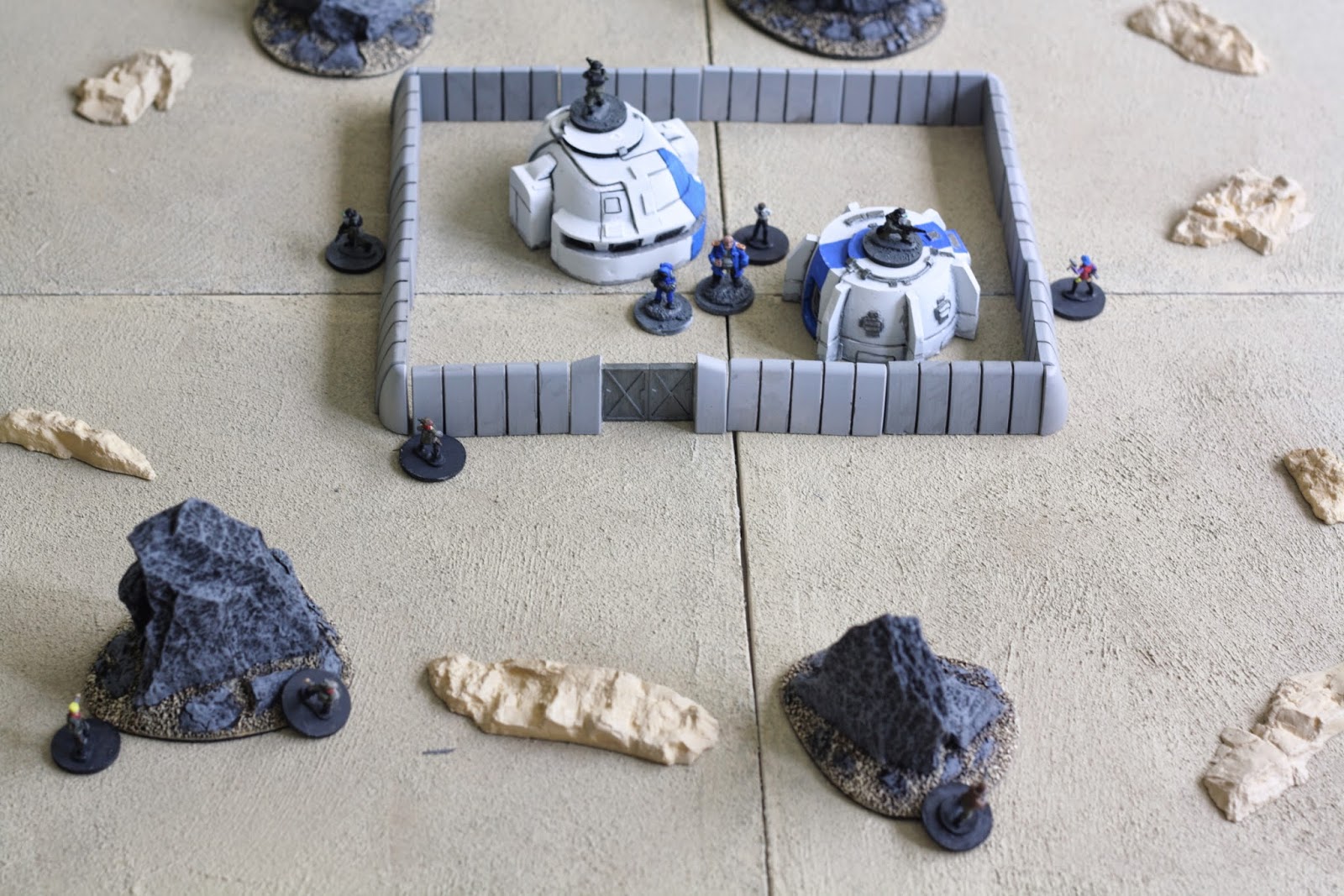 A bail of bullets narrowly misses the fixer on the left, who manages to dive into cover behind the wall, and the female fixer on the right. 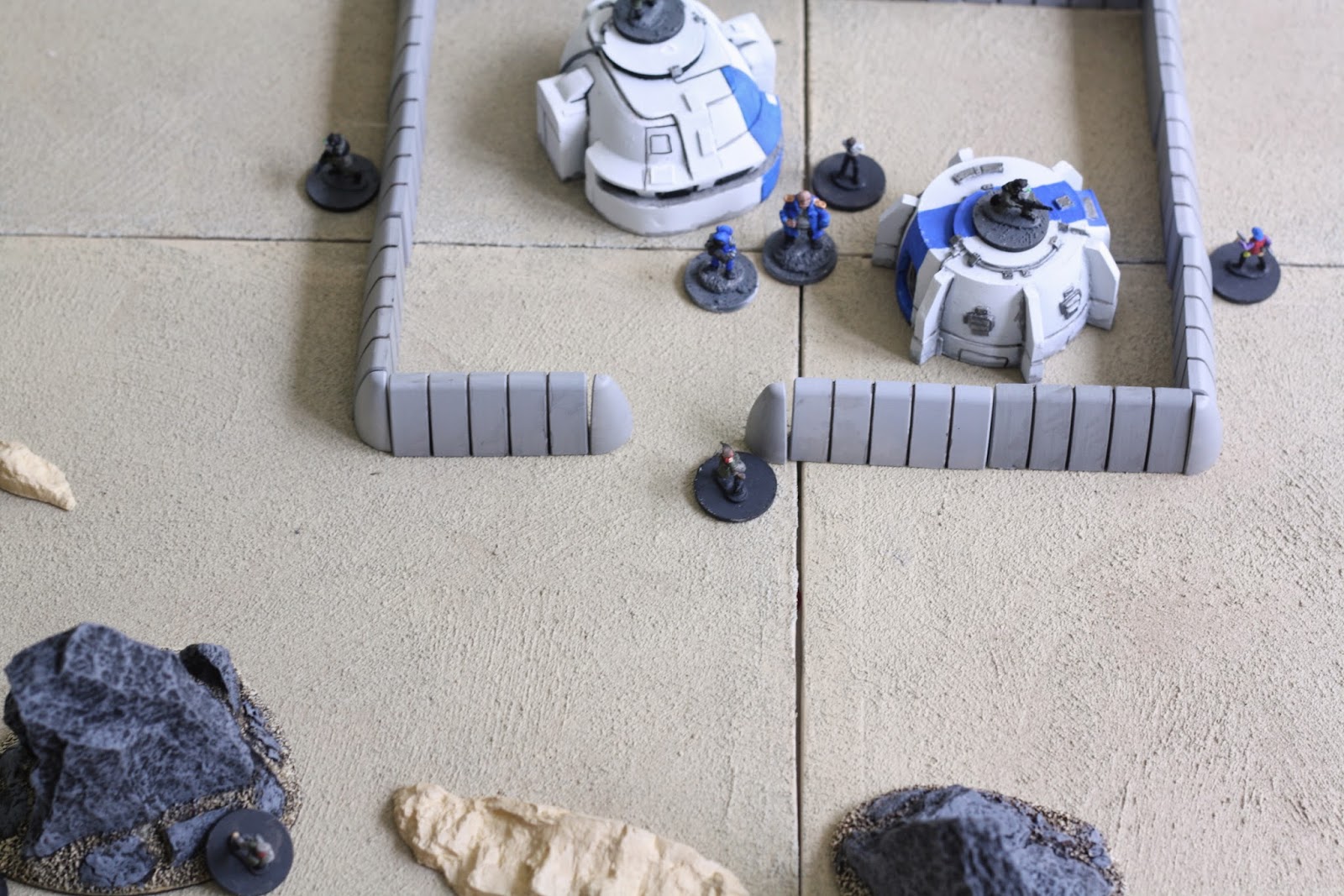 Making sure that he is covered, the fixers breach the door to the compound. 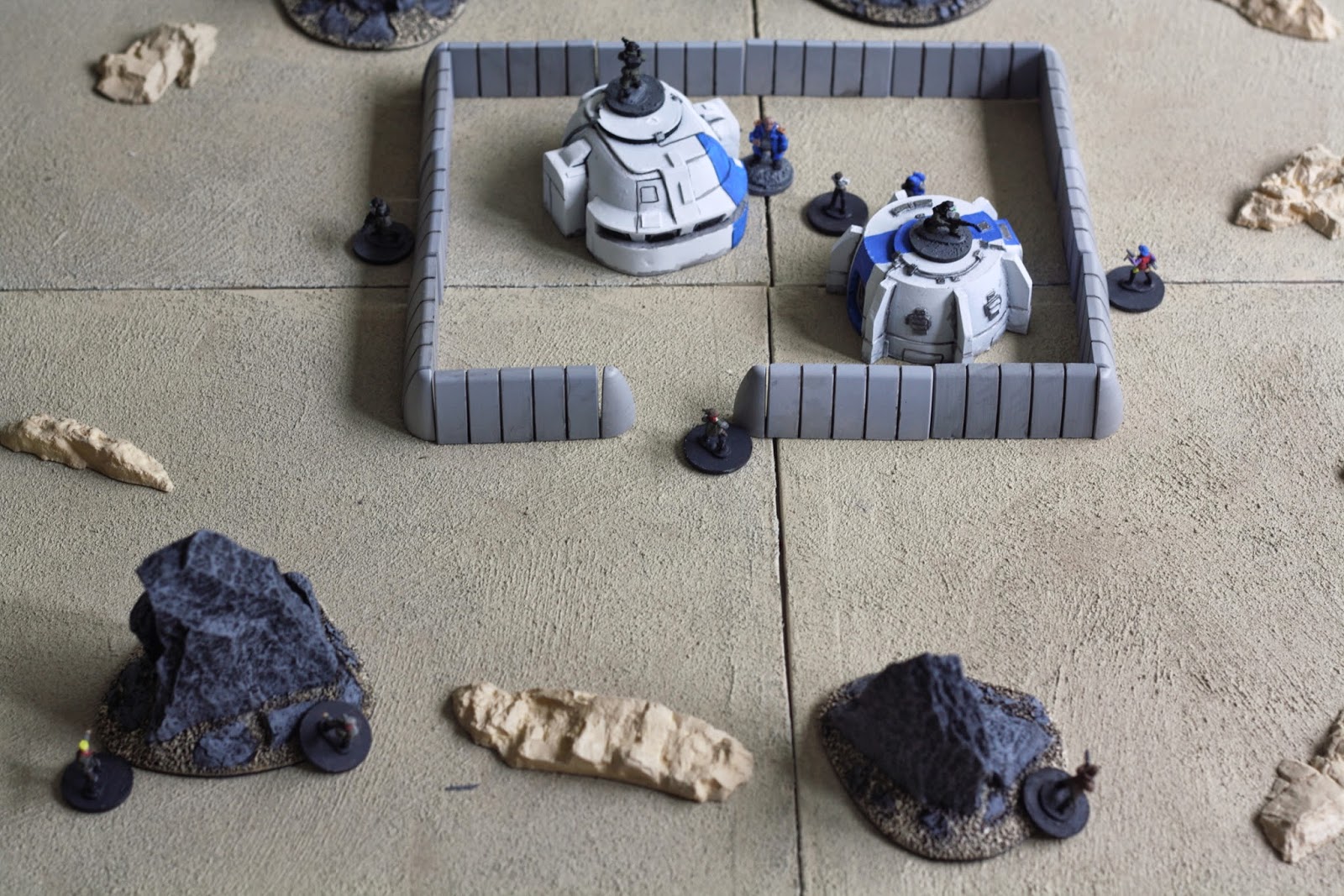 A firefight breaks out the second the door goes down, forcing the baron and his bodyguard to fall back into cover. 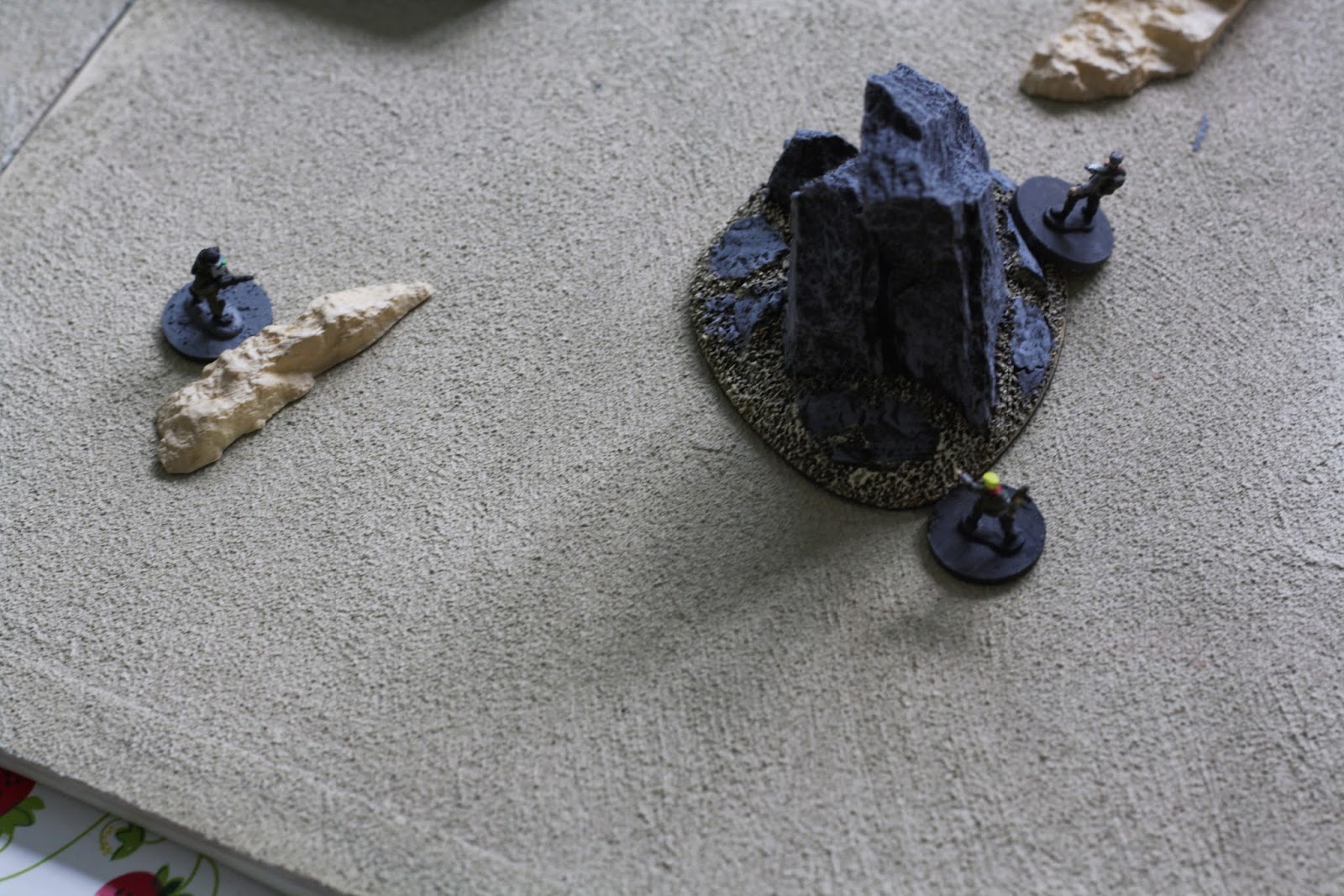 The Control Trooper outside the compound advances to keep the rest of the fixers pinned. 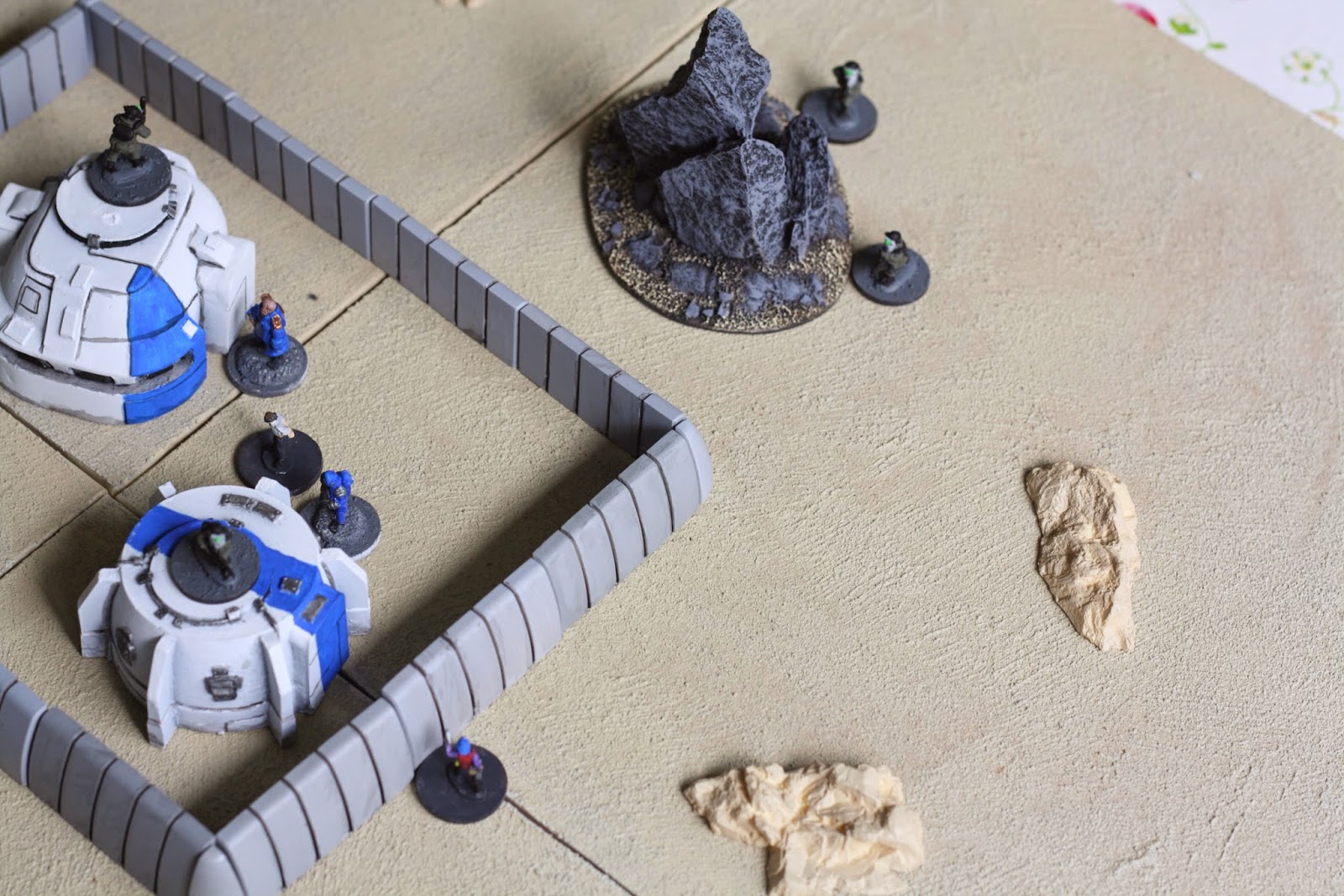 Some of the reinforcements arrive, wasting no time putting the pressure on their enemy. 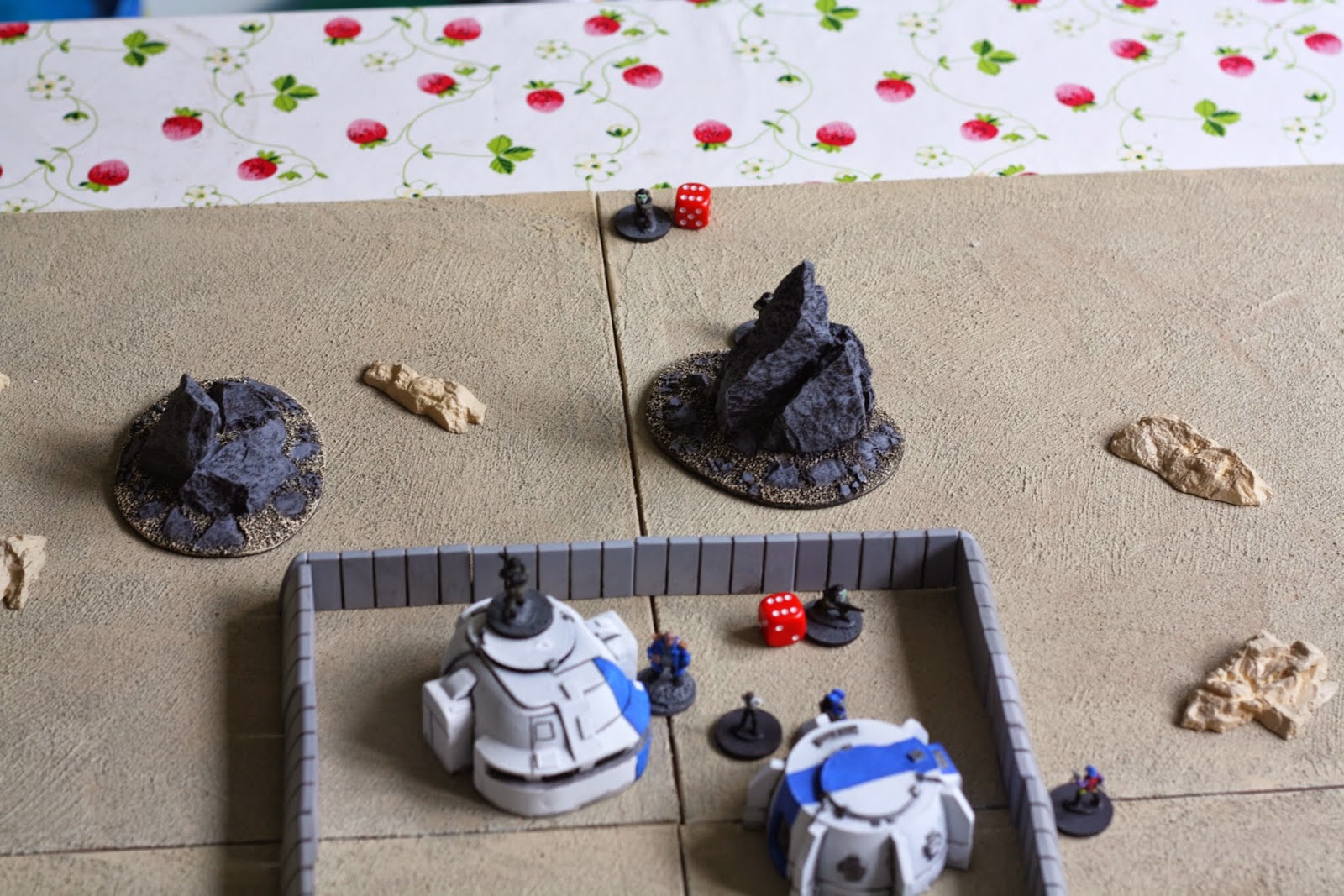 Another firefight breaks out, and the roof-top guard of one building, as well as the machine-gun carrying trooper were sent scurrying for cover. 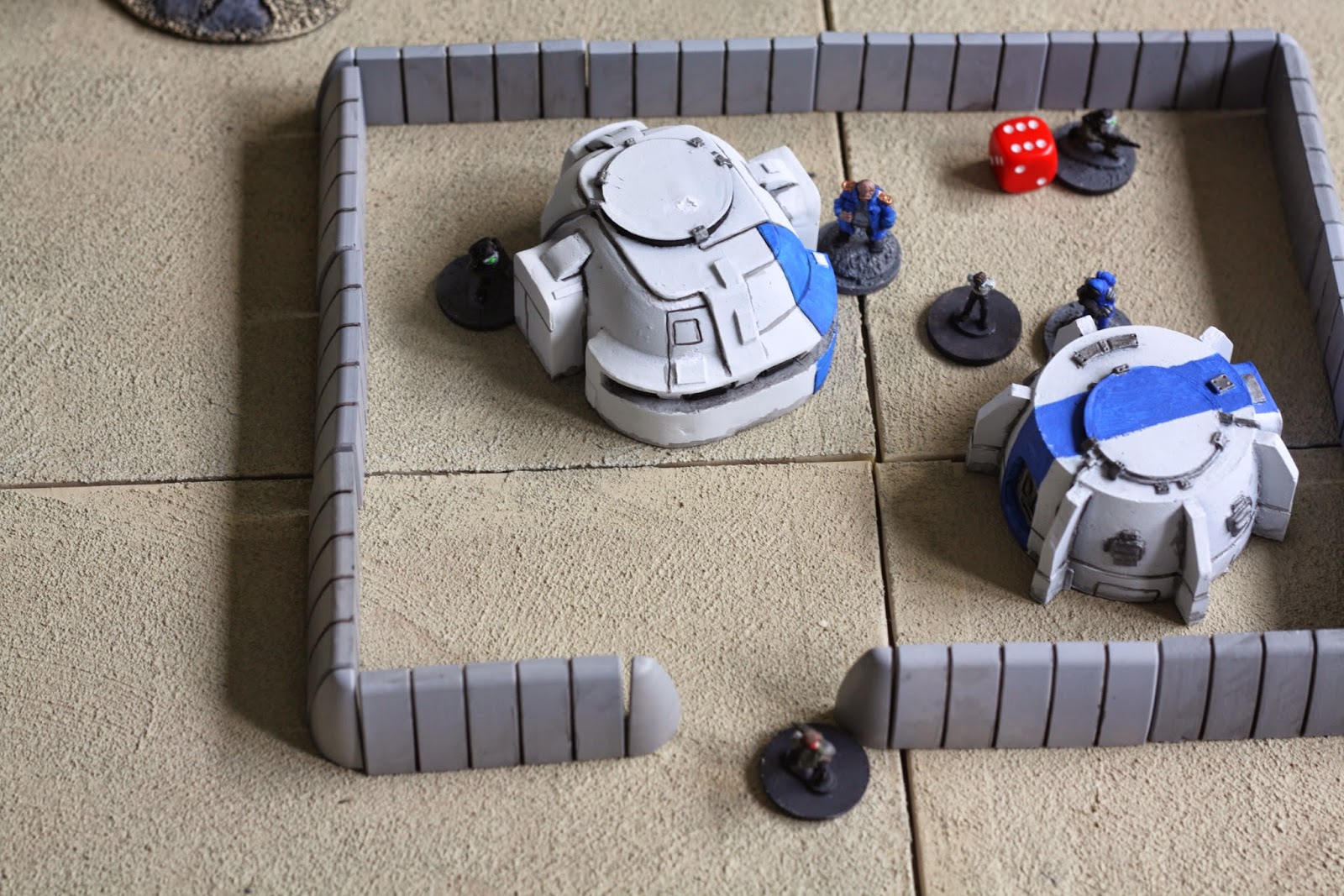 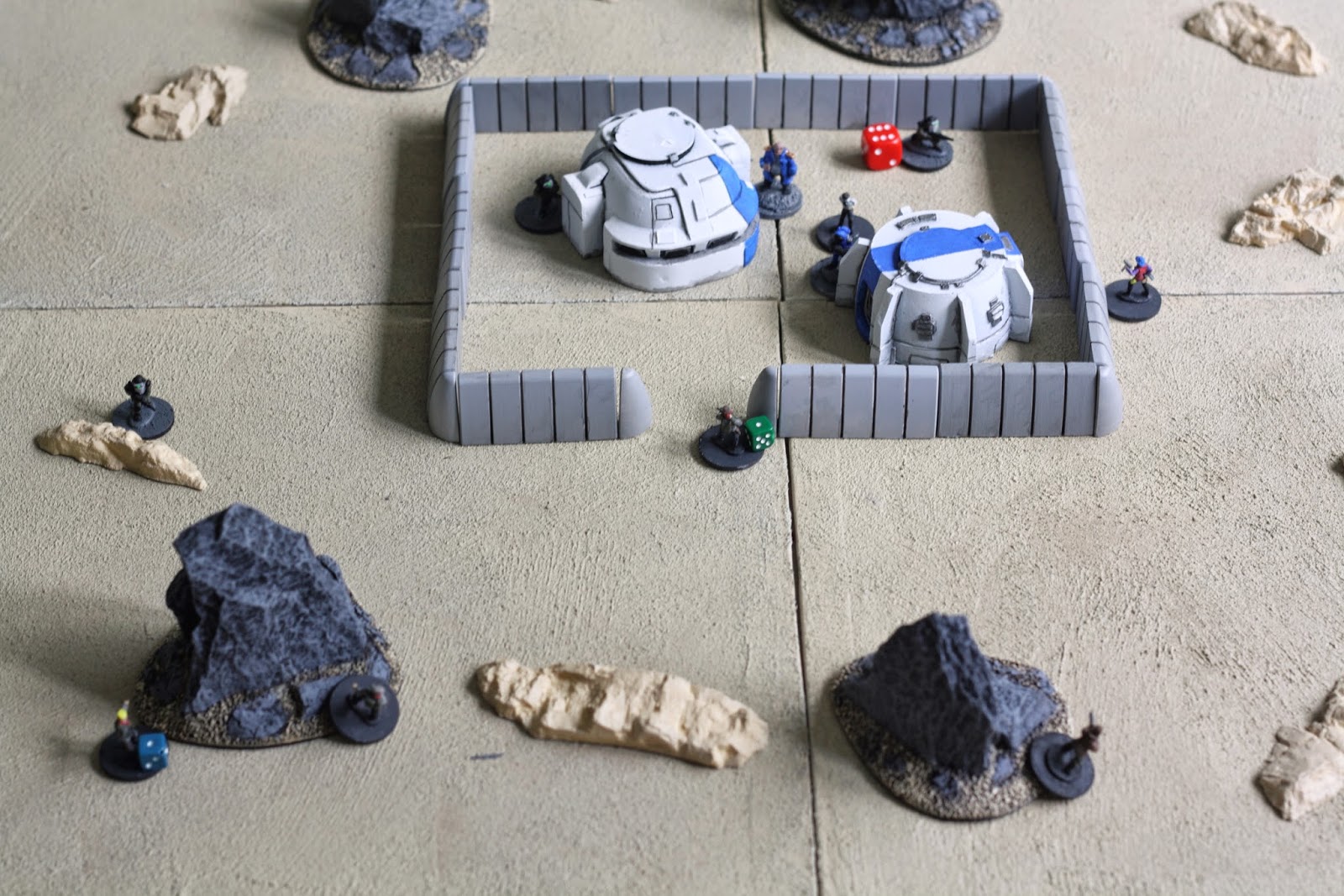 The Baron gets ready to return fire on the fixer in the doorway, his shot wounds the fixer, but he is not down yet. (To make the fixers slightly more durable I gave them the ability to ignore the first "Out of action"-result rolled against them. I felt it was more in keeping with their elite status) 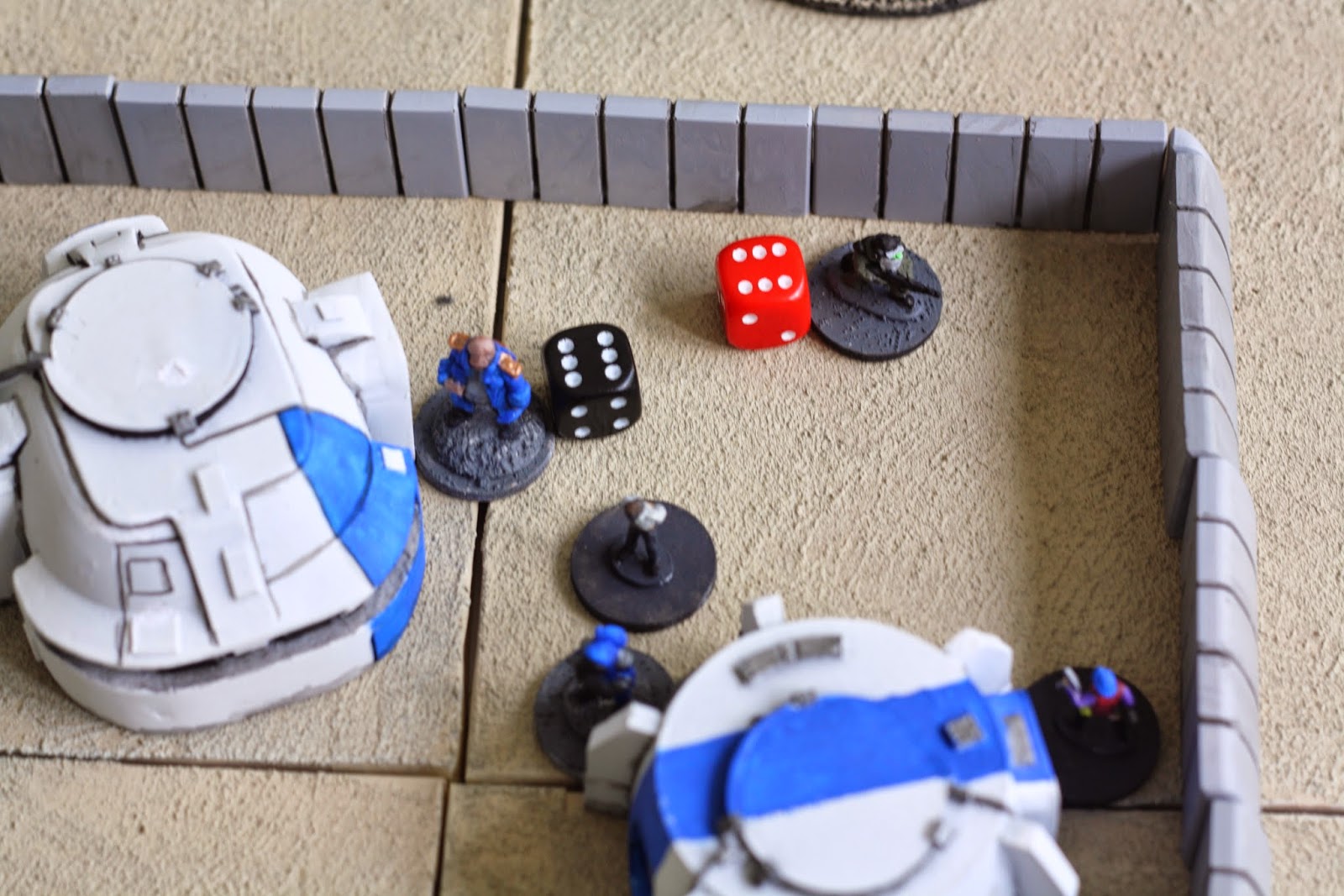 Our female fixer vaults over the wall, dodging some fire from the Control Trooper. Spotting The Baron, she lets her machine pistols rip, knocking out the baron instantly before she ducks into cover again. 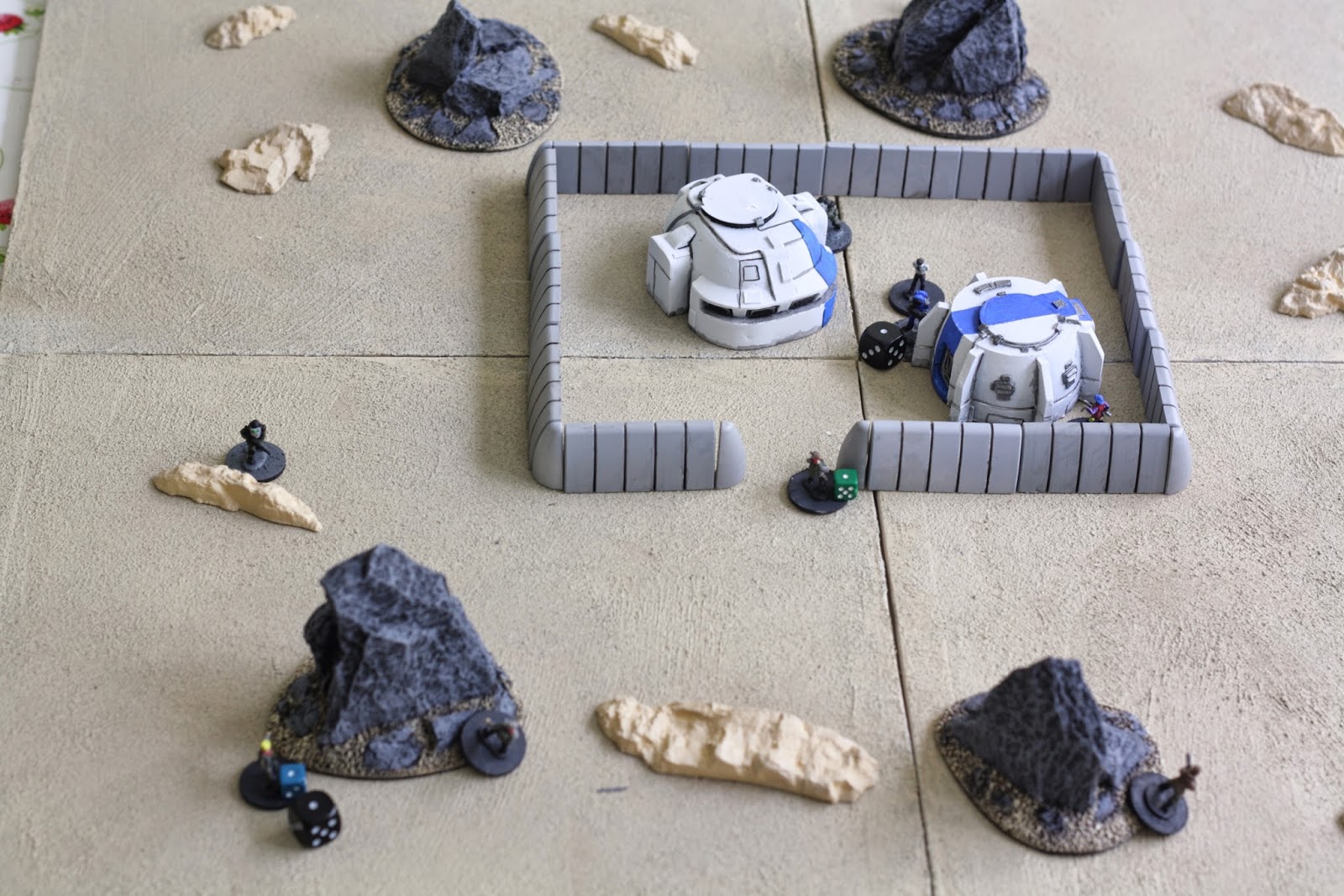 The next two turns were a gun-battle, lots of shots were traded, the fixer leader taking a wound and the bodyguard of The Baron is knocked down. 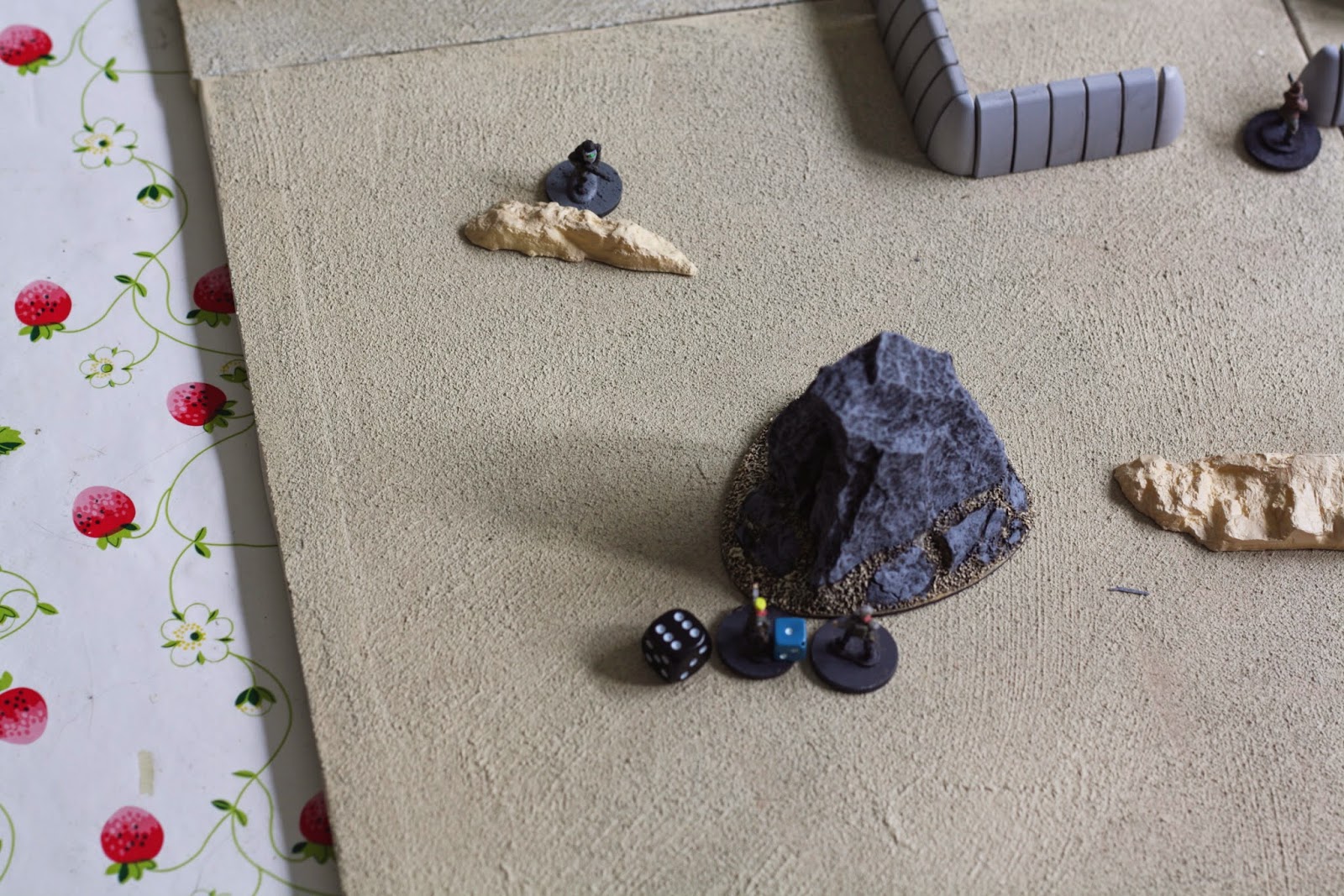 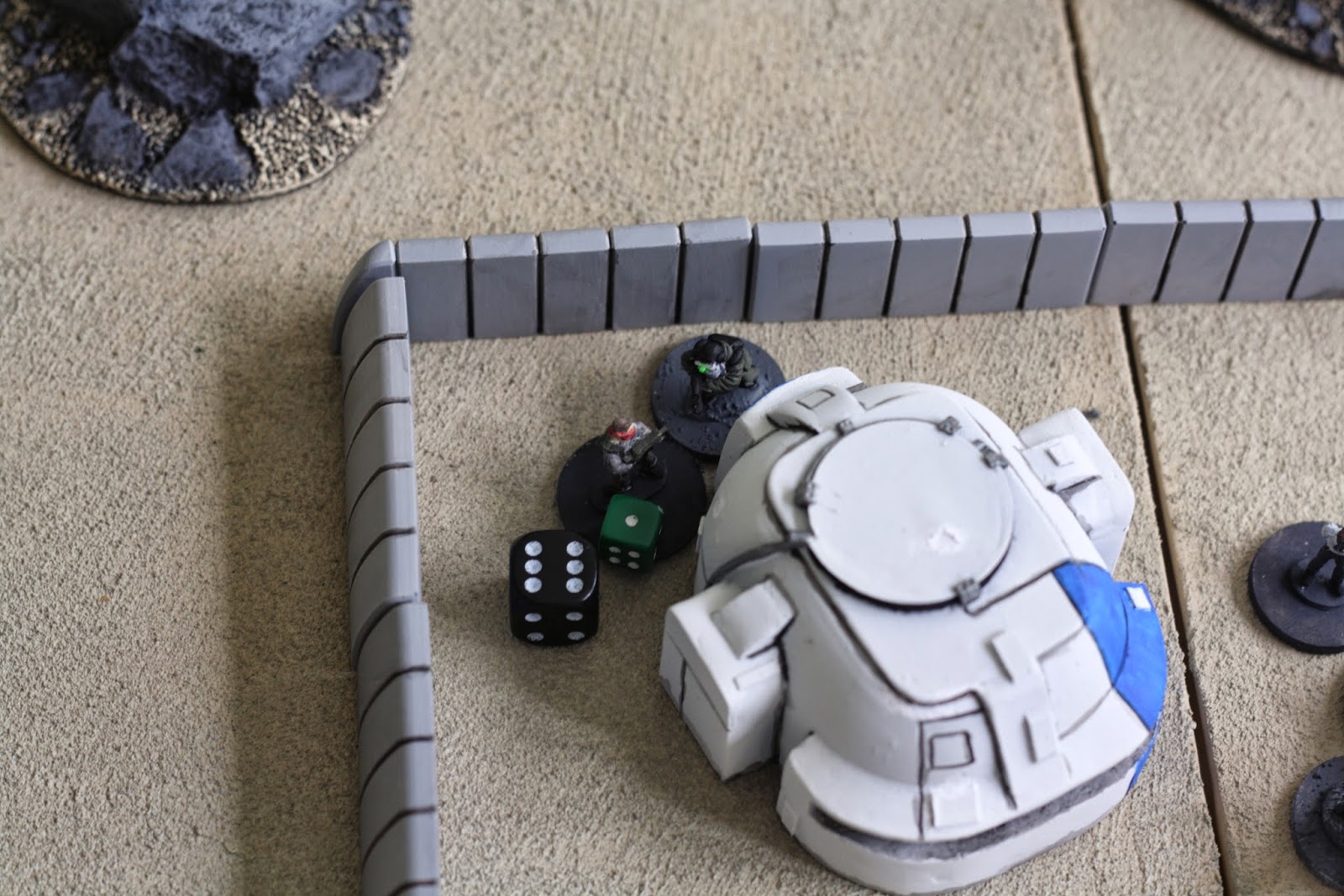 In a catastrophic turn of events, both the leader and the fixer by the gate was taken out. Control Troopers are tough customers in close quarter. 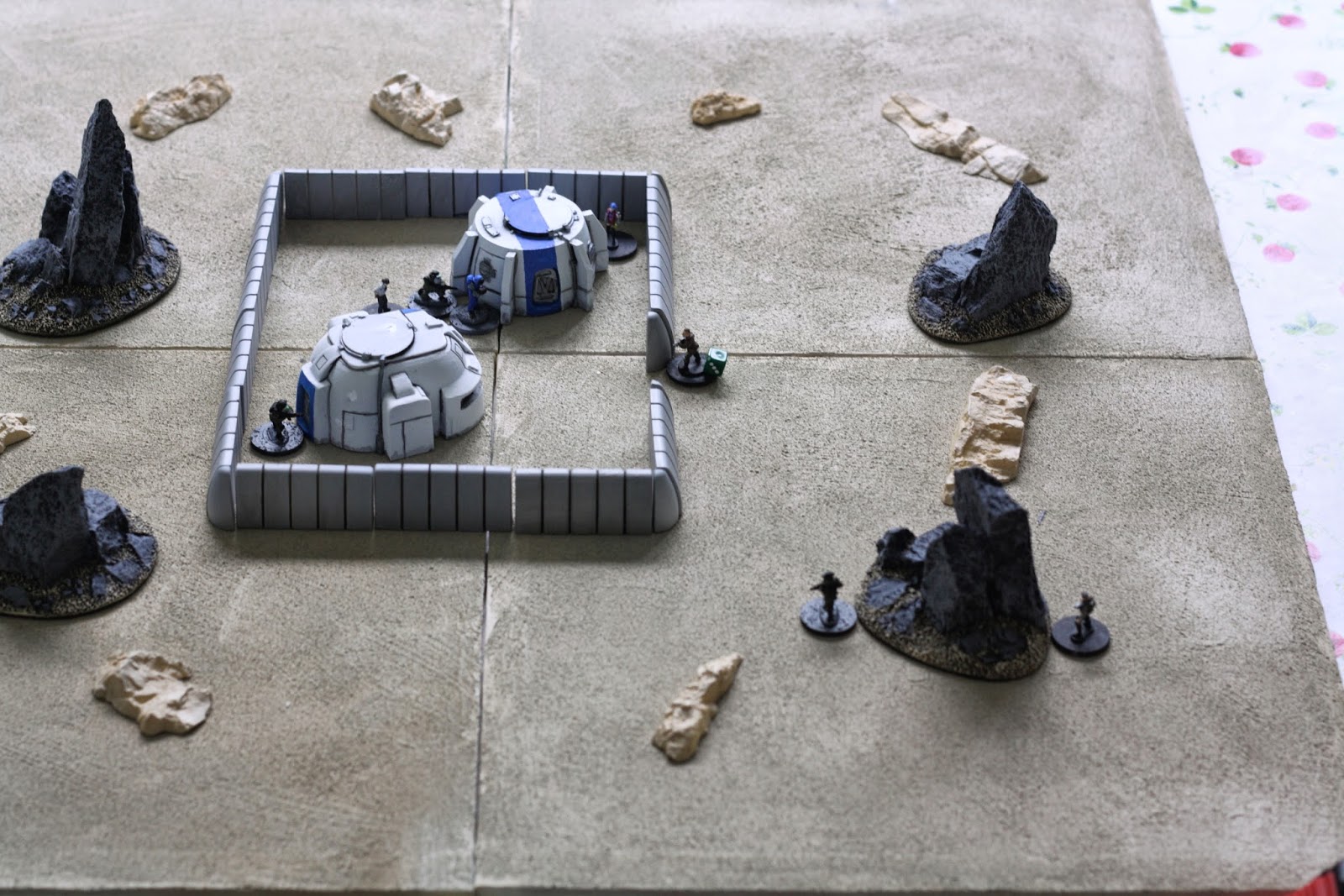 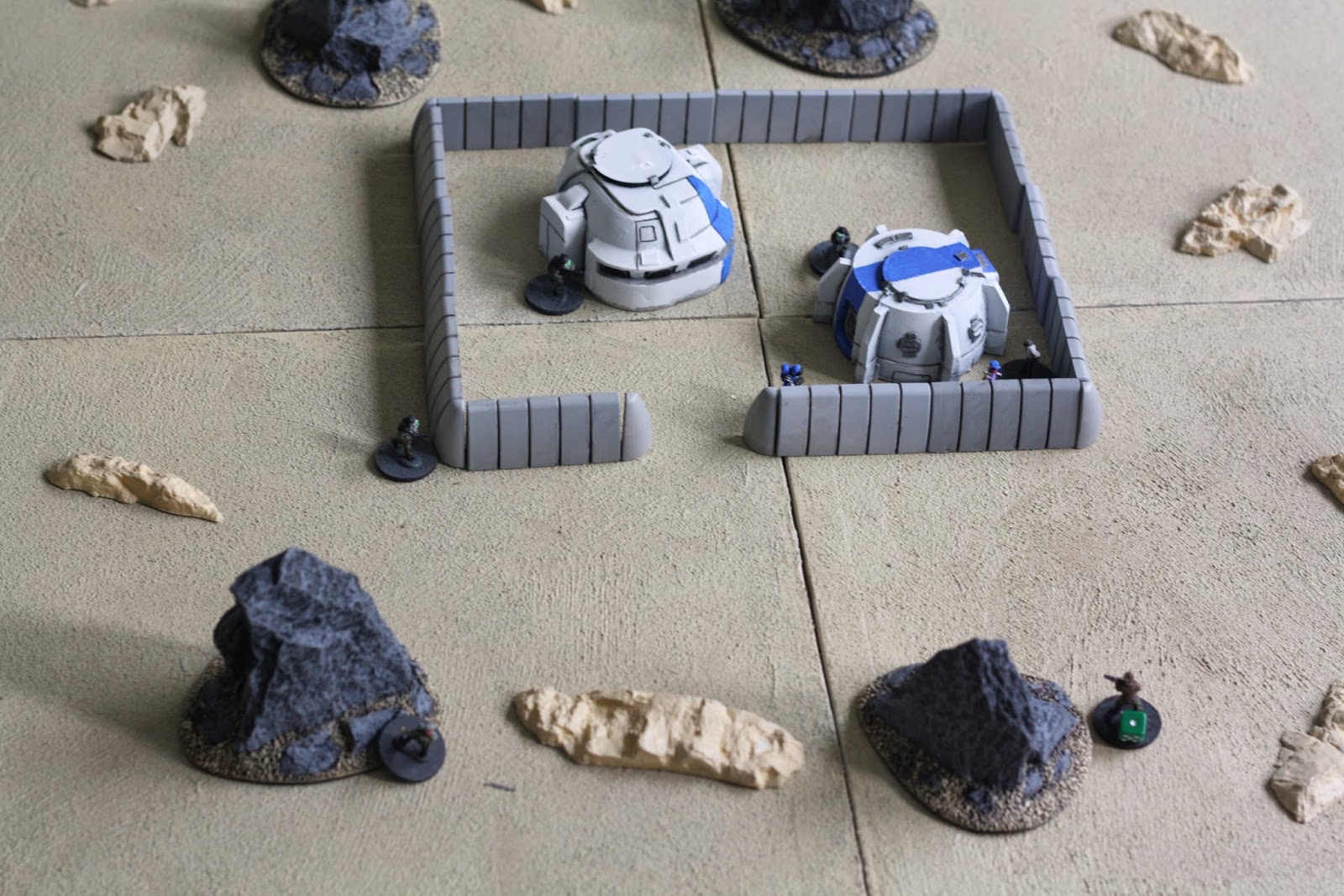 When a scurry turn was rolled for the fixers, the female fixer decided to go for the hostage. Going behind the back of the Control Troopers stuck in a firefight with one of her companions. 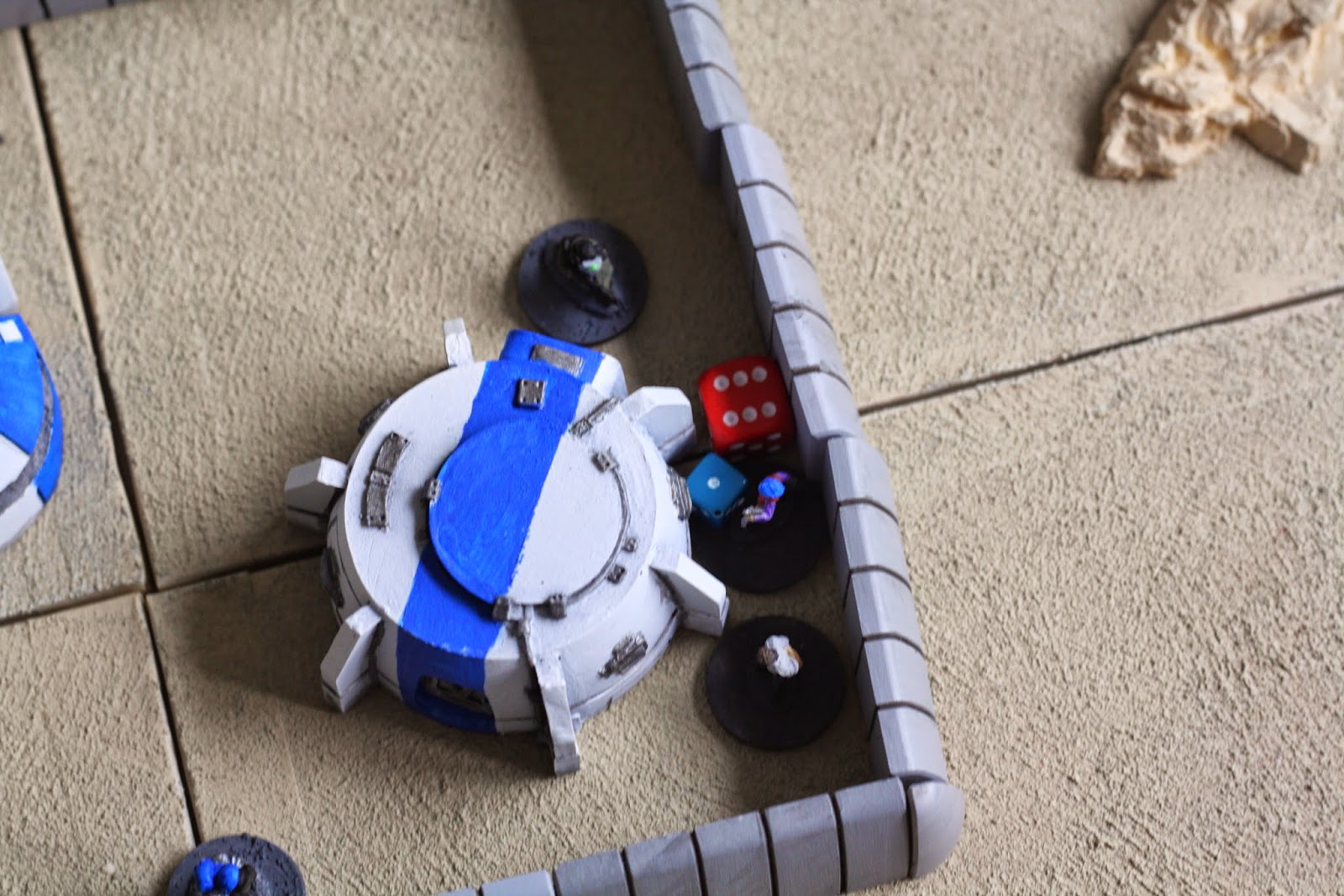 With little room to manuver, the Control Trooper manages to shoot and wound the hostage's escort. 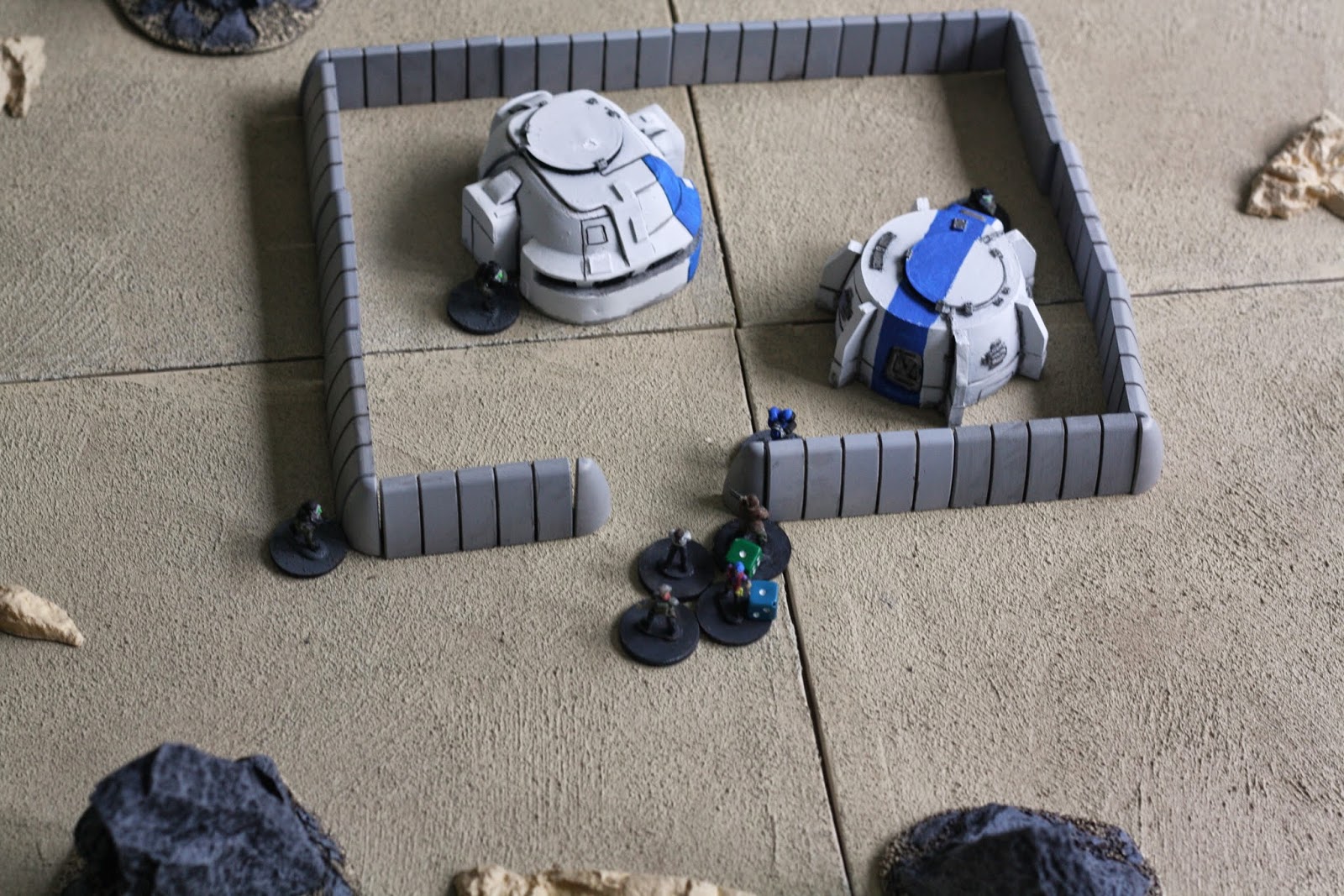 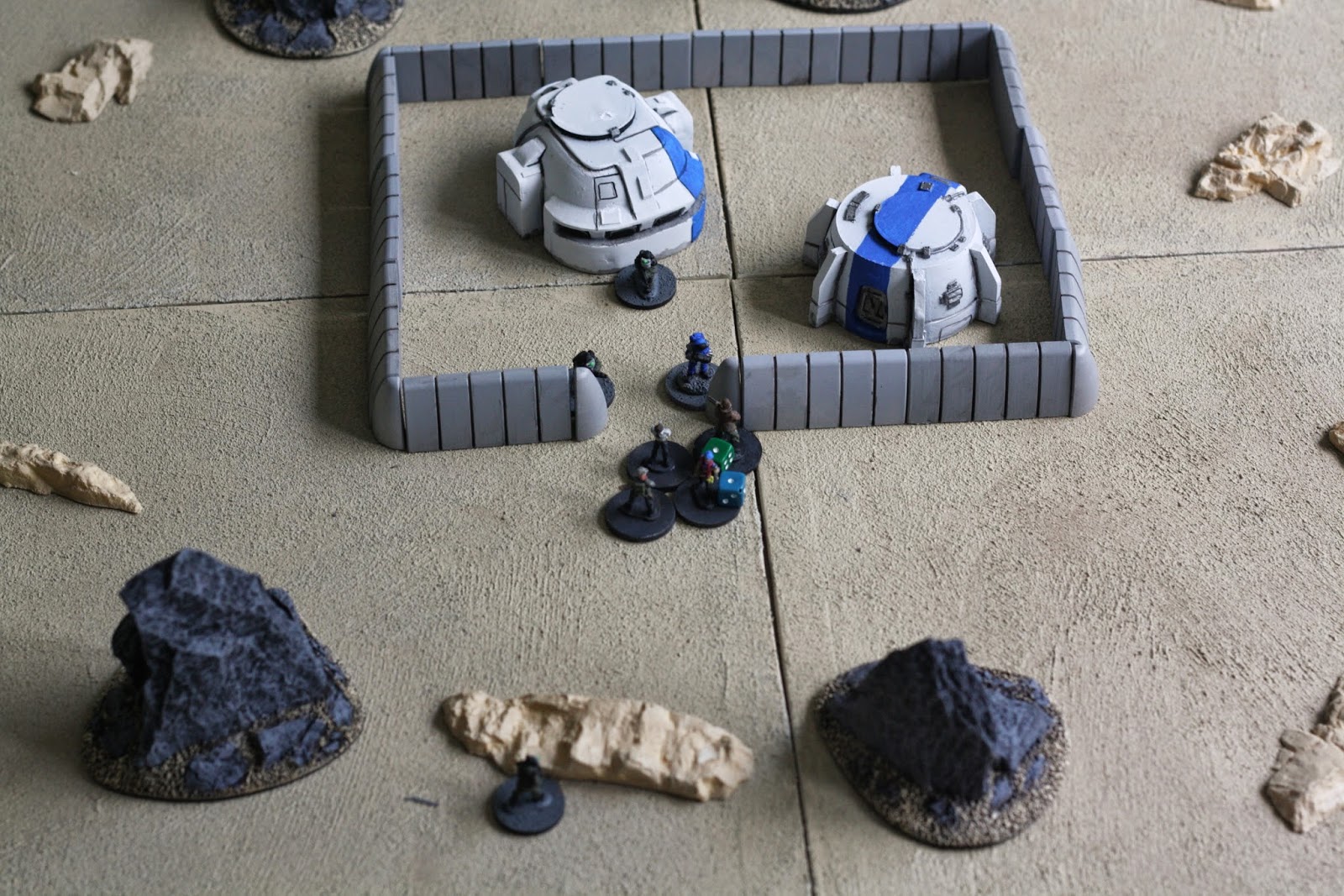 Another scurry round was rolled for the Fixers, they all formed up around the hostage, determined to get him out and complete their mission! 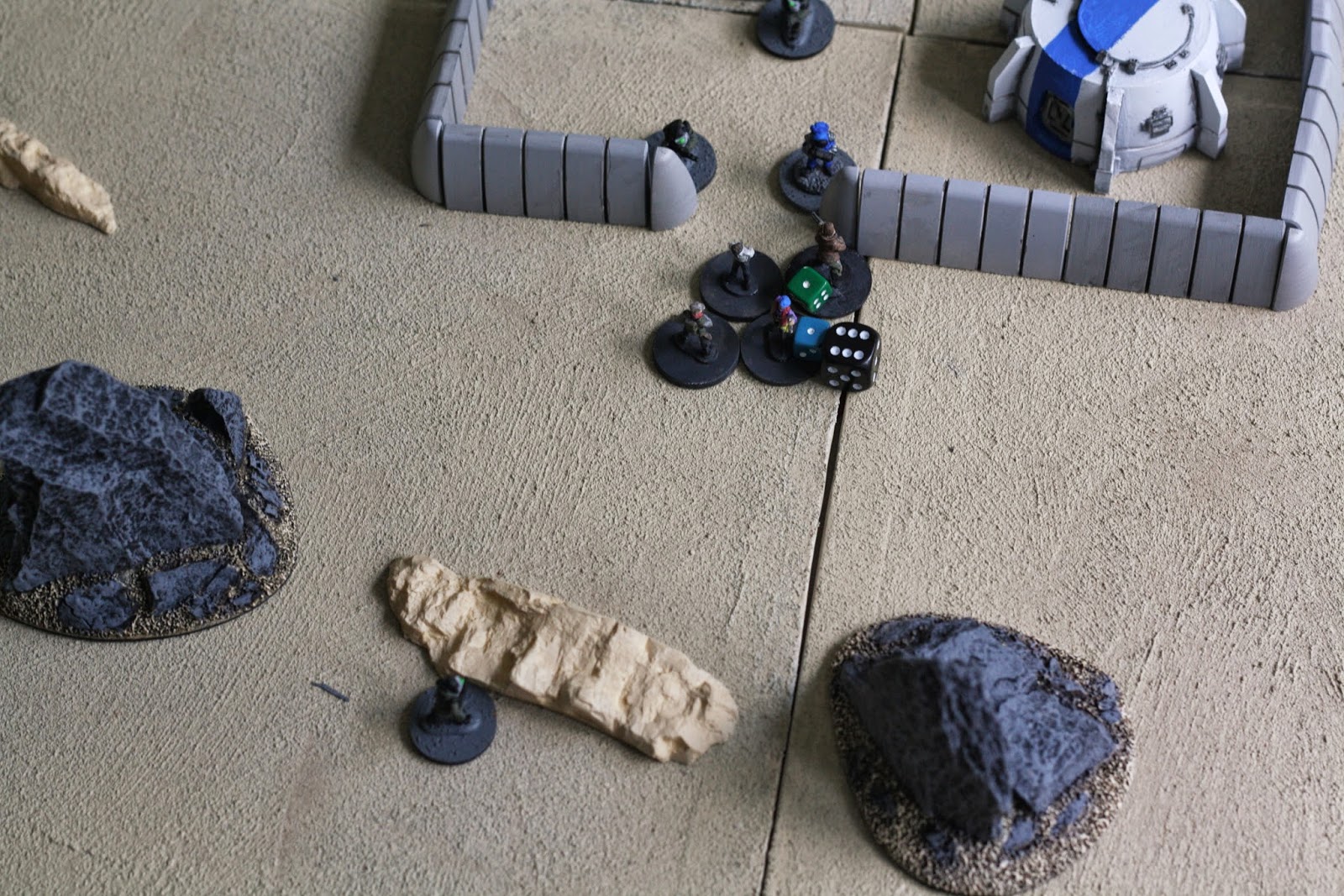 Bullets flying everywere, the kidnappers manages to take down the female fixer that got the hostage out. 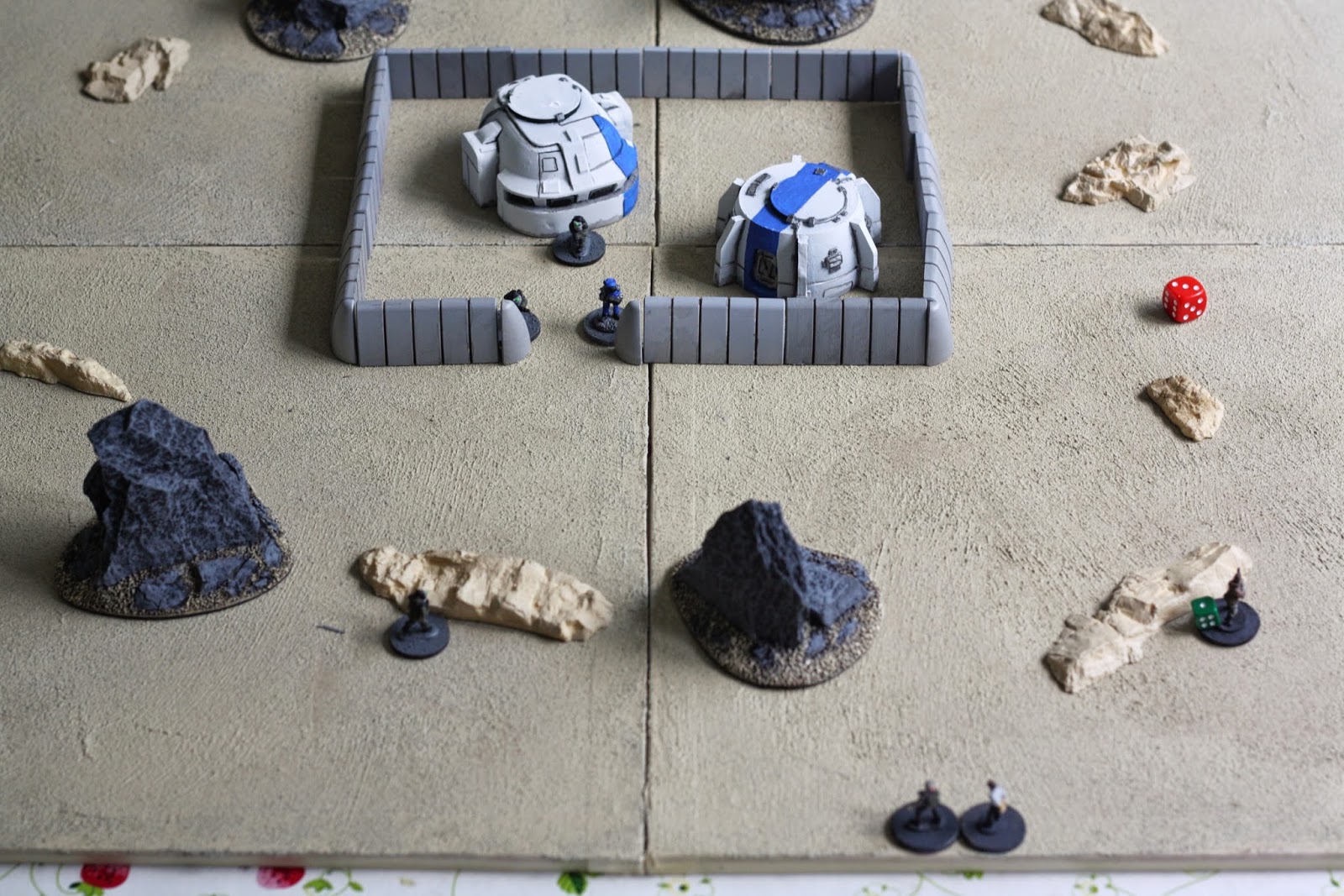 During the last round, once again a scurry is rolled, and with that the Fixers manages to get the hostage out.

It was a win for the Fixers, but it was a costly victory!

As I had figured, attacking a defender in a proper defensive position is Always hard, but I think that the elite status of the attacker, along with the stealth rule helped balancing the scenario.
That being said, if it wasn't for the scurry rounds, the Fixer would probaly not have been able to extract the hostage.

Lately there have been a lot of Gruntz-related stuff being posted on the Interweb, and it does make me feel like "going back to my 15mm roots" as it were. There will be some more posts with my gruntz armies, and possibly a AAR or two..

Hope you enjoyed it!

Posted by Alexander Wasberg at 22:53