The edge is very different to the core worlds around Terra. Sure, there are pirates, a general lawlessness and unspeakable horrors, but there is also a degree of freedom and enterprise for the adventurous sort. Rogue traders and mercenaries rub shoulders with aliens and regular folk just trying to get by.

The freedom to strike out on your own and seek your own fortune. The sort of freedom that Caleb Isaacs and his small team was looking for.

After years of war and service to the imperium Isaacs grew disillusioned with the red tape and vagaries of high command, so he decided to strike out on his own when his term was up. Augustus Couley and Ali Yanaga, his former subordinates, decided to join him. Together they form the independant contractor group "Outer Rim Solutions".

Being their own bosses suited the trio, even if it wasn't always easy. For a few months now they hadn't gotten a promising contract and the coffers were starting to look decidedly depleted. But all this could change in a moment, as it had in the past.

One day not long after, a encrypted message came in to the group. It read:

Caleb called his comrades in to his office to review the message. This might just be what they had been waiting for!
After a short discussion they decided that the offer was too good to pass up, even if the amount made them wary of the possible risks involved.
In the end, they couldn't afford to pass on this in any case..

The next day the contract executor contacted them via comms;
"Greetings. My benefactor is pleased that you chose to accept his contract. I am Mayweather and will be serving as your contact for the duration of the contract."
"Greetings Mr Mayweather, I'm Caleb Isaacs, leader of ORS. In the message you mentioned further details? Would you let us know so we can ge to work?

"Certainly. This contract is a non-exclusive, time sensitive one. Other parties have been contracted as well and only the contractee that brings us the stolen object within a standard month will be elligible for the reward. The object in question is a locked plasteel container. It was stolen from my benefactor and we have tracked it to a planet called Luxor IX. I believe it is where you currently are?"
"I see, we better get started then. Isaacs out."

"Am I the only one who are worried by the lack of information?" Ali asked the other two as soon as the call ended.
"Sure am, but what can we do? We need this. I'll start hitting up my contacts and see what we can find out." Augustus looked to his battle brothers before heading for his terminal.
"I don't doubt this will be tricky Ali, but as Augustus said, we need this. Let's prepare as much as we can, that's all we can do at this point."
"Right boss, let's get too it."

The next day, Augustus had come through. He had found somebody that claimed to know about this plasteel case that came from off world. A meeting was set up at a local cantina.. 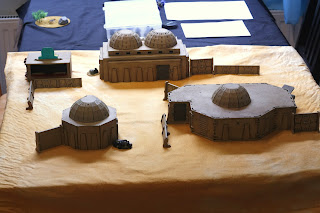 The cantina where the meeting was to take place. 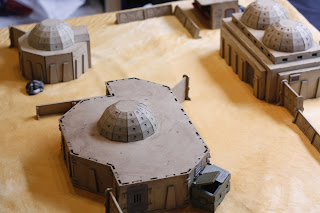 A few houses that surrounds the bar. 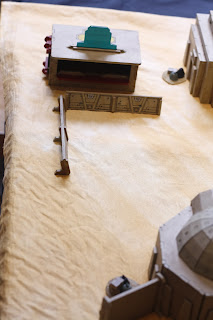 At the end of the street there is a Git Burga, a popular fast food franchise. This makes a good spot for Ali Yanaga to set up his overwatch. 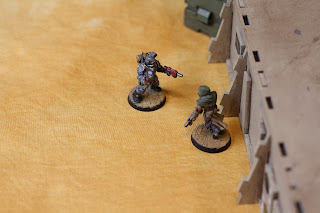 Augustus meets up with the contact behind the cantina. His contact belongs to the local gang the green hoods, a group of thugs, criminals and deserters. The contact seem jumpy and keeps looking over his shoulder, as if to see if he was followed. 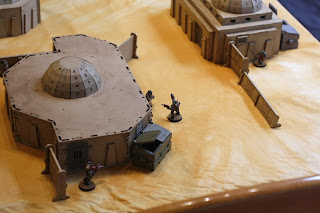 As Augustus tries to get the information out of the cagey thug, Caleb starts sneaking from the side entrance of the cantina. Across the street he thinks he spots another green hood. 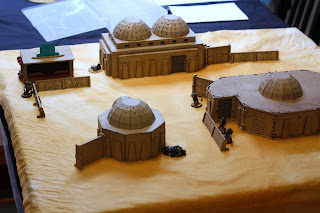 Ali calls his team over coms"There is a bunch of green hoods coming out of the bar, this might get hairy.." 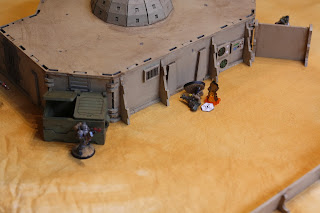 As the comms dies down, Augustus finally presses the green hood contact. Rather than trying to share anything useful, the thug goes for his autogun!
Scrabbling to get to cover behind a close by dumpster, mr Couley aims and fires his plasma gun at the traitorous hoodlum. The superheated plasma rips into the man, his screams slowly fading as he falls to the ground. 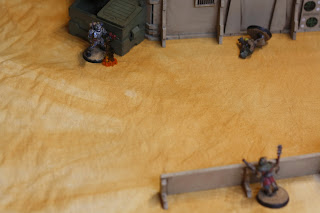 Hot lead slams into Augustus from his flank, finding seams in his armor as blood starts flowing. He grunts and grinds his teeth agaist the pain. This must have been as setup, they seemed ready for the team! 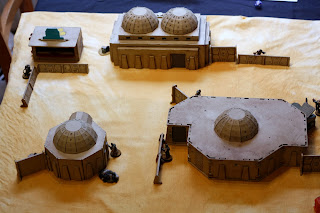 On the other side of the bar two of the green hoods are blasting the barrier that Ali is currently crouching behind. Lucky for him, the aim of the thugs are not good enough to hit the marksman. 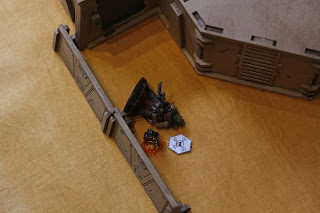 Using the advanced scope on his hot-shot lasrifle, Ali send a bolt of death nearly blowing the head off the shooter. 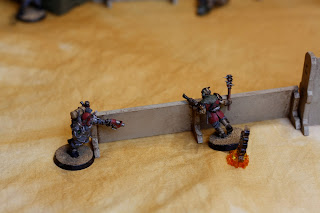 With a burst of speed, Caleb Isaacs closes on the hoodlum that shot Augustus. His bolt pistol rips a chunk out of his target, but he keeps coming. 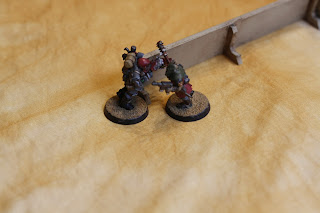 Smashing into the team leader, the green hood member and Isaacs struggle, locked in close combat. 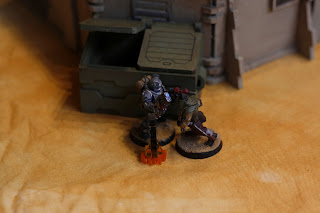 Distracted from his wounds and Calebs charge, Augustus is unable to fight off a charging hood member who further injure him! 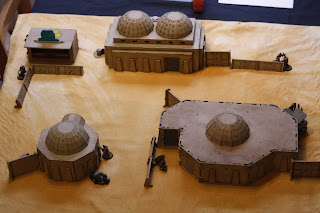 The battlefield after the second round of combat. 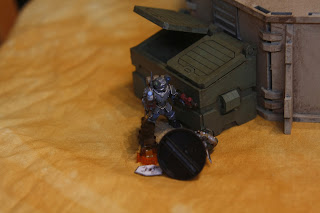 Summoning strenght to fight off his attacker, Augustus knocks back the thug and fires several shots. The green hood member goes down hard. 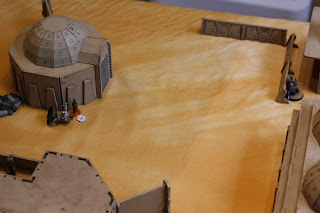 Mr Yanaga ducks down after his shot, sneaking behind the barrier to get a better shot at his final attacker. Popping up again, his lasgun fires and silences his enemy. 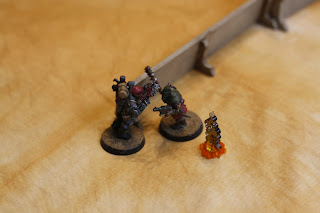 His chainblade whirring, Caleb cuts into the struggling thug. With the rest of his members down or dead, the last thug throws down his weapon in surrender. 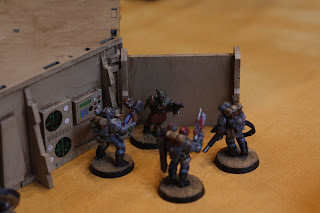 "I give up,ok! I'll give you what you want, don't kill me!" the gang member cried out as he was dragged to a barrier behind the bar as the team gather around him.
"Speak." Isaacs spoke, his tone low and dangerous. "Alright, alright! If you go into the desert west of here, after about 30 minutes there is a small rock next to some bushes. You can't miss it, there isn't any other vegetation for a klick from it!"
"See, that wasn't so hard, was it?" His pain evident, Augustus put on a brave face until the green hood had turned and run.

After having his wounds tended to, Augustus and the team starts the trek into the western desert to find their prize.. 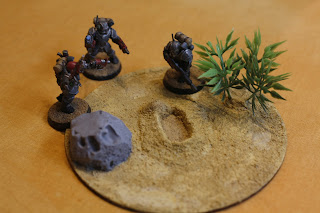 But it seems somebody else already beat them to it!
"I knew it wouldn't be this easy, not for that many credits.." Ali shook his head.
"Hey, what's that?" Augustus asked as he bent down at the edge of the dug up mound of earth.

There was a small metal pin, with a design he didn't recognize.
It might be nothing, but it's the only clue they have at the moment..

I hope you liked the first part of this series!

Posted by Alexander Wasberg at 00:49