Not all giant robots are created equal


I was recently asked a few questions about the new plastic heavy gear models I wrote about in my last post, so I'll endeavour to answer them, along with some photos comparing them to some of the other models from various ranges I have.

I'll start with the easiest to answer; Where did I get them and what was the damage?

Heavy Gear has been around for some time, but for reasons unfathomable to me, it hasn't really got the traction you'd expect from such a long-running line of models. I ordered my 2-player starter box from the company website (link to store page) since the only other option I could find was ebay and that option was no more or less expensive.

The box itself is 90 USD, one of the more expensive single purchases I've made since turning away from 40K and Warmachine/Hordes. But for that price you do get 27 mechs (14 northern and 13 southern as well as 3 drones for the south) and also the Heavy Gear Blitz rulebook. Each mech comes a selection of weapons and extras and most of them exept for the heavy mechs can be posed either standing or moving thanks to some extra leg parts.
The drones will most likely come in handy somehow and the rulebook is a nicely produced soft cover for my rules collection, even though I'm not sure if I will ever actually play it.
Good value for your money anyhow, with the average cost per mech being 3,3 USD and that's not including the rulebook and the remotes.

Living in Sweden means that shipping from the US is a mixed bag, some companies have pretty good flat-rate charges, while other are quite expensive. DP9 sadly falls in the latter category, with the S&H charges ending up at 33.95 USD for the shipping to Sweden.

While it feels a bit excessive, the average cost per mech is still only 4,6 USD even with the S&H included. That means they are still quite a bit cheaper than a lot of other offerings and they look great to boot!

That being said I'd probably never place another order unless I was getting more than a few mechs, to offset the high shipping charges.


Now to the next query, how they look next to models from other ranges. The heavy Gear mechs are 10mm models, or about 1/144 scale. I scrounged up some models for some comparison shots, the non Heavy Gear models will have manufacturer as well as their intended scale listed 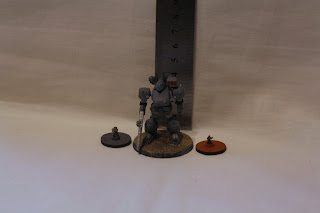 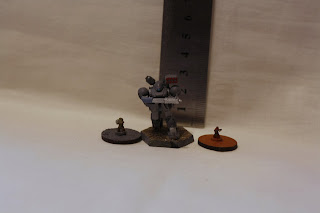 Left to right we have: GZG Japanese infantry (6mm), HG Jager and an Onslaught Hellborn Cultist(6mm). 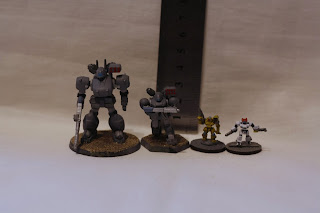 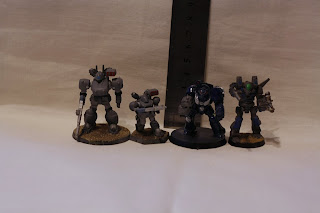 Left to right we have: HG Spitting Cobra, HG Jager, GW Space Marine Terminator(28mm) and a EM-4 Mech(not sure about the scale on this one). 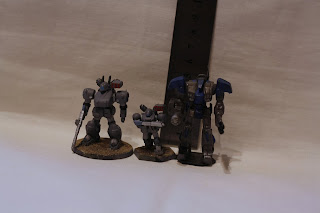 Left to right we have: HG Spitting Cobra, HG Jager next to a Reaper Cav Halbeard (10mm). 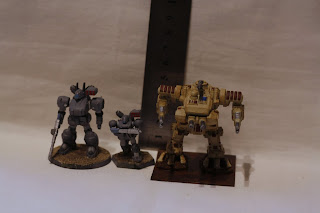 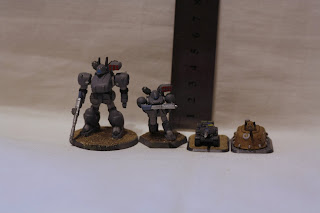 Finally we have a shot of all the mechs( + the terminator) arranged by height.

I hope this helps anybody that were wondering about the HG Mechs, if you have any more questions I'll try to answer them as well!


Posted by Alexander Wasberg at 01:25