With the first battle between the giant mechs a close thing, both the Yellow Big Boy and Khaki Firebug decided they might need some help tackling their opponent. In the lower left corner we have the Dachô (in red) joining forces with Big Boy for this battle. In the top right corner the Warbot (in green) has sided with Firebug. 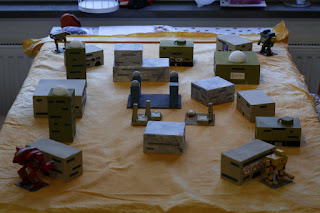 Not far from the site of the last battle, the teams line up on opposite sides of district. 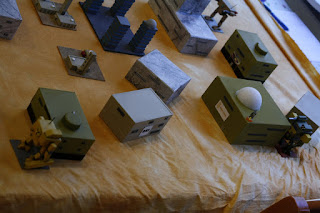 The first missiles from Big Boy hit the side of the house. 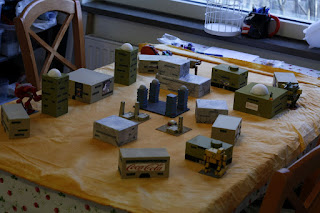 The others move up along their respective flanks, plasma cannons charged and ready. 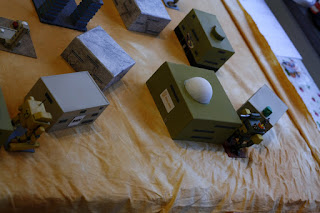 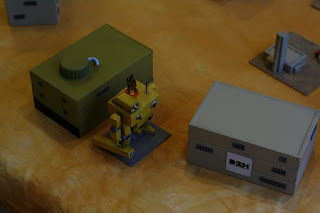 The Warbot and Big Boy exchange fire, scoring a few hits each. Warbot's targeting computer is damaged, meanwhile Big Boy is shocked and his systems starts rebooting, leaving him unable to do anything next round! 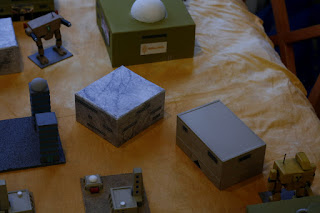 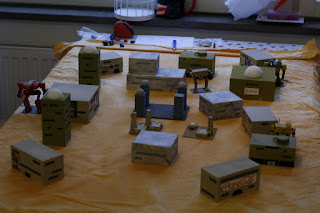 With a chance to deal some real damage, Firebug and Warbot seems to have the advantage.. 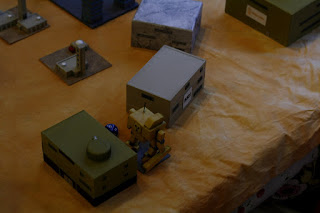 His system is still re-booting leaves Big Boy in a exposed state.. 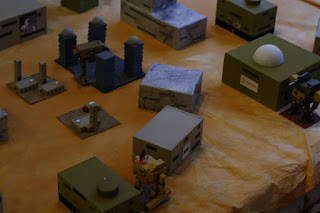 ..But as not as unfortunate as he looked at first glance. While Warbot manages to score some telling hits that leaves the rotary cannon wrecked, Firebug can't manage to close into firing distance! 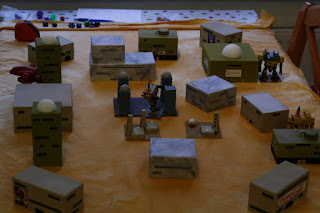 Finally getting a break, the red mech, the Dachô is able to target the exposed back of Firebug with his missile launcher. Not only hitting, but managing to scramble the mechs targeting systems with a critical hit! 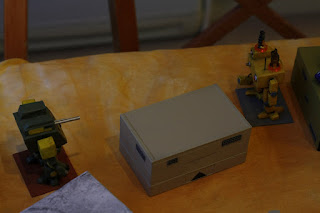 Keeping the pressure high, a volley of ballistic and missile hits again rock the yellow mech, causing it's big missile launcher to explode right in it's hand.. 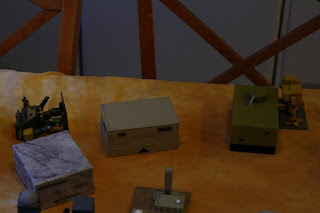 ..Big Boy gives as good as he gets though. Launching a spread of missiles from his single funcional weapon, he knocks Warbot over with a series of well placed blasts! 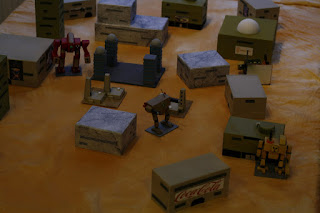 Firebug now faces a hard choice; Does he turn to face and slug it out with the fresh Dachô, or press on against the damaged Big Boy, hoping to get into range and possibly finish him off? Going in for the kill, he fires a single plasma cannon, melting the final weapon off of the ailing yellow mech. 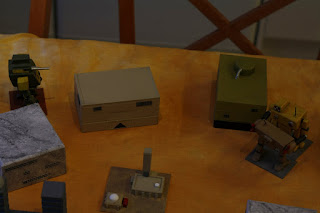 While Warbot gets back on his feet, Firebug and Big Boy smash into one another. 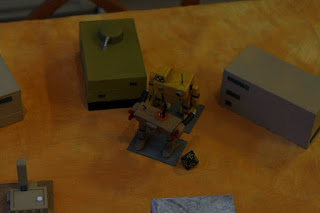 In the ensuing brawl Big Boy gets the upper hand, dealing some damage to his opponent. 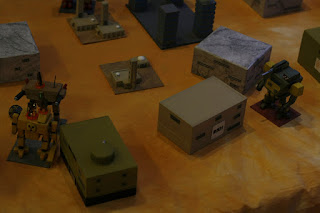 Point-blank plasma cannon rounds and a barrage from the green mech finally brings Big Boy down, giving a slight edge to the temporary khaki/green alliance. 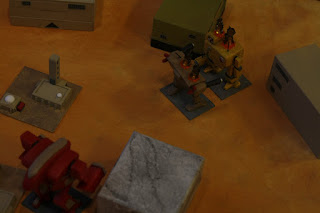 Reaching optimal firing range as his foes are distracted, the Dachô opens fire with all he's got. Searing plasma and missiles slams into the back of Firebug, causing system chock and forcing a reboot! The Kakhi mech is really on his last leg now, and not in a favorable position. In that single strike, the red mech took the initiative and the advantage from his foes! 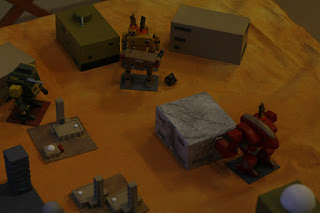 Having fired both his cannons at once he is now reduced to his single missile system as the plasma cannons recharge. Over-eager, or perhaps over-confident, he misses the rebooting Firebug.
Quick to take advantage of this lack of incoming fire, Warbot strides forth, firing all he's got.
Autocannon rounds tear into the hulking mech, ripping armor and damaging targeting systems, just as Firebug is coming back online.. 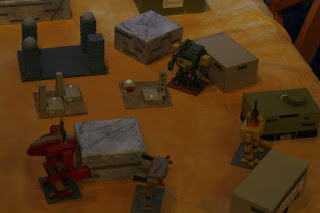 Pushing the reactor to the max, Firebug turns from the smouldering wreck and charges into point blank range, before unleashing both plasma cannons into the face of the enemy.
The damage is extensive, and though he fails to completely disable the enemy mech, the damage is bad enough for the Dachô to surrender before being destroyed.

Victory for Firebug and Warbot!

It was interesting to play a game with more mechs, as this made all the choices more important. I'm pleased to see that my initial idea of using a big mech and some support units per side looks pretty feasibly now that I've seen a few units in action at the same time.

I'm still working on the support units, it will probably be some traditional units from my various armies for the fringe-setting.

The work on the next few terrain tiles are coming along, I have a few more buildings to make before unveiling them though.
In space combat featuring mechs I think I have hit on a workable way to handle movement that makes it fun and different from the regular movement in Horizon wars, even if it in no way simulate newtonian movement as that would take too much fun out of the game and make it much slower. So I hope to share that soon, I need just need to test it some more first!

Posted by Alexander Wasberg at 12:01