Another set of Giant Stompy Robots, and the beginnings of the 5th terrain tile

As I finished up the last pieces for another set of smaller mechs, I decided to finish up the paint on two more of the giant stompy robots I've been working on: 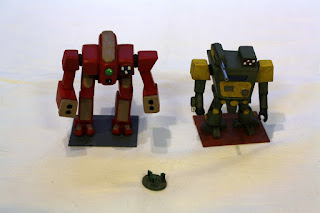 The two mechs, with a Zephyr infantry unit for scale. 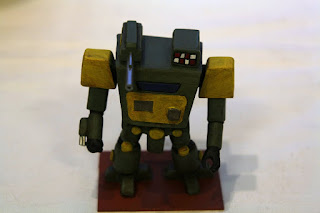 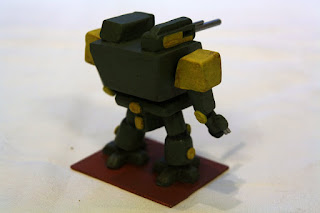 My interpretation of the MORAV robot that I was recently tipped off to by Stroezie on the TWW forums. I decided to keep some of the design elements, but I changed up some things, including but not limited to the shape and size of various elements and made a bigger shoulder cannon. Unnamed as of yet, he wears the colors of Zephyr, just in case he is needed in Horizon wars at some point. 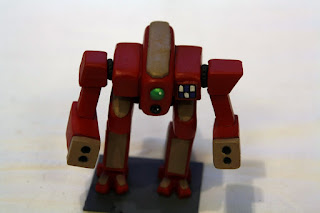 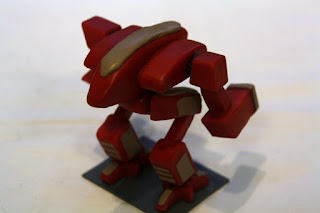 Inspired by some mechs I saw on various art sites and one of my favorite battletech mechs, the Marauder, this robot came out quite good. It's was also dubbed the best of the 5 I've put together so far by my lovely wife, so it has that going for it as well!

When putting the mechs away I managed to drop the red one, and it came apart in a few places. Thankfully my wife was kind enough to pick up some more glue for me on her way home. Thanks to her, I managed to put humpty dumpty back together again and with some touch-ups he is good as new!


I haven't managed to finish up a terrain tile this week, but I've laid the groundwork for one: 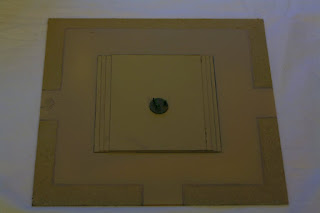 As usual I've laid out the roads and ground texture. The central platform will hold an admin building of some sort, a combination of city hall, judiciary and the like.

Over the next few days I intend to finish up this tile and make the building that will sit on it as well. I might even manage to paint up the first few of the new mechs too..

Til next time!
Posted by Alexander Wasberg at 23:55