Having spent most of my time the last week or so watching everything VOTOMS once again, I started to feel in the mood to make some more battlefield set dressing for my mechs to fight over.

Starting out small, I made what i intend to be the first pieces of a military installation, not unlike the Assemble EX-10 on Kummen.. 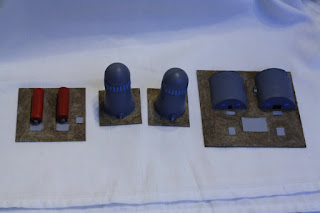 These first pieces were more or less just proof of concept models for me, making sure that the chosen pieces of layabout trash I had gathered could be fashioned into a few believeable pieces.
Judge for yourself if that's the case ;) 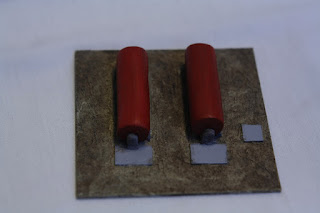 A couple of fuel tanks. The design was inspired by both VOTOMS and a game called Just Cause 3 that I've been playing recently. I'm currently trying to figure out if there is a good and fairly uncomplicated way to make a set of stairs and a walkway over the tanks.

Some simple guard towers/TAC towers cobbled together from some plastic shot glasses, soda bottle caps and a clear plastic dome of some sort. The door and frame was made with some air-drying clay. 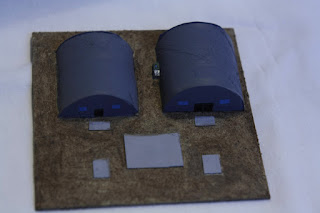 The Quonset huts can easily serve any number of roles, from barracks and med huts to offices, storage and even command posts.These are the only piece I'm not that sure about, but that might be due to my inability to cut straight when fashioning the end pieces of each one more than anything else. 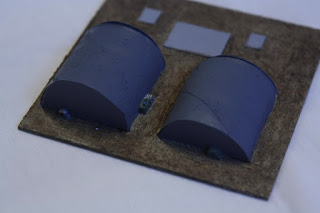 Made out of a paper roll core cut in half lenghtwise with card end pieces to make the back and front walls, they were at least easy to make. The concrete slabs are made from the same card as the back/front. I know they are kind of hard to see, but the small units on the back and side of the huts are supposed to be power/ventilation units, mostly there as I wanted to try and make some sort of detail.

I've seen many people make Quonset huts out of soda bottle caps cut in half, so I'm still not sure which design will win out in the end, maybe I'll even mix!

I have this idea heavily inspired by the great works of Michael from Angel Barracks, using keyboard keys to make wall-sections for this base project. It's still firmly in the ideas stage, but hopefully something will come of it. Only the future will tell ;)

That is all I have to share for today, hopefully I'll have something fun for you again soon, as I plan for the NTC and the NIJA to butt heads again!

Til next time!
Posted by Alexander Wasberg at 02:01