Counter attack in the badlands


After the initial success in striking at the SADU experimental field trials, the NTC combat team falls back to meet up with their escorts.

It's a long trip through the badlands to get back to their own outpost in these parts, and somehow the commander doesn't think the SADU will give up so easily..

About an hour later, still in the badlands: 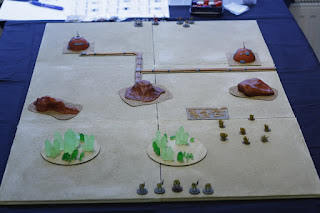 The NTC commander's suspicions are confirmed when his scanners pick up mech signatures across from his unit. 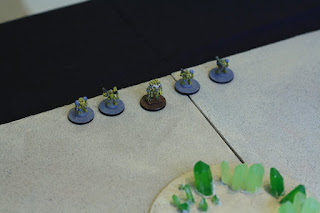 The commander and his team, along with the two extra escorts. 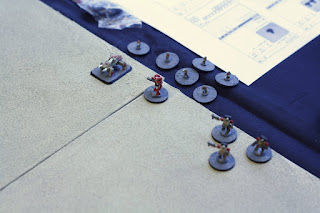 The SADU interception team of Turtle-class mechs, led by another experimental unit, EX-02. The anti-mech infantry rides along in the Antlion walker. 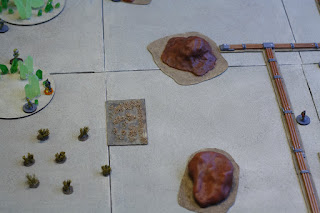 Racing up to the pipeline, a Turtle fires a rocket, and misses.. 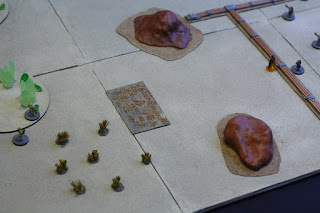 ..But so does the return fire from two of the NTC Warriors. 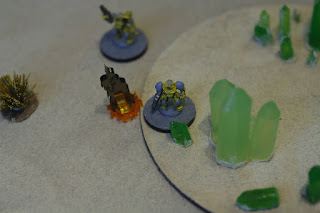 As the other members of the unit joins the first by the pipes, SADU unit EX-02 strikes a crippling blow to a warrior as the targeting computers are damaged! 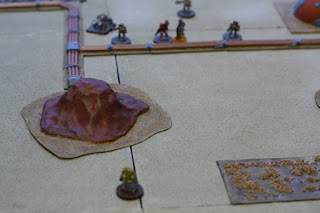 Striding into range, the Demon command mech fires of a salvo of missiles at EX-02. The explosions rips off chunks of the mech's armor and cripples it's legs. A lucky hit! 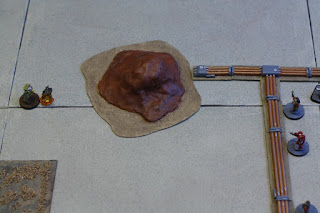 The Demons luck is short-lived however, as missiles from a Turtle hits him and cripples his legs! 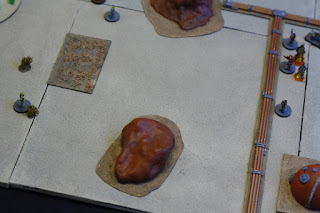 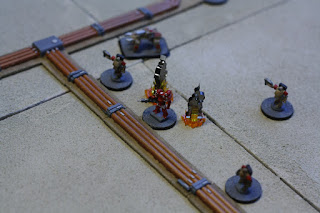 Seeing the chance to destroy another of the SADU's experimental units, the warrior unit equipped with a missile pod moves into position to strike. Auto-rifle fire and missiles impact the already damaged unit, taking it out of action. 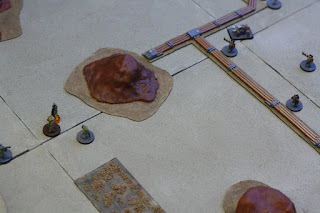 Another set of rockets hit the Demon, damaging targeting systems and bringing it even closer to defeat. 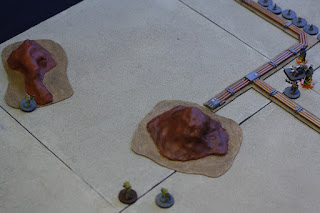 Having found a rocky outcrop safe from the infantry's anti-mech weaponry, one of the NTC escorts open fire on the Antlion. After a lenghty firefight between the two, the Antlion goes up in flames. 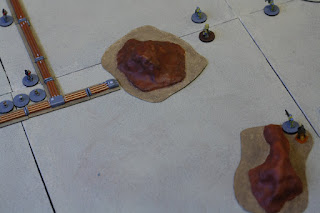 The infantry finally realizes that they wont lure the mech into a fight in the open, so they reposition and attack the escort in cover. A missile hits the mech, but the damage is only superficial.. 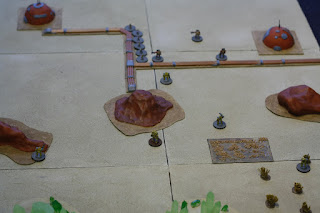 The state of the battle by the start of the 4th turn. 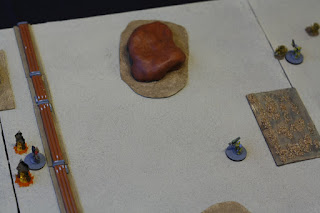 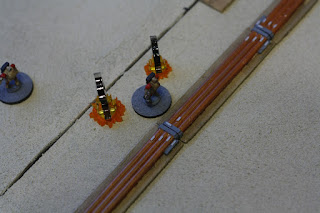 Syncronizing their attack, the missile pod Warrior and the escort armed with a bazooka manages to first cripple, then kill, another enemy mech. 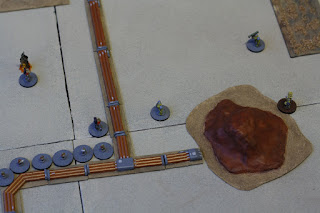 Limping forward on damaged legs, the Demon fires a missile at the only mech in sight. Lady luck smiles on the NTC commander again, as the explosion damages the legs of his target. 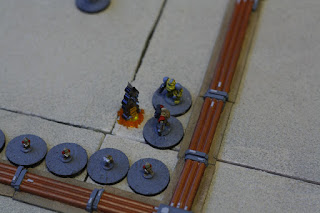 With a busted targeting comp, the Warrior closes on the last undamaged mech, intending to use the powered fist to beat him down. The first blow connects with a screech of tortured metal, but luckily no critical systems damage. Giving as good as he gets, the Turtle punches back, bending a couple of armour plates! 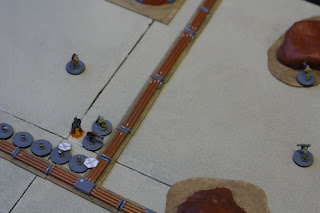 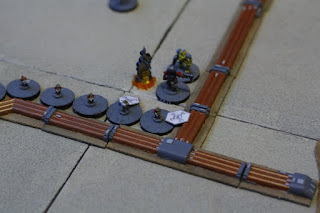 Taking a calculated risk, a missile is fired at the infantry in the corner of the pipeline. Striking true, both CO and missile launcher of the anti-mech infantry are lost in the huge fireball. The Turtle is hit too, blowing off a few critical armour plates, leaving in vulnerable to future attack! 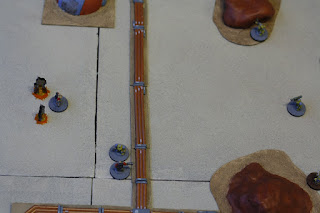 Another one-two punch from the Warriors finish off the crippled Turtle in the open. 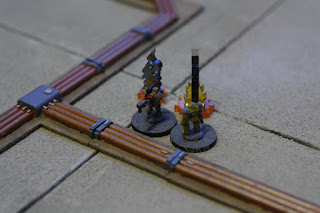 Planting the final powered punch, the cockpit of the Turtle bends inward at an unhealthy angle, and the mech topples over. 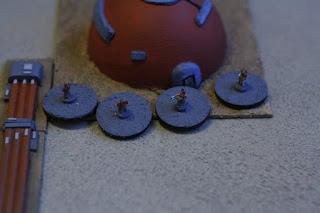 Having realized that the fight was about to be lost, the infantry fell back to one of the domes for cover, and to report back to their superiors. 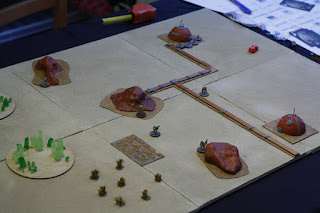 The battle was won, but at a cost. With both command mech and one Warrior critically damaged and another lightly injured, the striketeam won't be able to keep up the pace. With some of the enemy getting away, there's a good chance that the outpost is in danger of attack from enemy forces.
In their current state, they wouldn't be much help anyway. The commander just hopes that they will be back in time to effect repairs before that happens..


A tense battle to be sure, with only luck saving the NTC from any real losses! I've decided to give gruntz another shot before I decide which ruleset to keep using, but next time I'll have a few house rules in play, to try and fix some problems that came up during this game.

I hope you've enjoyed this AAR, next up will probably be the stars of my proposed CoTF mini-campaign and hopefully the last pieces of the military outpost.

Posted by Alexander Wasberg at 01:44