The last game got me in the mood to increase the number of mechs I could field for my 6mm forces.

First we have some NIJA SADU units: 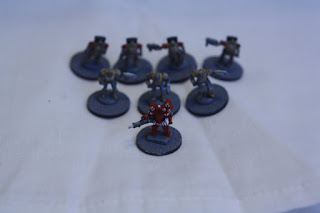 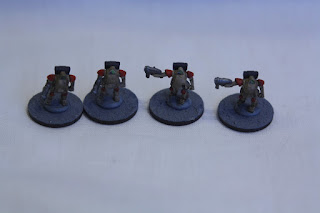 The 4 line units are similarly equipped with a E/W backback, hull-mounted machineguns and carrying a small rocket gun. 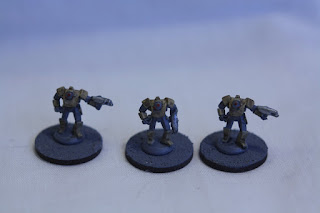 The Beetle is another mass production unit, used for frontline commanders due to it's superior mobility and armour. Primarily used for C&C, the Beetle nevertheless has a heavy rifle and is able to lay down heavy fire when needed. 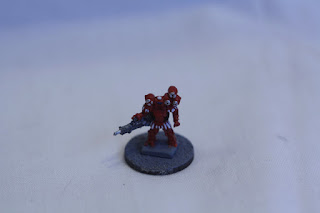 The second unit approved for field tests, the EX-02 hasn't even got an official designation yet. Covered in nano-laminate armour and sporting both missiles and a heavy cannon, the EX-02 will be tested against the best the NTC can muster.


Secondly we have the NTC's new recruits: 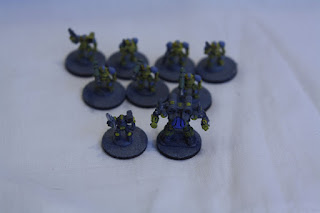 Needing to strengthen their own capabilities, the NTC approved several new units: 7 Warrior-class mechs, 3 of them armed with solid shooter bazookas and two experimental units of their own; the Warrior Custom and the Jotun assault mech. 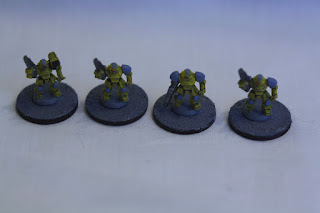 The first 4 Warriors are identical to the units previously fielded, with auto-rifles and 1 unit carrying an additional should-mounted missile pod. 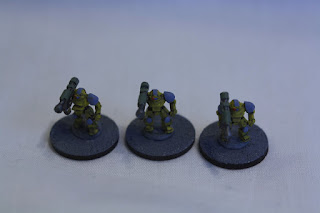 The remaining 3 warriors come equipped with the latest of NTC's anti-armour weapons, the solid shooter bazooka. Designed to fire a hyper-velocity sabot, the bazooka causes extreme penetration and damage to armoured targets, even without an explosive warhead. 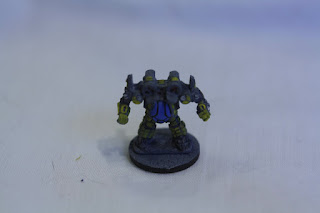 Standing taller than the average mech, and at more than tripple the mass, the Jotun is a real heavyweight by any standard. Armed with missiles, a plasma rifle and powered fists, it can easily smash smaller mechs to scraps. The heavy armour plating makes sure that a Jotun unit reaches it's target, without fail. 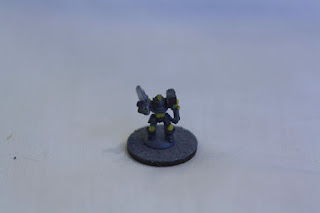 The last NTC unit may not look that different than the standard warrior, but it's difference is more than a paintjob. Rather than sinking even more funds into experimental unit programs, the NTC opted to improve on the basic unit in it's mecha arsenal, the Warrior.
The Warrior Custom have upgraded laminated armour, a stronger powerplant and rewired and improved electronics, allowing an elite pilot to get the most possible out of the versatile Warrior frame. If it'll be enough to take on the experimental units of the SADU is still to be determined.

I've started thinking about making a few conversions, to cover some of my favorite ATs that's currently missing a sculpt. These would most likely be one-off's unless I find a really good way to make the required mods.
We'll see about that in the future however, for now I'm thinking over a few new terrain pieces to go with these and other mechs.

Posted by Alexander Wasberg at 10:00