I've long thought that Horizon Wars should be able to be used as a framework for some Gundam action, particularly during the OYW and the time after.

Using a modified mashup of aircraft and mecha rules, I think I managed to get the quick and deadly flavor of Gundam. A bigger table would have been great, but 6'x3' (180x91 cm) is what I've got and it worked well enough.


A patrol of federation mobile suits had been sent out after a report from a small homestead had claimed to have seen a group of Zeon mecha sneaking about, practically in their backyard. Their outpost commander had sent them out to try and confirm the sighting. 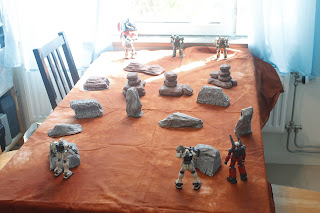 Just after lunch the federation patrol spotted the Zeon units. How had they gotten this close without being detected? 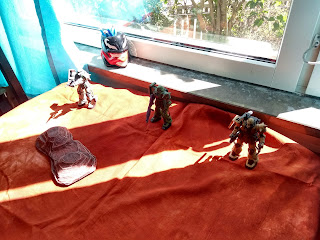 A MS-06 Zaku II with 120mm machinegun and a rocket pack; a MS-06CK Zaku Half-Cannon carrying the 180mm cannon and finally the unit's commander in a MS-06FZ Zaku II Kai with a MP80 makes up the invading Zeon force. 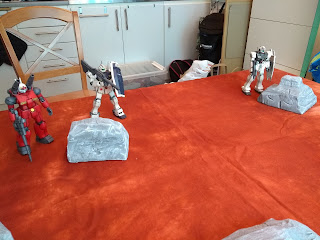 The Patrol consists of the junior officer in a RGM79G GM Command, equipped with a shield and 100mm machine gun; A RX77-2 Guncannon an older prototype model with a beam rifle and finally a RGM79C GM type C with a shield and Bazooka. 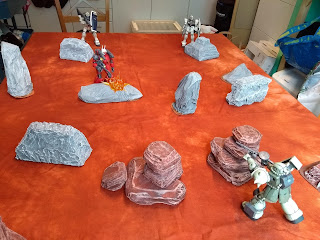 The Guncannon takes cover behind a boulder, waiting for an opportunity to unleash it's arsenal on the Zeon machines. The Zaku II peeks out behind a rocky outcrop to fire on the feddie MS but only hit the rock in front of him. 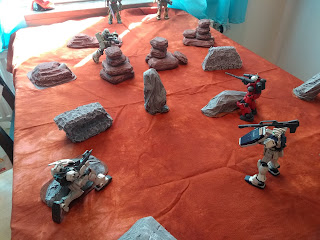 Hoping to support his comrade, the federation officer order the type C's pilot to advance in support of the RX77-2 while he himself did the same, taking a knee and using his shield to minimize his exposure to enemy fire.

A deafening boom tear across the battlefield!
The Zaku Half-cannon rocks digs in as the 180mm pushes him back. 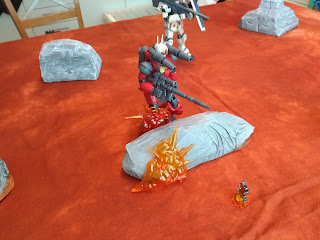 The rockets from the Zeon mobile suit throw up blasted rock and dirt, but fall short of the target. The 180mm shot strikes true however, smashing into the knee joint of the Guncannon! 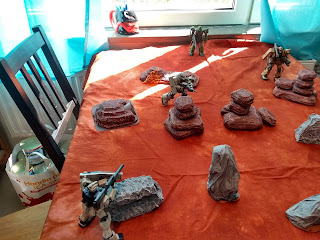 With the focus on the other side of the field, the GM type C moved up and took aim at the Zaku II.
The shot just barely misses as the Zeon pilot dodges out of the way at the last second! 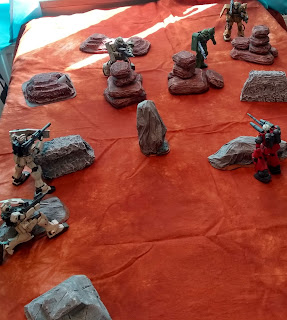 Moving up to keep the pressure on the Guncannon, the Zeon commander fire as the advances. 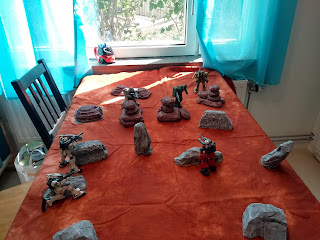 The battlefield at the start of the second turn. 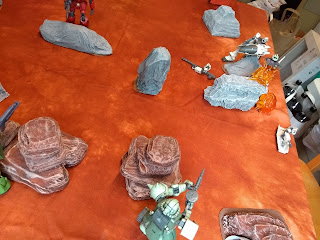 Not to be discouraged, the GM type C quickly reloads and fire on the Zaku II again.
Again, he missed by just a hair.
The Zeon pilot returns fire, expending his 1-shot rocket pack as well. 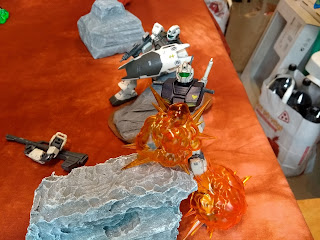 Managing a critical hit along with a pair of regular ones as well, the Type C blows apart in a fireball, bits of it thrown clear of the explosion. 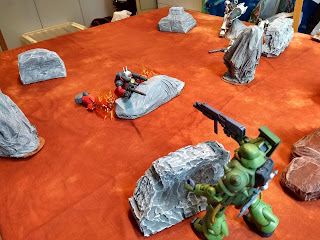 Over on the other side, the Zeon commander used his Zaku II Kai to deadly efficiency.
Accurate bursts of fire blew through the joints of the Guncannon, leaving it immobilized. 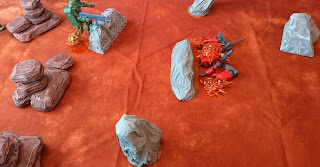 Before the final burst that take the Guncannon out of action, the federation pilot manages to fire off it's beam rifle, slicing through part of the leg armor and boosters of his destroyer! 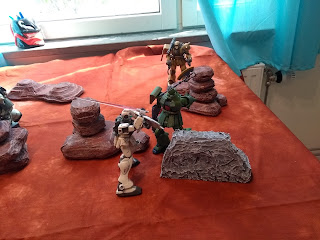 Seeing his comrades fall at the hands of the Zeon invaders, the junior officer abandons tactics and charge at the enemy commander! 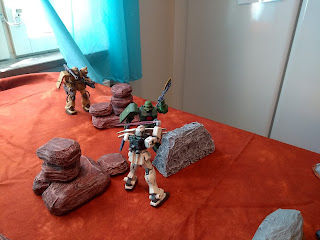 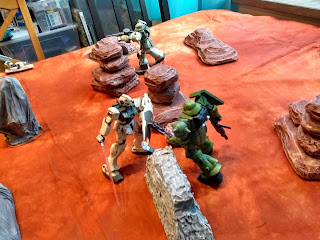 The two commanders face off, beam saber just barely missing and the heat hawk biting into the GM's shield! 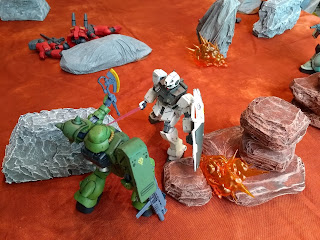 Maybe he was just a better swordsman, maybe it was just luck, but the Junior officer have the Zeon commander at his mercy after the second round of fighting. His temporary madness fades as he hears the broadcast from the Guncannon pilot, wounded but alive.
Booming explosions go off as the Zaku Half cannon fires a warning shot to let the feddie know that he would be next if the commander came to harm. 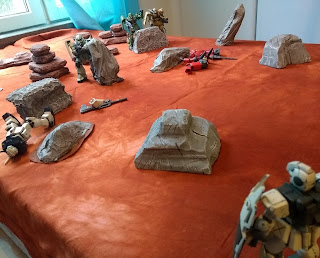 Coming to an agreement, the GM Command is allowed to retrieve his injured comrade and retreat. The commander of the Zeon unit had protested, but his comrades had refused to trade his life for a single enemy junior officer.

Now the local federation command would know that the Zeon military was here. Surprise attacks would be harder to pull off now that they knew the enemy was here.

But no matter. They would know soon enough..

So that was an interesting little playtest. A fast and furious fight! I was unsure if the modifications and house rules would have the desired effect and make the units agile but fragile. It will need some more tests of course but this first test seems to have promise!

Posted by Alexander Wasberg at 02:05