Battle at Giant´s keep; A trial game of Mayhem

Like many others, my first introduction to the hobby was Warhammer. The grand battles that played out on the pages of White Dwarf has always spoken to me, even to this day. Grand fantasy battles is therefore something that is close to my heart, even though I haven't played any games in years.

But when I discovered the plethora of good 6mm fantasy armies, I knew that I would have to give it a go again.


I decided on trying out 2 different rulesets, Mayhem and Mighty armies.


(This is my first game of mayhem, so I might have gotten a few things wrong) 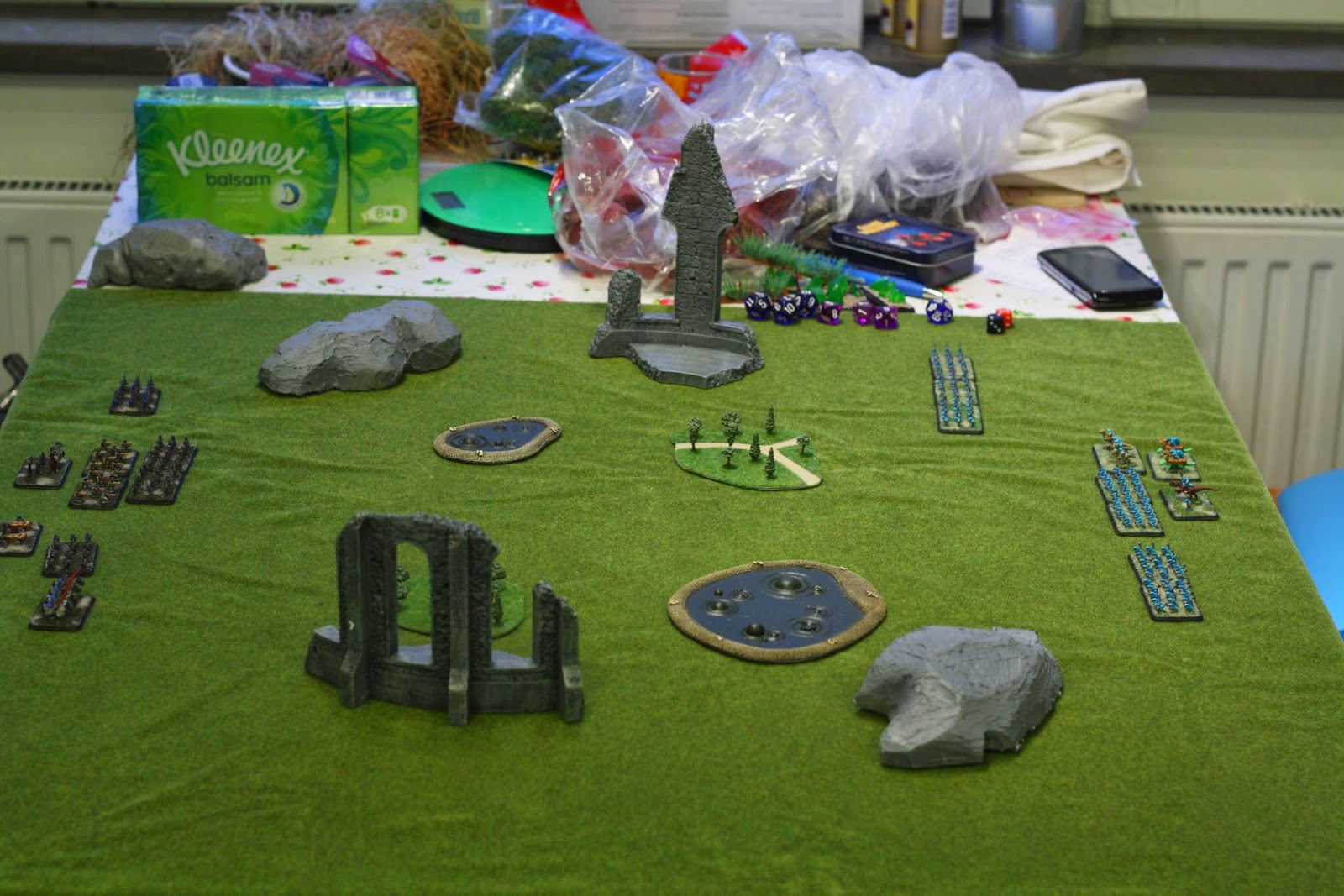 The field of battle, known as the Giant´s Keep. The lizardmen of the Southern regions consider this part of their territories, and the men of Ashen wastes intruders. Unless they turn around, there will be blood. 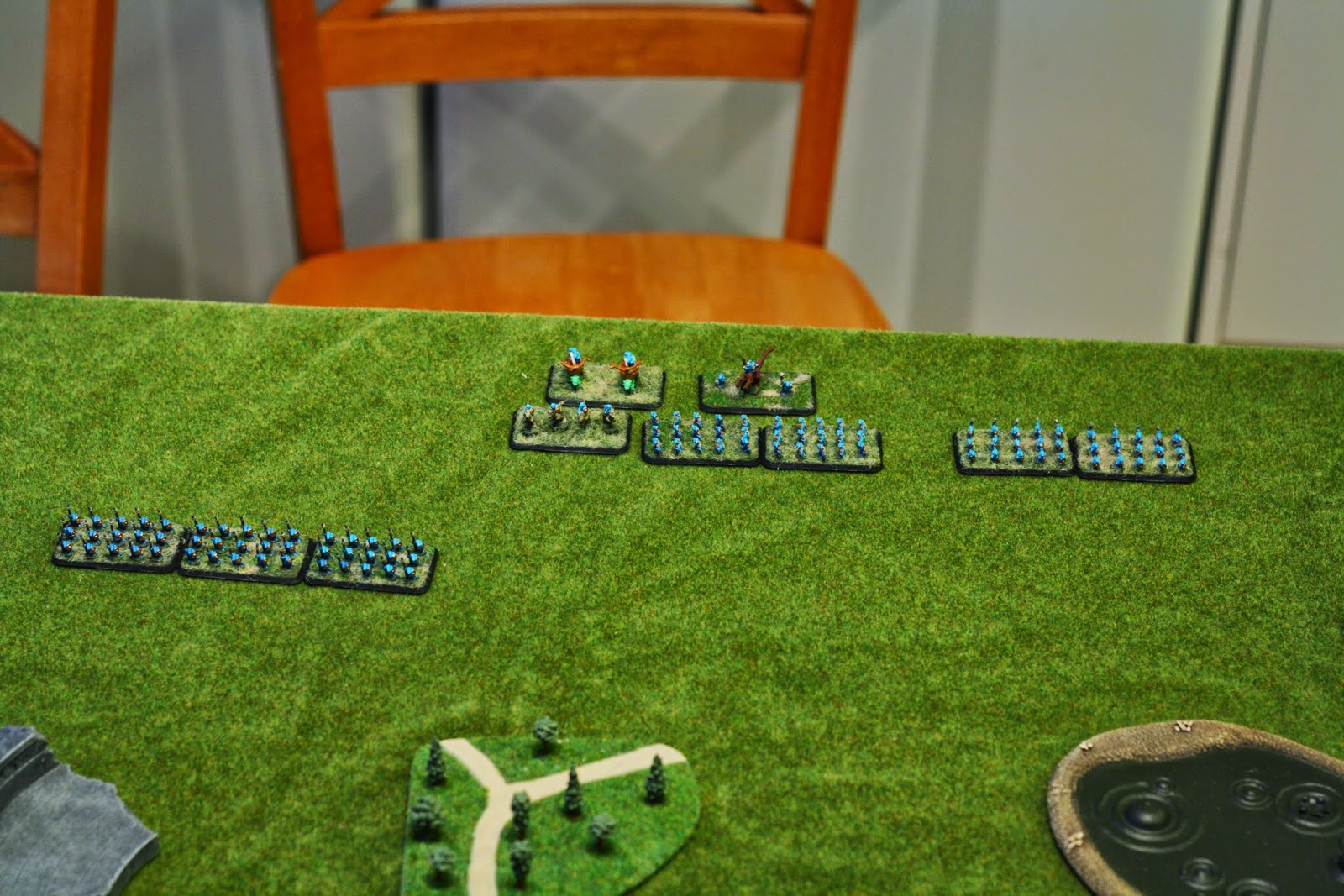 The lizardmen army, 3 stands of spearmen with Shields, 2 stands of longbowmen, 2 warrior stands with stone clubs, 1 of cavalry and 1 set of bolt throwers on dinos. Leading them is a captain mounted on a canivorous dinosaur (Counts as cavalry). 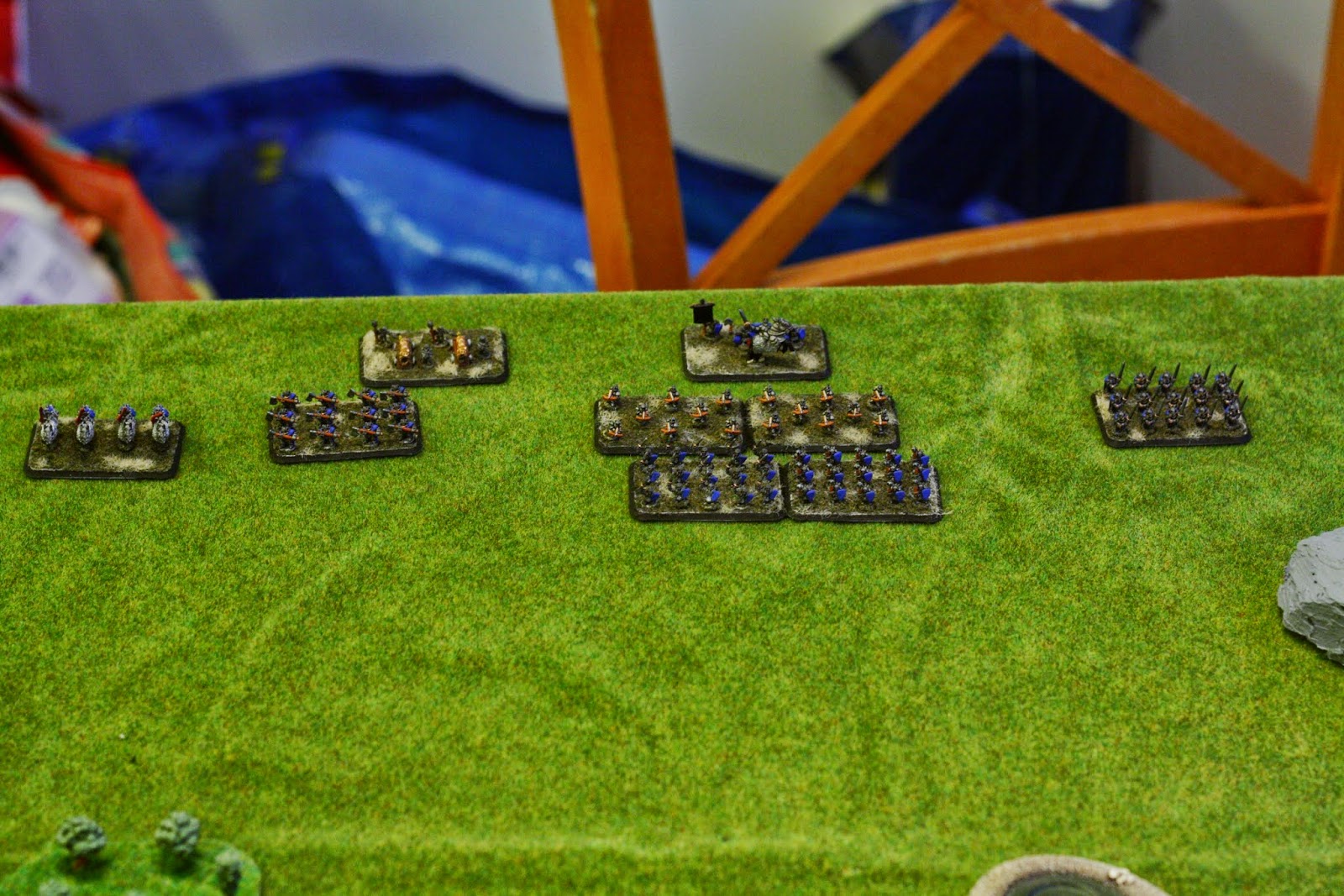 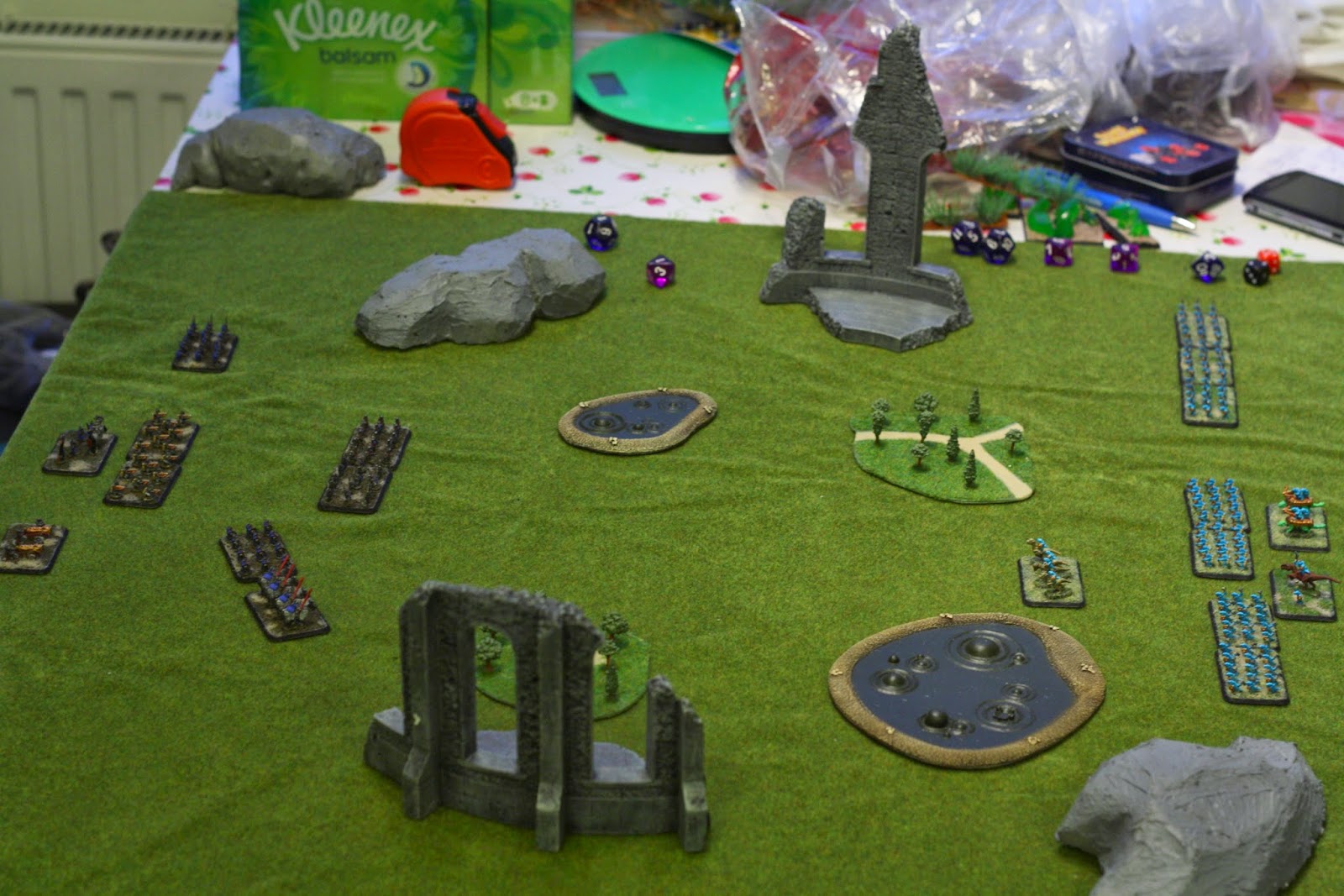 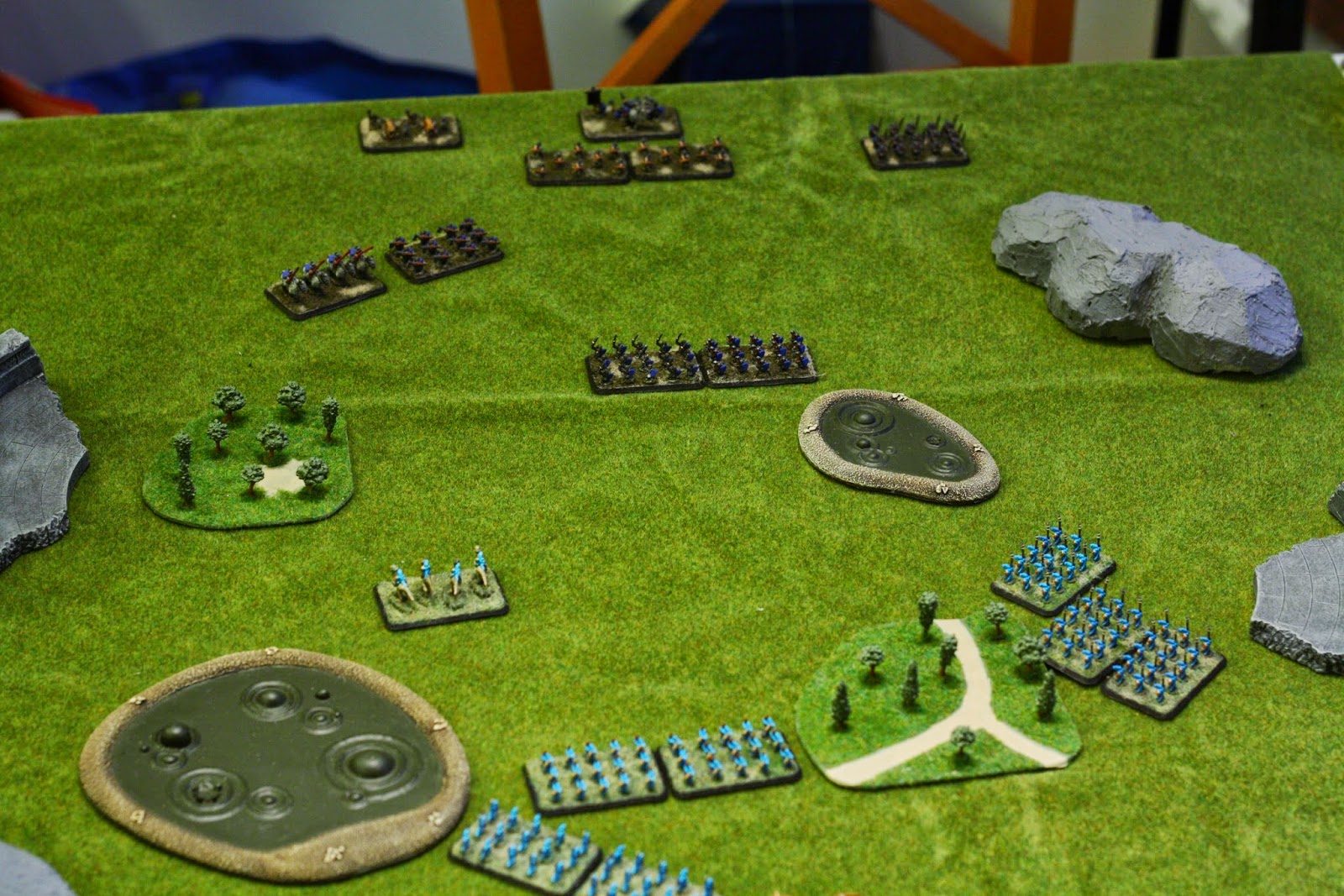 The first activations are used for movement, Mayhem has an interesting system where all stats are expressed in die type, for example "Movement d8","Combat d10" "Ballistic Armor Rating d10".

Whenever you activate a stand for moving for example, you can choose wether to go default, and move up to half the distance allowed by your Dice (4 in case of a d8 f.x.) or the riskier "danger roll", where you roll the dice and get to move up to your score instead.
This applies to combat as well, but unlike alot of other games, you want to roll as low as possible. And while rolling a 1 automaticly takes out the enemy stand, it can sometimes be better to play it safe if the skill-levels between troops are wide enough 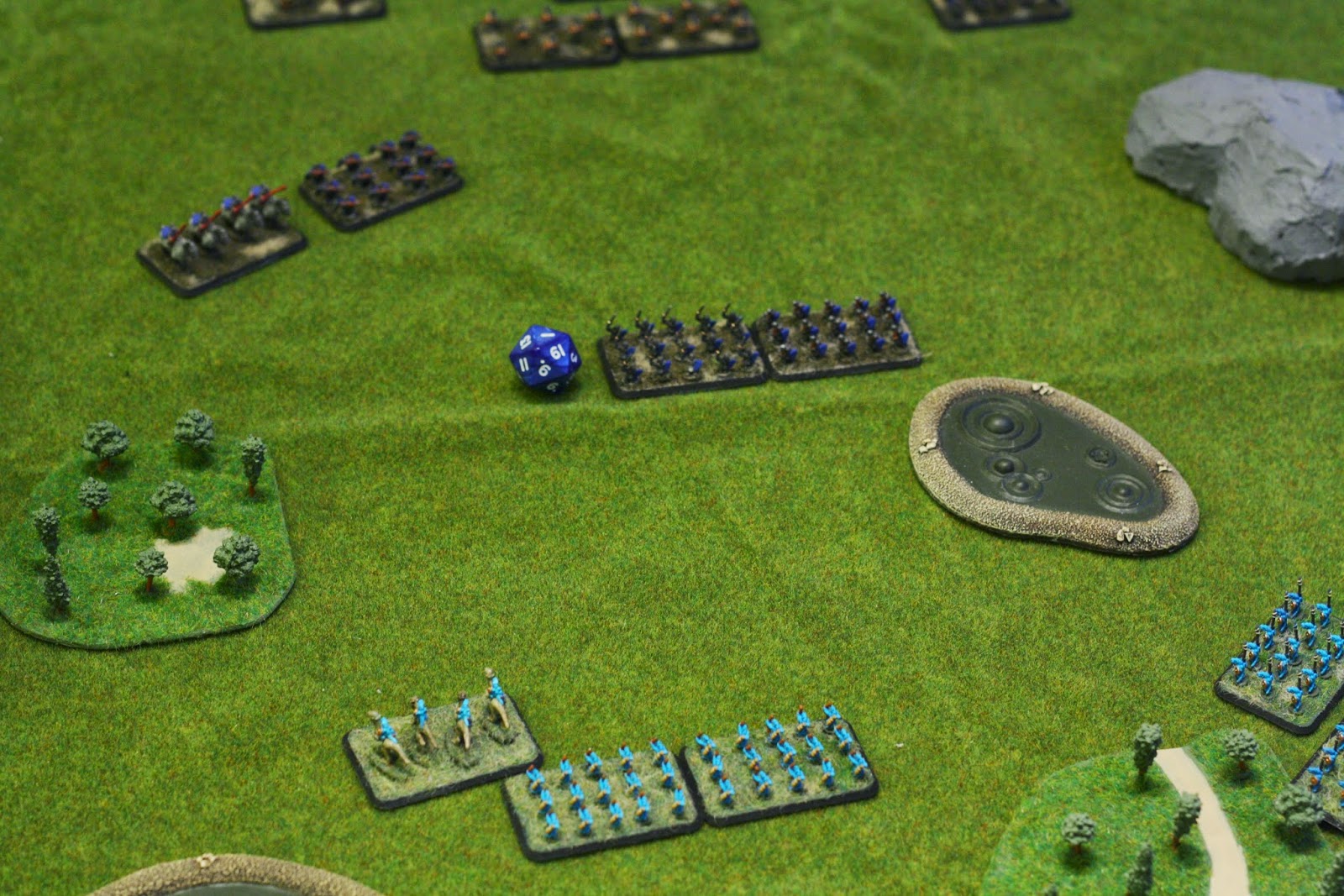 The first blood goes to the lizardmen archers, who roll a natural 1, destroying the swordsmen of the wastes in a shower of arrows. 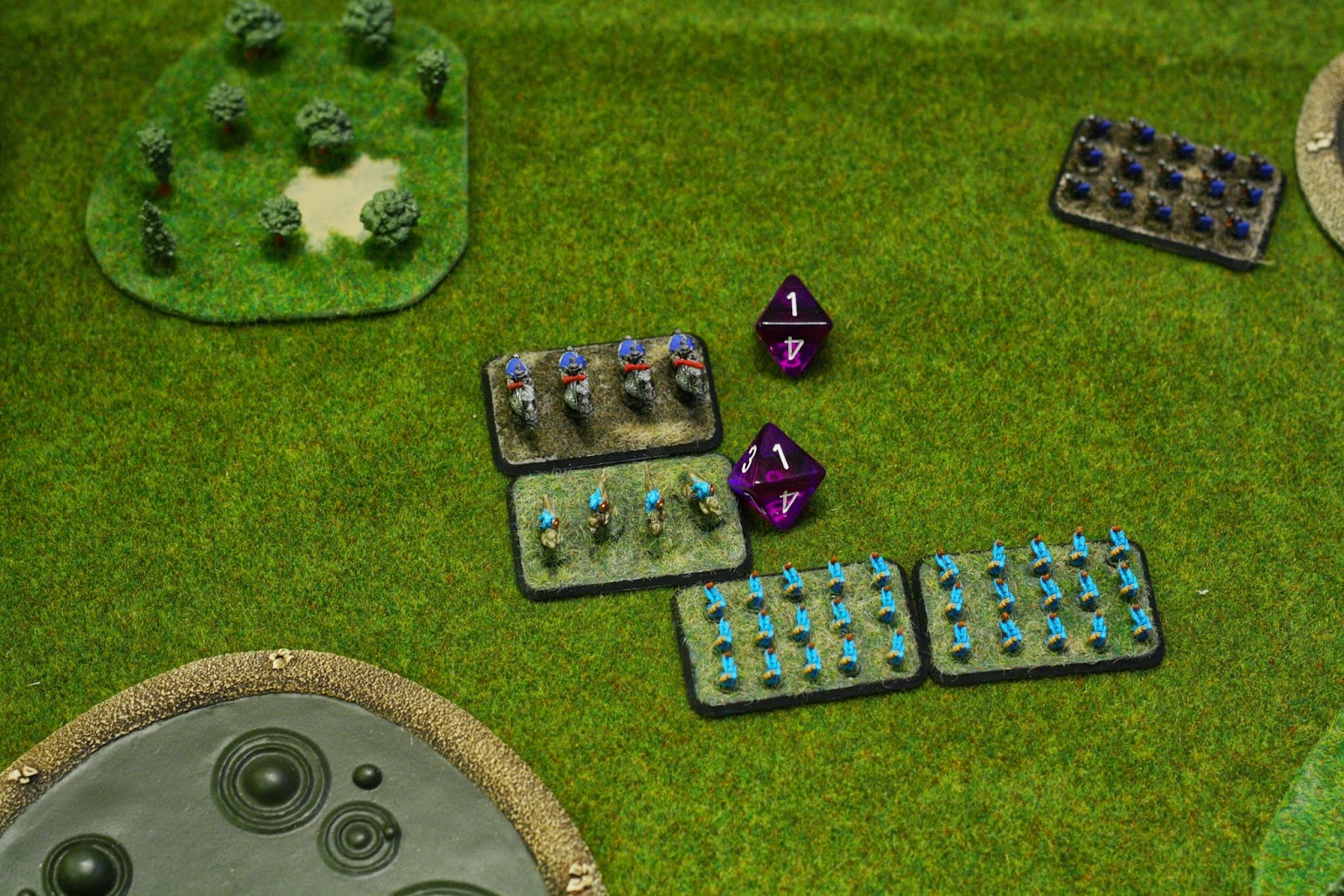 The nightmare cavalry charge the lizardmen cavalry, attempting to rout them Before they can decend upon their comrades. the initial shock drives the lizardmen back, but in the fighting that ensues, both units perish as they both roll 1s.
This is another quite interesting thing in mayhem, if both side choose to make a danger roll, it's entirely possible for them to take each other out. 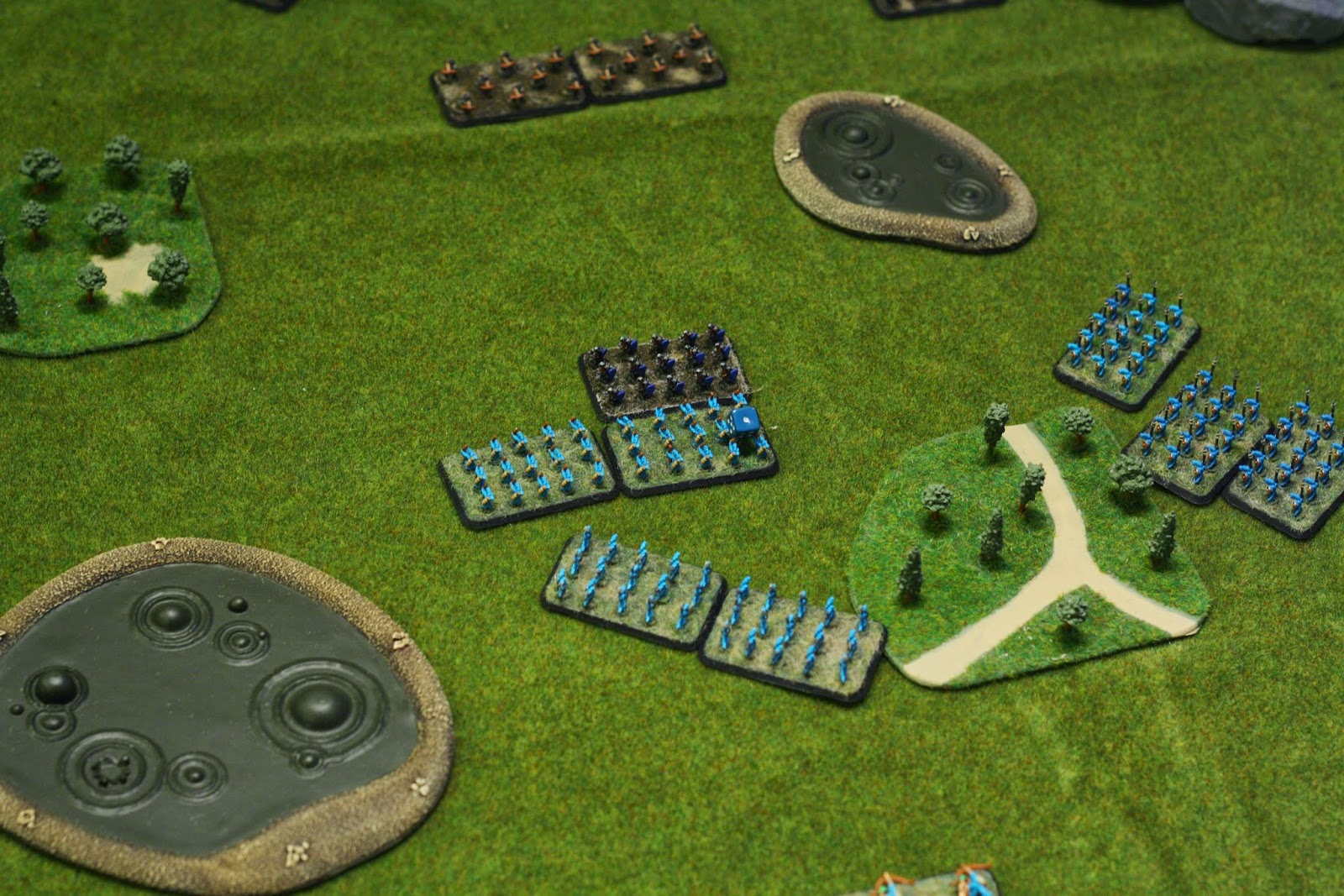 The remaining stand of warriors charge the line of lizardmen archers, taking them down quite easily, the archers close combat skills insufficient to ward of the blows. 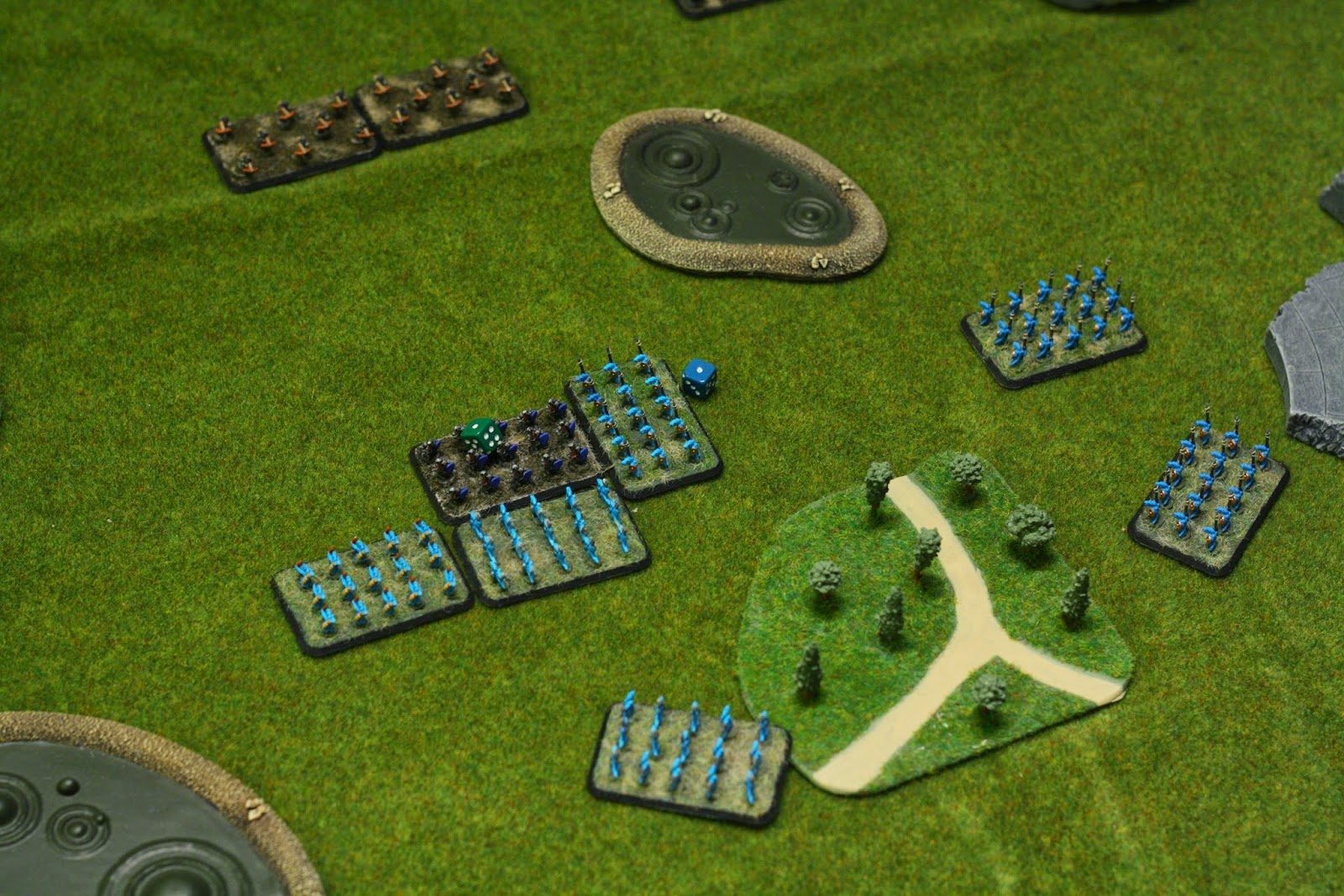 The 2 stands of lizardmen warriors battle the axe-wielding warriors, and a stand of spearmen join in on the flank. Units are disordered back and forth, but the lizardmen hold the advantage due to flanking.
Any normal unit that loses combat but not on a 1 gets disordered instead, meaning that they will be more expensive to activate until re-organized. Also, any disorganized unit that loses a combat, no matter the roll, will be eliminated. 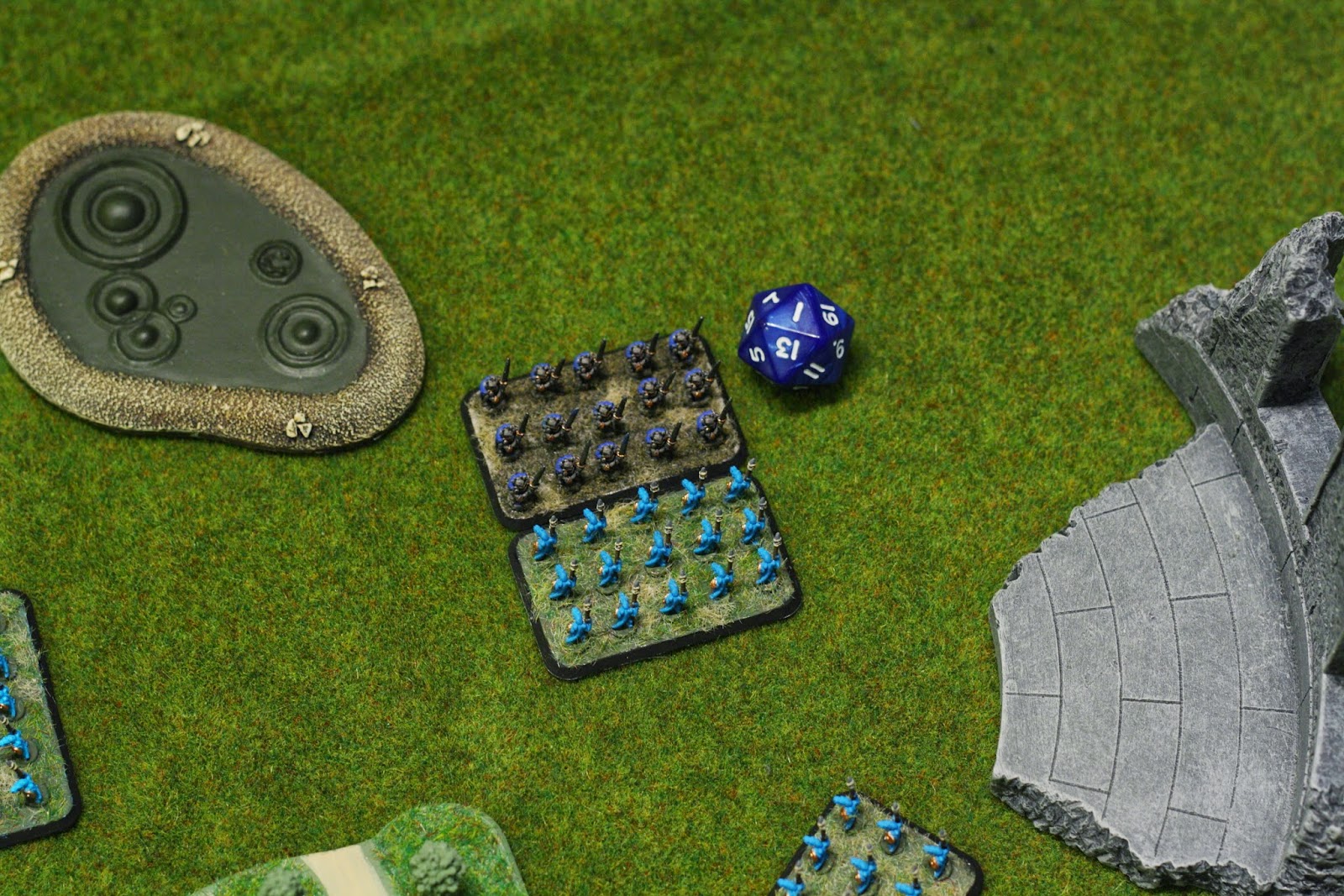 On the far left, a unit of heavy knights charge the spearmen in front of them, only to be gutted on a wall of spearheads.
These knights was the most powerful unit outside of the cavalry in their army, Rolling 2d4s in the combat against the lizardmen, who only had a d12 and a d20. Even so, the lucky roll of 1 means they are destroyed instantly, showing how even the mightiest warriors may fall. Statisticly speaking this won't be too common, but it makes for cinematic and unexpected moments! 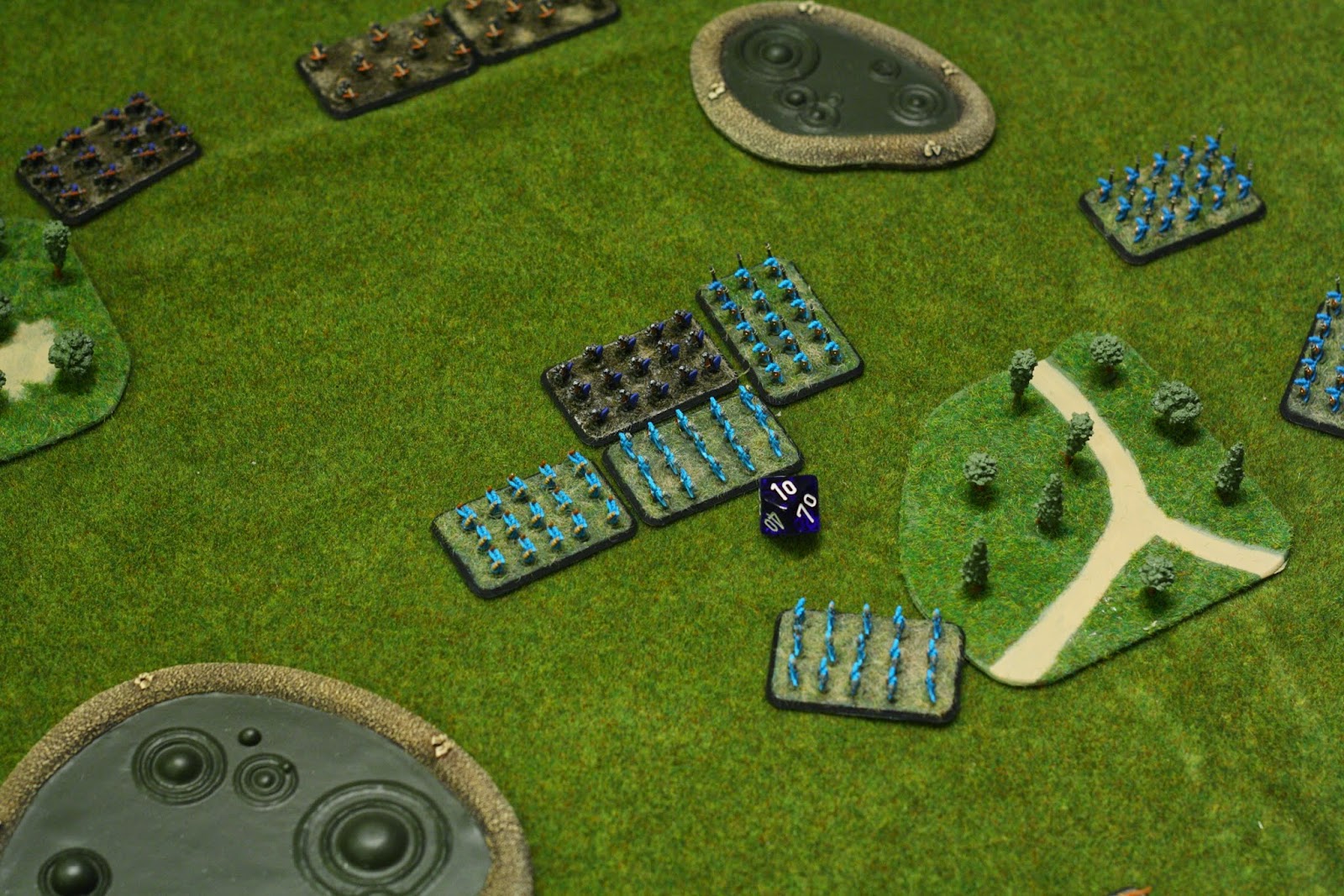 Finally overwhelmed, the last warrior unit is taken out, the superior numbers of the lizardmen was too much. 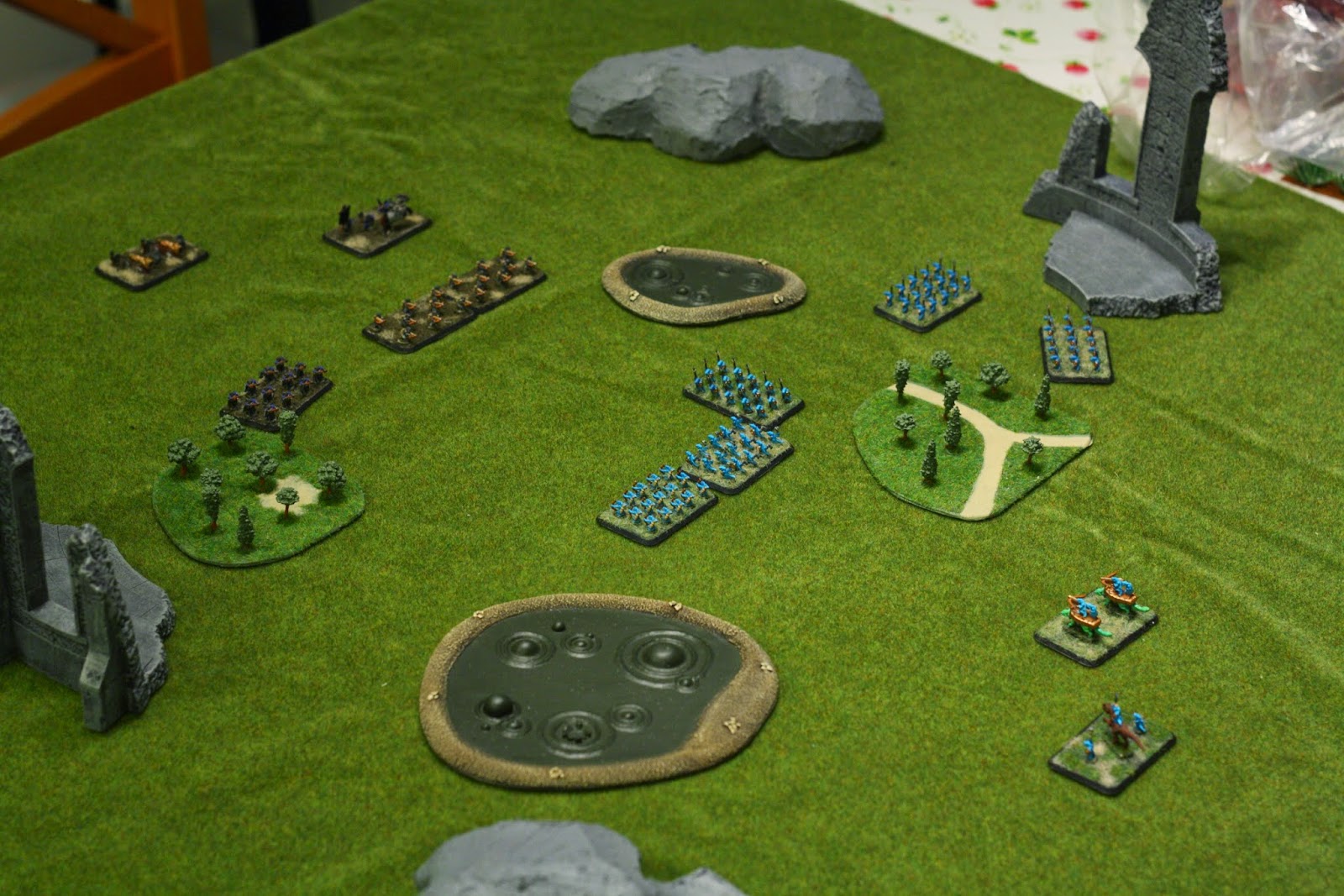 Having lost 50% of thier forces, the warriors of the Ashen wastes are forced to take a break test.
They roll their leadership dice (in their case, a d10) and on a roll of 1, they would quit the field. if they make it, they have to make a new check next turn, with 2 dice this time, 3 dice the 3rd check etc. until at least one comes up a natural 1.
So of course they managed it on the first go.

Victory to the lizardmen!

I like how to system works, but I quickly learned that I should have invested in more banners for both sides, as these lets you roll more command dice and keep the best. There was a few times when both sides managed to roll only 2s or 3s, making anything but basic manouvers all but impossible. But you learn as long as you live!

For the next game, we will try Mighty armies, to see how they stack up rules-wise. Hopefully I'll have a new army to showcase right about the same time as well!

Hope you've liked it!
Posted by Alexander Wasberg at 00:35