Among towers of steel and concrete; A No Stars In Sight AAR

With the beta of No Stars In Sight in full swing, I of course wanted to try out some of the new toys this game would offer.

I hadn't played a urban "city-fight" style game in a while, so when the opportunity presented it self..


For this test game I started out quite basic, the Tyrians (in green) had one squad of regulars (5+leader) with integrated platoon commander replacing the squad leader. they were equipped with heavy combat armor and had both a SAW and a coil rifle for support. The Tyrian militia was slightly under-strenght with only 5 troopers and a squad leader, instead of the regular 8 man unit. They also carried a SAW, but only light body armor.

Their opponents, The USS had two squads as well. USS marines in light armor with SAW support, 6 man strong, and USS Specialists with heavy combat armor and a SAW. the specialists were 1 man short, bringing 5 soldiers to the fight.

Both the USS marines and the Tyrian militia also carried observation and hunter-killer drones, but for reasons soon revealed, they never came into play. 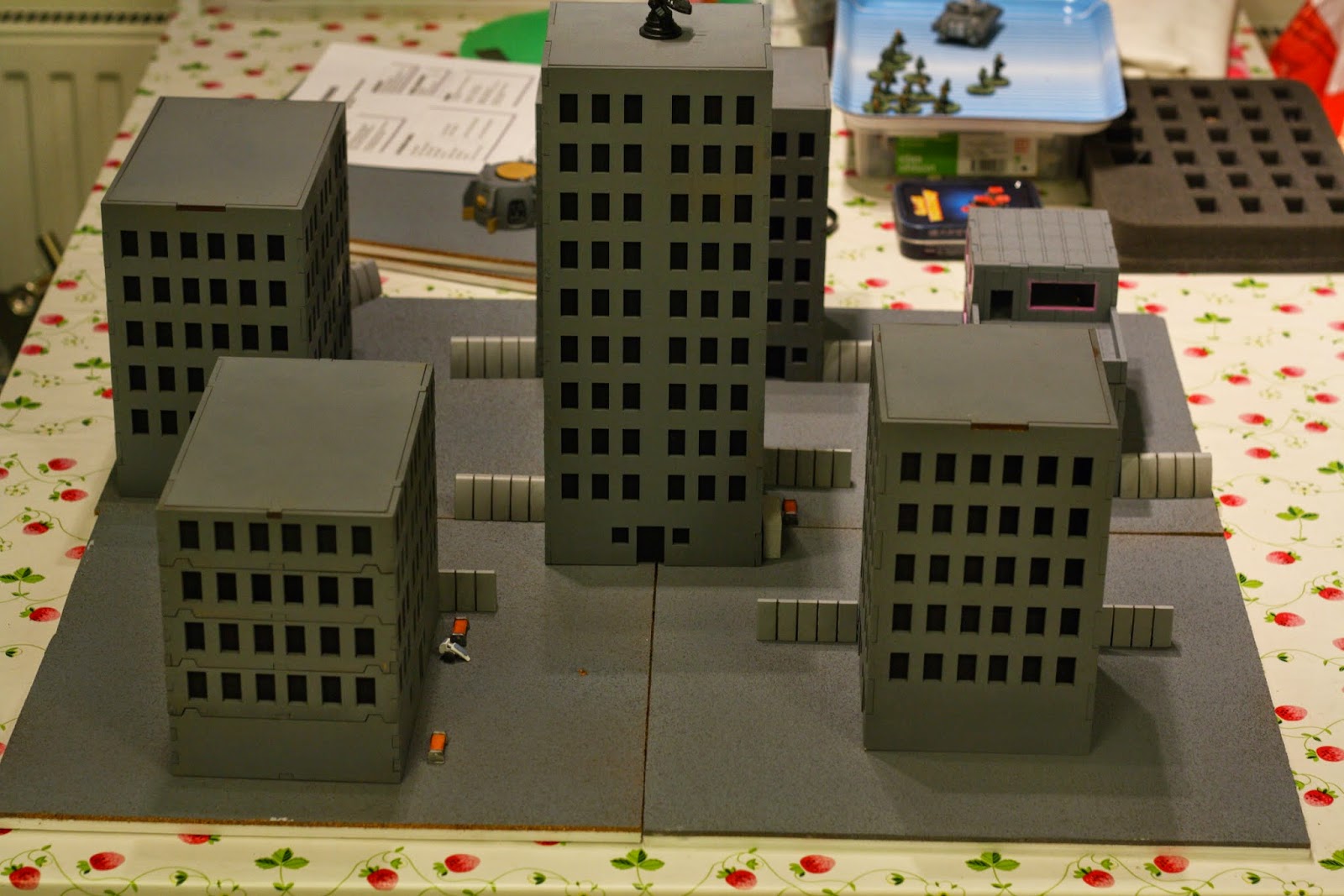 The battlefield. A city block on the outskirts of New Liberia, Luna. 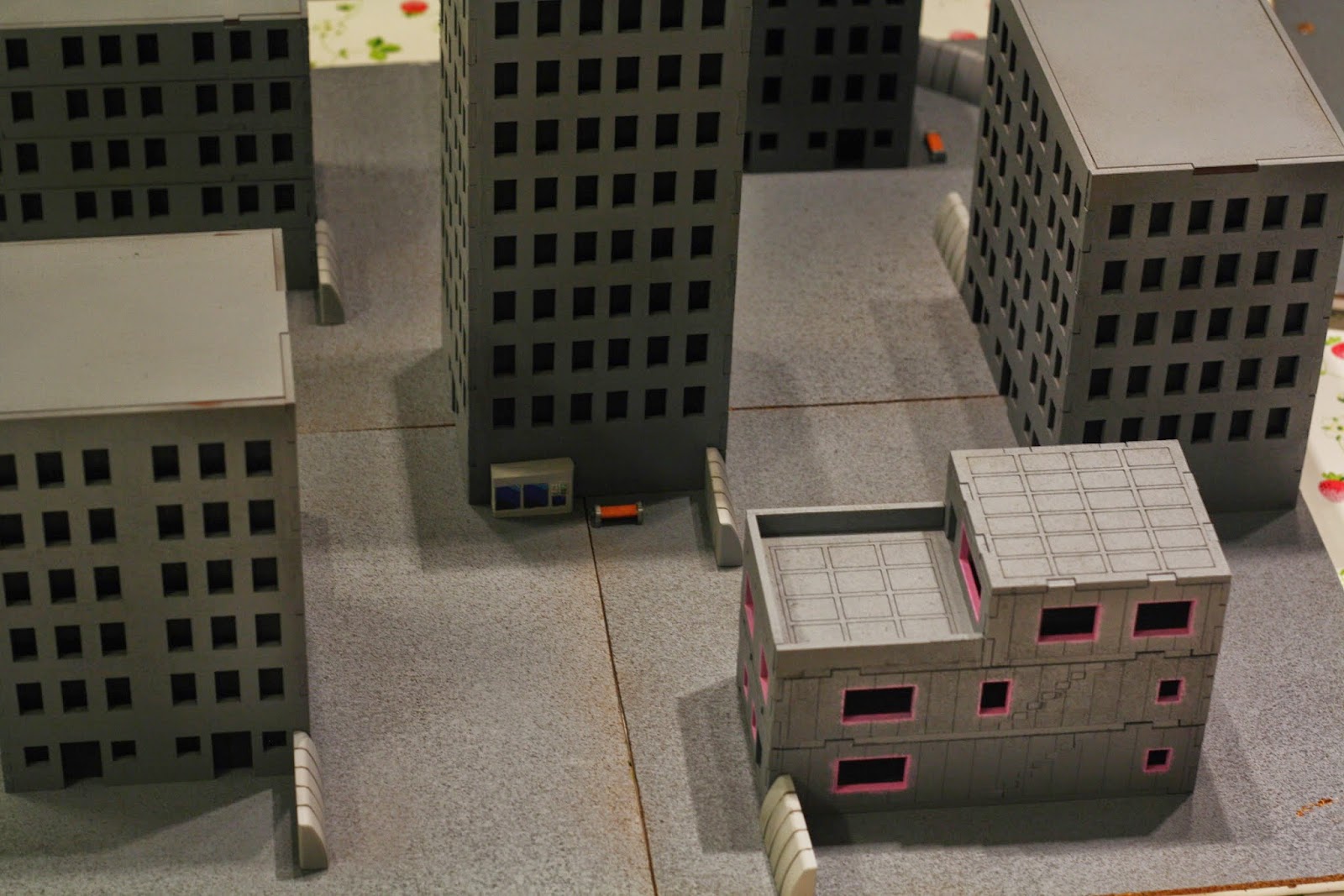 Vending machine, might this be the real reason for all the fighting? 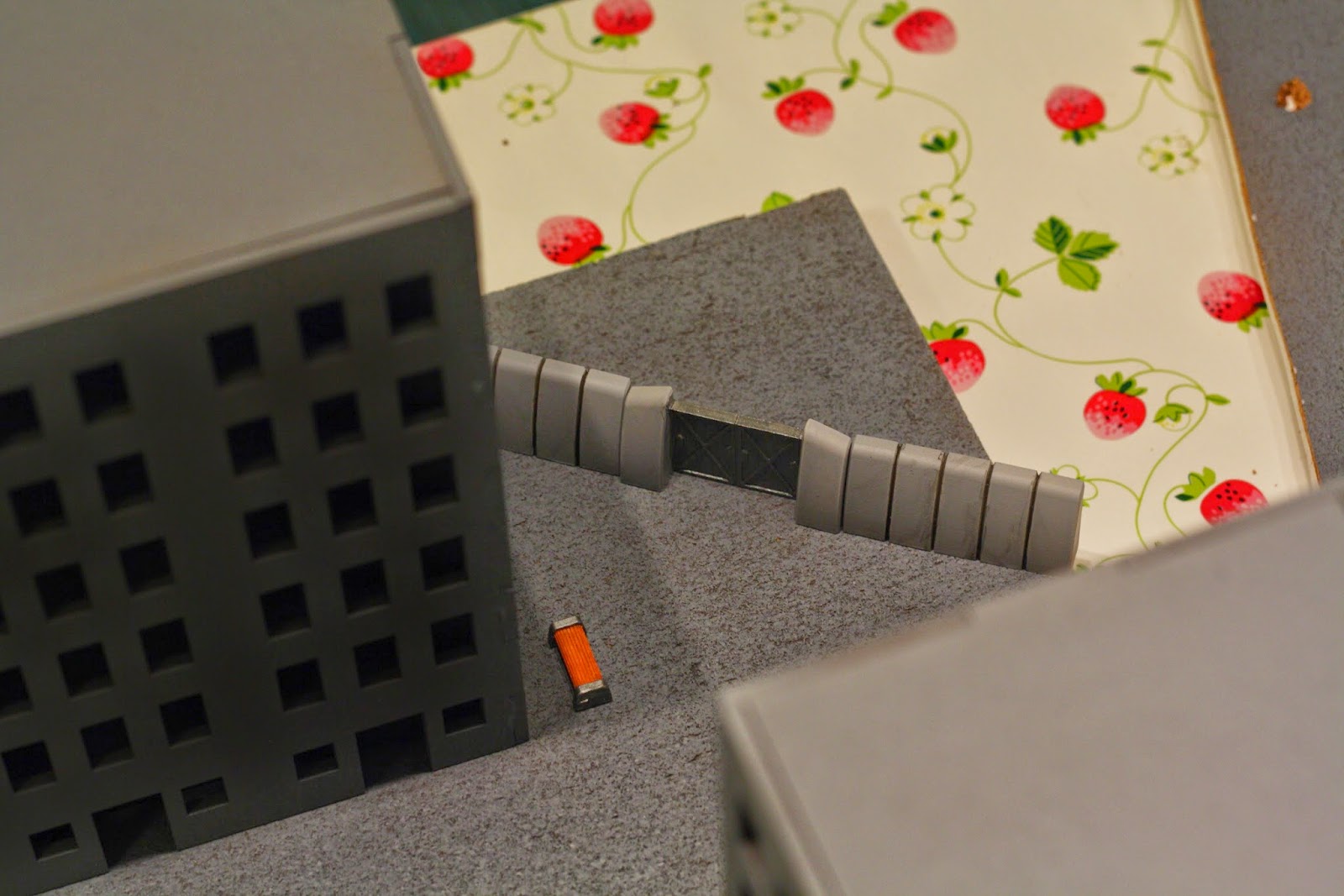 This gate was the objective for the Tyrian forces, at least one squad needs to reach it.
The USS objective was simple, stop them, and if not viable, delay them. 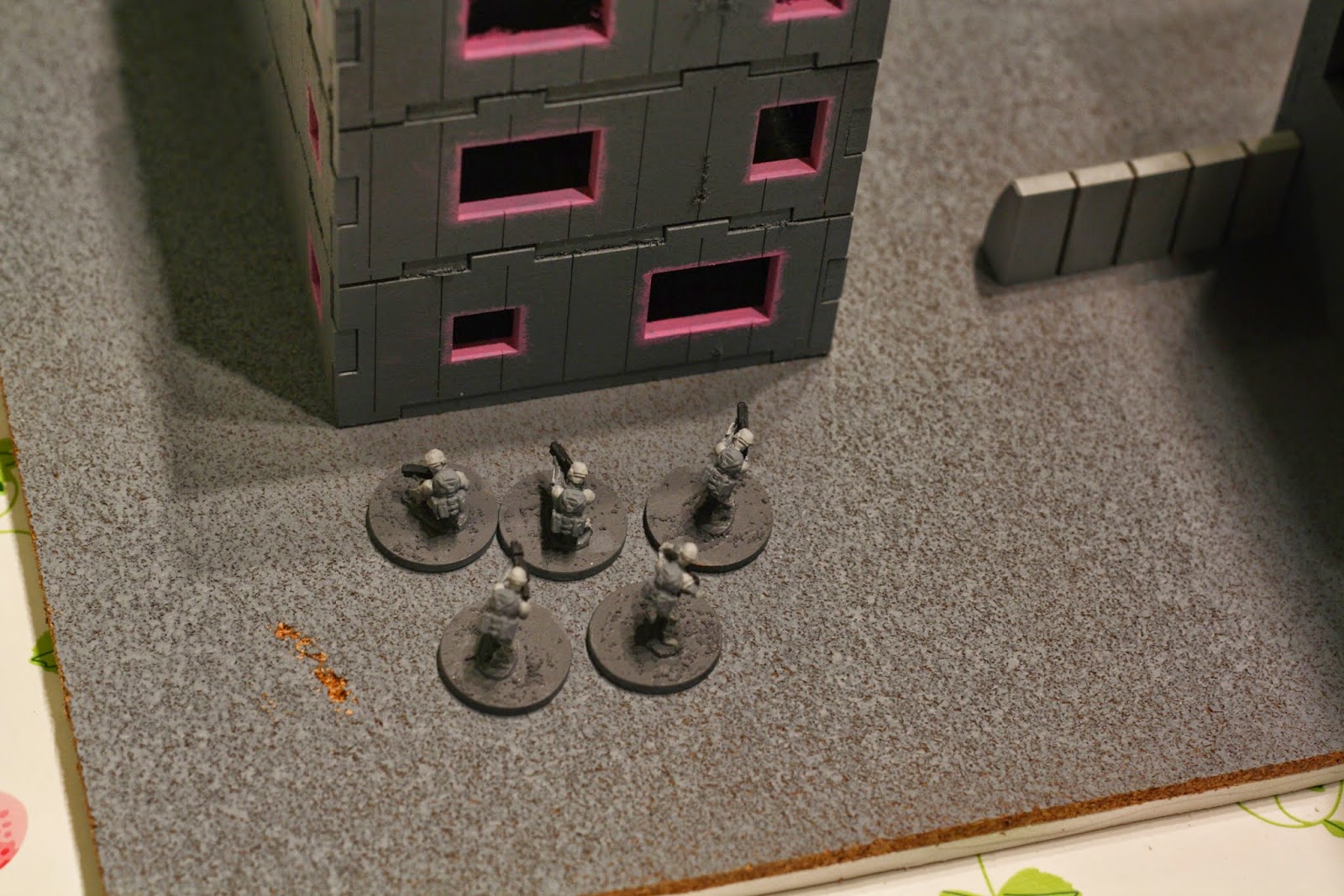 USS specialists on their left flank. 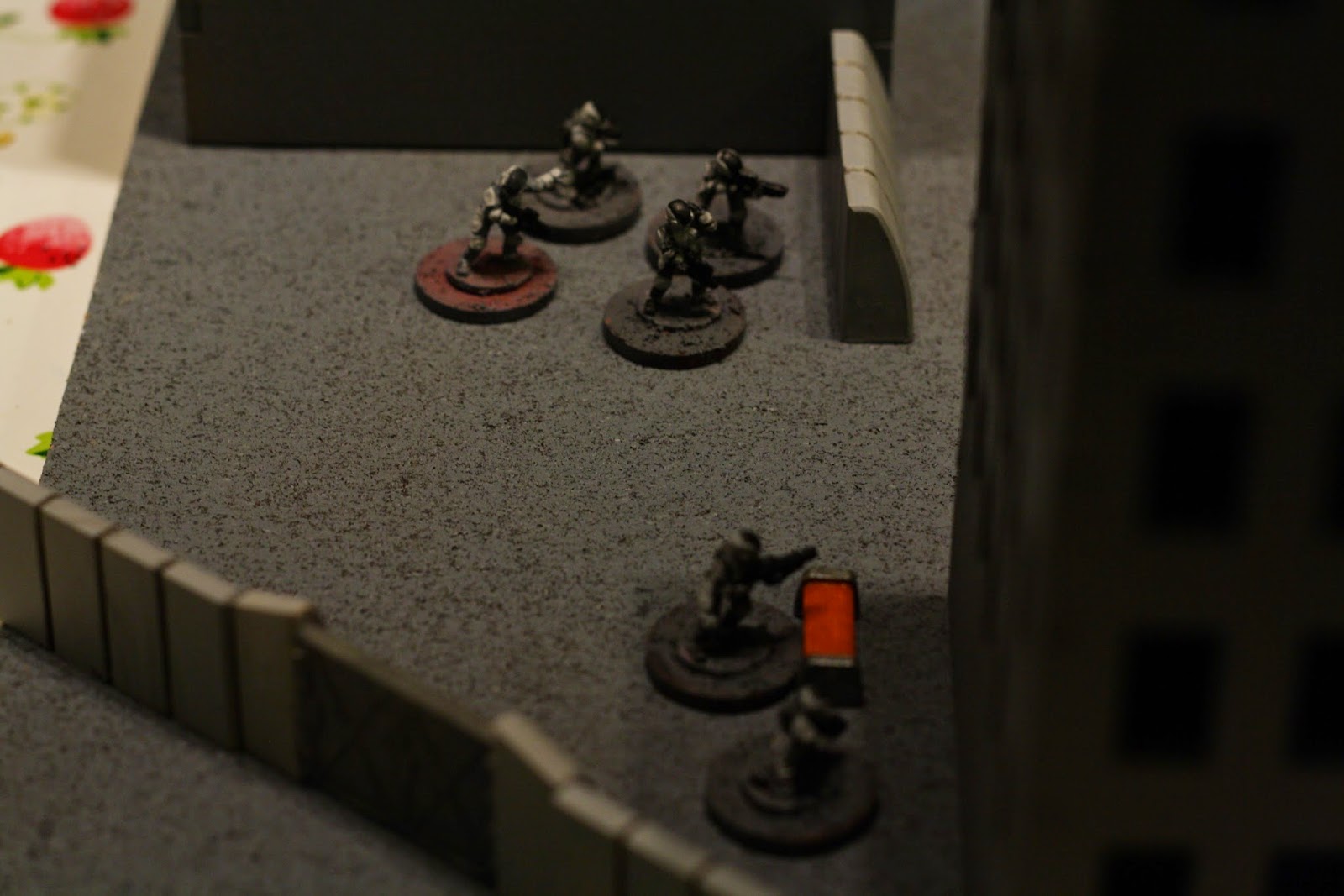 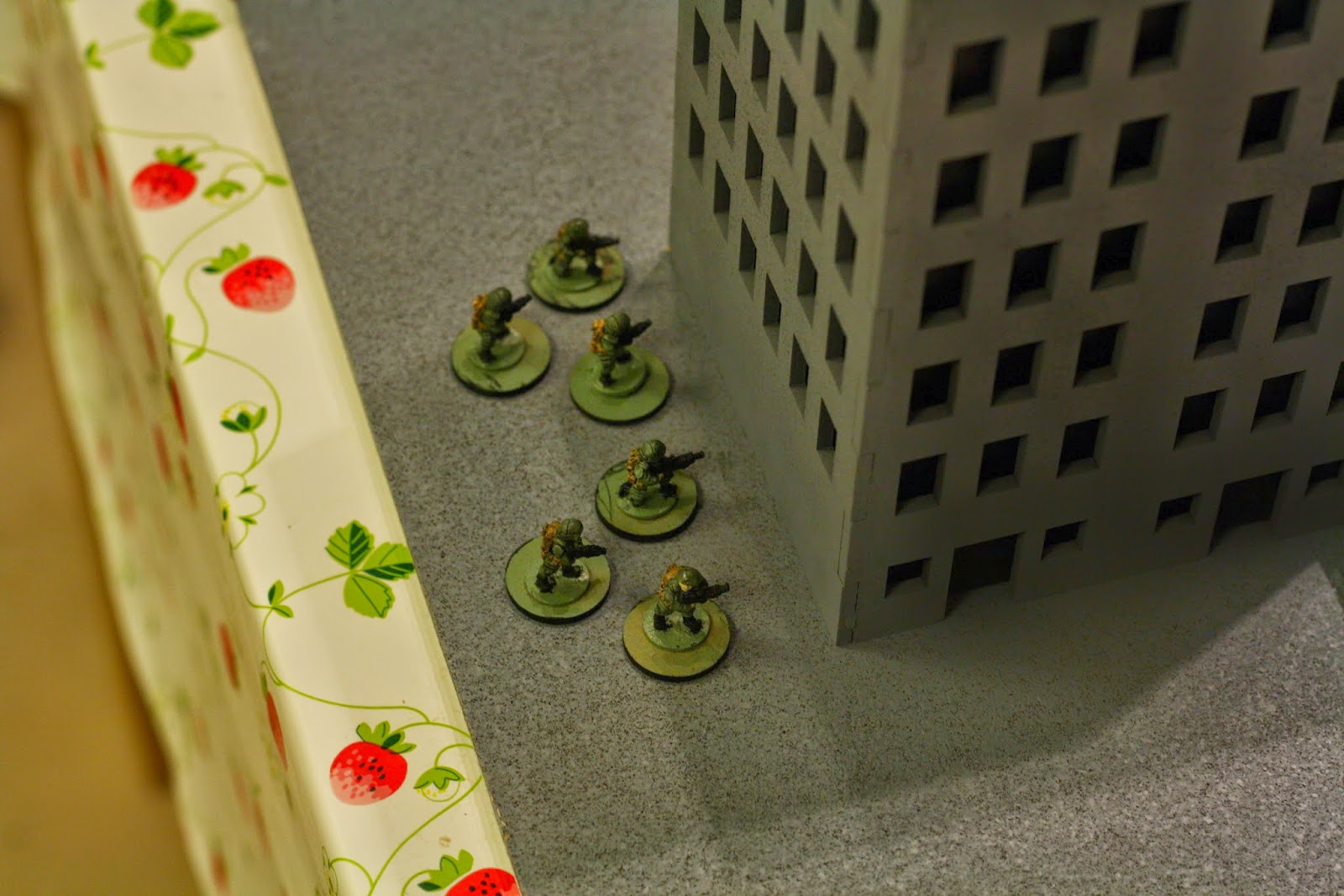 Tyrian militia, right across from the specialists. 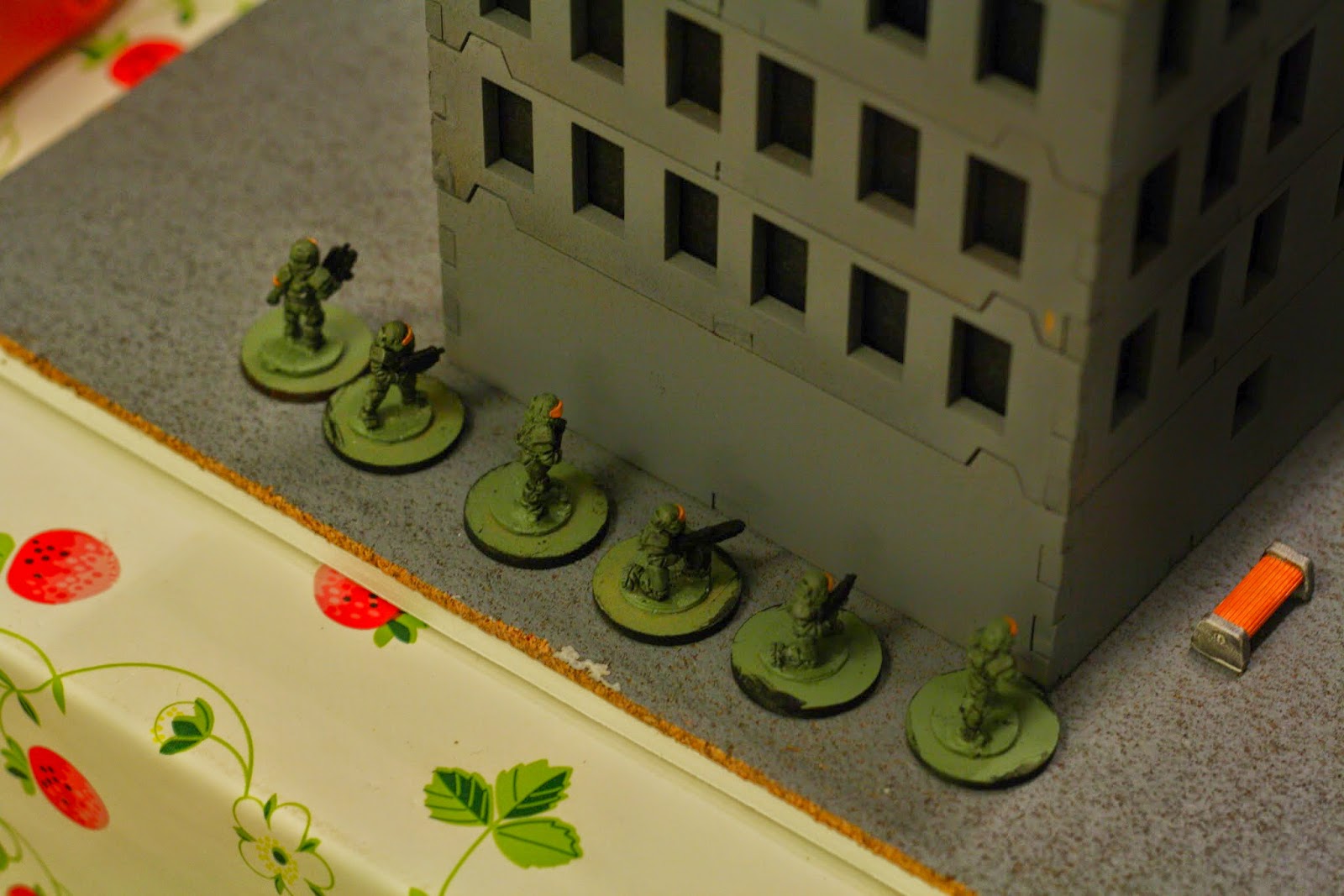 And the regulars, right opposite the marines, and the gate, their objective. 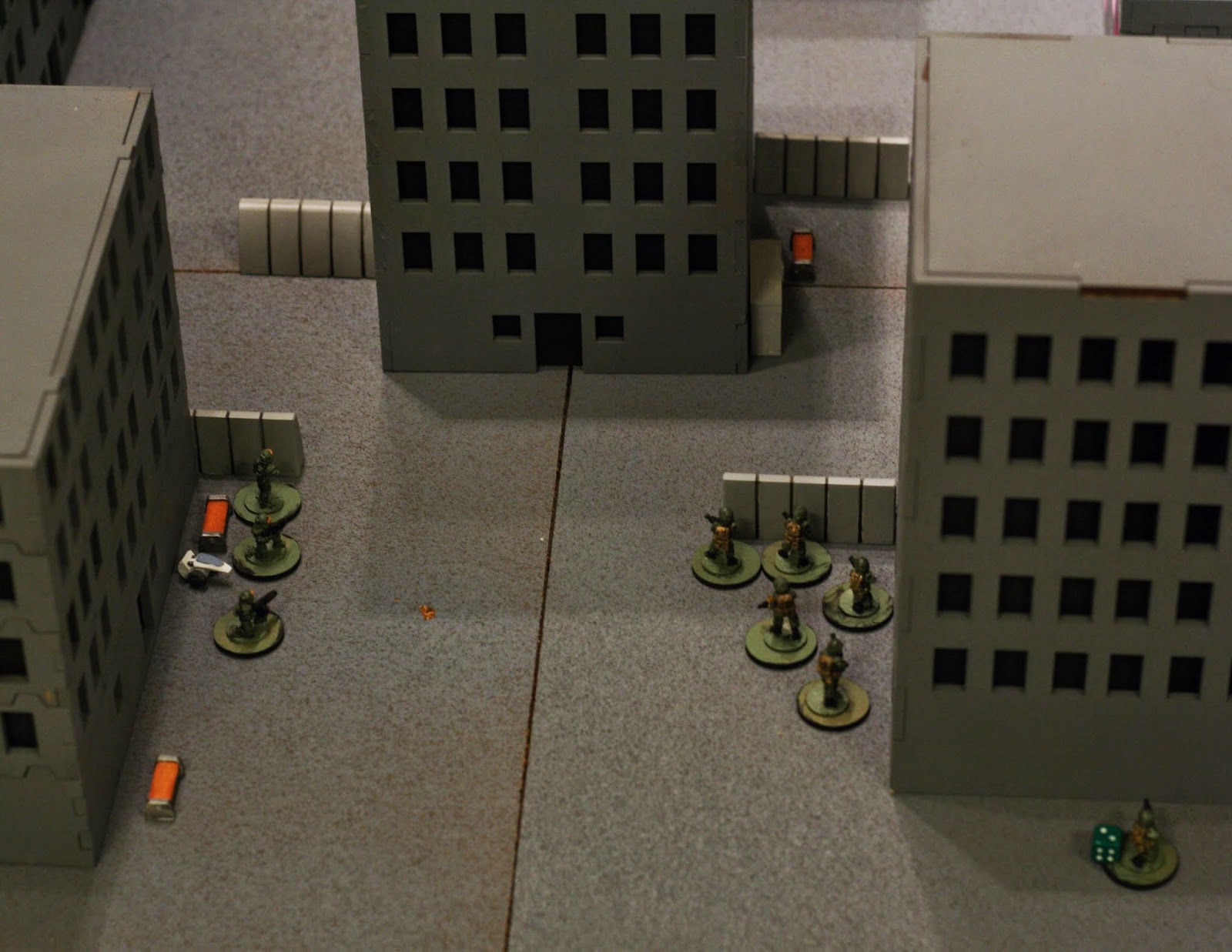 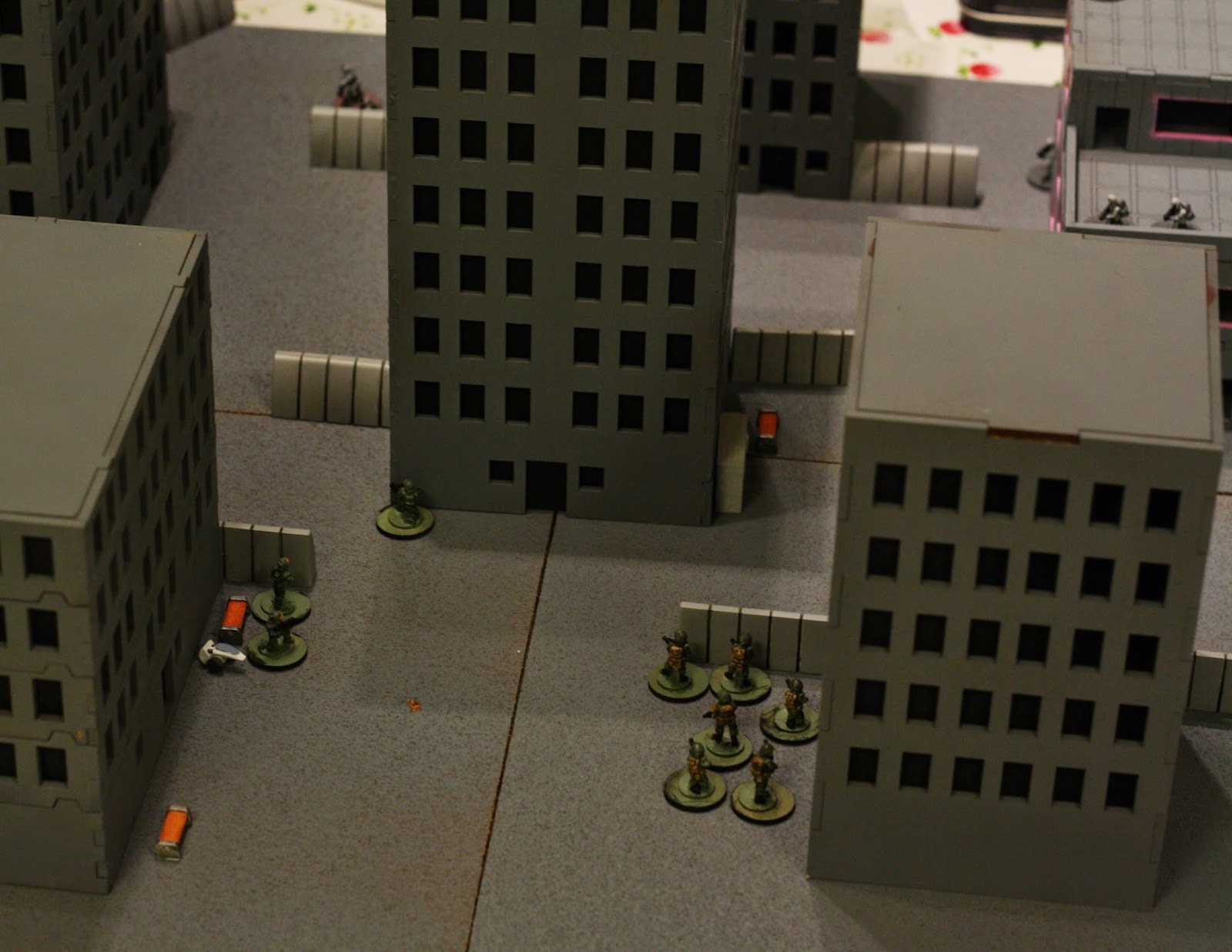 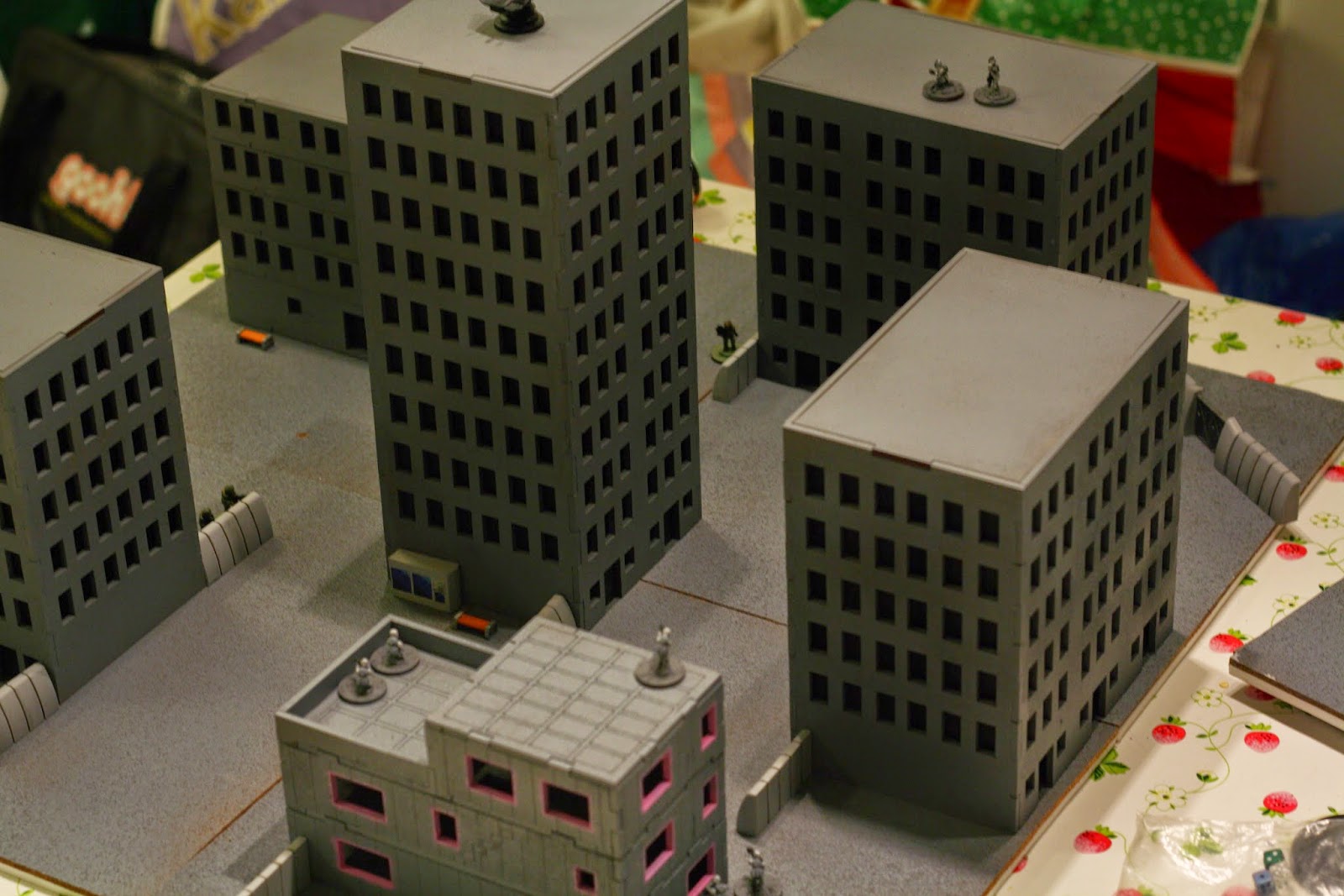 Most of the first phase saw both forces manuvering to get into firing positions. With several buildings for solid cover, both sides got to work. 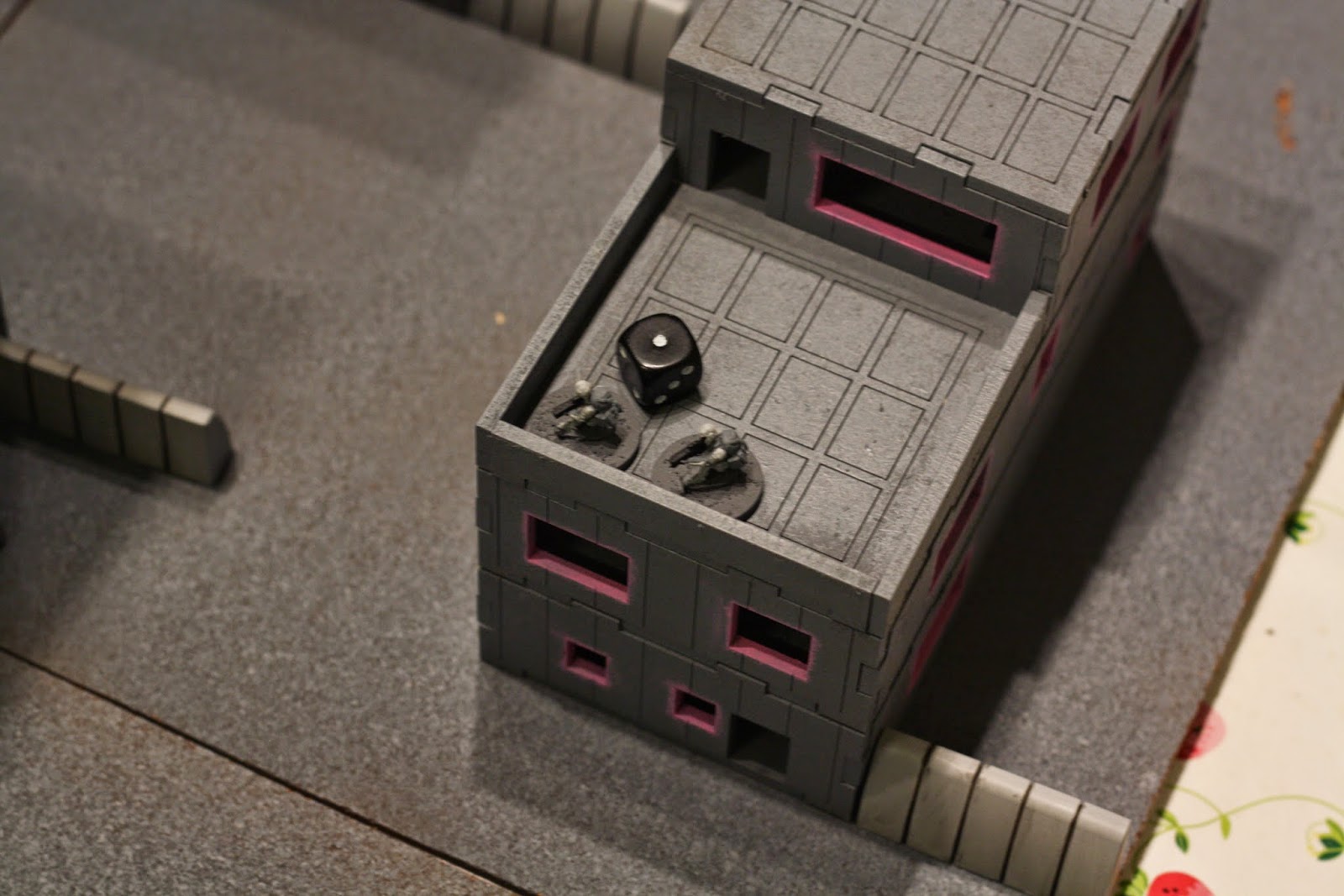 The Tyrian regulars took the first shot across the Alley, pinning a specialist inside the building on the far right. 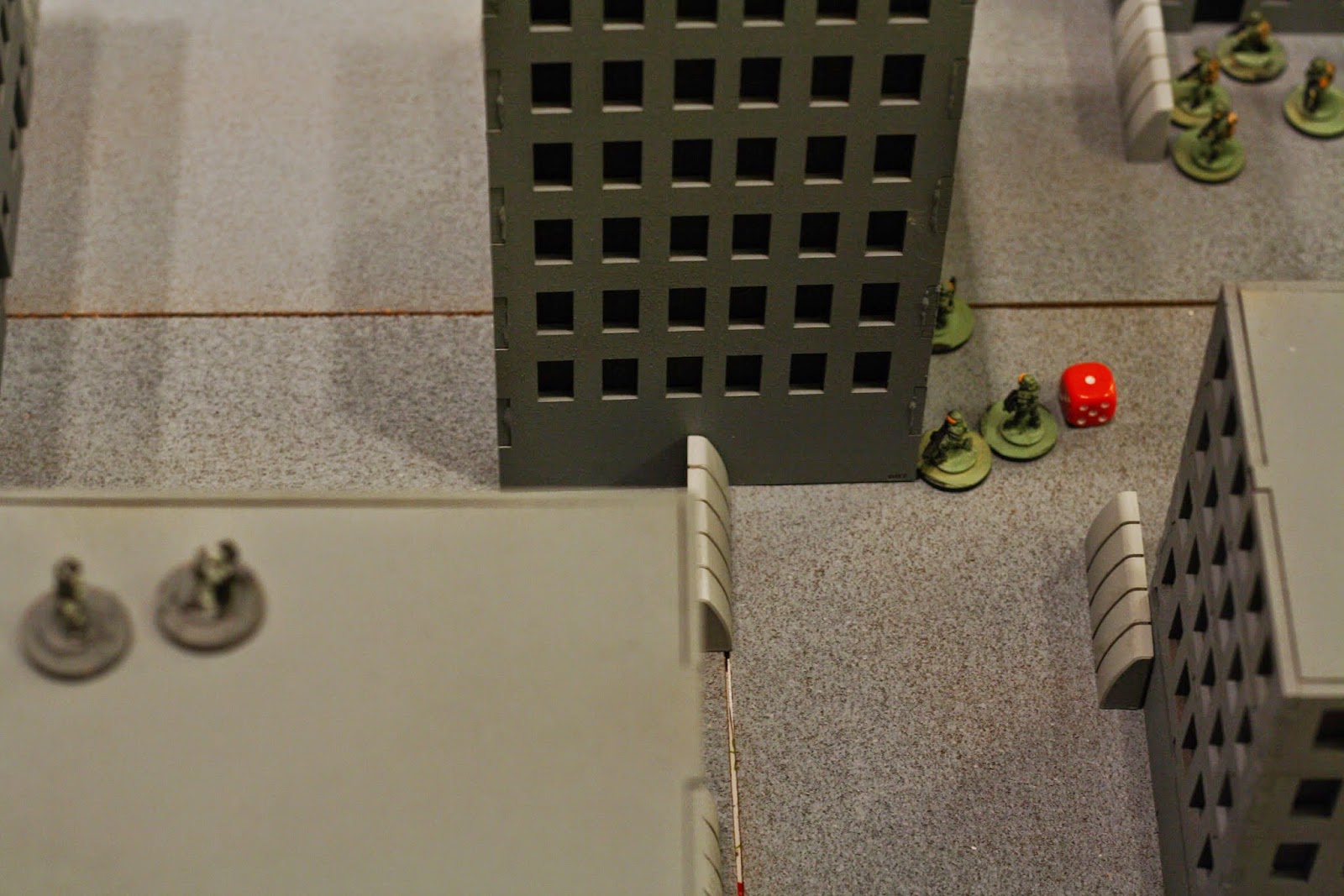 When trying to cross the open space between buildings, all but one regular makes it across. The poor soul left in the street takes a shot straight through his armor, the advanced suit doing little to stop the bullets. He is wounded, but not dead. USS claims the first casualty! 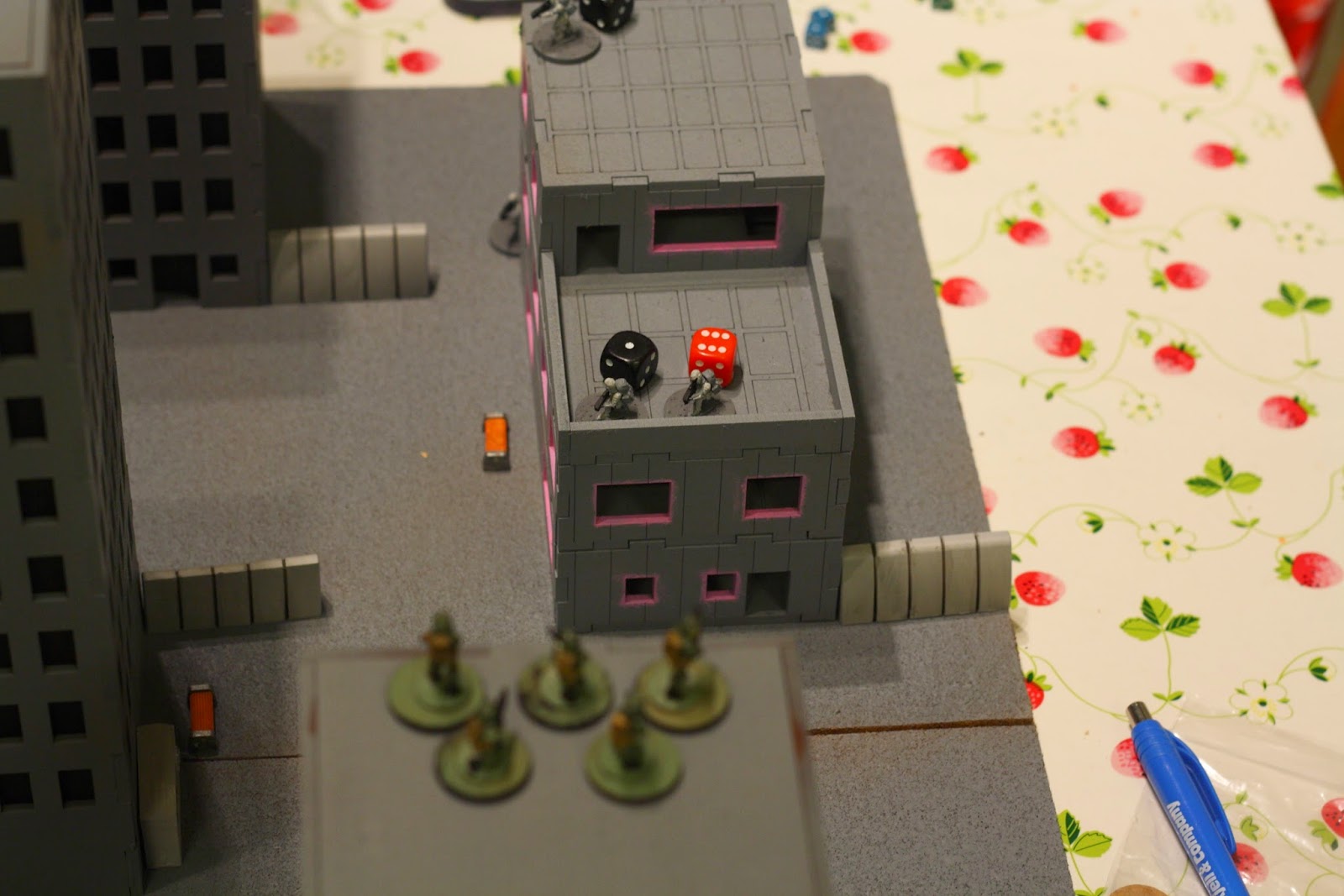 Moving into the building on their right the militia men proceed to pour fire onto the specialists entrenched right across from them.

A lucky shot goes through the visor of one specialist, he is obviously dead, and 2 more or their number is pinned down. Not backing down, they keep holding their position. 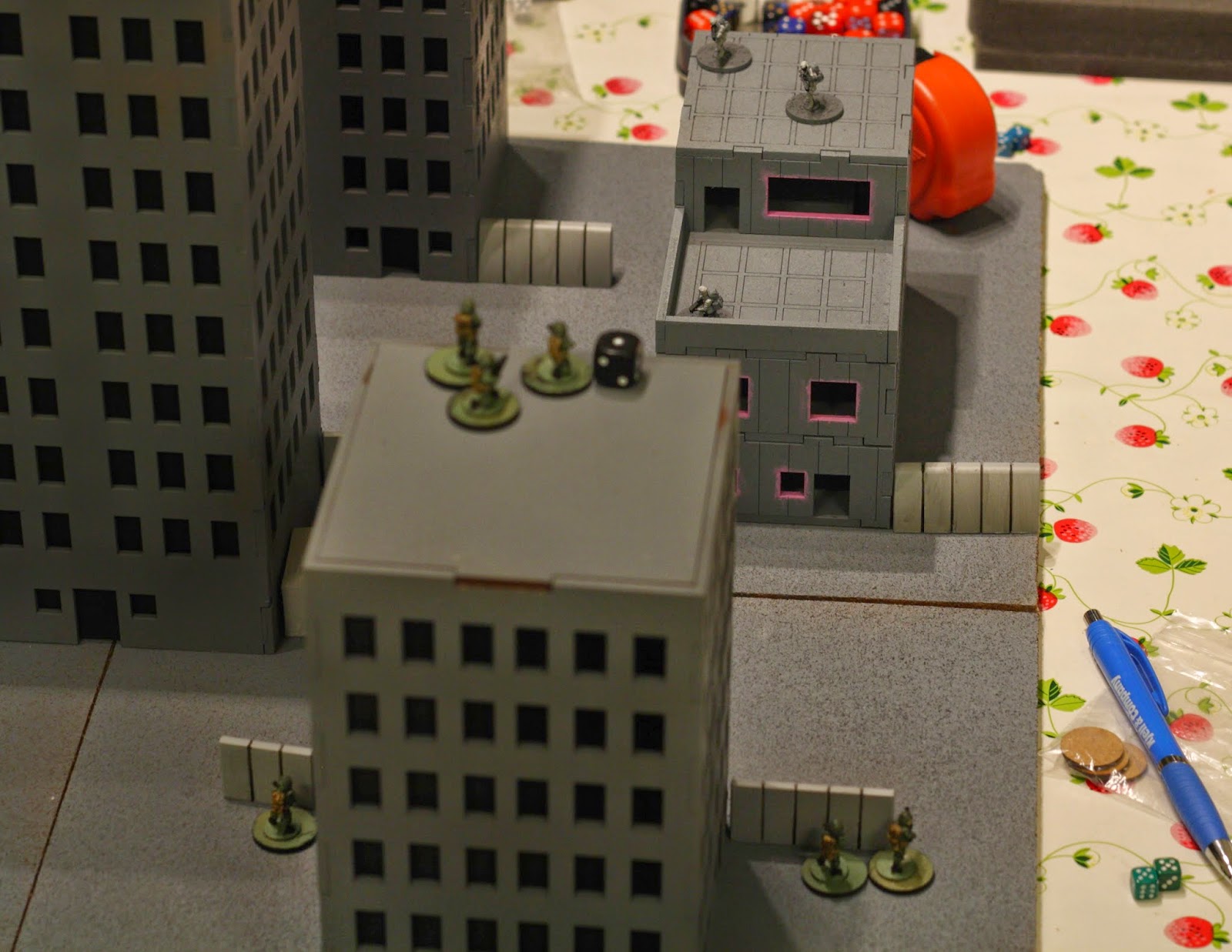 It doesn't take long for the specialists to unpin themselves, while their remaining number pin down one of the militiamen. 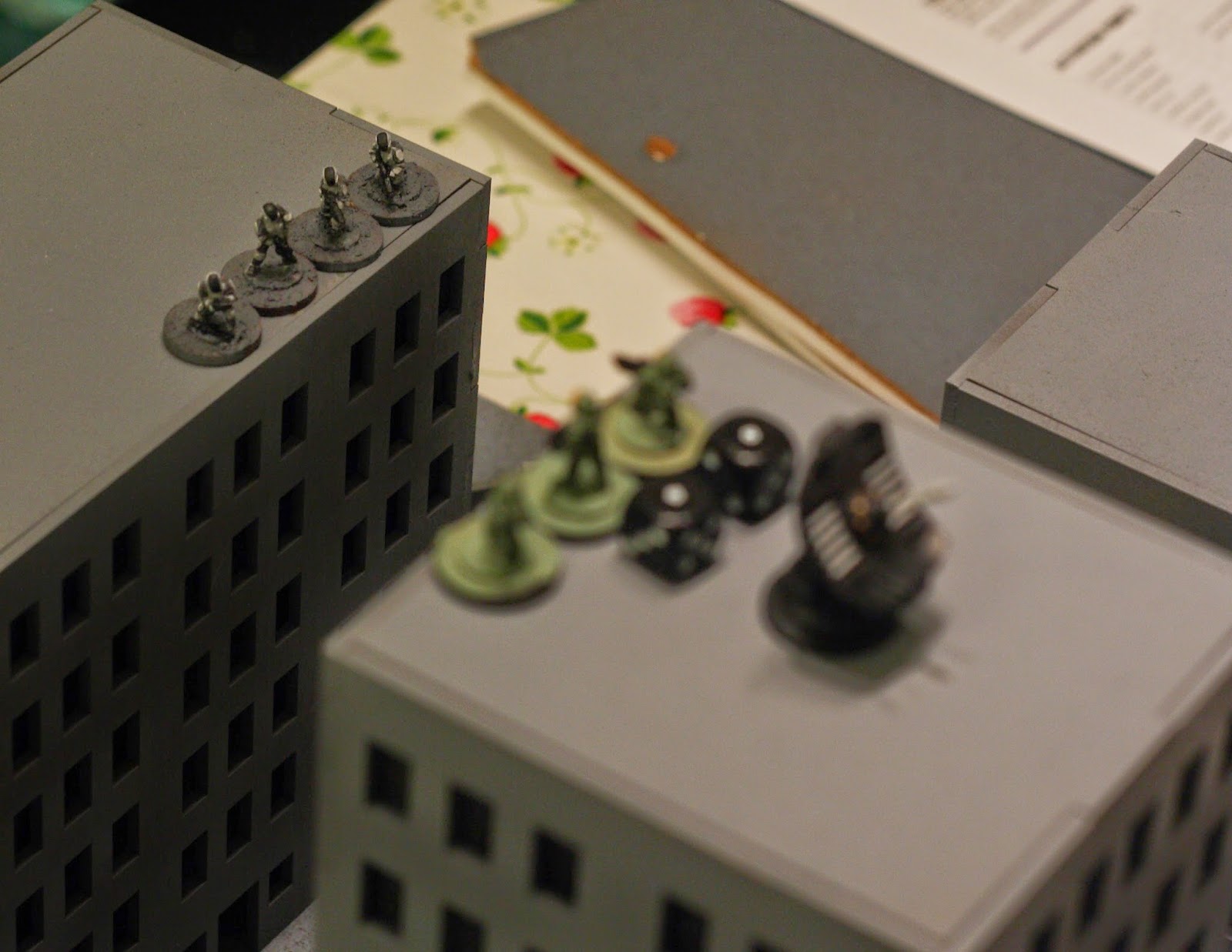 Over on the left side things are not looking good for the Tyrian regulars.
The wounded regular from earlier is brought back into the fight, but a good activation from the marines leaves 2 pinned troops inside the building, while the 3 at street-level can't draw a bead on the marines.

In an desperate gamble, the platoon commander decides to try and storm the building, taking on the marines in close quarters. 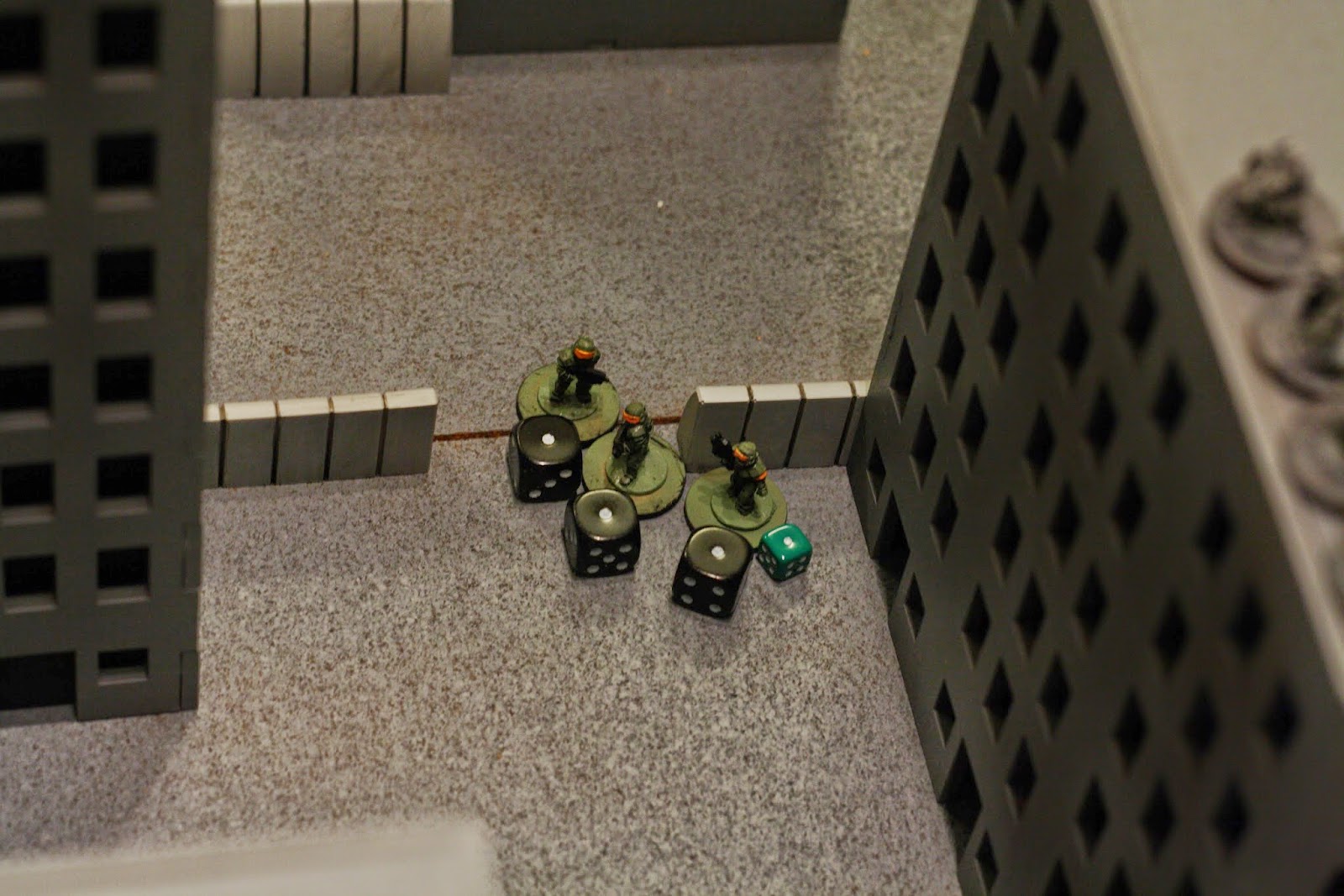 Rolling nothing but 1s and 2s for their rush move,
all 3, including the commander, is pinned down in the street. Luckily for the regulars, none
of the marines manage to take any of them down. 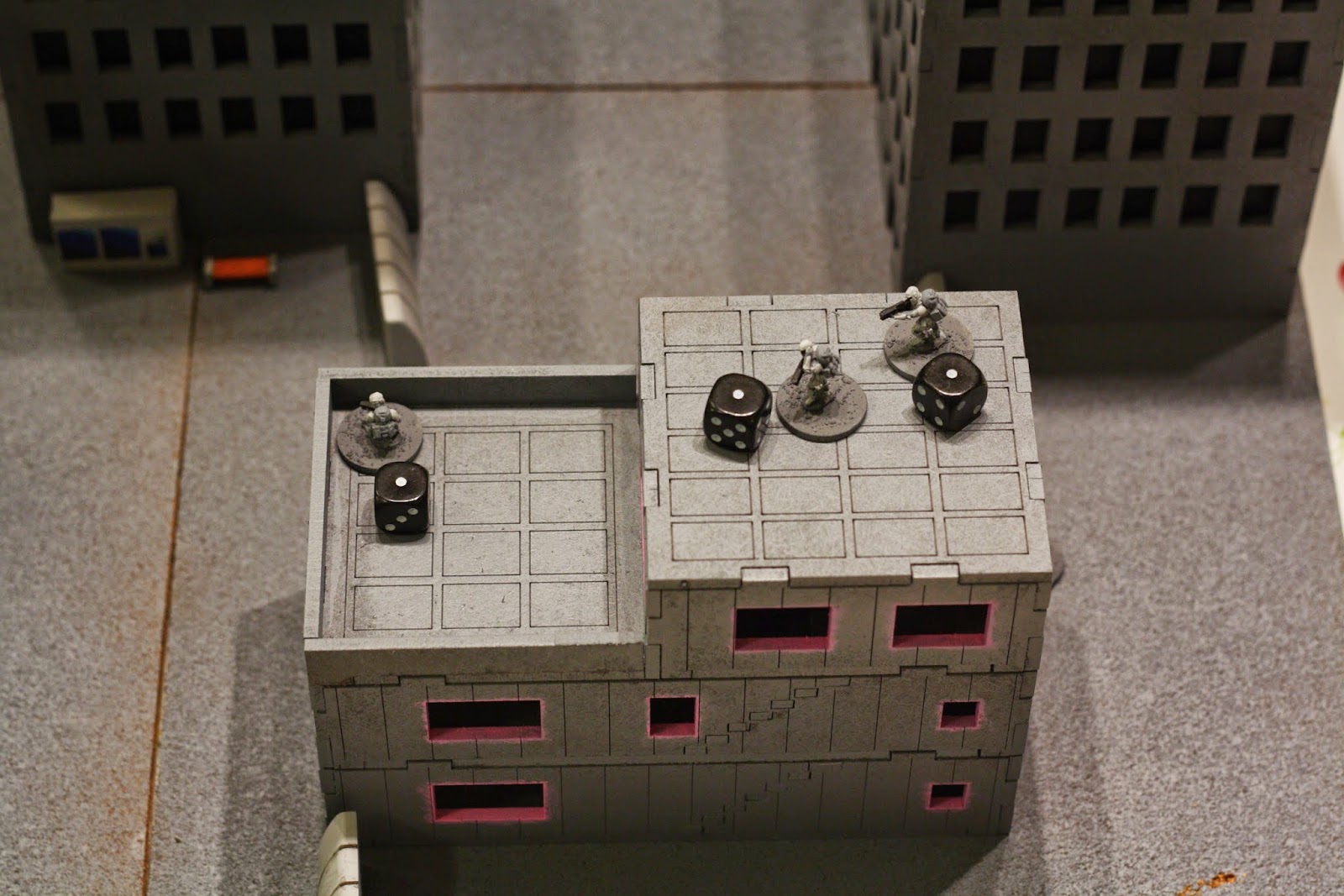 The next phase is fairly uneventfull, but the regulars manage to unpin the commander and a trooper. Lots of rounds are being traded, until the militia manage to pin all but one specialist on their last activation. 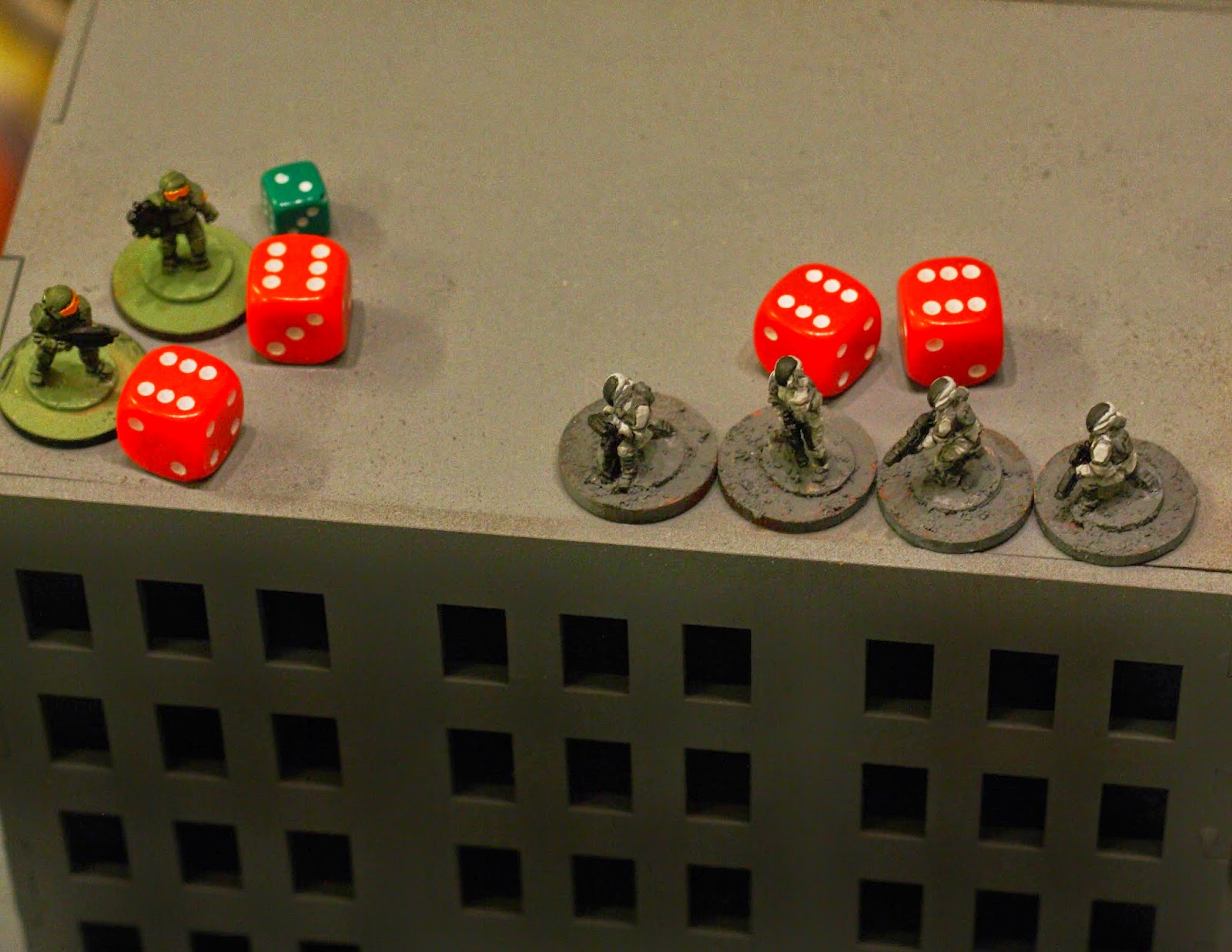 Being nothing if not committed, the platoon commander now assaults the marines inside the building. Several rounds of fire are traded, but eventually both sides have lost 2 soldiers. With their commander out of action, the Tyrians are in a thight spot! 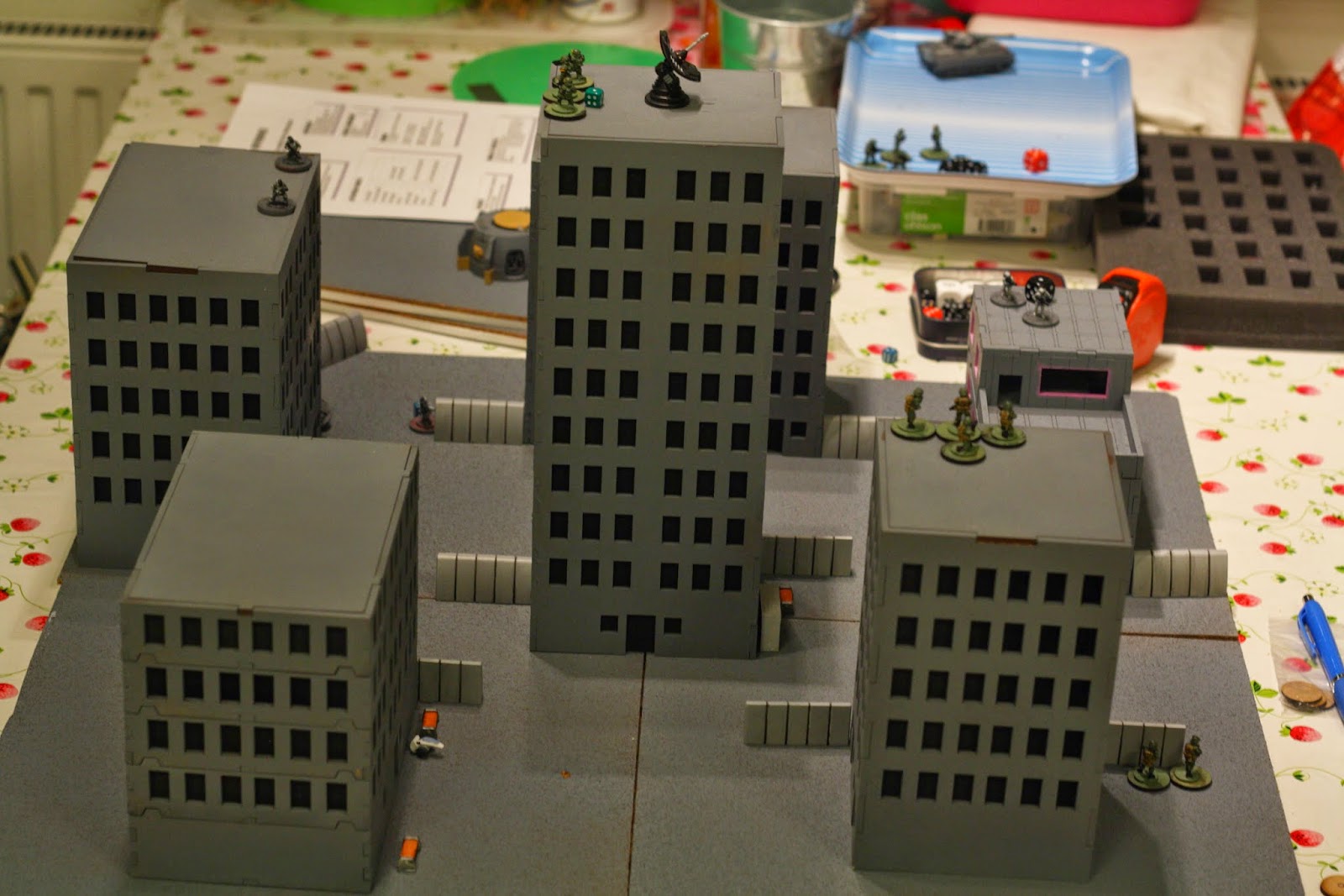 The state of battle, seen from the Tyrian side, just before the decicive moment. 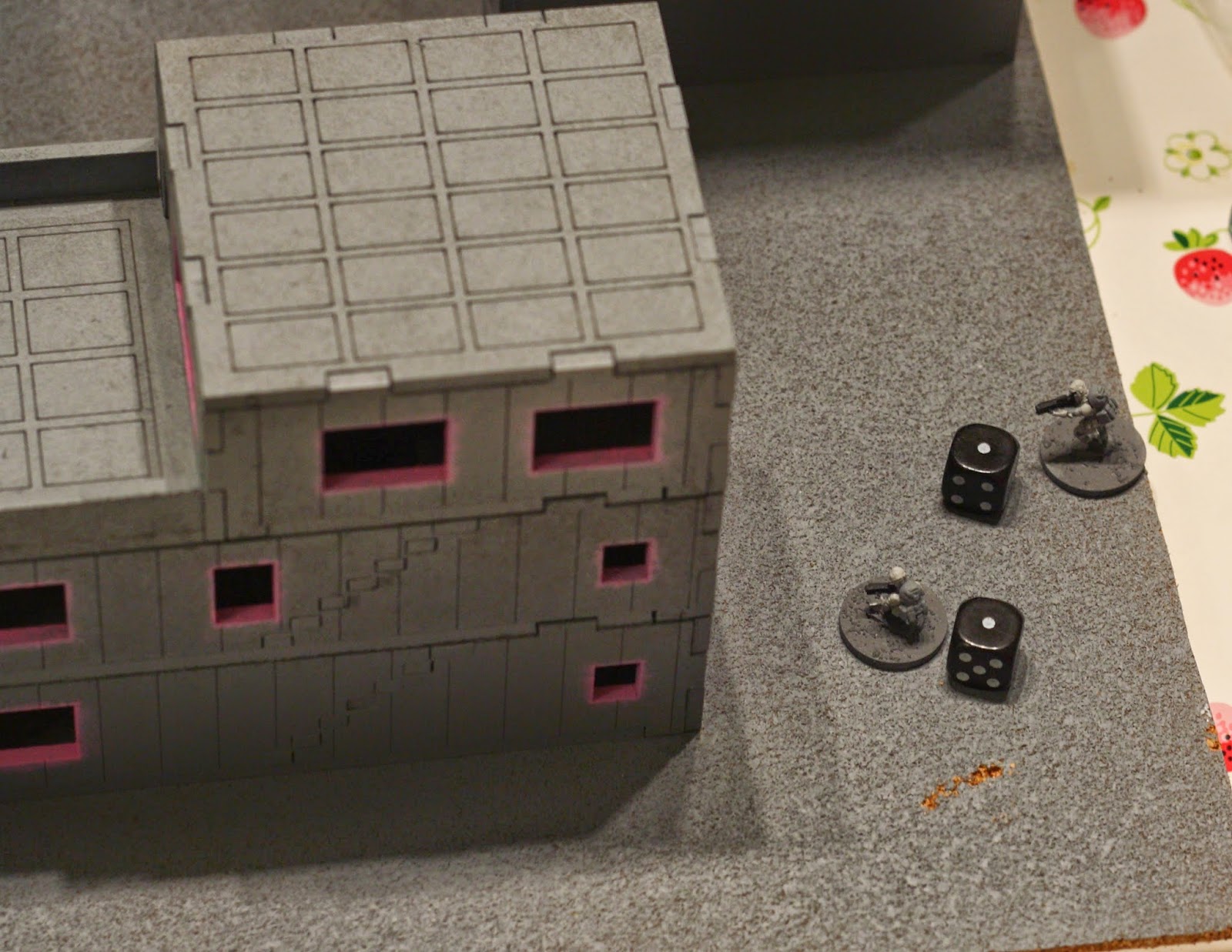 At this point the battle looked like it was going to turn into a real stalemate, the good cover both sides occupied made disloging any troops very hard.
On their first activation, 2 of the militia men managed to pin the specialists, who started to fall back, inch by inch.
But the decicive moment came after just after that; The militia rolled a 6 for activation, activating the remaining 4 troopers, including the SAW.
Soon a torrent of fire was making itself known to the USS soldiers, driving them back. (enough pin results were rolled to force them all to fall back).
Their nerve finally broken, the specialists retreated.

Being outnumbered by better than 2:1, the marines had little choice but to fall back.

A good game, even though it got a bit static. Next time around I will have to use even more cover, and maybe make the Buildings non-accessible, to encourage more manuvering. I'm also looking forward to testing PA and mechs, and some of the alien traits for less human opposition.

I like how the game plays, I thought that the relatively low casualty rate would put me off, but it feels right. The pinning and opportunity fire makes every choice a hard one, allowing for lots of interesting tactics!


I have a few finished pieces waiting, among them the first of the Tyrian PA, and another AAR, but of a slightly more fantastical sort. So check back soon!

Posted by Alexander Wasberg at 21:57