The Defence of reactor 7; A FiveCore Company Command AAR

For quite a while now, the FiveCore system of rules have been my go-to for sci-fi gaming, most notably it´s Space Opera derivative, Five Parsecs.

Those of you who have checked up on the blog recently have probably seen my 3mm forces that I assembled to play bigger battles, and with the release of FiveCore Company Command I now had another system to test out!

At a glance, Company Command (hereafter called CC for short) like it´s parent game is built to be quick and simple, but not simplistic. In CC, each base represents a single squad or specialist, or an vehicle. Just like most other titles from NWG, the game doesn't have a point system, but a solid army generator helps create forces smoothly and efficiently, making every force unique in it's own right.

The focus of the game is combined arms, but from the perspective of an infantry commander, there are lots of rules for things like civilians on the battlefield, minefields, artillery support and air support. This game aims to simulate "realistic modern warfare", were it's easy to pin down an opponent, but hard to outright kill him. Like in real warfare, it becomes possible to win a game through the fullfillment of your objectives and forcing your foe to fall back, rather than making you slaughter his entire army.

The mechanics of the turn system and skill rolls remains the same as FiveCore, with some minor changes to accomodate the shift in the scale of conflict. You still roll shock and kill Dice, with 1s and 6s generating different results based on the dice in question (pinning or fleeing in the case of shock dice, and injury or out of action on the kill dice).

Unlike regular FiveCore, CC comes with built-in vehicle rules to allow trucks, Apcs and even tanks in your games. They are quite abstract, sorting vehicles into 1 of 3 categories, to facilitate ease of play from ww2 to moderns. I played this first game as a Sci-fi game, I think they work fine for the far future as well, since the mechanics only differentiate between three levels of threat depending on the armor of the target in relation to the lethality of the weapon used against it.
For example, a ww2 Sherman tank vs a german Tiger tank; the Tiger would have a advantage, and therefore roll more kill dice when it attacked, while the Sherman would have to try and get a rear shot in to have any hope of stopping the Tiger.

CC is of course compatible with the earlier FiveCore supplements, so if you want to have more detailed rules for vehicles(Heavy metal), or add skills and traits to your troops(FiveMen etc.), you can of course use them to flesh things out!

For those of you like me play a lot of solo games, there is a few tables and ideas for solo play, in my humble opinion these rules are perfectly suitable to solo-play!

The crowning glory of these rules however, are the campaign system. Just like the other titles from NWG, CC comes with a full campaign generator, allowing you to generate (or pick if you so wish) a conflict, deciding what year, where, why and how big a conflict it is. It allows you to track progress of the war in large, and could even tie in with skirmish actions played through FiveCore. The Scenario generator helps you generate random scenarioes, or at least give you a few ideas to help build your own.
You can of course play any past conflict you wish, using only the progress rules to track victories and defeats, making the system very flexible, no matter your preference.

Now on to the battle report:

On the desert planet Y.0213, the Solar Bloc have been preparing a raid on CSA reactors, hoping to take control of them to alleviate the their growing energy shortage on the planet.
The CSA sent an under-strenght mechanized company, not sure if the threat was real. It turned out to be very real.. 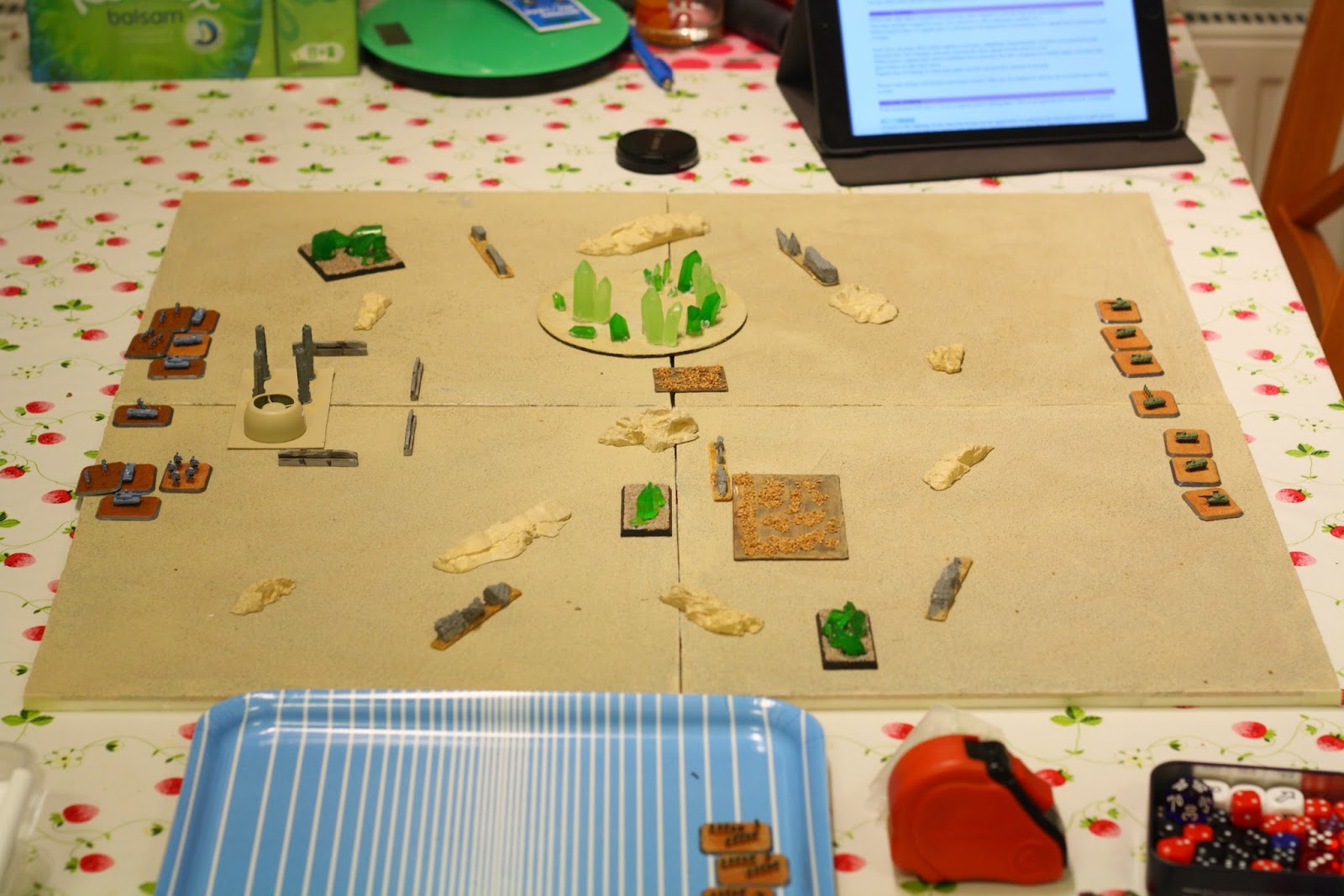 The area around reactor 7 would soon be a battlefield. 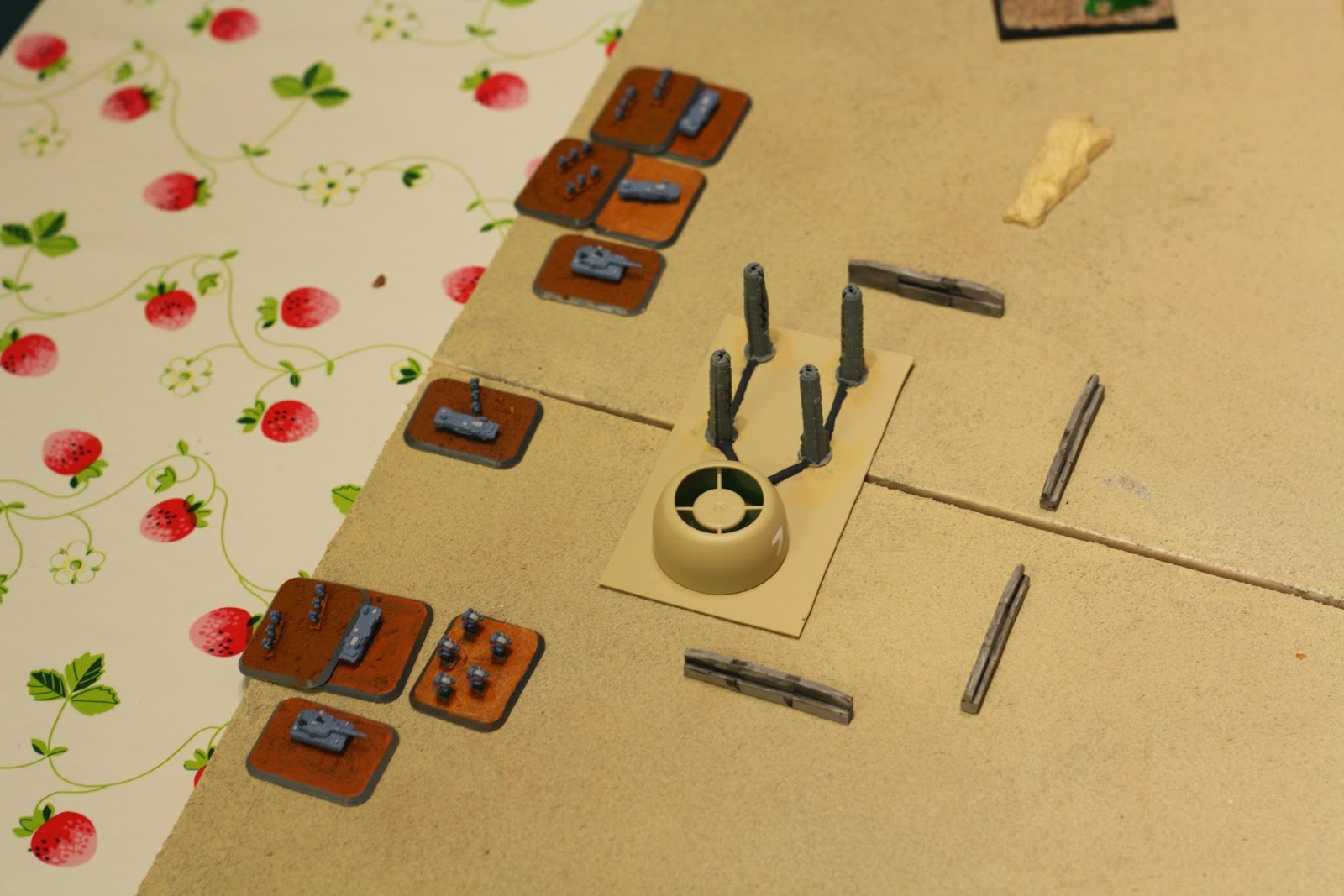 The CSA defenders, 3 platoons of mechanized infantry loaded into apc's, a squad of Power Armor and a pair of Chevalier MBTs for back-up. 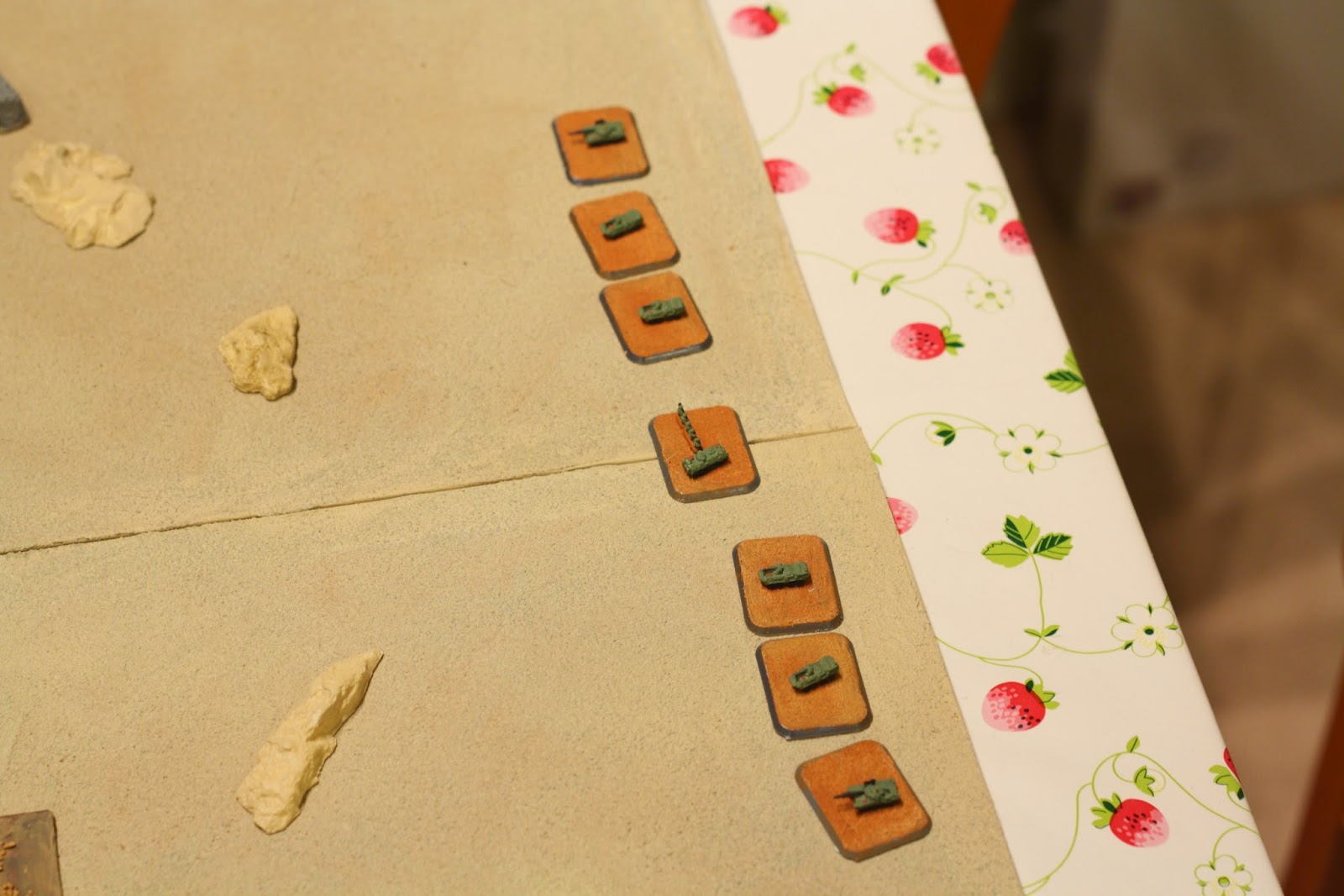 The Solar Bloc raiders, 4 platoons in apc's, 2 Bloc MBTs and their strike leader. 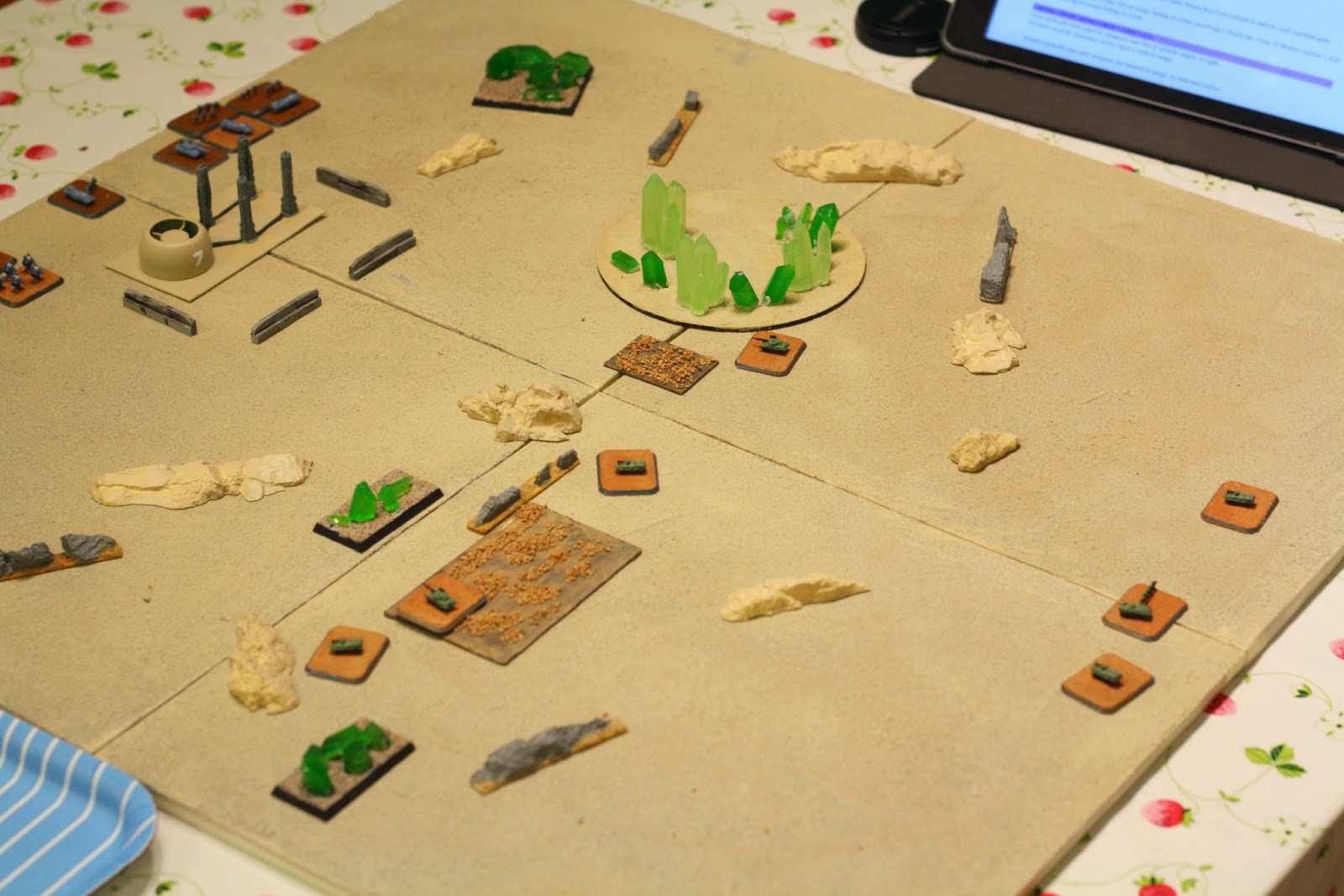 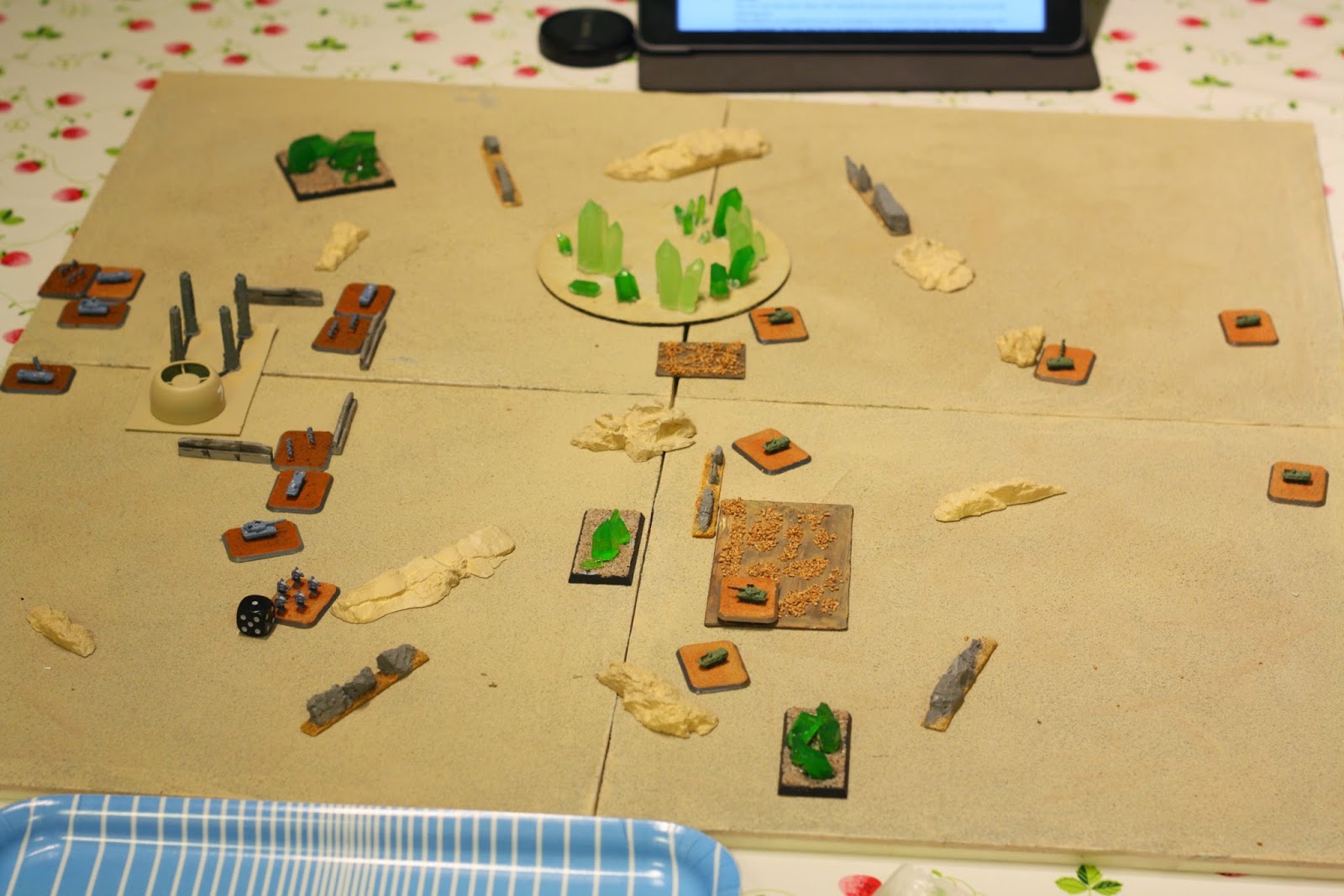 The PA unit is forced to hunker down as a stream of high caliber slugs is fired from the block apc's. 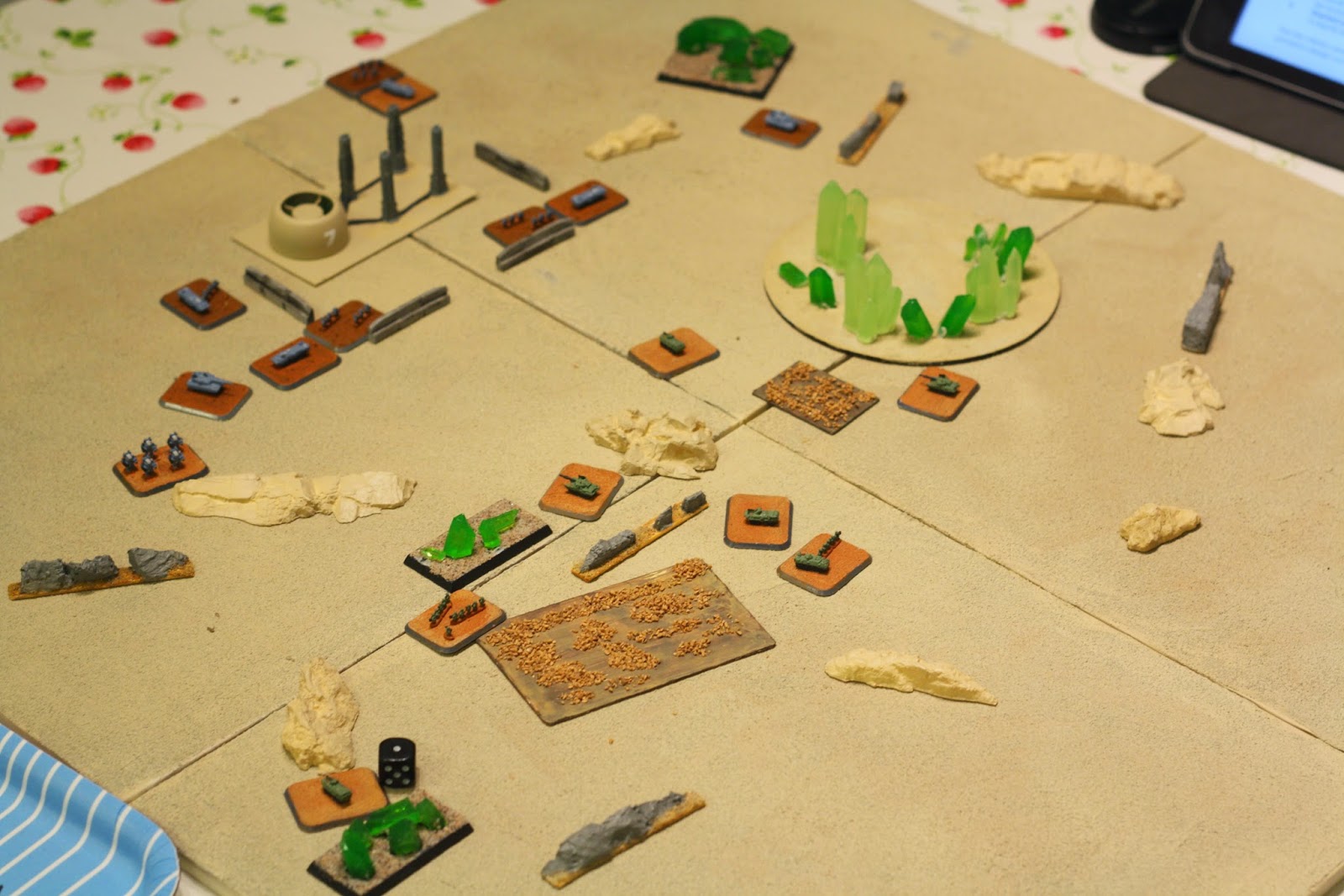 The leftmost apc has time to drop off it's complement of troops before the PA open up in retaliation, forcing them back into the cover of a nearby rock. 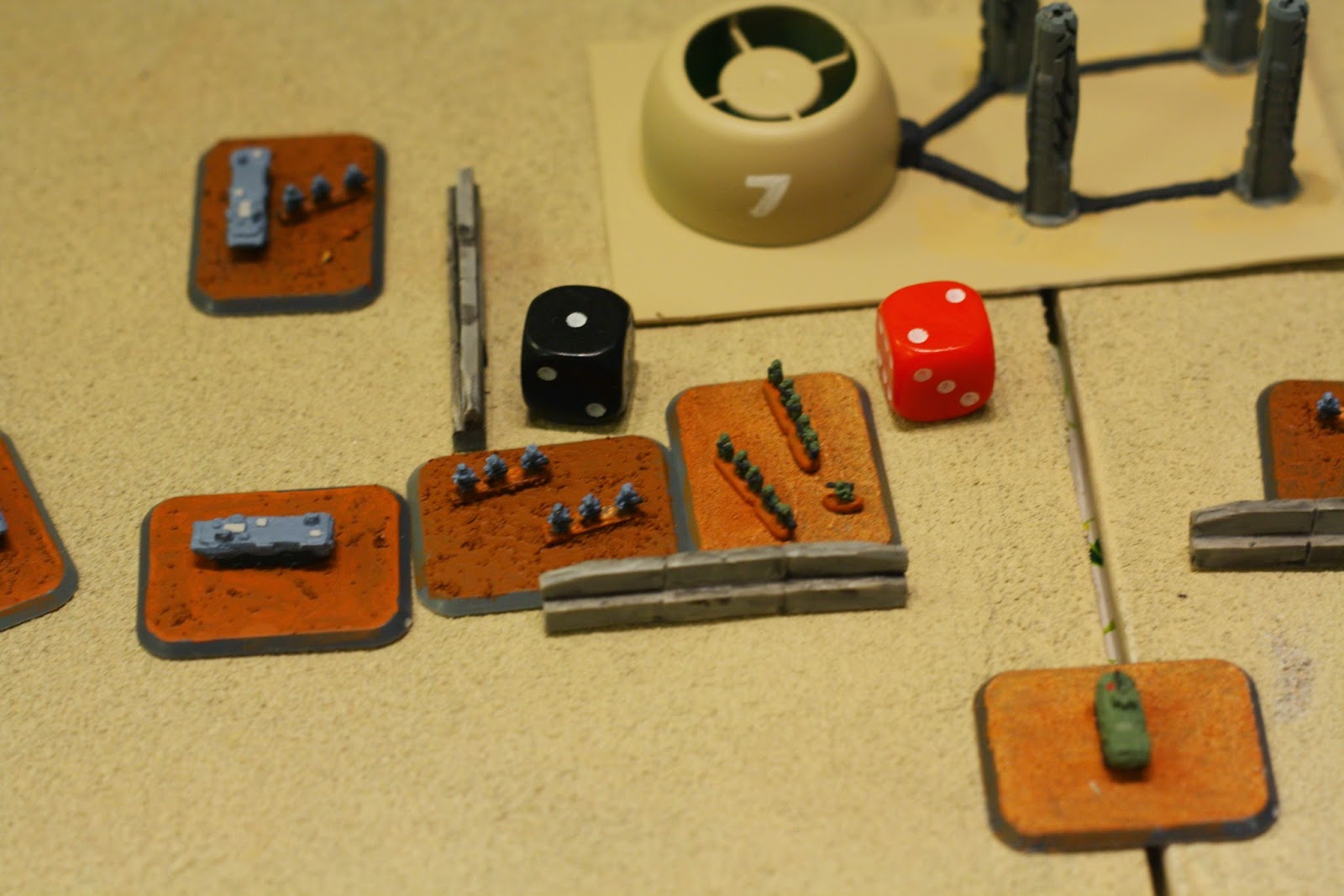 Braving the fire of the CSA defenders, a platoon of Bloc marines charges into close combat with their counterparts. After a bloody and desperate struggle, they just manage to come out on top, destroying their opponent. Knowing that they have another platoon just a few feet away, they turn and charge yet again.. 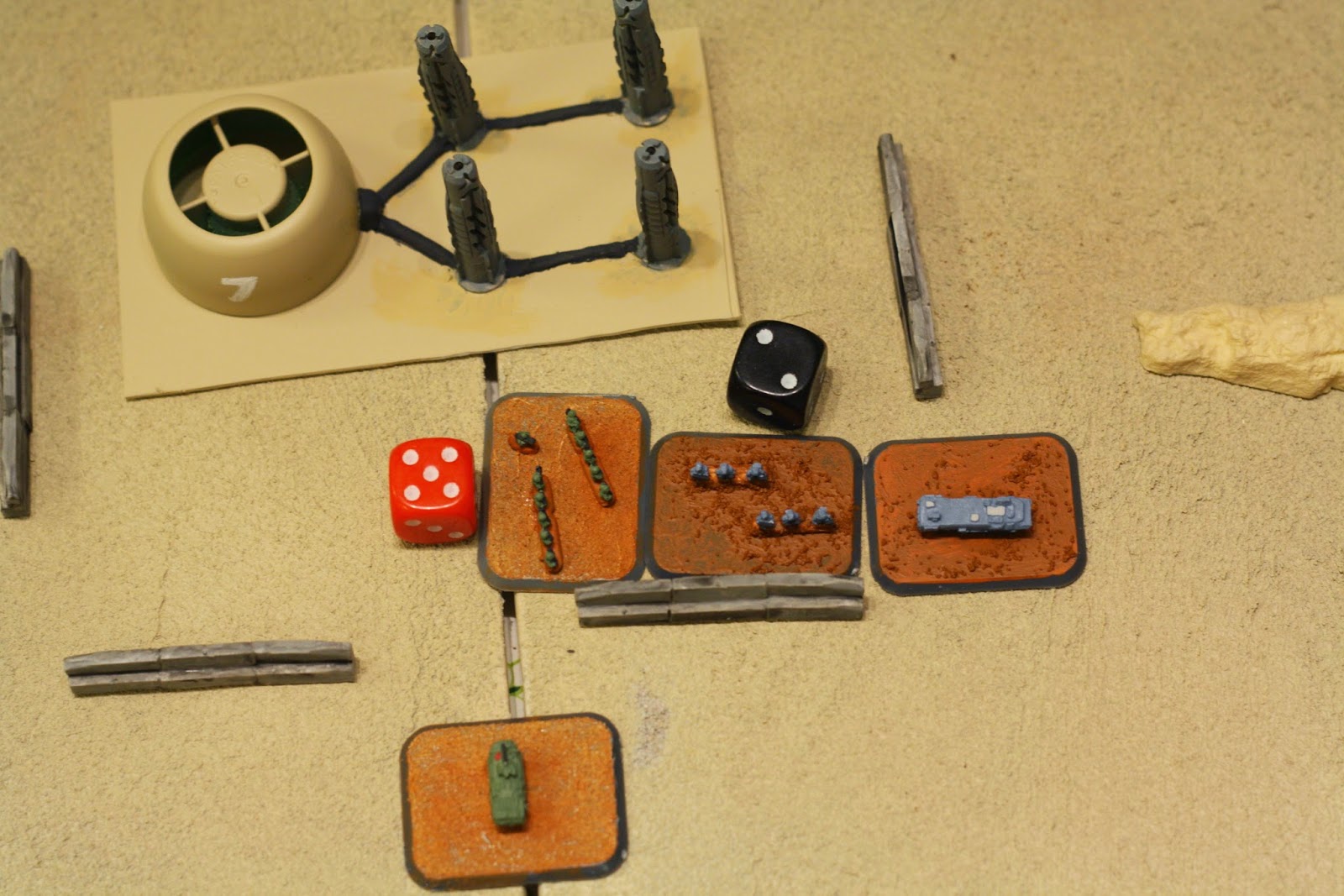 .. and they manage to come through the fire of the enemy platoon once more, engaging their foes at close range yet again.

Having cleared out the troops inside the compound the platoon have the reactor.

Now they must hold it.. 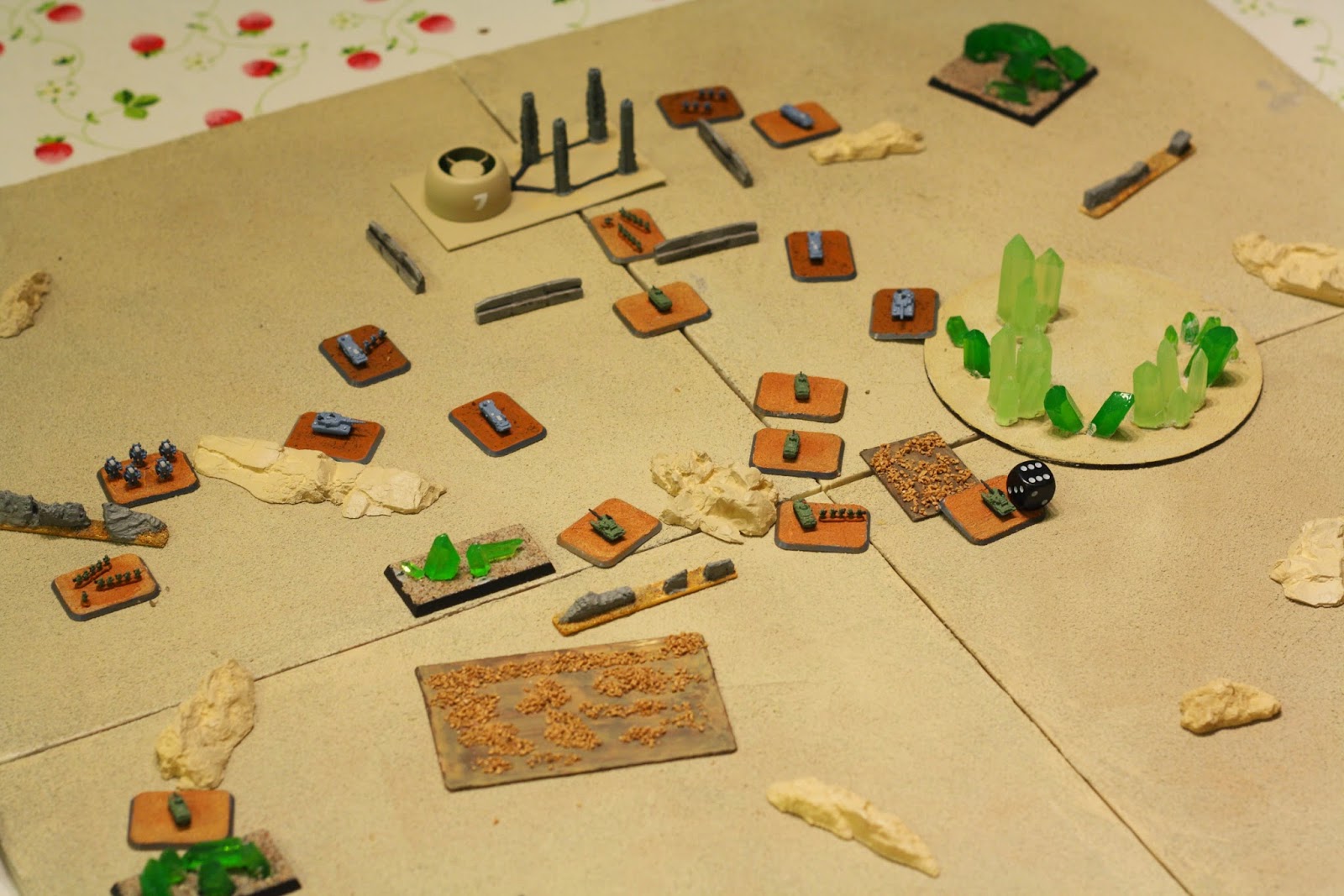 The armored support have taken to shooting at each other from what seems to be a safe distance, their Active protection systems working overtime to deflect enemy fire. One of the Bloc tanks tries to force his way through a nasty patch of rough ground, but only manages to break a running gear. He is now stuck. 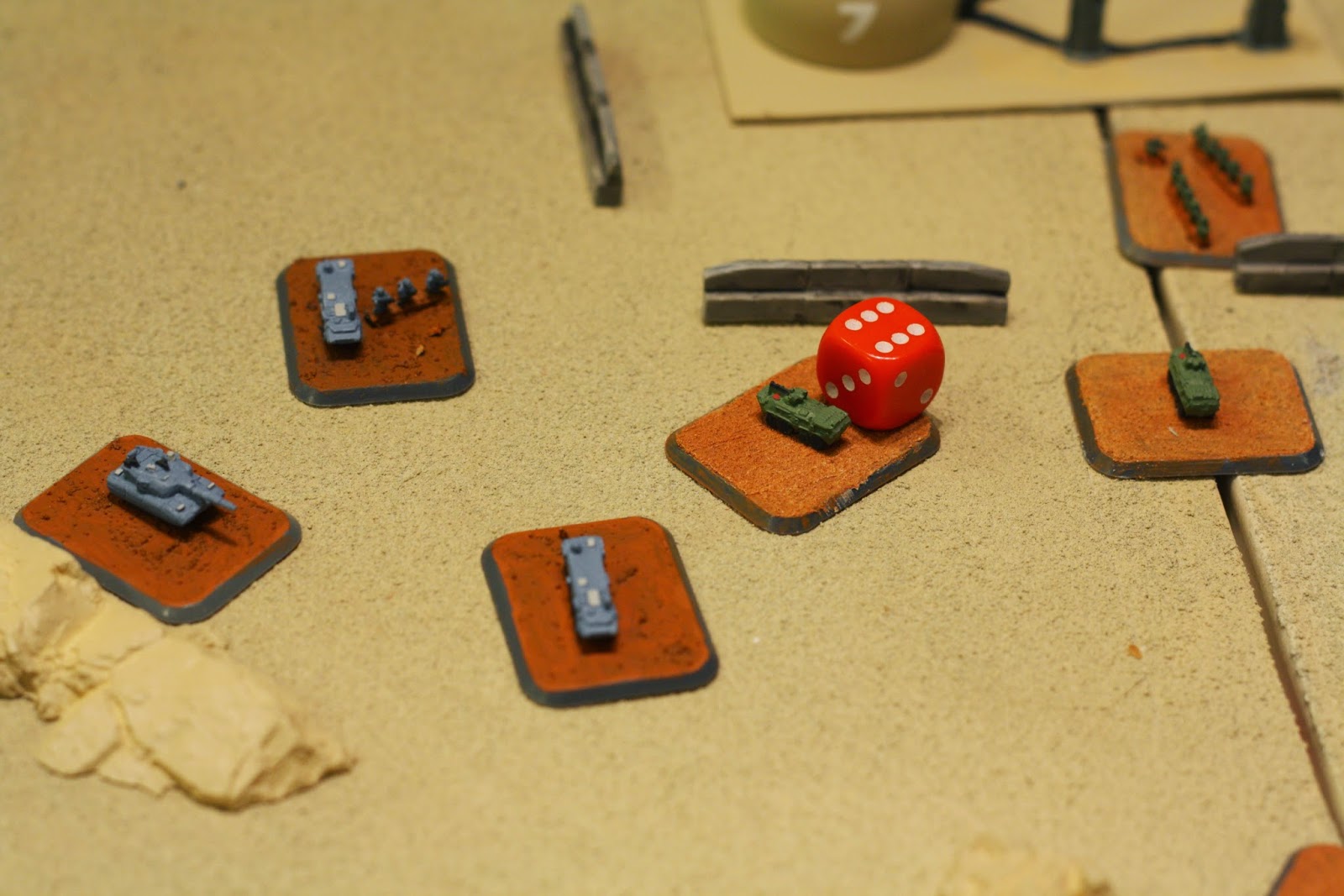 Hoping to replicate the feat of their comrades, another apc tries to reach the reactor, only to be blasted apart by the hard-beam cannon of the Chevalier. 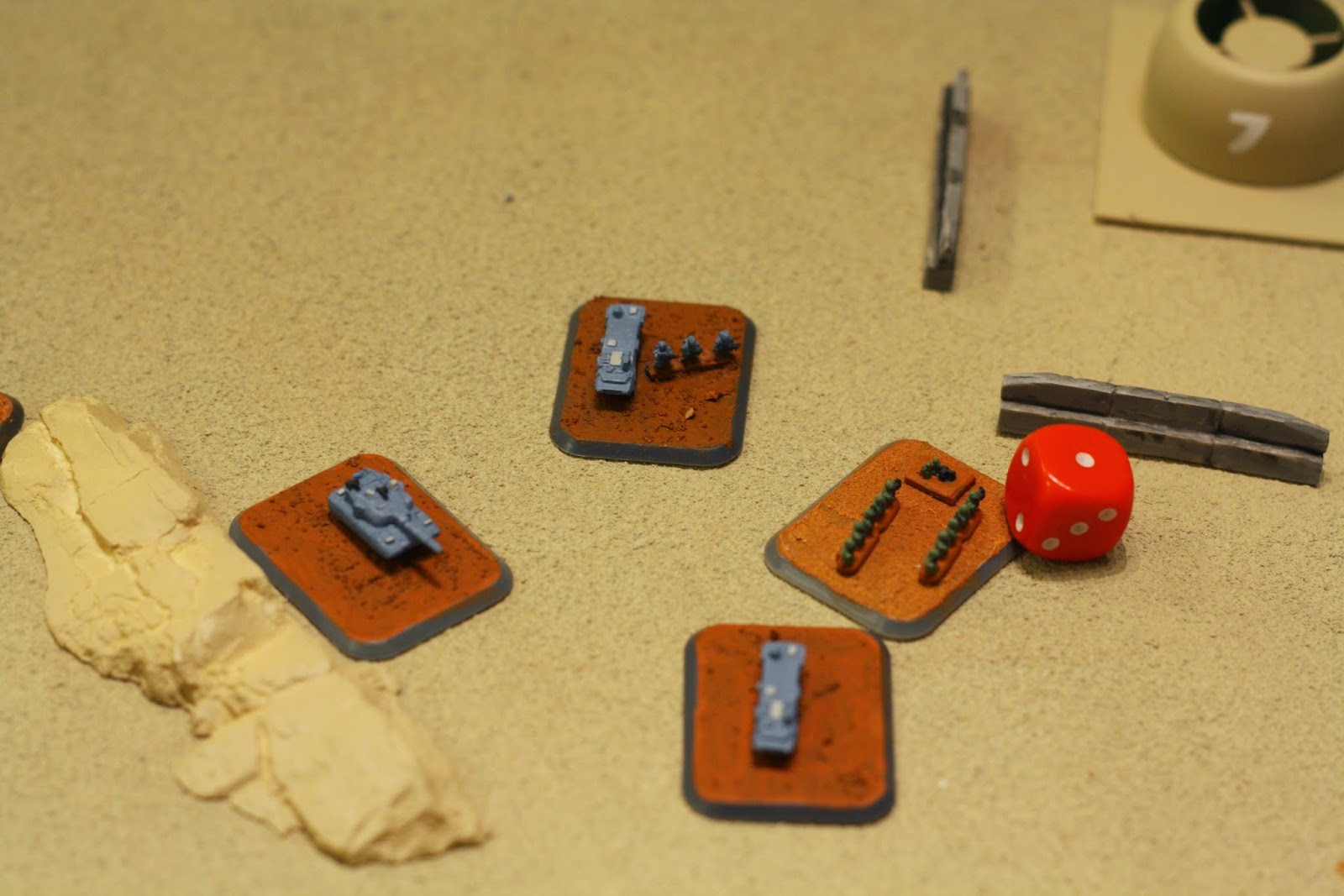 When a transport is destroyed and carrying a unit, the unit is not destroyed outright, but is turned into a light squad, meaning they only get to roll shock dice, and they are also considered wounded from the destruction of their vehicle. 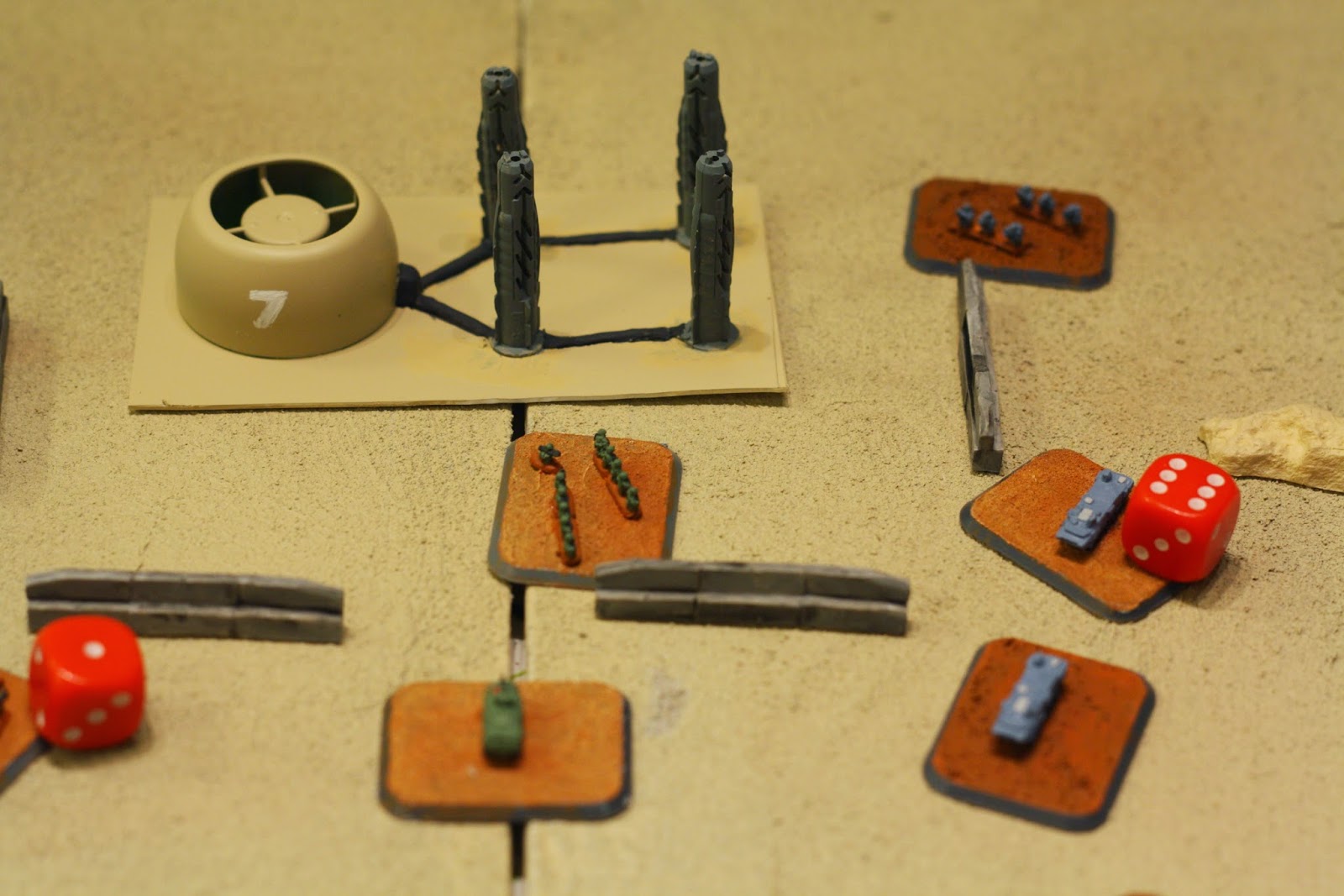 The lone Bloc platoon takes aim and blast apart one of the CSA apc's just before it has a chance to fire it's machineguns. 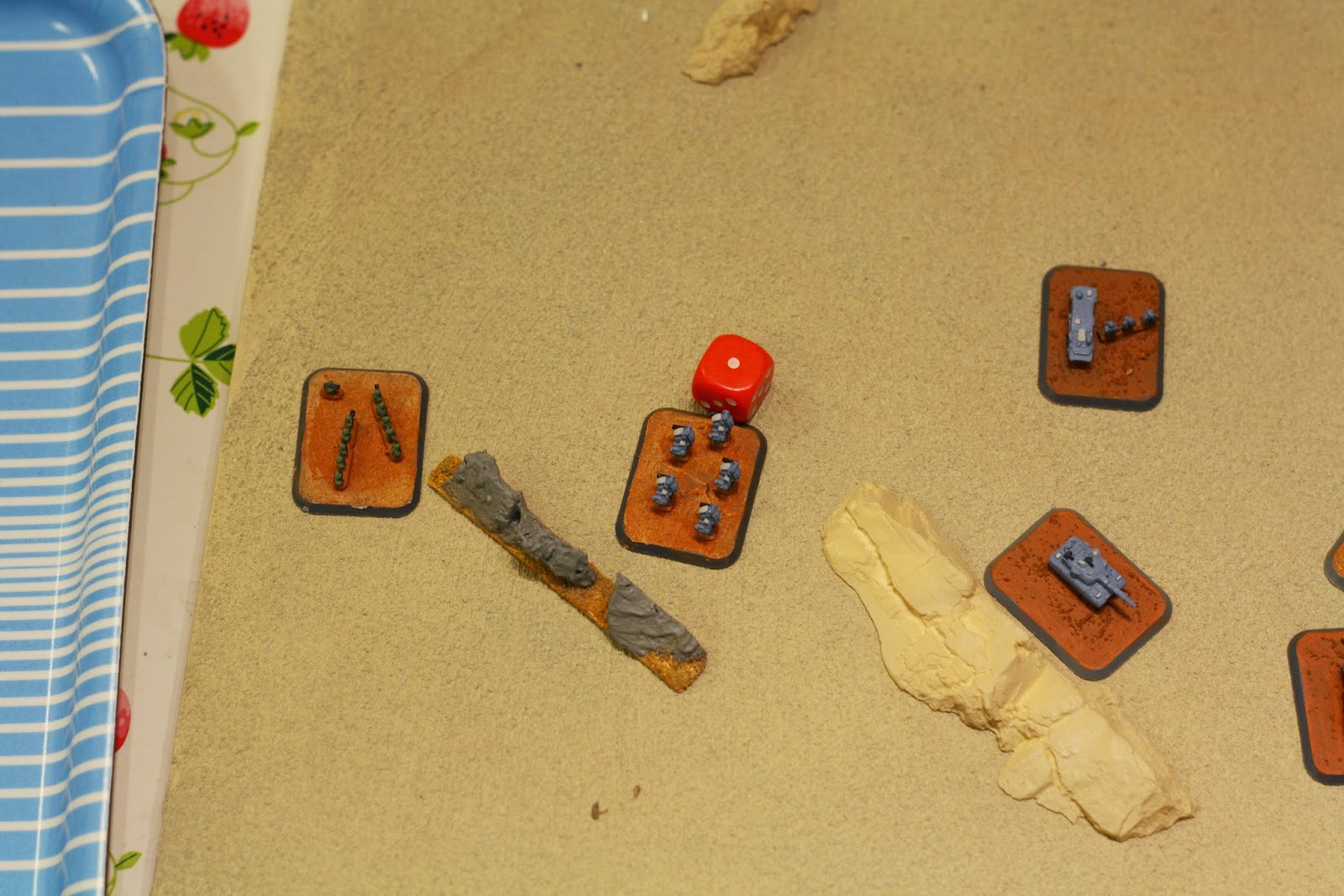 The PA sees an opportunity to charge the Bloc platoon that crept around the rock wall, but before they can reach them, the incoming fire is heavy enough to damage one suit, and they have to abort the attack. 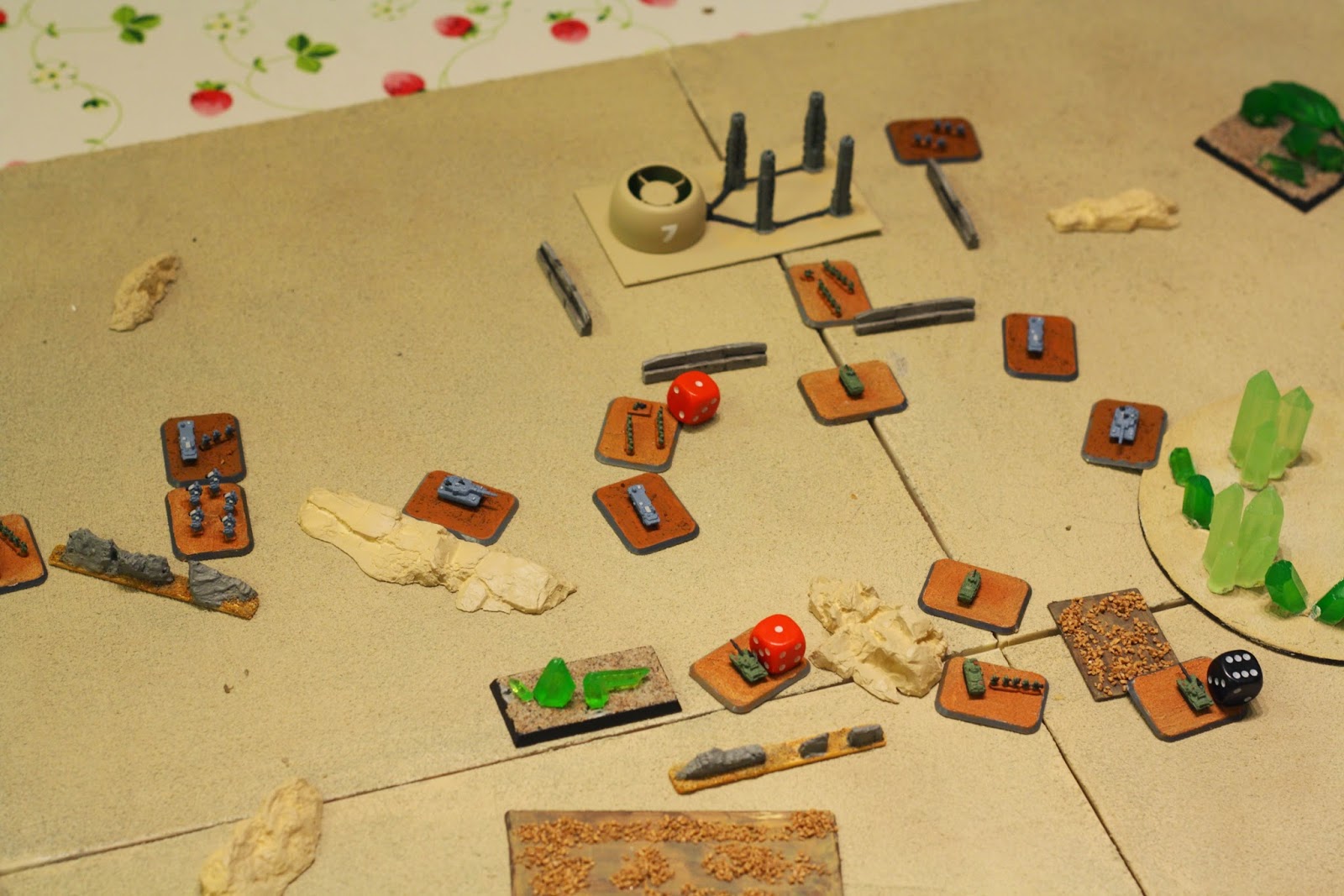 A Chevalier finally manages to wound the Bloc tank, after several rounds of shooting. At the same time, the command element reaches the PA, and their techs soon have them back up and running 100%. 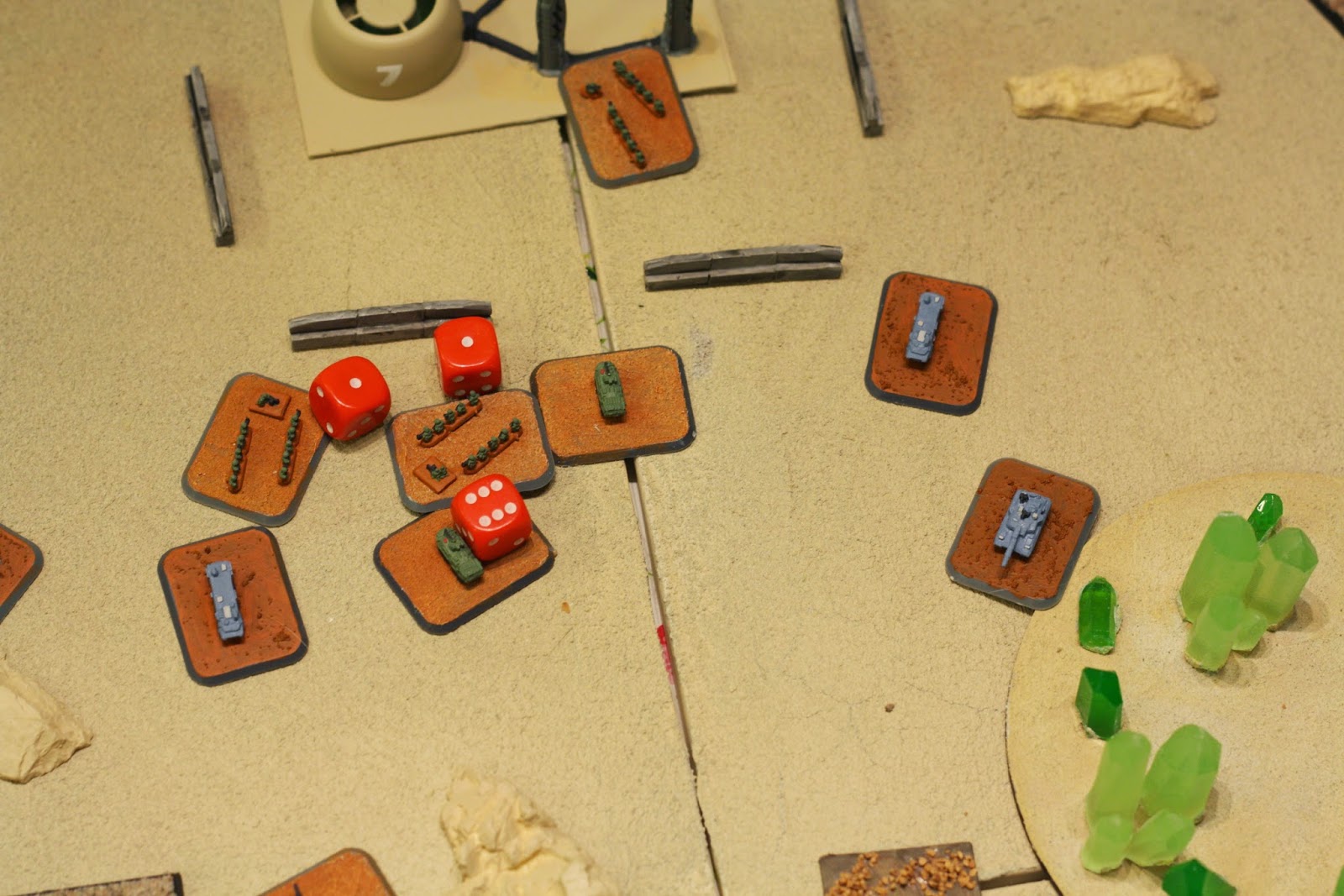 A good turn for the CSA, when the last Bloc apc tries to force his way into the reactor grounds, he promptly meets combined machinegun and hardbeam fire, knocking him out.

2 of the 4 Bloc marine platoons are now wounded, and have been downgraded to light units. 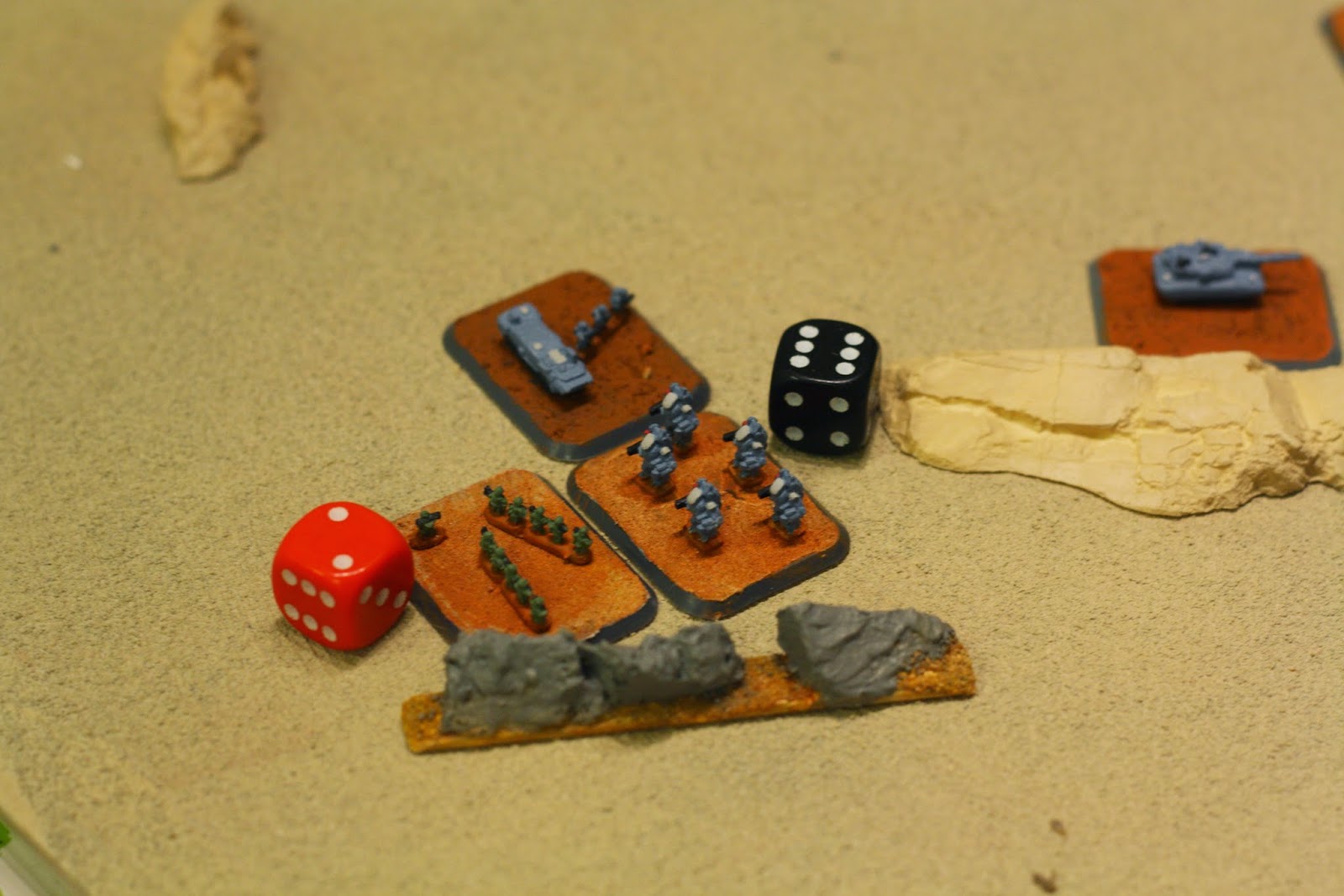 It didn't stop there however, the PA once again charged the Bloc unit, this time reaching them before any critical damage was sustained.

Super-humanly strong and designed to rip through tanks and bulkheads, the PA make short work of their prey. 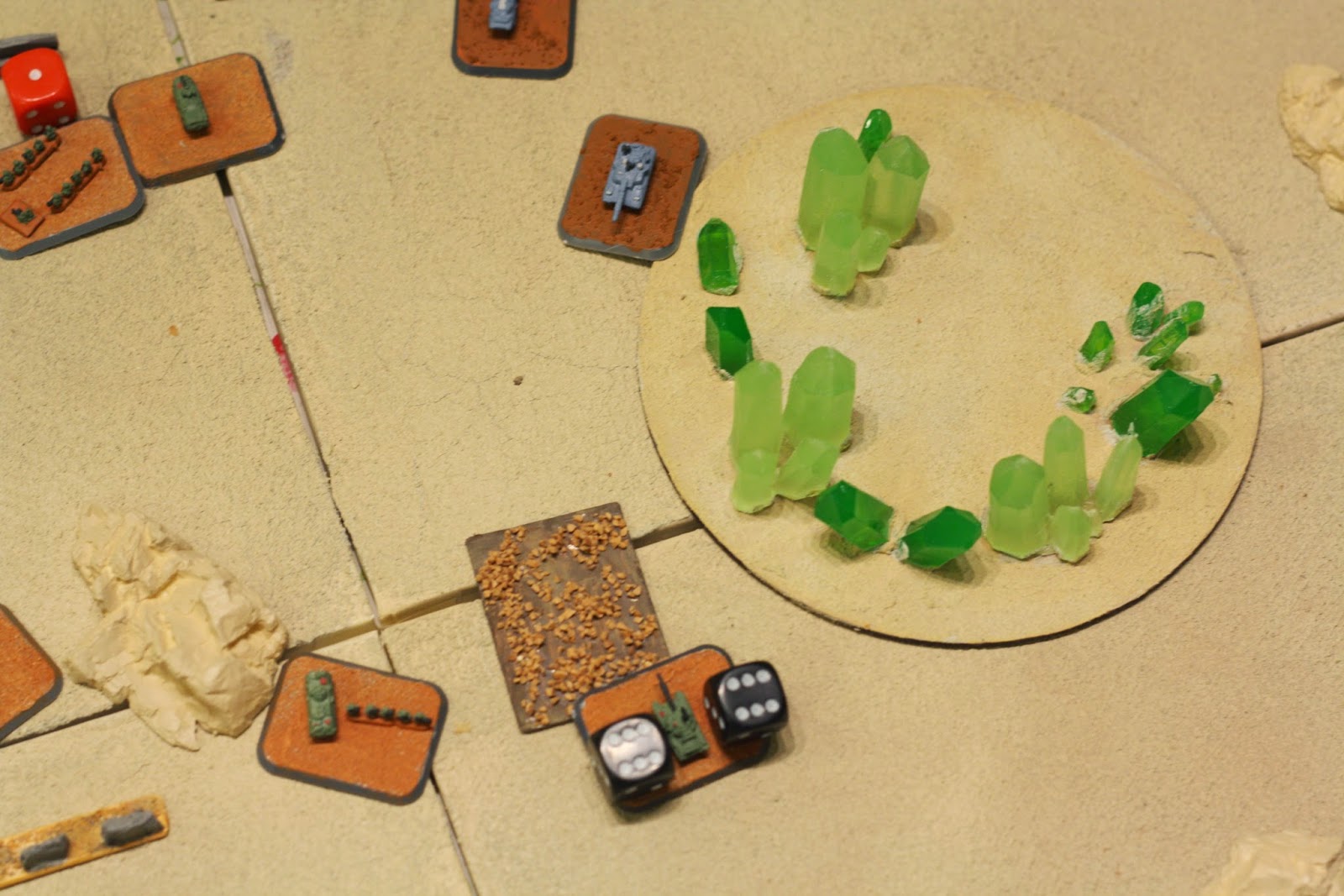 Being unable to move finally took it's toll, the 2nd Bloc tanks is damaged beyond use, and the crew abandons it, falling back towards their staging area. 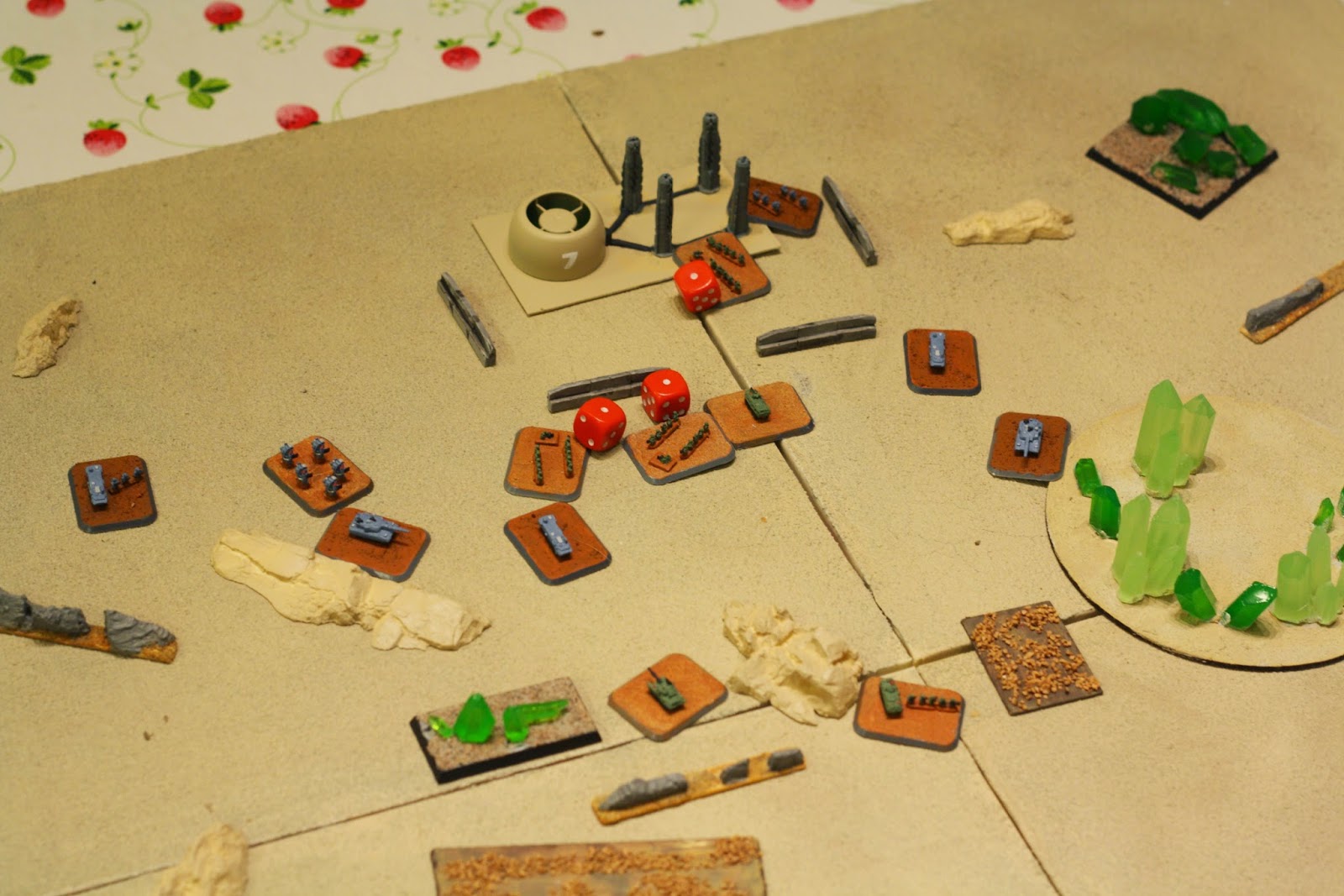 The last of the CSA infantry reaches the entrenched Bloc forces, and with grenades and heavy firepower they manage to damage them! 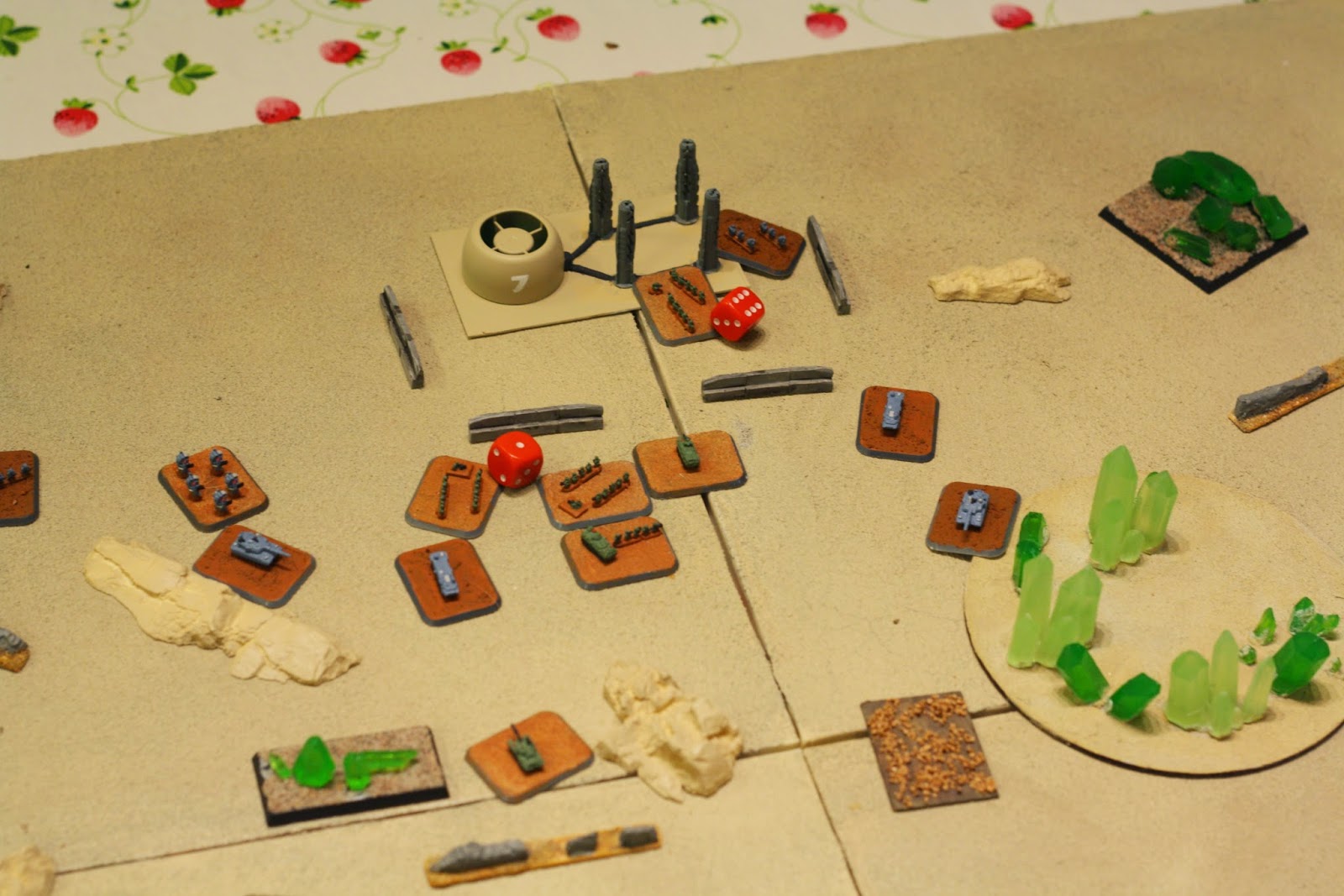 The PA, flush with recent victory, turn around to deal with the last full platoon the enemy has. Their machineguns and light AT guns shreds the ailing defenders, taking out the Bloc unit. 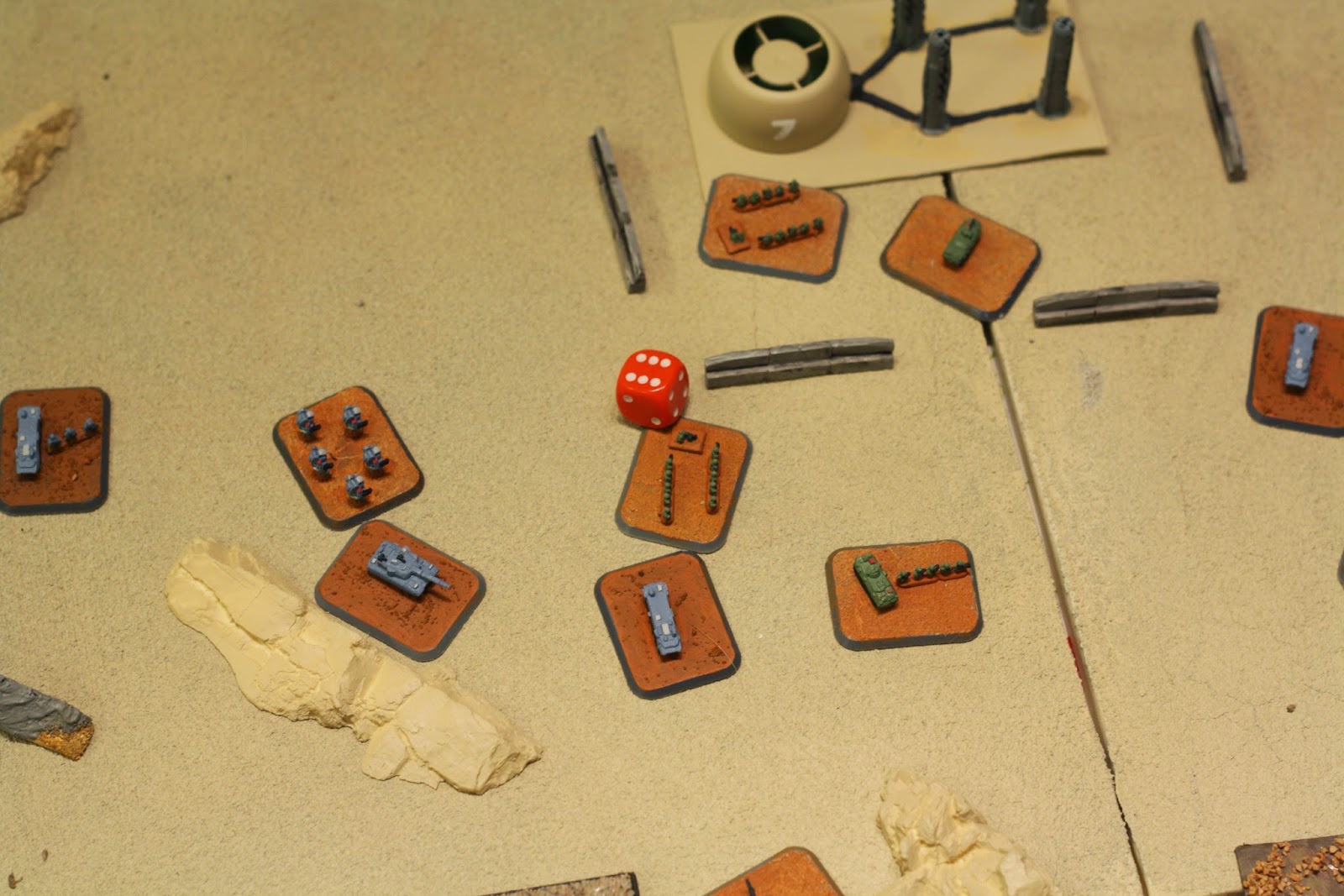 One of the light units picks themselves up and head in to try and hold the reactor, there was only 1 turn left before the battle would be over, and CSA would have to retreat.
The apc goes in as fire-support, to keep the last operating unit in action, driving back the CSA marines, as the PA kills off whats left of the other light unit... 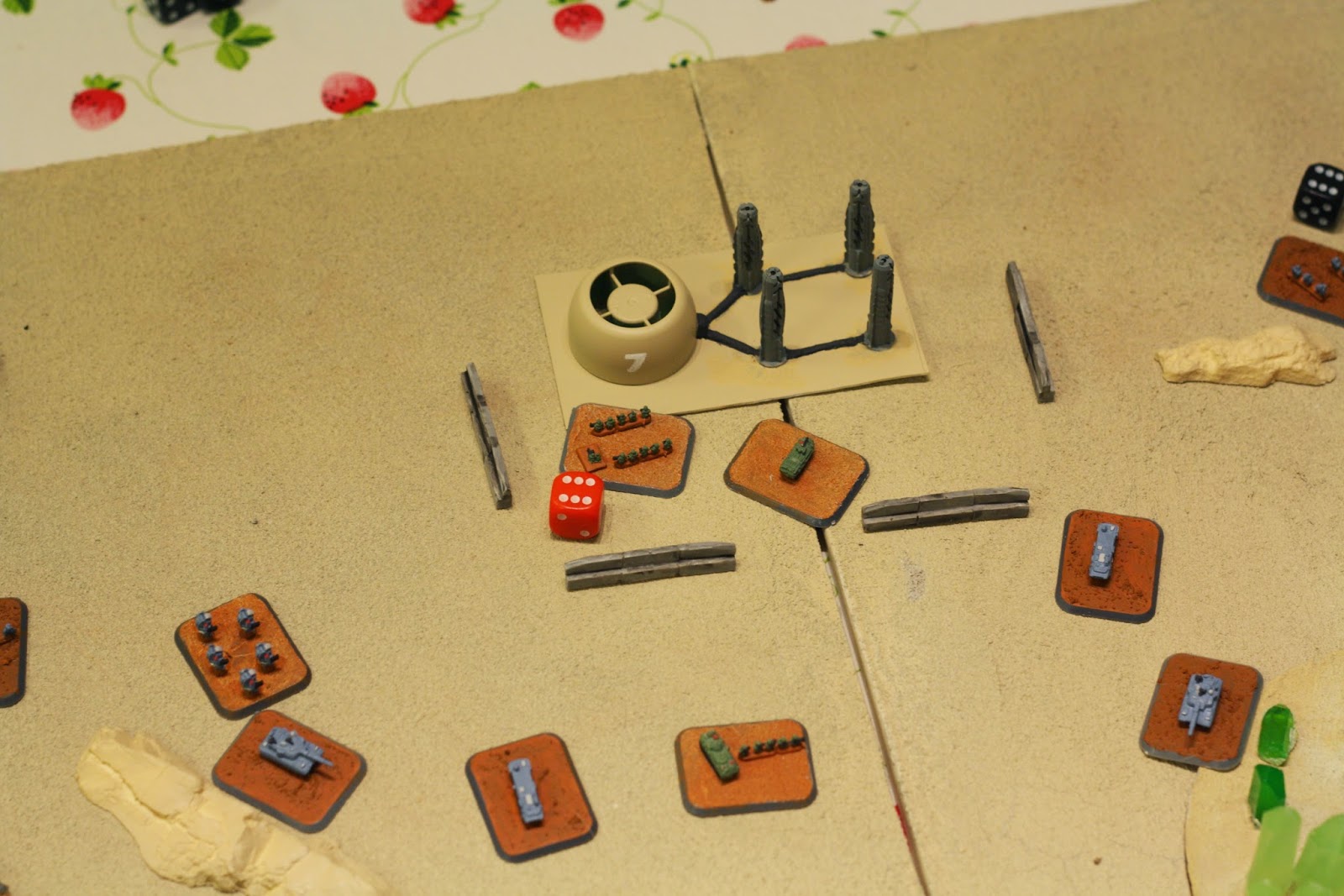 ..but even the armored transport can't touch the heavily armored Chevalier tank, who opens up with it's twin machineguns. The last of the light units is taken out of action. 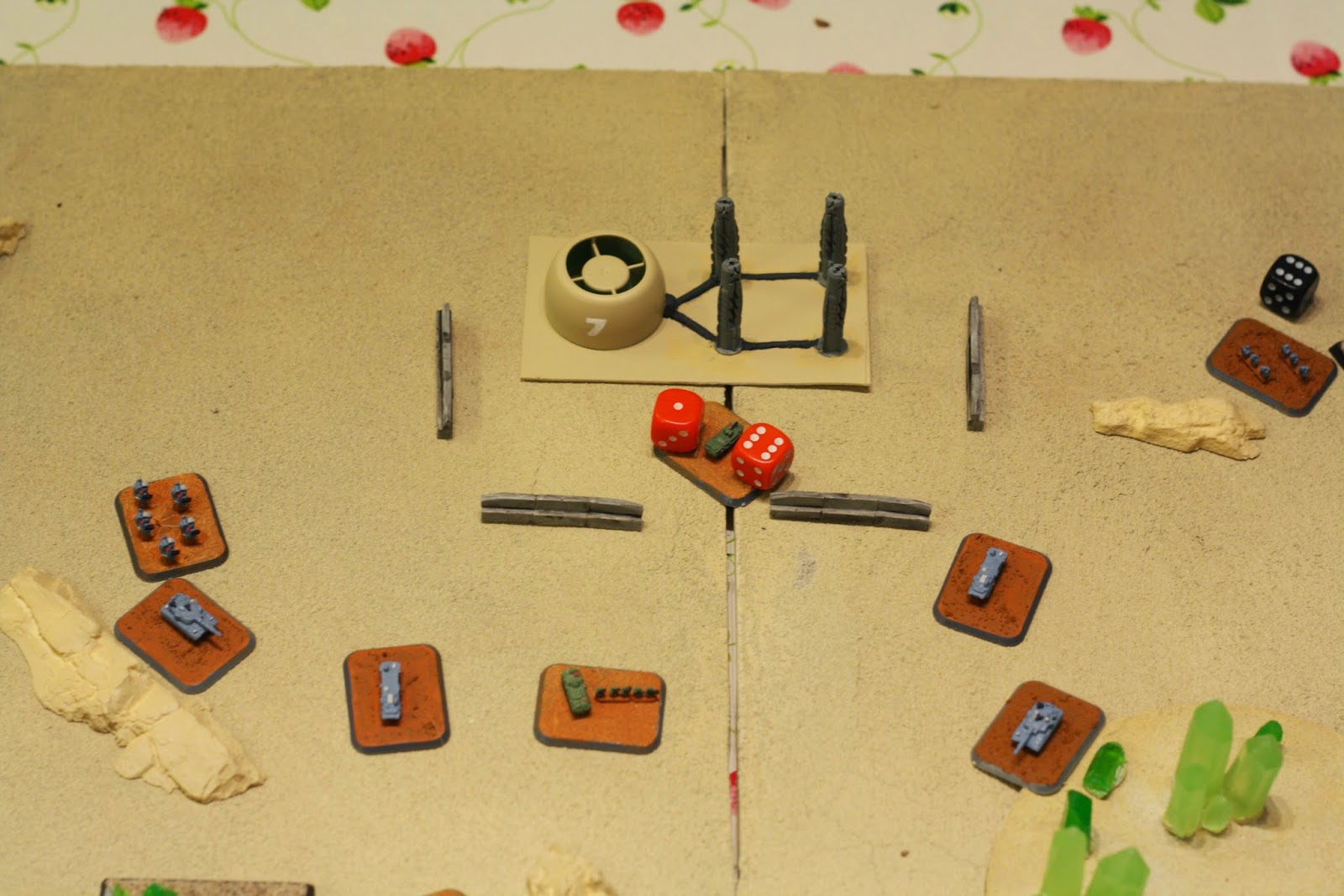 With no infantry left to hold the reactor, the Bloc can't hold on to the objective. A final hardbeam round blows up the apc in the yard, making the end to this battle. 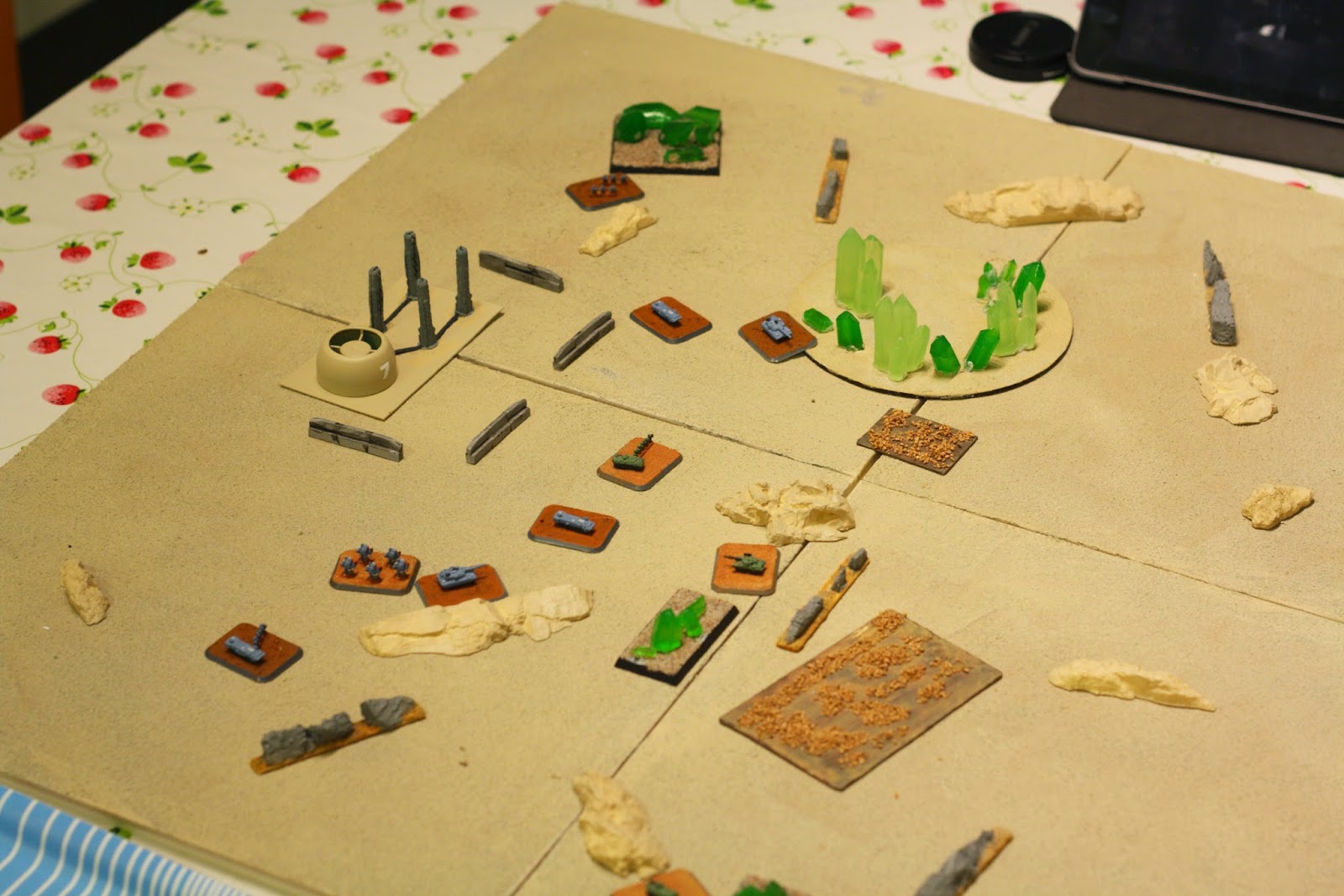 The field at the end of the last turn.

A narrow victory for the CSA!

Even if the battle looked decided a few turns before, it was really the loss of the last infantry unit that marked the end for the Bloc. This game was unusually bloody due to the assaults that were fought, but looking at the vehicles, and the tanks in particular, there was a lot of shooting, but the thing that ultimately took out the only destroyed tank was it's failed attempt at geting through rough ground.

It was a interesting game, and it will be even more so when I've had the time to compare it to a game played with Future War Commander, the rules I originally intended for these models.


As usual there are a lot of projects happening all at once, terrain mingled with 6mm fantasy armies being built alongside a 6mm spaceport and quite possibly some ship tiles for boarding actions, trying to finish up the vehicles for my 15mm NIJA army and so on..

I hope this write-up has been informative, and that it inspires some of you to try it out!

Posted by Alexander Wasberg at 00:56