Even though I only finished two of my big stompy robots so far, I decided to have them fight each other to try out Mekatac as a candidate for some giant robot games. 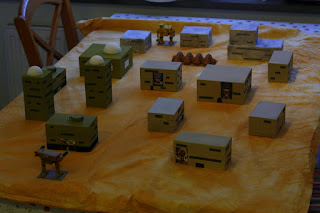 A unnamed city somewhere on a arid rock. The Big Boy (in yellow) is defending a reactor from an interloper, Firebug (the tan/khaki robot). 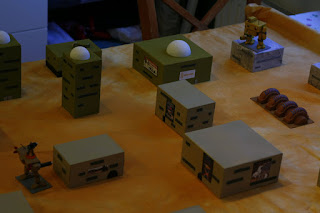 With Big Boy having a significant advantage in range, Firebug rushes in behind a building. Both the handheld and top-mounted rocket launchers of his opponent comes flying on a tail of fire.
The swarm missiles hit the building shielding Firebug, but the larger missile strikes him square on, blowing apart armor and rattling the systems of the robot. 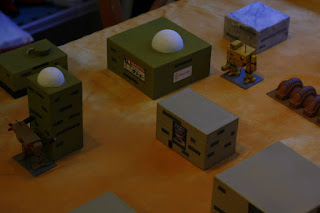 Big Boy fires another salvo of rockets while it's target is still out of range with it's deadly plasma cannons. This time the highrise shields Firebug completely however. 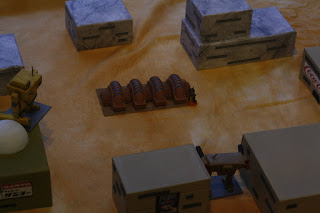 Deciding that it might be easier to destroy the generator than the enemy robot, Firebug fires his first bolt, melting and superheating the ferrocrete of the generators walls. But it's not down, for now at least.. 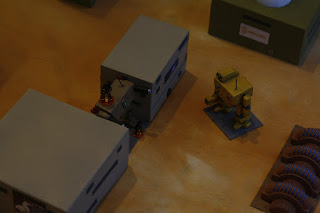 With attention shifted from him, Big Boy can move up and fire at close range, scoring several hits and damaging the legs of the intruder. 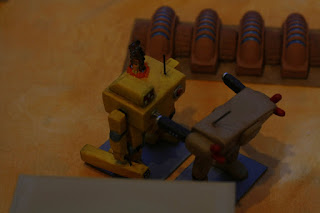 With one set of coils still recharging, Firebug moves up close, firing the second cannon at point blank range into the gun mount on Big Boy's face, melting the weapon and detonating the ammo stores as well. 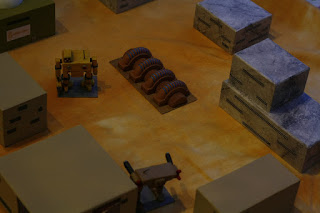 At this point both robots are severly damaged, Firebug is now suffering electrical fires that cause continous damage and Big Boy is all out of ammo to for his launchers and his rotary gun is melted. 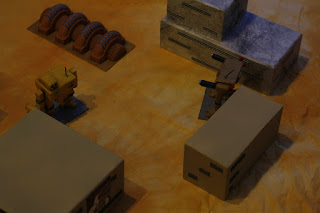 Being faster than the defender he fights, Firebug falls back from the only weapon his opponent can use, melee strikes. As he outpaces him, he fires on the generator again, this time blowing it sky-high!

At this point I decided to call it, calling it a draw as the defender would never be able to catch the interloper, and in a round or two the electrical fire would bring Firebug down anyhow.

The system works well, but I think it will become more interesting with more big stompy robots involved, and possibly a few support units per side.
Altough weaker and less deadly, support units would add some more options to each side, and go some way towards mitigating strenghts and weaknesses of individual units.

I've got another 3 big robots on the way, along with a few other bits and bobs as I started sculpting again.

The 5th tile for my new terrain boards are in the works, I hope to share some pics soon as well.

Posted by Alexander Wasberg at 23:58