The fringe is full of interesting stories and characters. Heroes and Villians, Tyrants and freedom fighters. In reality though, the truth is hardly ever so black and white..

On a small, insignificant dustball on the fringe, just such a story is about to begin.. 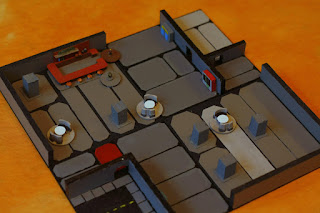 In a small dive-bar on the surface of this rock Vic is having a drink. His day haven't been great so far, and so he drowns his troubles. 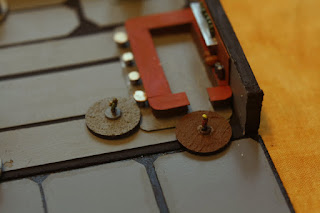 "Barkeep, have you got something for me?" Vic asked wearily.
"I'm afraid not. Most work has gone off-world since the mines ran dry, not much left on this hemisphere anyhow." He replied.


A new voice rings out in the mostly empty building: "You Vic?" 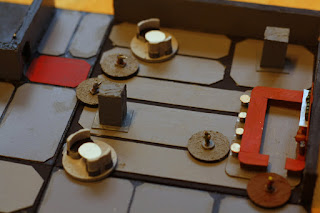 Turning around slowly, Vic takes in the newcomers. He's not impressed by the local thugs. "Who's wants to know?"
"The boss wants to see you, you best come quietly." One of them wheezes through his rebreather, waving his guns around.
"If you've got a job for me, I'll consider it" Vic growled. "Otherwise, get out of my face."
The newcomers level their guns at him. "We wasn't asking, Vic." 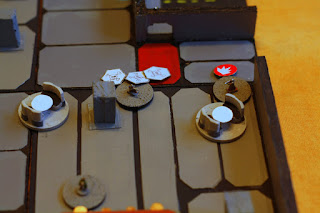 "You've really made a mistake now boys." Vic gets a wicked grin on his face as his hand suddenly whips out with his custom shotgun.

The boom of the shot is hellish in the confined space, and the first of the thugs turns into a pink mist as the shot rips through him.
His comrade narrowly escapes a similar fate as he dives behind a table. 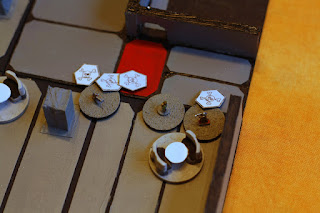 As Vic slowly walks over, the thug looks to be regretting his cocky words.
"Look man, I only followed orders. You don't have to go crazy on me like you did Lez!" he stammers.
"Where can I find your boss?"
"In the old Omni-corp building on mainstreet, you can't miss it. Ask for Mr Guntz. I told you what you wanted, please just let me live." the thug pleaded. Vic pulled the trigger. "Can't have you come after me later." he said over his shoulder.


A short time later, CC and Kai, his companions join him in the parking lot of the bar. 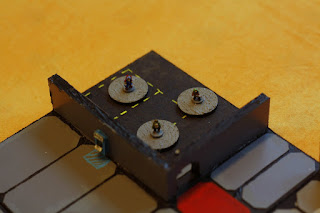 Sharing what he'd found out, he asked for a decision: should they go see Mr Guntz?
"I figure we might as well, we are running low on funds from the last job." Kai offered.
"You know me Vic, I'll follow your lead." CC nodded at their bloodsplattered leader.
"Let's go then, see what he wants."

At the offices of Mr Guntz. 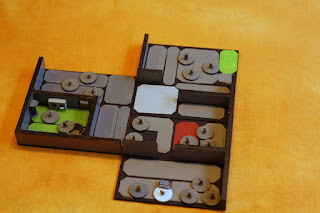 As they enter the small office, Vic and his comrades notice the heavy presence of thugs. "Let's not start anything in here, we're here to talk." Vic cautioned. 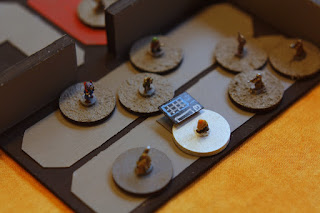 "Mr Vic, I'm sorry if my boys caused any problems. You know young people, always so eager." Guntz smiled apologetically.
"They are no longer with us. What did you want so badly you sent an armed "escort"?"
"Straight to the point, I like that. I've been asked to look into some potentially worrying research by the Rakuen Biotech corporation. I could use your team's skills to investigate their abandoned facility on the outskirts of the great desert. To keep negotiations and stalling to a minimum, I've been authorized to offer you 10.000 UC upon delivery of any and all research material from that facility."

"That's a lot of credits for what seems like a pretty standard crawl. You have all this muscle, why not do it yourself?" Vic asked suspiciously.
"My employer does not wish to be directly linked to this act, as I'm sure you can appreciate Mr Vic."

After a short discussion, the team choose to take the assignment. It's too good a payday to pass up, especially with funds running low. 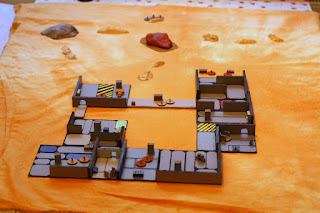 The edge of the desert, close to the abandoned Rakuen facility. 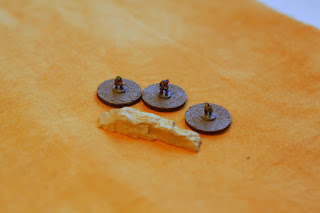 "It doesn't seem to be as abandoned as they claimed" CC snorted.
"Let's try a stealthy approach then, maybe we can even get the data without a fight." Kai suggested.
"Good idea, let's go people." 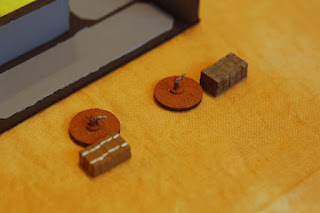 The guards on duty seem to be more than your average thugs or militia, suggesting that somebody else is looking for whatever Rakuen might have left behind. 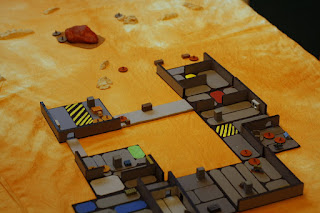 The guards catch something moving in the corner of their eyes, and move to investigate.. 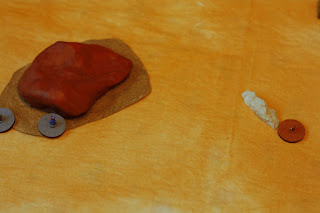 ..As he move around a cliff, he spots Kai! In his haste his shot goes wide, but the mercs in the compound is now alerted! 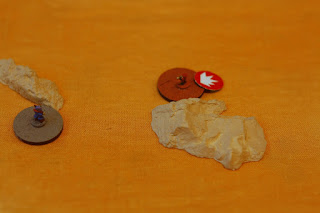 Moving with blazing speed, Kai slams into the guard, winding him and bowling him over, but fail to take him down. 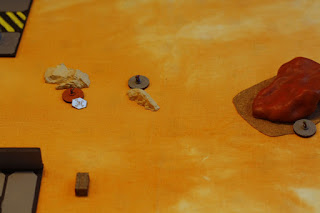 CC moves around the rock and into view of the pinned guard. Taking careful aim, she squeezes the trigger, and the guard is permanently silenced. 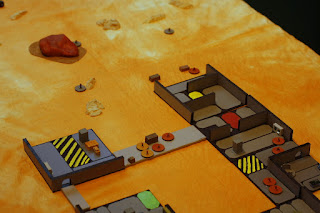 Inside the compound a frenzy of activity erupts as more combatants move to support their comrades. 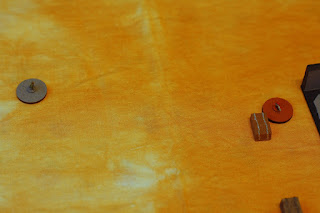 Vic dodge a slug from the guard.. 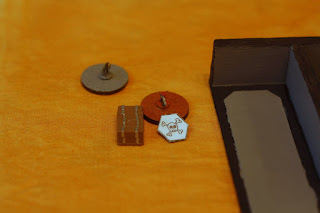 ..But it trips him up, and his own shot goes wide as well. luckily for him, CC is looking out for him and before the guard has a chance to capitalize on the opening, a rifle bullet slams into the side of his head. 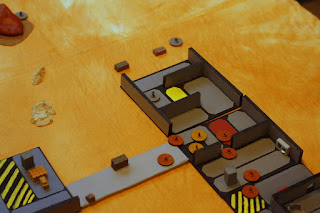 Kai ran towards the door at full tilt, hoping to catch at least some of the attackers unawares.
"Slow down Kai, we don't know how many of them are in there!" Vic shouted at the younger mans back.
"Don't worry, I'll save one or two for you!"
Kai winked at him before sprinting even further into the building. 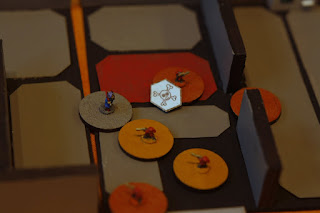 Crossing into the open space, Kai sees a half-dozen mercs. Still confident, he smiles as he jumps, blades flashing at the closest foe.
The vibro-blade passes cleanly through the throat of the merc, his scarlet blood leaking onto the floor.
Quickly raising his rifle, the next soldier just managed to block the blow as Kai's blade came slicing at him. 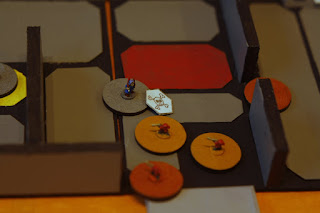 With his momentum halted, Kai was in a bad spot. At point blank range, several of his enemies open fire.

His armor manages to absorb some of the blows, but it eventually fails as the weight of fire slams into him again and again. Kai goes down, his fate unclear.. 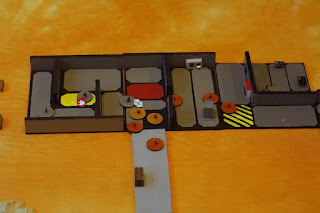 With shots still ringing out, Vic and CC make it into the building. Stopping to catch their breath, they realize that something's gone wrong when Kai doesn't reply. 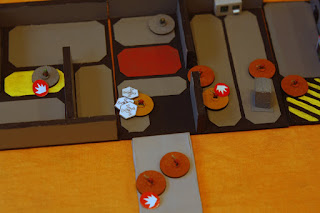 Throwing himself into the room, Vic realized what had happened. As he sailed through the air, his shotgun barked out several rounds.
The entire space was filled with fragments as the blasts strip paint and interiors from the falls. One of the mercs manage to make it out of the room by the skin of his teeth, but his friend is less lucky. Standing over Kai's unconsious body, he took the brunt of the blast, leaving him a tattered mess, barely recognizable as human.
Kai was spared any further injury thanks to being on the floor. 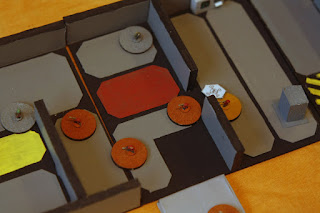 Just when the pandemonium of Vic's shots are dying out, CC steps around the corner and open fire as well. Her shot flies true, hitting a mercenary standing in the open doorway center mass.
He crumples to the floor, the light going out of his eyes before he hits the ground.

Losing yet another of their number, coupled with the messy death right infront of them is too much.
"We're not payed enough for this. Sir I wish to surrender!" One of the mercs drops his gun, and the rest follow suit. 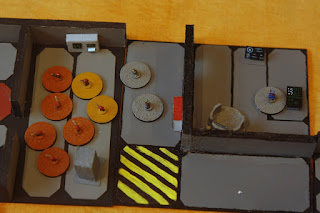 Vic keeps an eye on the disarmed mercs as CC rushes forward to check on Kai.
"Is he ok?" Vic looks over.
"Yes, just took a nap boss."Kai replies. He starts to laugh, but winces as the pain comes back with a vengance.
"I need you to get all the data off the facility mainframe, can you do that?"
"Sure thing boss." Kai limps over to the console and starts the data extraction.
As soon as the data is transfered, the group turned to their captives. "You are free to go as soon as we've left the facility. Can't give you any of the data, professional reputation and all that."
"You'll just let us go, just like that?" They look at their captors suspiciously.
"As long as you don't come after us, sure." Vic smiles his best shark-like smile as they begin to walk out of the building.
"Are you sure about this Vic, just letting them go like that?" CC looked over at him with a worried look on her face.
"Have a little faith girl, I tagged both them and the mainframe with a bug, we'll know if they come after us" Kai said to CC and winked impishly.

When they got back to the hotel, Vic called Mr Guntz on a secure line.
"We have the data, transfering it now."
"A pleasure doing business with you Mr Vic. One last thing, did you look at any of the data?"
"No, should I have?" Vic responded, somewhat taken aback by the question.
"Of course not, forgive me. Goodbye Mr Vic."
The line cut.

Soon thereafter the 10.000 credits showed up on the credstick Vic had linked to his account.
They were rolling in it, for now at least.

He was interrupted from his thought when Kai called out for him: "Hey boss, can you get in here?"
When he entered the small room Kai had claimed, he saw a wealth of data rolling across the monitors. "What's all this data Kai?"
"It's a copy of the Rakuen mainframe. The Merc just tripped my alarms. They seem to be using the master password to wipe all the data."
"They weren't after the information?" Vic's brow furrowed.
"Seems unlikely, that master password isn't anything that is left lying around. Someone gave it to them, or they have a good tech with them. Anyway, that's not the most interesting part."
"What is?"
"The data they wanted to delete first. It's a record of a Rakuen facility on Thylla I, involved in something called Project BW."
"What is that?"
"No idea, but they sure don't want anyone to find out.."
"That's why they asked if we had looked at the data!" Vic cursed under his breath. "We need to pack it up, get to the spaceport and off world double-quick."
"CC, you grab the arms and armor. Kai, Stow your kit. They could be coming for us any minute!" 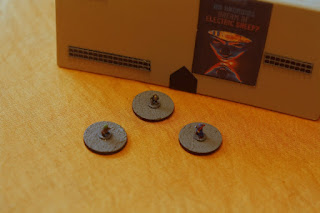 He'd been right. A few minutes after they left the hotel, a big explosion and gunfire could be heard behind them, as they moved through the back-alleys and side streets to avoid any possible patrols.

They arrived at the spaceport eventually, seemingly in the clear.
Catching their breath, the trio entered the 'port.

"So where are we headed boss, other than away from here?"
"Thylla I." Vic said solemnly.
"Is that really so smart?" CC looked at her companion and saviour. "You know I'll follow you anywhere, but that's asking for trouble."
"Yep, it is. But this thing stinks of big Corp involvment, and these people tried to kill us, so there's that. We're going." Vic walked up to the ticket vendor to book passage on the first shuttle out.
"Well, this will be interesting." Kai mused, dodging a shoulder-punch thrown by CC.

"Let's go, we have a mystery to solve" Vic returned with 3 tickets and a fire in his eyes.

What are Rakuen up to? Who where the mercenaries? What is project BW, and why are the people behind it willing to kill to keep it a secret?

Log on next time to find adventure, some answers and more questions!

Posted by Alexander Wasberg at 08:05