Invaders on the horizon; A set of Horizon Wars AARs


While making a few pieces in preparation for the next episode of  Starport Scum, I decided to try one of the scenarios from the book to play a game of Horizon Wars. It ended up being one scenario and one straight up battle, since the scenario was finished by turn 2.

The scenario; Deliberate attack, 12 Presence per side. 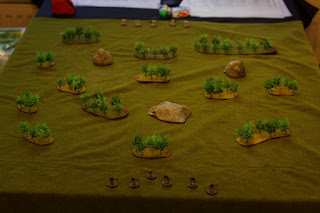 The SADU had picked up a presence of the invaders on a frontier world,  and sent out a small unit to defend against the invading force. The Invaders wanted to hit hard and fast to establish a beachhead for furthering their incursion. 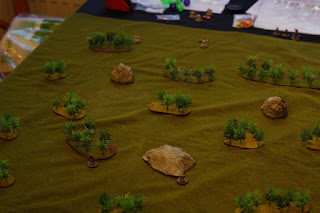 Only two mechs had made it to the battlefield in time, the rest were kept in reserve. 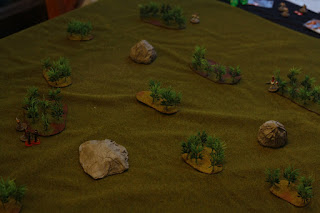 The invading CHQ open up with it's shoulder cannons. The shots rip through the the foliage and set fire to the brush before crashing into the Turtle mech, knocking off some armor and damaging the targeting systems. 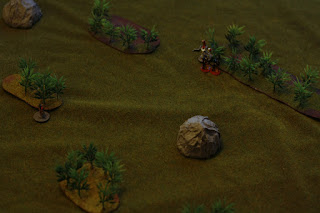 The defender moves up to retaliate, it's micro-missiles exploding all over the CHQ. Armor shards fly and the legs of the mech is damaged as well! 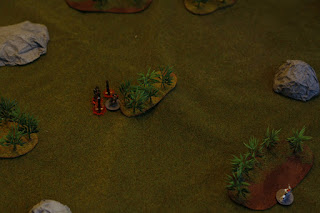 Capitalizing on the exposed mech. High velocity slugs shred trees,dirt and mech alike. Hitting something vital, an acrid puff of smoke announces the end of the mechs involvement in the engagement. 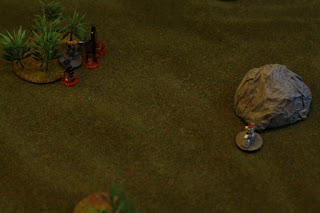 Start of the 2nd turn. After a near miss from the SADU CHQ, the Invader line mech swing around to fire on the enemy. A lucky burst makes it through the vital armor covering the powerplant, killing the mech and it crashes down, lifeless. 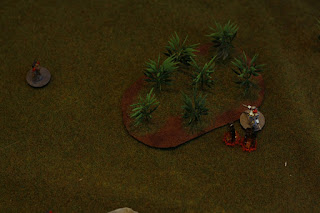 Reinforcements from both sides arrive, but the defenders are essentially overrun at this point. They make a valiant attempt, damaging movement and firepower of a Invader mech, but fails to bring it down. 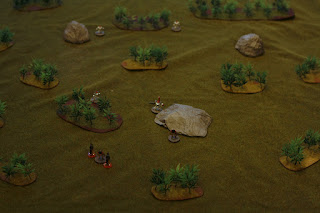 By the end of the 2nd turn, only two SADU defenders are effective and on the field. The Invaders have successfully overrun their defences, and win the battle!

As this was so quick (over in about 20 minutes) I set up a second game, pitting the Invaders full 12 points against the full SADU contingent: 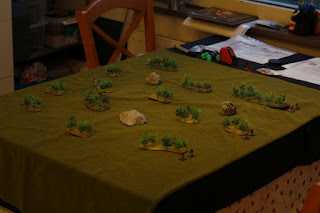 Setting up along the other edges, Invaders took the initiative and was soon attacking the defenders. 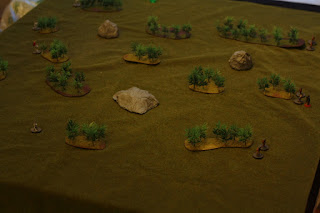 At what might be a bit long range, the Invader heavy hits the leg of the Beetle CHQ. 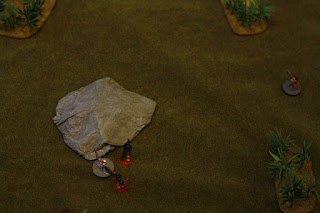 Having sought cover behind a rock prooved rather pointless, as a Turtle speed up and fire on the heavy, sending shards of armor flying. 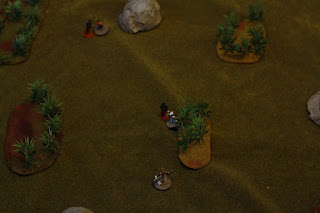 On the left flank an assault mech and a SADU mech trade blows, causing minor damage to eachother. 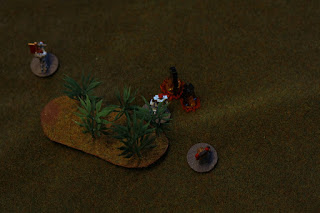 It doesn't take long before another Turtle mech closes in on the assault mech and blow more armor and pieces off it.. 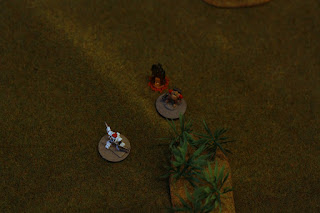 ..The assault mech's flamer belches in return, melting steel and warping supports on the defenders mech. 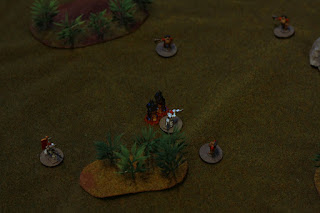 Even more defenders swarm in to attack the already damaged assault mech, further injuring it. 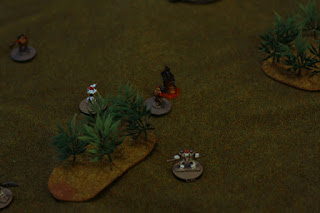 Moving up behind some of the new arrivals, a burst of hyper-velocity slugs shred layers of armor and synthtetic muscle. 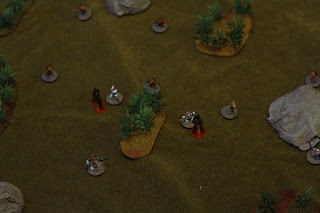 The Beetle react and move up, shooting at the Invader. 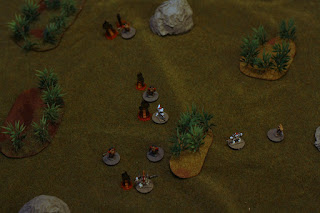 The CHQ open up with both shoulder cannons and plasma gun, blowing up a Turtle and damaging another as armor runs in rivulets, starting small fires in grass. Return fire hit him, but he keeps firing. 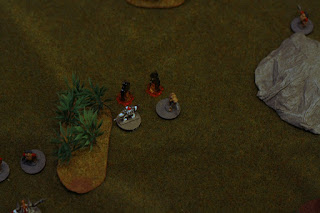 With heavy damage and barely functional, the Beetle CHQ charges into the closest Invader. Tortured shrieks drown out the noise of warning klaxons and gunfire. Both mechs are still standing if just barely. 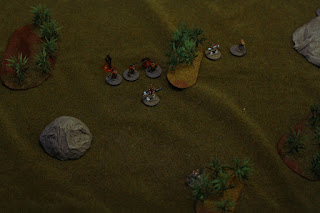 Start of the 3rd turn, The heavy Invader opens fire on the line of Turtle mechs infront of the CHQ. The first blast of the fusion cannon cooks through the power plant of a defending mech and shearing armor of the legs and scrambling the computers of another. 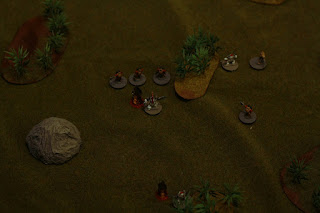 The SADU's revenge is swift and brutal, the Invaders CHQ is trashed as the combined maelstrom of fire eats through him. 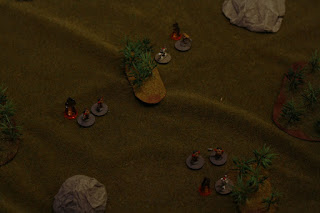 The last effective Invader fires his fusion cannon and blow up another SADU mech! But in a stroke of luck, the Invader heavy is brought crashing down as a lucky critical hit knocks the last armor off the frame before he can bring his guns to bear again.


This second game was a close one, most of the mechs were severly damaged, and a smattering of criticals at the start of the 3rd round decided the game.

Next time I'll hope to have another AAR and possibly the next episode of Starport Scum!

Posted by Alexander Wasberg at 05:32