A shipload of goons and a few more pieces of terrain

With the summer holliday here, and the inspiration of tales of Rhoro Tharik (which can be found here), I've painted up a few more goons and finished up some more terrain pieces for my own upcoming Starport Scum scenarios. 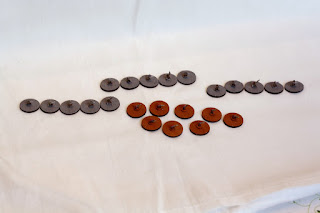 A whole bunch of goons. 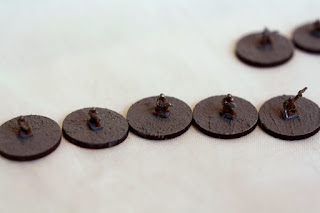 With human space being as wast as it is and realities of interstellar transport, more than a few of these men and women once belonged to Unity armed forces or were security personel from the core worlds. Due to choice or chance, they got stranded in the fringe. Forced to make ends meet, many end up as guards, local militia or little more than hired thugs working for one crime-boss or another.
A few even stay with their own units, forming some of the numerous private security firms or in darker cases, roving bands of desperate men, perpetrating unspeakable acts. 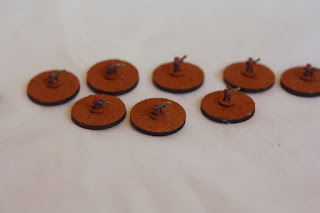 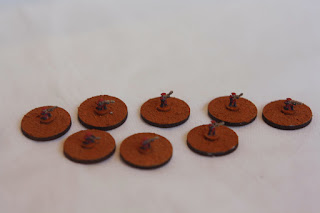 These troopers I painted up to fill the role of professional mercenaries. Many corporations prefer to bring their own security on their excursions to the fringe, but it's not unheard of for them to have mercs in their employ as well, especially in unstable regions. The hired help costs only a fraction of what the internal security does in case of horrible death and/or mutilation, due to contractual obligations. 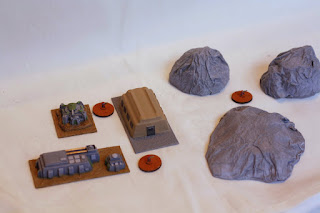 I have too little in the ways of terrain for more rural areas, as well as for my station and spaceship tiles. But I had to start somewhere, so first I made a few more rocks and a few stand-alone buildings. 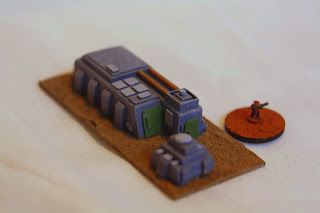 A military command post or similar civilian structure, with a small outbuilding on the outskirts. Could be anything from a foremans office in a mine or some such industry, to a colony admin building for a small settlement.  The structure is from Sayiner micro toys. 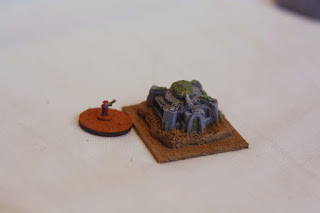 A small bunker. A structure of obvious usefullness on the fringe of human space, where there might be local wildlife to keep in line, or some ne'er-do-wells looking to take what's yours. Also from Sayiner micro toys. 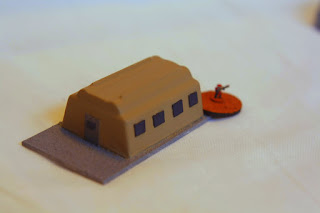 The last building is a all-purpose pre-fab. Storage, living quarters or improvised work area, these versatile structures comes in a range of sizes and shapes, manufactured locally to keep costs down. Virtually all of them are made from standard templates aquired from core-world mega corps like Sanada Corp or Union. This one I cast in plaster, using some plastic packaging for a mould. 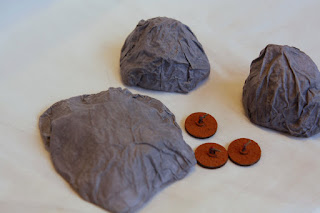 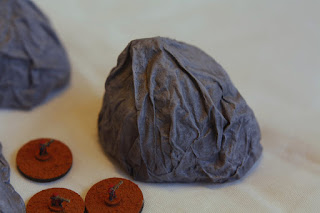 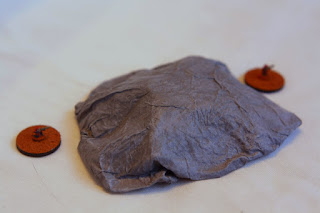 Rocks like these are one of the easier and more versatile pieces of natural terrain you can make, and they work well for my Horizon Wars game as well, being able to hide a mech is a big plus in my book! The two in the background are made from a plastic half-sphere covered in paper towels soaked in a pva-water mix. The bigger one in the last pic have crumpled up newspaper for a core, with the same paper towels for cover as above. I might very well make some more, but I think I might try creating a few more bases of woods and then some furnishings for the spaceport and spaceship tiles.

I have a set of characters for my upcoming Starport Scum games ready, but I'll make a separate post, so I can keep that one updated as more characters appear as the story progresses.

I also have a new faction brewing for Horizon Wars, but more on that later!

Posted by Alexander Wasberg at 10:43