In tried and true fashion I've been working on a bit of everything over the last week or so, so today's post is a bit of this and a bit of that.

So let's get cracking, shall we?

I made these pieces hoping to get inspired to fix up the last few models I need to play some more Laserstorm, now that it's realeased. It sort of worked, but having read a Ogre/BOLO post too many, I'm now in the market for some BIG tanks for my 3mm forces. They may or may not be substituted with Titanic Mecha for the time being if I get too impatient however.. 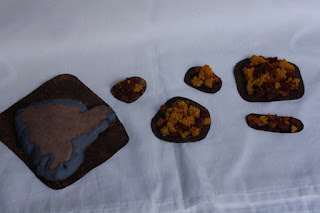 A good set, a few bases of woods or vegetation depending on the scale and a small rocky outcrop/hill. 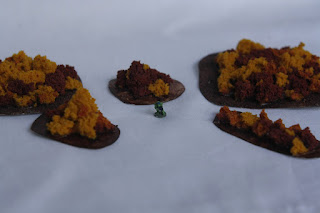 The vegetation with a 6mm Union trooper for scale, good for a small copse or a bush of some sort. 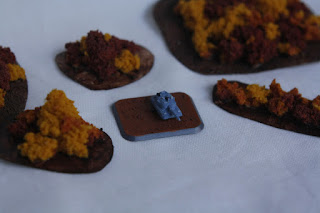 The same vegetation with a CSA Chevalier MBT. The bigger one will make good forests at this scale. 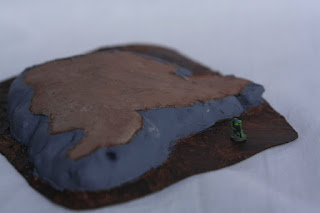 The hill/rock with the 6mm trooper. Big enough for good cover and also blocs LOS! 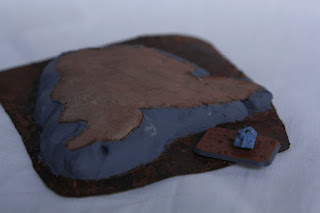 Like with the 6mm, the 3mm units will most likely find this piece usefull as well. 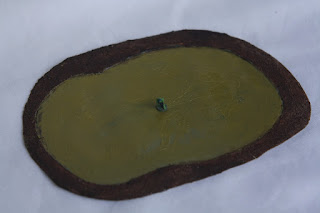 A pond I originally made for T77/4, But since I didn't finish it in time for the game it'll be featured later. Could be poisonous, so don't drink it, ok? 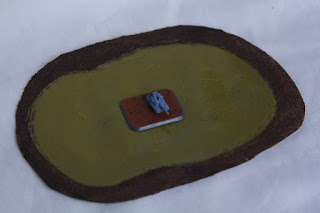 The very same pond, with the 3mm tank for scale. It seems like I might be able to use this here as well.

I've been wanting a couple of things for my bigger engagements, particularly infrastructure to fight over, like bridges,powerplants and so on. A refinery of some precious mineral or handwaveium raw material was always looming in the back of my mind, so the other day I started to make one and this is what I came up with: 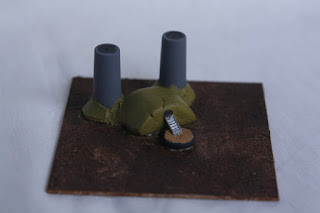 Front of the refinery/processing plant. Can you guess where the inspiration came from? 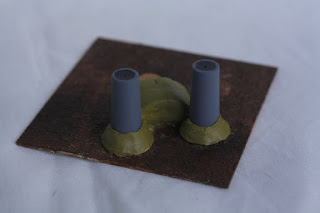 Back of the structure. 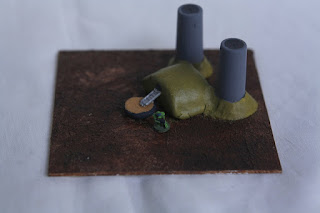 With the 6mm trooper for scale. It might work for 6mm too.. 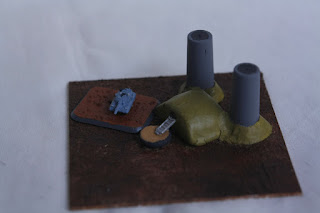 ..And with the 3mm tank, at it's intended scale. I wish I made it a tiny bit bigger, but it'll fit in with the rest of my terrain I feel.

For the next episode of the Saga of Clarke I needed to make some ruins, since I had none, human or otherwise. These Alien ruins were made with air-drying clay, to give them a softer, more irregular edge. 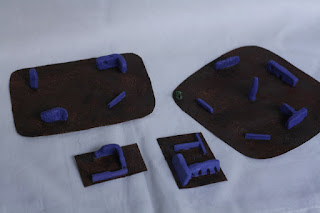 The group shot of the various bases of ruins.
I thought that the 3mm models might have some use for these down the line as well, so I took a few scale pics for both 6mm and 3mm: 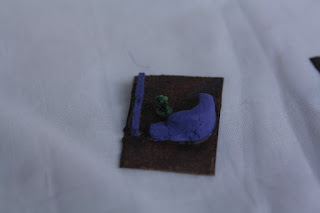 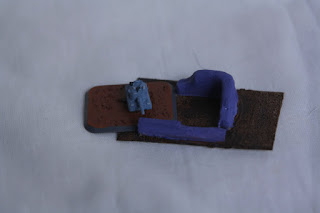 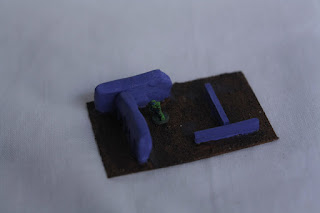 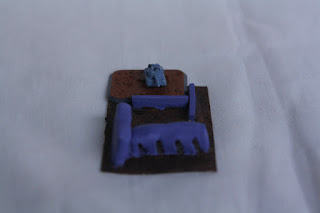 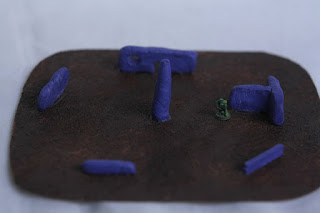 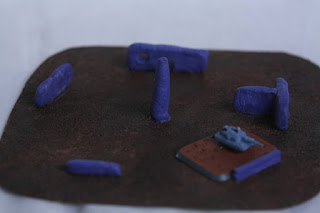 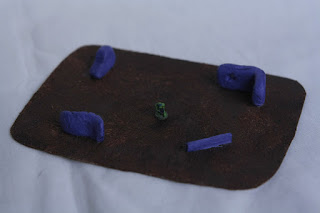 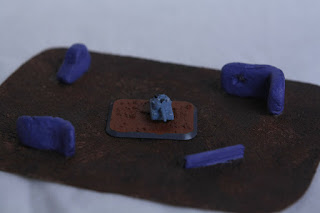 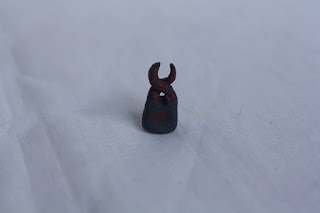 This strange standing stone is one of the many artefacts found in the ruins. Scans have been unable to penetrate the outer layer of the object, leading the scientists involved to speculate about it's mineral make up and origins. 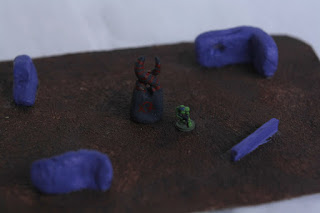 This picture was also in the same data file, a holo-pic of the trooper who found the artefact. According to an attached report, the private in question have since disappeared.. 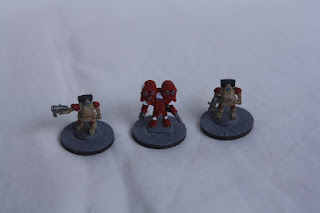 The new arrivals consist of two Turtle-class mechs, a mainstay of the NIJA's bipedal weapons, and a experimental combat unit known as O-Yoroi. 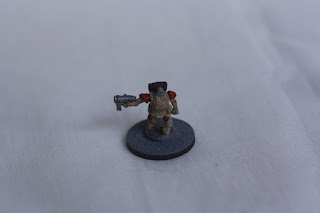 The Turtle-class mech, like the warrior, is a frontline mech, built for sturdiness and versatility rather than exellence. Standard loadout is a general purpose autocannon and a EW-suite tucked into the backpack unit. 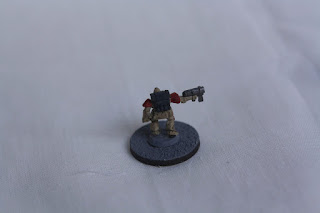 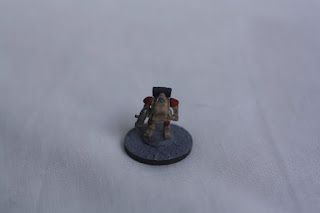 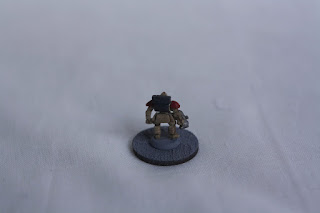 The O-yoroi is another of the Sanada Heavy Industies prototypes. While it's not a dedicated command mech, the O-yoroi is the defacto commander when deployed with it's Turtle-class escorts.
Armed with two high-velocity cannons and shoulder mounts for either plasma or rockets, the O-yoroi is the most heavily armed mech to date in the SADU. At the same time, it's one of the first units equipped with experimental armour plating designed to counter both kinetic, direct-energy and explosive weapons. How good it actually is in the field remains to be seen, but early tests have been promising.. 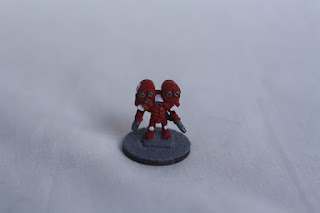 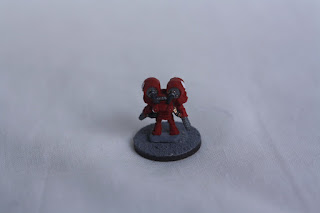 That's the mix of the week, next up I hope to have some pics from a recent game of mech dueling me and a friend played a few days ago and hopefully some more 3mm updates.

Til next time!
Posted by Alexander Wasberg at 11:28