Last week my friend Daniel came over for a game of mecha goodness.

We were both interested in a ruleset we'd been only partially exposed to: Heavy Gear Arena.

Set in the same world as it's big brother Heavy Gear Blitz, HGA is all about mecha duelling, not unlike a futuristic gladiator sport, with mechs of course!

Since I'm preparing a mech-centric game as soon as I finish up the current arc of the Saga of Clarke, I thought an alternative to CotF might be worth looking in to.


I only snapped a few shots owing to the fact that we had some great fun, but here they are: 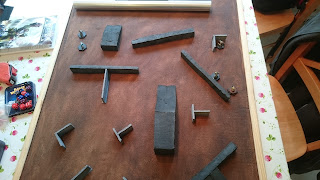 A part of my new board was cordoned off and some quickly assembled pieces added to make the arena. 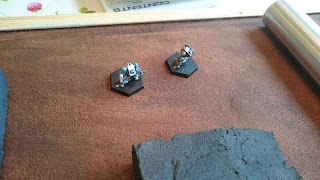 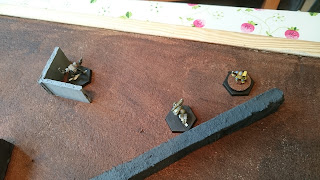 My own three, slightly less so.. Two of the mechs I borrowed, since my opponent had already painted up a few for the occasion. 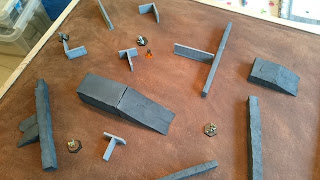 As soon as we spotted eachother rockets started flying left and right, but no damage was dealt until the the mech in the bottom right managed to blow some extra armour off of my opponents top right mech with it's grenade launcher. 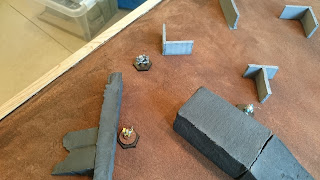 At this point we realized that Daniel had armoured his mechs a little too well, since we couldn't seem to damage them. I began to worry about the immediate future for my mechs.. 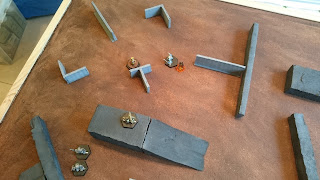 Taking to high ground I started lobbing grenades at him while my heaviest mech attacked up close.
At the same time I took my first real damage myself as the mech in the lower left corner preformed a close combat manouver! 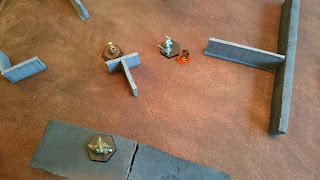 The distraction offered by the shelling allowed me to slip my mech up behind my opponents.. 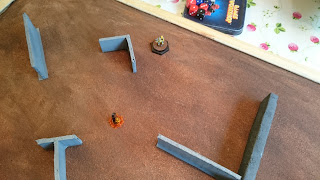 ..And perform a attack to his slightly less protected rear. It went up in a ball of flame, mostly thanks to my opponent having some bad luck with his dice! 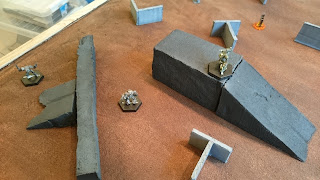 Since my grenadier still occupied the high ground, I got my other mech out of his way before trying another of the toys I'd equipped my mechs with: a heavy hand grenade. With a bit of luck, I hit my target square on and managed to destroy him outright by causing critical damage. Ouch!


The game was fun, but we did identify a couple of things that we'd probably make some house rules for in order to make it more playable. Amongst other things neither of us ever fired any of our projectile weapons since the rocket packs we had were far better and there was little chance of them running out of ammo. Explosive weapons are generally very good, a bit too much so we felt, so they will probably all run with limited ammo and be more rare than in the standard game. Armour levels will probably be kept intentionally slightly lower than the average is, just to make it fit the VOTOMS-style that we both love better.

We were looking to be able to play games much like battling from the VOTOMS series, and HGA was fast, furious and deadly. With the homebrew mods and addons, it might very well be what we were looking for.

I hope to have another episode of the Saga of Clarke done soon, as well as a trial game of CotF for my mechs and some more 3mm goodness.

Posted by Alexander Wasberg at 01:18