Last time on the Saga of Clarke:

Our heroes had just been brought before the captain of the guard to explain their part in the violence that erupted all around this sector of the city.
Through luck and some clever rethoric, Clarke managed to secure their release. They were now free to go after the Cormorant, docked at the single landing pad of the station.
Before long, Tai was busting skulls and Clarke lay down withering fire as returning nomads attempted to stop them from reaching the ship. At the same time, Unity guardsmen were hot on the tails of nomads and our heroes alike, barging in to arrest the lot for discharging firearms inside the station!

With Tai's help, Clarke and Tycho also made it onto the ship just before it was making it's escape!

No time was wasted turning off the engines to buy themselves some more time, but as Tai ran ahead to deal with a lone guard, he was set upon by a full combat team of nomad pirates.
The hail of gunfire brought the saurian down, but not before he could defeat his quarry. In the fight that followed Tycho fought like a man possessed, taking down half the combat team by himself, two of them in close combat! Clarke was almost atomized by a plasma blast, but managed to get to fight on.

After a quick fight with the commander, the Cormorant was theirs! Tai was quickly moved to a medical stasis pod and would soon recover.

A course was set for T77/4, stopping only long enough to resupply. They were getting close to their prize, Tai could feel it in his bones..


As it turned out, the general area that Tai managed to direct them to was quite a big spot to search.
Most of the surface of the planet was still undeveloped, even if limited terraforming had made it habitable, though not comfortable by any standards known to our heroes. 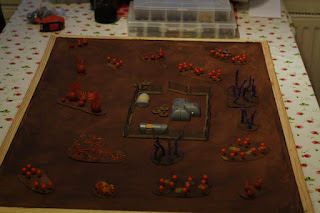 "You got us in real close, didn't you?" Tycho sneered at Tai, as they made their way through yet another thicket of thorny stalks.
"It's around here, I can feel it. But a planet is quite big Tycho, so a few miles off is quite close" Tai replied tersely.
After trekking through a mile or so of the strange vegetation of T77/4, Clarke thought he spotted something. "Quiet you too, there's something up ahead." He admonished.
Increasing his magnification, he could see a small outpost in the distance, surrounded by a fence.

"Men in green, not rangers, Unity has no presence on this world." he thought aloud. "Must be Union troops, but what are they doing here?" 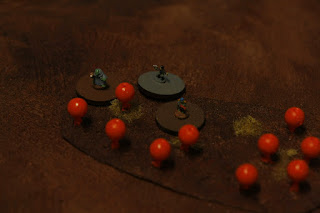 Darkness was quickly descending, as Clarke motioned the others into a copse of the strange fungi that seems to be everywhere on this planet.

"We wait for dark, then we move in silently, maybe we can find out something by going through their data banks." Clarke explained
"Alright with me boss, quiet as a mouse" Tycho whispered, grin spreading across his face. 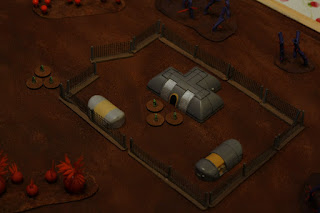 With little overhead light due to the lack of a moon, the night was pitch black, exept for the low illumination of glow-strips inside the small outpost.


Union patrols started moving out, checking the perimiter before closing the gate for the night. 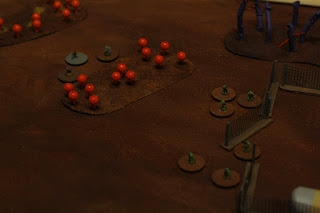 The trio started sneaking up, but remembered Clarke's stern warning to stay well clear of the patrols.
Hiding behind another patch of fungus, they looked on as the first and second patrol exited the compound.

Clarke was the first to move, his companions deferred to his greater experience at this sort of mission. 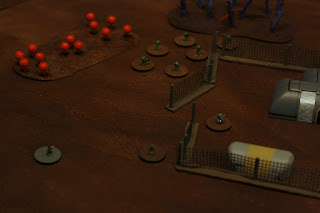 Tycho followed, but sneaking slowly as he was, he was in the open. "Get behind something" Clarke's voice came in sharp but hushed over the comms.
"I'll be fine boss, unless they've got eyes in the back of the neck" Tycho responded cooly, smile evident in his voice but invisible in the black of the night.

A shimmering of the air could be felt rather than seen, and the low swoosh of rushing air passed Clarke as Tai sped past, a little too loud for Clarke's taste, but patrolmen didn't seem to have noticed. 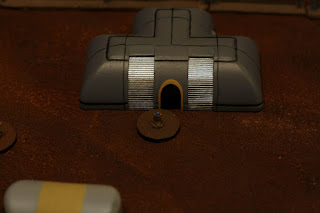 Within a few seconds Clarke had reached the main compound. He started to search for a network terminal.. 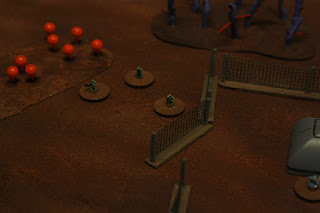 Meanwhile Tai snuck the last few yards into the building as well, starting his search in another wing of the building.

The first patrol kept going clockwise around the perimiter fence, but the second troop suddenly turned around, having heard the noice of Tai's passing!

Shining their gun-mounted lights around, they spotted Tycho in the open.. 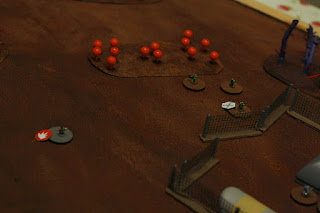 Muzzle-flashes lit the gloom, as the red tracers hurtled towards Tycho. Thanks to the darkness he suffered no critical injuries, but still had to duck and weave to avoid the incoming bullets.
Not before returning fire however.

Wether by luck or skill no one could tell, but one of his heavy slugs took down a Union trooper! 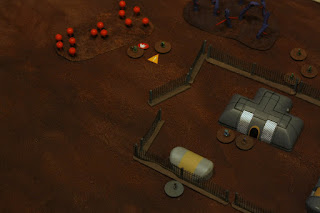 The sounds of the gunfire reached Clarke as he was just breaching a data terminal. He sighed as he admonished himself for thinking they would get through their little mission without any gunplay.
It didn't take long for him to find the data he was after, the location of some pre-settlement ruins.
Tycho was at the same time delivering some parting shots as he made his way to the relative safety behind one of the outpost's buildings. 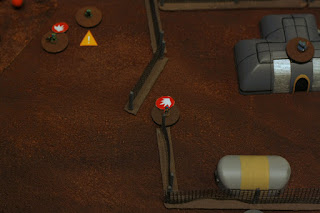 Clarke thought to exploit the opening as only one trooper was in a position to return fire. It turned out that one man was enough, his precise bursts forcing the bounty hunter back. 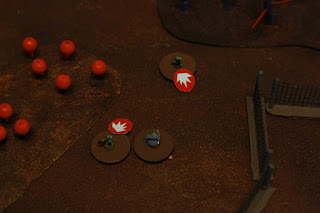 The now familiar rush of hot air that followed Tai's mystic powers could be felt as the psion loped past.
He ignored the trooper seeking cover, going directly for the alert one. His speed was so great that the trooper didn't manage to re-train his sight on the saurian before he was too close.
The Union trooper tried a clumsy strike with the butt of his rifle which Tai easily dodged, before striking hard enough to daze and knock back his foe. 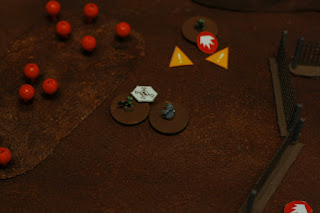 Turning his attention to the next enemy, Tai swung his staff in a vicious arc.

The weapon went right through the troopers weapon, atomizing it as well as a big chunk of the armor and the flesh of the man himself. 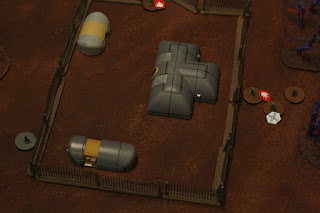 Tycho snuck along the fence, keeping low. He suddenly saw the movement of the second patrol on the other side of the outpost! Shooting at the barely visible shapes, he takes one down and forces another into cover behind the main building. 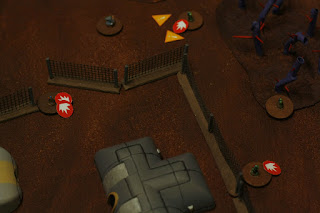 The remaining able trooper of the 2nd patrol darts in among the spiked stalks, but is carefull enough not to hurt himself. He squeezed off a burst towards movement by the gate, knowing that his allies were all elsewhere. Clarke is knocked flat by the hammering impacts on his armour, but recieves no lasting injuries. 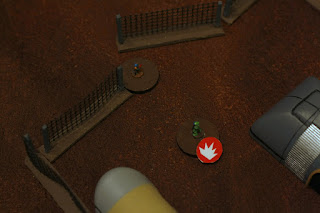 The commotion have finally brought the last Union patrol out of their billet and onto the battlefield! A big trooper sees the sprawled-out Clarke trying to get up and rushes in to finish the job.
He's bitten of more than he can handle this time tough, the trooper gets a few blows in, but Clarke quickly counters with his enhanced strikes. The trooper is knocked down, bruised and disorientated. 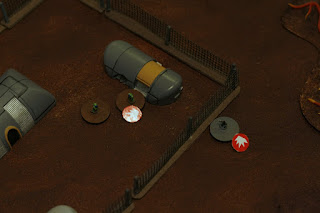 As his friends appear Tycho snaps off a few shots at the new arrivals, making one of them throw himself to the ground.

The instant assault doesn't deterr them however, and they give as good as they get, Tycho has to drop to seek cover by the earthen berm the fence is mounted on. 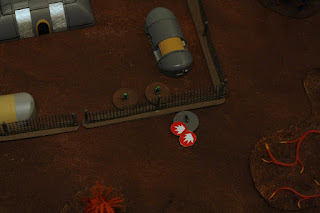 The assault rifles keep pouring fire on the smuggler, breaking links in the fence and moving dirt around.
Tycho isn't exactly safe, but at least unharmed by the attacks. 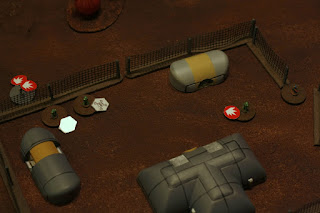 Having seen the trouble Tycho got himself into, Clarke charges up his brand new plasma rifle. The blue ball of incandescent fury hits the first Union trooper, consuming him completely. Residual plasma spills onto the second trooper, his screams a high wail as it eats through armour and flesh with ease. 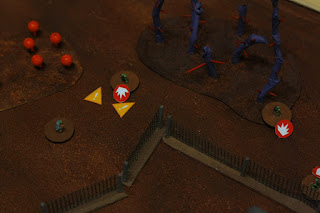 A gut-wrenching terror makes the last trooper outside the outpost drop to his knees, clawing at the clasps of his helmet as Tai's powers assault his mind.

Tai takes this opportunity to join Clarke and Tycho.. 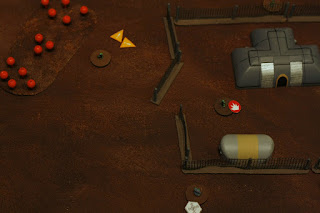 ..But as he runs towards his companions, one of the troopers gets back up, firing on the fleeing saurian.

His thick skin and the stims given to him by Clarke saves his life, but just barely. He collapses, clearly out of the fight. 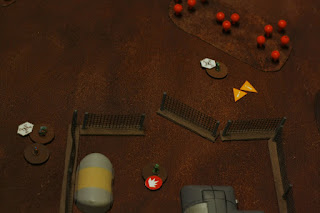 Turning towards Tai as he falls, Clarke is moving to his side before he's consciously aware of it. stepping past the fallen form of his ally, he loosens a bolt of molten plasma, vapourising the offending trooper.
"Are you alive Tai" he asks as soon as he made sure they are out of immediate danger.
"I'll live, thank you Mr Clarke" the saurian managed as he struggled to his feet.
Clarke grabbed his ally, supporting him as they both stumbled along. 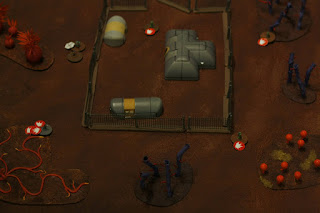 Tycho tried to make way for his companions by supressing the last few enemies. Unfortunately he stepped in among some fire vines, and as his enemy return fire the flammable oil from the plant catches fire!
Tycho manages to supress his opponent before diving out of the way of the flames. 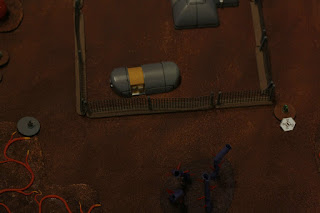 Clarke and Tai slowly make their way past Tycho, who brush himself off and get back on his feet.
"Had a lie down, did we?" Clarke asked jokingly as they hobbled towards the edge of the area.
"Just wanted to give you a chance to catch up thats all" the smuggler shot back.
Tycho takes aim at the cowering Union soldier, blowing him away before turning to follow his companions. 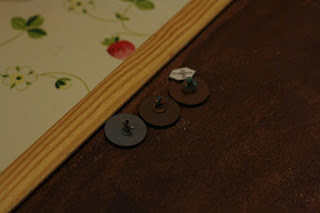 The smuggler quickly caught up to his allies.
"We'll take the long way around, to throw off any pursuers" Clarke declared.
"We have a long way to go then, let's get going boss" answered Tycho. 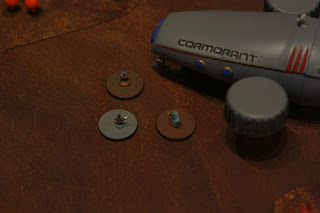 Later at the Cormorant:
"We got the most likely location from the data banks. Little more than two klicks from here, we have what looks like alien ruins" Clarke showed the data he lifted from the Union data banks to his allies.
"That looks like the structures I saw in my trances!" Tai exclaimed.
"How do we proceed boss?" Tycho asked after looking over the data.

"We'll land closer to the ruins, right here" the bounty hunter pointed out a location a few hundred yards from the ruins. "The ship's sensors should be able to pick up a better location when we land. Then we grab the artefact, and get out." He added.

"Why not destroy it on location?" Tai asked, looking worried.
"We might be able to, using a plasma charge.." Clarke started. "If not, we chuck it into the fusion engine of the ship when we are out of the atmosphere."

Their plan made, the crew started making their final preparations.

What is the artefact? Will they be able to stop the plans of the sinister Blood Cult before it's too late?

Tune in next time to find out!

Posted by Alexander Wasberg at 05:10