Two knights in the woods


By now the rumors were common knowledge; The lands of Tanis had been struck by calamity. Monsters existed everwhere, sure, but whole villages had disappeared and even the king's roads were no longer safe for travellers.

Many adventurers answered the call for aid, some out of the goodness of their hearts, but most for fortune and glory. 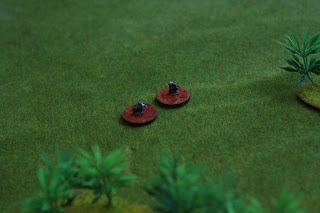 Brother Nicholas was one of them, a warrior priest from the order of the dragon knights. On his right side was his companion and bodyguard, Roke.
They had travelled along the king's road for most of the journey from the north, but as they neared the borders of Tanis the pair chose to go along the woodland paths, hoping to avoid brigands and possibly worse. 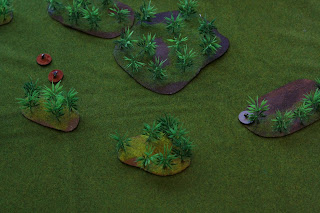 "Stop, look ahead Roke!" the priest said quitely, pointing at a small copse of trees just up ahead.

The young knight stopped and peered into the gloom created by the canopy. What was he on about?

There! Something was moving amogst the trees! 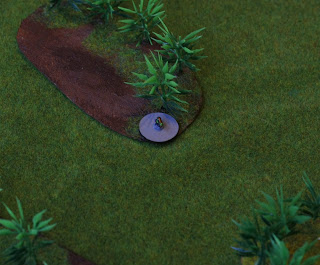 The small robed figure was a goblin, smallest of the goblinoids, a race of cunning but savage creatures.
"I see it Nicholas. A lone sentry perhaps?" Roke offered his companion.

"It's possible, but be wary; goblins seldom come alone." He replied.

Readying his spear, Roke charged at the creature! 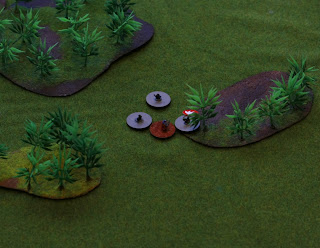 Caught somewhat unaware, the goblin squeals as he notices the armored form of Roke charging at him.
The spear-thrust is barely deflected by his knife, drawing some blood from the creature.

Leaves rustle and the rattling of weapons can be heard as two more goblins charge at the knight.

This is what I feared, Nicholas thought as he started towards the meleé. 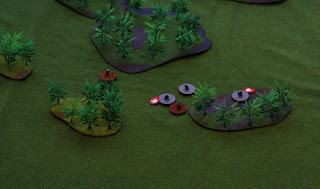 Suddenly facing two more goblins, Roke turns to attack the new threat. He feels the fury of his dragon god fill him as the priest weaves a spell, his spear sweeps across the new attackers, driving them back and wounding one of them.

In the confusion the goblin sentry sneaks back, firing his bow into the fight. Lucky for our heroes, he misses completely. 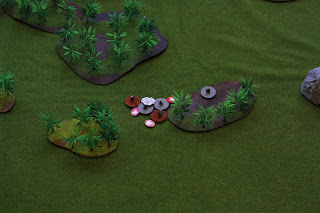 The closest goblin keeps the pressure on Roke, inflicting small cuts and denting his armor.

Coming to his companions rescue, Nicholas swings his hammer in a mighty arc and is rewarded with a sickening crunch as the goblin's skull shatters!

With one foe down, Roke spins around and uses his spear to knock down the second one, while dodging arrows from the sentry. 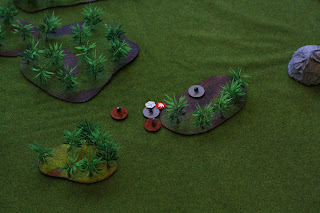 With the closest goblin bowled over, it's easy enough for the knight to dispatch him. He puts up a fight, but eventually a thrust from the spear hits the mark.

With all it's allies dead or dying, the sentry decides that it's time to leave. 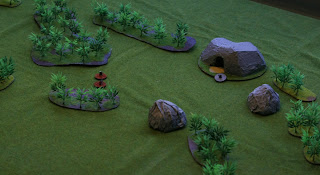 The small robed form sprints much quicker than the heroes can manage, encumbered by armor and gear as they are.

Soon they find themselves in a large open space in front of a cave. The goblin stands outside yelling into the cave, a toothy smile forming as he sees the dragon knights catch up.

A deep roar is heard coming from the cave. The gobling squaks and runs inside as a towering form steps out of the shadows: It's an Ogre! 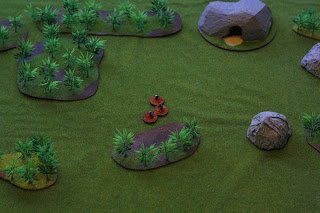 "Well, at least it's better than a cave full of goblins." the priest says to his companion.

"How so, an Ogre is much worse!" Roke protests

"Maybe, but at least there is only one to worry about!" Nicholas then mutters a quick prayer, and they get ready to fight as the Ogre charges right at them! 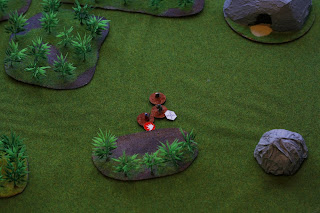 The monster crashes into their midst, swinging a big rock it picked up as it started it's charge.

They both duck and weave, trying to stay out of the murderous arc of it's swings. Roke is barely grazed by a pass, but is knocked to the ground by the sheer force of the blow.

With it's back turned, Nicholas brings the hammer down on the Ogres back and the creature howls in pain! 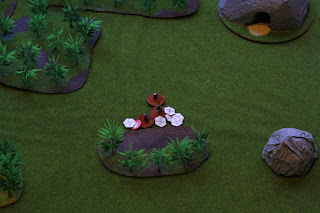 Sensing that Roke is the easiest target, the monster keeps bashing at him with the rock, narrowly missing the knight as he tries to dodge out of it's way. Eventually The ogre manages to land a blow, downing Roke.

Seeing his friend fall, righteous fury fills the priest. His form glows with the favor of his god, as he delivers blow after blow onto the foul monster. Bones shattered and blood spurting, the beast falls down dead.

Rushing to his companion's side, Nicholas is already imploring his god to grant him the power to save his friend, before he slips into to the next world. Roke is made of stern stuff as it turns out, and with the healing power of his god to augment his own body's he makes it back from the brink. 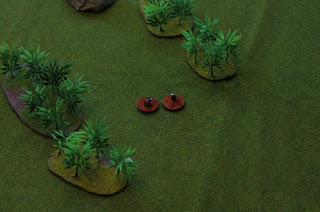 After a few hours of rest and having repaired the worst damage to his armor, the pair is ready to continue.
"Not bad, having slain an Ogre before we even get two steps into Tanis." Roke is in a good mood, having survived a potentially fatal ordeal.
"Yes, quite. But I can't help but wonder what other horrors lay ahead, if that is what greets us at the threshold." Nicholas is thankful that his companion pulled through and in such good spirit too, but being older (and hopefully wiser) he worries what will come down the road.

Not long after, they enter the plains of central Tanis, seat of the guild of the hunters and the city of Tanis. Their destination.

The guild lay outside the city proper, but a small community has grown up around it, providing services for the mighty warriors and mystics that answered the call for aid.

This is were their adventure will really start.


I plan to run small introductions to the rest of the party members in a similar fasion, with the whole group forming as they arrive at the guild.

Posted by Alexander Wasberg at 02:08