The closest settlement to the edge of the desert, New Thebes  . It started out as a small outpost for the peacekeepers, the mercenary company contracted to uphold the local laws and handle any disputes that occur. A small town soon sprung up around the base, traders and workers as well as the local watering hole, Krangs bar. 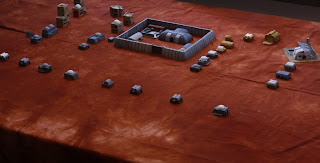 This is where we find Pax. 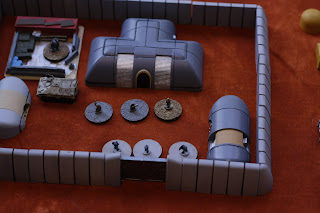 The base courtyard is quite crowded, even if there is only the six of them along with the apc and Pax's suit.
The deserters are led off into one of the small structures under the guns of the peacekeepers.

"Let's go sergeant, we are taking you to the magistrate."

"Let's go then, get this over with." Pax replied. 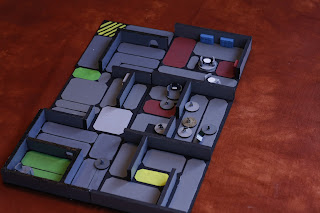 Inside the big structure is the main offices and barracks for the stationed troops.
Pax looks around as they walk through the corridors and rooms, before stopping at a desk into what he can only guess is the magistrates office.
A captain stands guard at the door. "Is this the one?" he asks the peacekeeper escorting Korbin.
"Yes, captain."
"Good, bring him in, the magistrate is waiting." 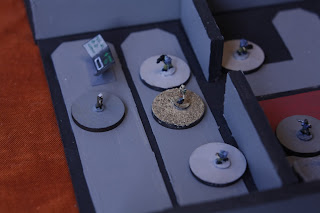 Korbin is led into the room by two of his escorts, who keep their weapons trained on him.
A older man stands before him.
"Sergeant, I'd like to hear your explanation for operating a restricted weapon system in a off-limits zone."
Pax takes a deep breath, makes his case and tells the story of the attack on his company, being knocked out and wandering through the desert before coming upon the deserters and being found by the patrol.
"I am sorry for your loss, mr Korbin, but you now have a problem. No, not the dererters, we would have delt with them much the same way as you. The HARD suit, now that is only allowed to stay in your possession if you are a registered mercenary and with the dissolution of the Corvi Headhunters, you no longer are."

The magistrate pauses for a bit before continuing: "However, we find ourselves with an opportunity, if you are so inclined." Pax nods for him to continue. "We recently lost a member on patrol, he was taken by the same deserters as you encountered. If you could help us rescue him, we would be inclined to offer you a freelancer charter."

With other options thin on the ground, Pax accepted.

With the Mk III seriously in need of an overhaul, Pax decides to leave the armor in the Peacekeeper's base, stopping only to grab his beam pistol. Along with the three mercs that had brought him there, Korbin gets into the apc and they are on their way to the deserter camp. 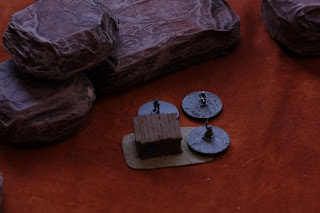 A bumpy ride later, the team arrives outside the rocky hills where the other merc is being held.
It's a good defensive position, high rock-faces on all sides exept for a small opening and that has been reinforced with some rockcrete barriers.

The deserters clearly outnumber the party from earlier reports, something that is quickly confirmed to still be true, as the captain of the Peacekeepers survey the area with a spy drone. 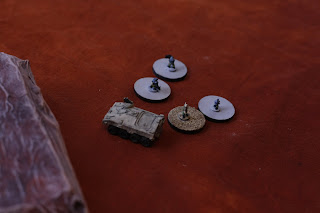 "There's our man." a thin smile disappear as fast as it came, when he sees that they are still outnumbered. "I hope you have a better idea than frontal assault.." Pax was starting to feel less sure this was a good idea.
"They haven't noticed our precence yet, we sneak up, take out the guards at the entrance. Then we get the ones around those buildings with these." he opens a small crate that they brought, labled "Explosives": inside is a dozen grenades. Everybody grabs a few each, and get ready for action. 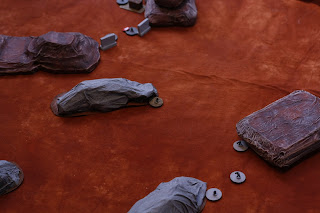 Sneaking forward, Pax soon takes the lead. The deserters doesn't seem to notice any of them as they get into position..

A brilliant beam of light shoots out of the shadows, narrowly missing the guard on the right.

It's close enough to set fire to his sleeve however, sending him rolling on the ground, both to avoid the next shot as well as to put out the fire! 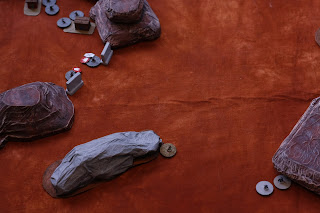 His shot acting like a cue for the rest of the team, the Peacekeepers now open up as well.

Knowing that they have been discovered, the mercs release a torrent of full auto fire against the gate guards, sending the heavy weapon guard on the left into cover. His rolling friend is less lucky, taking several hits before stopping completely.
"That will do it, corporal. Get the apc before the rest of the enemy come up to reinforce!"
His subordinate took off in a run after a prefunctory salute. 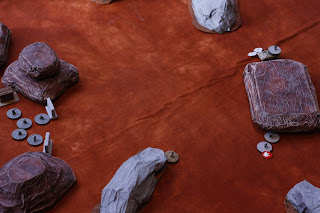 The gate was soon swarming with the deserter soldiers, laying down a fearsome barrage of fire in all directions. The captain is knocked over then a bullet slams off his armor, but is mostly unharmed.
This assault gives the plasma gunner at the gate time to line up a shot at the apc as it swings around the big rock, the ball of incandescent fury slams into the vehicle, boiling off armor before dissipating. 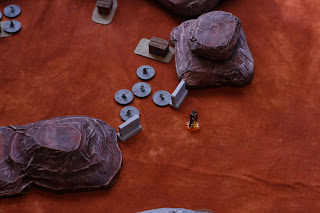 Reeling under the fury of the attack, Pax and the other mercs doesn't manage to hit any of the new arrivals. Even the corporal seems to have a hard time with the heavy machinegun, blasting rock and dirt but little else.

Pax attempts to throw one of the grenades, but it bounces off the protective wall and explodes harmlessly a dozen meters from his intended target.. 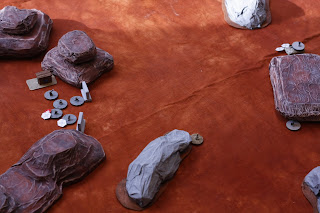 Having finally zeroed in on the gate proper and it's defenders, the apc's gun starts reaping a bloody harvest, downing both the plasma gunner that injured it as well as the man next to him.

A lucky pistol shot from one of the deserter leaders manage to strike the Peacekeeper captain between two armor plates, throwing him bleeding and cursing to the ground.

The man next to him administer first aid, stabilizing the captain, but he is out of the fight for now. 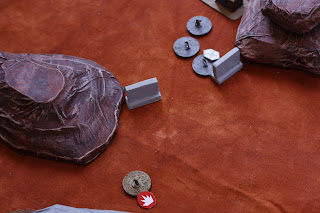 At the same time, Pax charges forward to capitalize on the disruption in the enemy defences.
His beam finds it's mark this time, burning straight through the deserter it hits, dropping him like a bag of rocks.
His headlong charge allows for the accurate leader the brought down the captain to wing him as well, but Pax still manages to reach the cover of the rockcrete barrier! 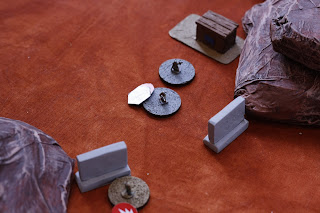 With all visible targets down, the apc grinds to a halt, as the captain orders the corporal to go in on foot to avoid killing their man with fire from the heavy mounted gun.

Meanwhile the second merc come up from behind in support of Korbin, allowing the latter to dispatch another deserter with a searing shot. 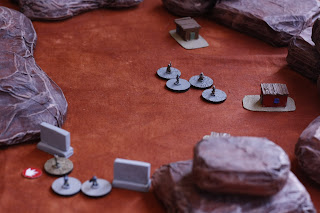 With all his underlings dead, the deserter's leader scrabble for the captive, draging him out along with the two men set to guard him.
"That's far enough! If you want your man alive, you will let us through. When we are safely away, we will let him go!" The leader yells, the tension in his voice evident. "Do you think you can make the shot?" Pax whispered to the Peacekeepers. "Take the shot!" came the captains voice from behind them, still powerful even with the blood-loss. 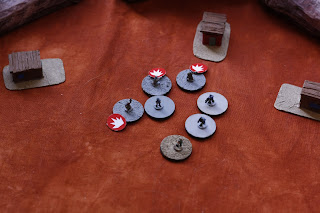 "Silence you fool!" Cried the leader in response. "We'll kill him!" He was about to snap.

With an almost impreceptible nod Pax signaled the other two.
As one, they all raised their guns and fired.

All three deserters fell, wounded but very much alive. The trio dashed forward, finishing the job before the wounded men could try to carry out their threat. 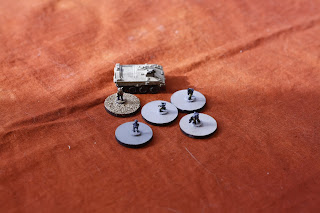 The battered and bruised captive, along with the wounded captain, where helped into the waiting vehicle. "Fine job mr Korbin, I'm glad we had you along for the ride." The captain smiled before a cough sent him into a fresh wave of agony. 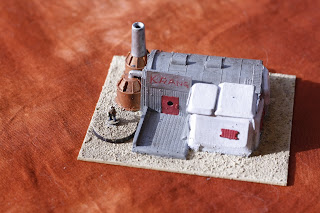 A few hours later, after getting back to New Thebes, the Peacekeepers upheld their promise, granting Pax Korbin a Freelancer mercenary charter, allowing him to take on contracts and to keep the HARD suit, as he was once again a registered merc.

This was all well and good, but it didn't change the more basic problem our adventurer has: He is pretty much broke. Restoring the Mk III, resupplying it with ammo and fuel, transportation and lodging would all cost a pretty penny, money he simply didn't have as the last Headhunters contract was null and void, even if he could have found somebody to honor it.

So he did what many men do in such a situation. He went to the bar. 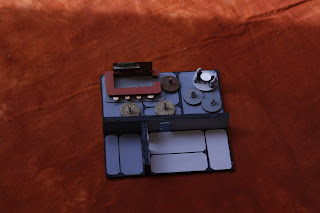 Krang's Bar is the only one in town, so it was not only to drown his sorrows. It would probably be the best place to find a contract or two so that he could get back on his feet.

The bar was somewhat dirty and the lighting poor, just like you'd expect. A few patrons arguing over the results of a Battling match in a corner booth, the bartender polishing a dirty glass with a dirtier towel. 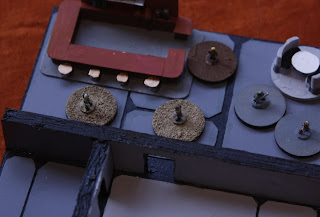 As he sat down at the bar, he ordered a shot of synthahol. The real stuff was out of his price range right now. After a few shots, a shadow fell over him. Pax didn't turn around, he wasn't looking for company right now. Later maybe, after he found some work. "I believe that it's customary to salute a superior, don't you sergeant?" the shadow spoke in a raspy voice, one familiar to Korbin. Could it really be?

He turned around, and found himself staring at Gibson Law, formerly of the Corvi Headhunters.
The Old Man, he survived!

Pax stood up and gave his comrade in arms a bear-hug, while both of them laughed at the improbability of the situation. Two men surviving that firestorm, what were the odds?

"I don't know how you got out kid, but I'm sure glad you did."
"Likewise, I thought I was the only one!" Pax smiled and ordered up a shot for Law as well.
The Old Man wrinkled his nose at the smell of the synthahol, commenting on it's foul taste as well.
"It seems we have fallen on hard times indeed when we are reduced to this stuff."
"Well, with the Headhunters dissolved, I guess we are both out of a job." Pax sighed.
"With that charter of yours you'll do alright, there is plenty of work to be had on Vestra after all." Law offered.
"How do you know about the charter already, that was only hours ago?" Pax asked, surprise evident on his face.
"I know some people, and it always pays off to be in the know in this business, you know?

The Old Man smiled sadly, before starting again: "Say, you wouldn't be interested in a contract? I just so happened to come across one that seems like just our sort of thing.."
"Why aren't you already out there then?" Pax asked.
"Needed another man, and I believe I just found him." Law smirked.
"Ok, so tell me more.."

Things are looking up a bit for our adventurer, having found a old comrade and a possible job as well!

Next time we will find out just what the job entails, and more adventure is bound to follow!

Posted by Alexander Wasberg at 00:47