Having made their way back to their rooms, our heroes unwind and tend to the various cuts and bruises they've sustained. CC starts sending out messages to her contacts, hoping one of them will be able to help her decode the BW lab data they took from the Rakuen facility here on Thylla I.

Vic and Kai slip out to get a drink and possibly find some odd jobs in case they need some extra funds. CC seems not to notice, absorbed in the appearently captivating data.


Later that same night, CC meets with a contact in an lab outside of the settlement.. 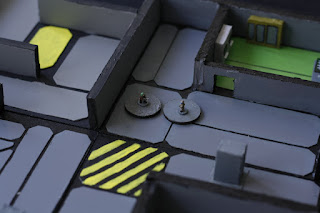 "Do you have the data miss?" A nervous-looking man in a protective suit steps out of a doorway.
"I do. Can you help me make sense of this? I've figured out bits and pieces, but they don't add together." CC replied, handing over a copy of the data.
"Come with me, I have a few terminals we can use."
Some time later:
"This can't be!" The scientist exclaimed, staring dumbfounded at the screen.
"What have you got?" CC asked, excited.
"I just pieced the last pieces of data together and it seems that Rakuen was up to some dark stuff. This project is a genetic experiment, using human and alien tissue to create a controllable hybrid for war."
Momentarily stunned, CC finally managed "I'm sure that's pretty illegal."
"More than just a little."
"I need to get back to my team, this is huge news."

Early in the morning she returned to Vic and Kai with the news.
"Shit, really!? That's just great, no wonder the Void Stalkers were sent after us!" Kai looked like he'd seen ghost.
"Well that explains some of the crazy stuff." Vic shrugged his shoulders. "But it doesn't really change anything, we need to see this through."
"I figured you'd say that." Kai started picking up his things as soon as he finished speaking.
The three of them packed up their things and headed for the spaceport.
Our heroes were on their way to Quineg, to the facility mentioned by Bella.

After a few days journey, they arrive at the small port on the mudball known as Quineg. 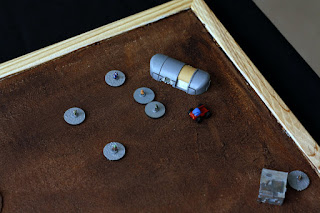 "We need to find out a way to the facility. It was strangely absent in the BW reports." CC cast a glance around, spotting a few habs standing away from the landing field. "Over there, let's ask some of the locals"

"Excuse me, do you know where we could find the local Rakuen facility?" Vic asked.
"Why would you want to go there?"
"We have business there friend, nothing untoward, I assure you."
"It's a few miles south of here, hidden away among the spore colonies." The colonists answer, pointing in the direction of the space port. 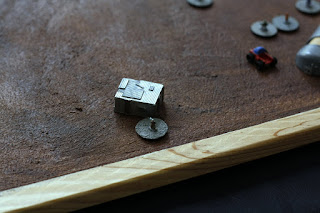 "Thanks, we appreciate it." Vic smiled and turned to CC and Kai, motioning the pair back toward the port.

As they turned to walk away, a suspicious thug peeks around the corner as they leave.
Talking into a comm unit, he let his friends know that their prey was headed their way. 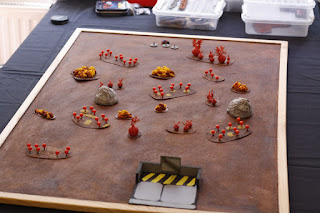 After a few hours of preparation and renting a vehicle, our heroes arrived at the location. In the distance, they saw the entrance to the research facility. 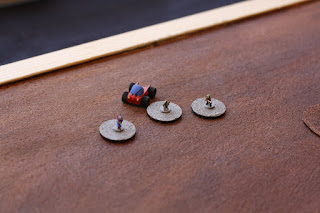 "It seems fairly empty. Lights are off, and I can't see anyone." CC looked through the scope of her rifle.
"Well, let's stay cautious in any case." Vic admonished. 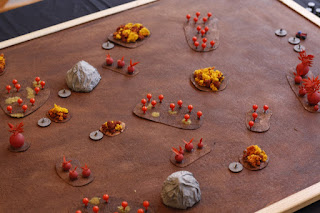 As the engine turned off and the trio starts going in among the fungi, they all saw thugs dressed in old militia uniforms with surplus weapons, the mismatched arms rusted and poorly kept.
"There they are, get them boys!" Their leader bellowed.

"We need to reach the facility, and quick!" Kai said as he looked around for some cover. 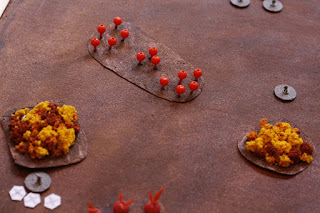 Deciding to break right through, CC ran towards the closest thicket of bushes, taking a shot as she skidded to a halt.

The shot screamed through the space between CC and her chosen prey. The rusted helmet doesn't even slow it down as the poor thug's brain is exploded across the inside of the helmet, and escaping through the exit hole in the back of the helmet. 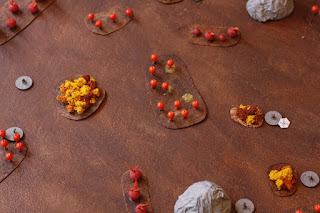 Vic gets into a stand of fungi, taking aim at a barely visible thug behind a bush. While it might have made a rifle shot miss, Vic's shotgun fires custom tungsten darts and this swarm of metal shreds through the bush.

The armor absorbs some of the darts, but not enough of them and the thug is knocked out. 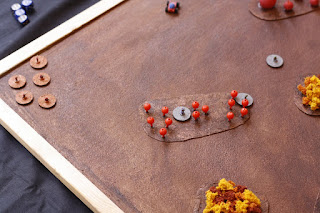 As Kai moves into the fungi, he hears something behind him and turns in time to see a squad of Void Stalkers marching out of the nearby vegetation.
"We've got incoming behind us boss!" Kai shouts, Vic only grunts his acknowledgement. 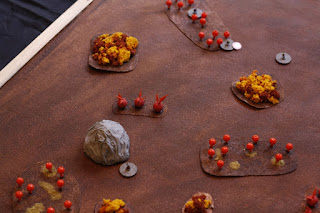 While Vic was temporarily distracted, the thug leader stepped out and fired his laser pistol at him.

His armor absorbed the energy, but it still burns as the ceramic glow red. 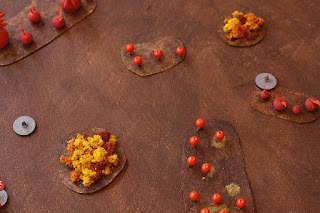 Dirt and grit flies as the laser blasts from one of the ambushers nearly miss CC. 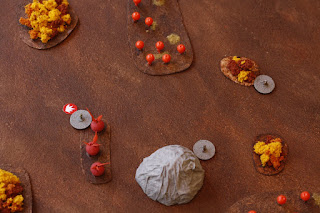 Even as his armor cools, Vic charges forward, firing his gun at the nearest ambusher.

The flechettes fly through the air, shredding foliage and knocking pieces of debris about but missing the ambushers. 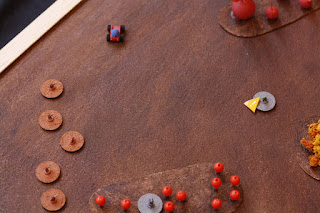 Storming forward in unison, the fusion blasts mercilessly slam into CC, exposed and out of cover. Her armor shatter and melt as the force of the attack knock her to the ground.

The stims built into her armour kicks in, keeping her from passing out, but just barely. 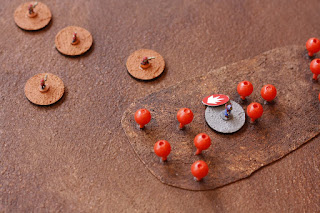 The remaining two merc attack Kai, the fusion rounds superheat the water in the fungi, blowing them them apart as the steam escapes their fleshy bodies.

Kai takes a few knocks himself, but his armor redirects worst of the energy. 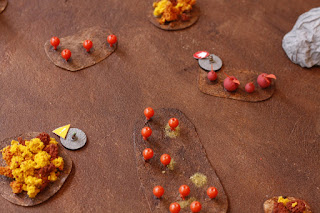 Getting herself off the ground, CC gets in behind a set of bushes. Sighting another ambusher, she fires on the move. Her target dodges, falling in behind the plants. 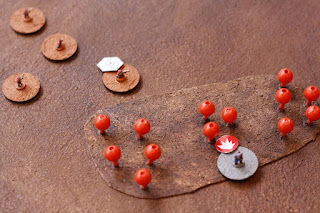 Fighting the urge to engage the lot of the Void Stalkers, Kai fired his pistol at one of them.


Caught by surprise, the mercenary goes down as his gutplate is pierced. 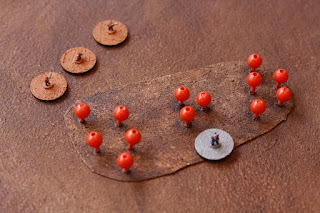 The remaining mercs open up on Kai, but they manage to destroy a whole copse of the local fungi and spray Kai with bits but didn't hit him. 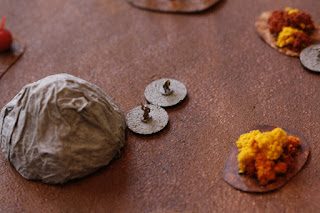 Vic charged at the leader, drawing his blade. Unlike the most local thugs, the ambush leader can fight good enough to keep Vic from scoring a decisive blow. 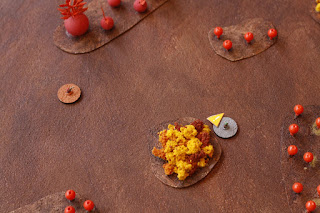 Following after the wounded CC, a merc catches up and opens fire. She is able to dodge out of the way however. 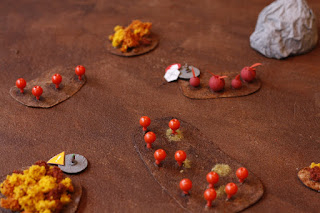 Brushing herself off again, CC fires at the pinned ambusher. Unable to avoid the bullet, he is knocked out.

Not resting on her laurels, CC then sprints into the fungi patch infront of her to seek cover from her pursuer. 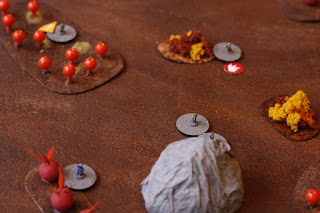 Kai runs from the former fungi patch into the next copse of vegetation.

To far away to get to blows, Kai fires his gun again.

His bullets pass close enough to force his intended target into cover. 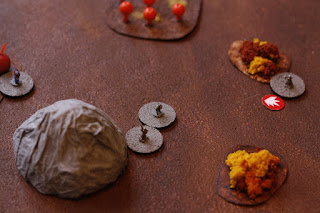 Vic and the leader keep fighting, neither able to gain the upper hand. 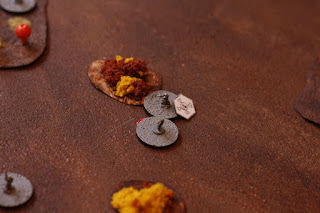 Vic finally manage to untangle himself and charge at the cowering ambusher.

Hitting him over the side of the head, Vic brought down his blade into the neck as he fell. 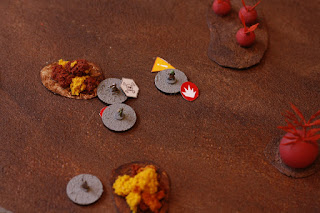 CC came up next to Vic, firing at the ambush leader, but missing. The leader returns fire, his laser bolt forced her to the ground. 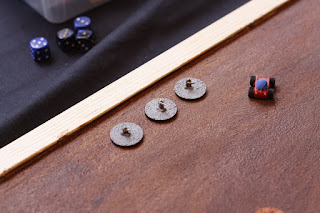 During the confusion of battle, the ambushers must have called for reinforcements, as a trio of thugs show up. 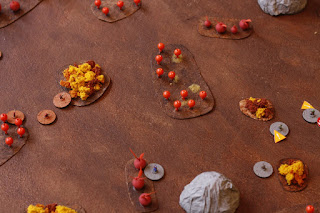 Trying to catch up to stop our heroes, the mercs fire a concentrated barrage, their fusion bolts scorching the air.


Vic gasps in pain as the energy bolts hit him in the back, burning him and charring his armor. 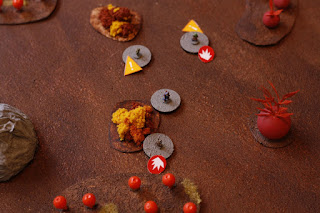 Kai turned on the leader of the ambushers, knocking him back with a blow that is barely blocked. 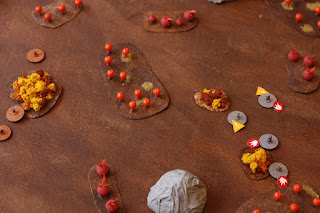 Coming around some bushes, the last merc hit Kai in the side. 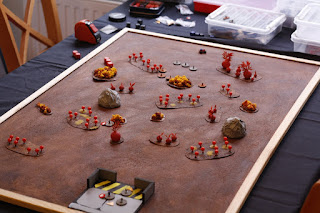 Realizing that they soon would be overwhelmed, Vic shouts for the lot of them to move it before they are surrounded.

Running full tilt, the trio manages to get into the facility.. 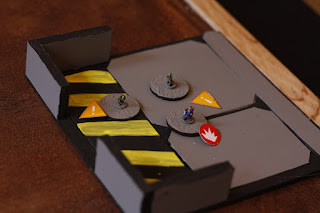 As soon as they entered, they realized something was very wrong. The dark entrance seems like it had been abandoned for some time. Under the blinking lights further inside the facility there was blood and viscera here and there.

A unrecognizable wail came from inside the facility and was soon answered by more cries of similar cadence.

"What the hell was that" CC asked, eyes darting left and right.
"I don't know, but it didn't sound human." Kai looked equally frightened.

This is when the trio realized that their pursuers had stopped dead, even started backing away.

"I don't like what this is shaping up to be." CC said a bit more confidently.
"Well, we have to go in there to finish this." Vic said, as he reloaded his shotgun.
"Let's go, boys and girls." He added as they stepped deeper into the gloom of the facility.

What will happen? What is making that noise? Will they find what they seek?

Tune in next time for the exciting continuation!
Posted by Alexander Wasberg at 02:40