While the NIJA had started their offensive on Churchill III with the partially successful raid on a USS outpost, the USS had not been idle.

Special forces units had been sent into imperial controlled cities and starports, in an attempt to unearth any intel on the troop dispositions and relative strenghts of the imperials on and around the Churchill system.

Most had reported back with little to no success, a few even had to shoot their way out. But now a report had come in from team mike, who had managed to get ahold of some classified reports. Having broken in to a government building turned local Imperial command post in the town of New Cairo, the Mike unit had uncovered intel that might help USS high command.

But they had been discovered.

The call for immediate reinforcement and retrieval of the intel went out as soon as the sitrep came in.
Unfortunately the Imperials maintain air superiority in the region, and any relief will have to come on the ground.. 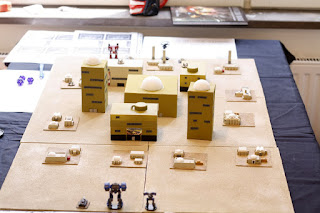 The USS relief-force, along with a light artillery unit not yet on the field, arrives on the outskirts of town. 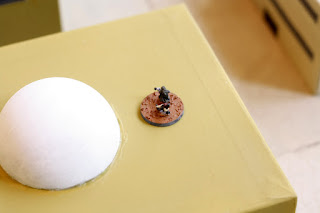 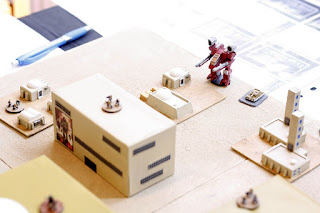 The Imperial forces have set up a perimiter outside the building. A local commander arrives just as the would-be rescuers do. 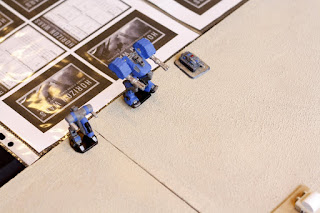 A better picture of the USS units, captured by Imperial recon drones. 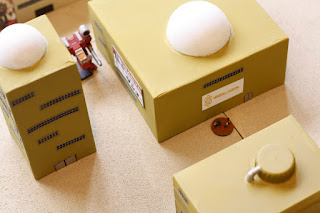 The Imperial commander is not one to sit idle, he charges his mech into the open square and release a deadly hail of shells and rockets.

Bloodied, but still alive, the USS special forces make their way out the back of the building, trying to cut off the line of sight to the enemy.

They can hear the heavy footfalls of the mech making it's way towards them. 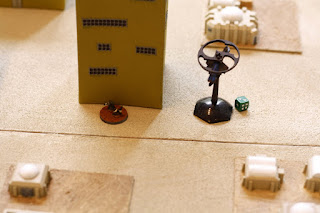 The attack helicopter lent to the commander for this operation swoops through the town, hunting the Mike unit.
Behind a skyscraper they finally catch up, and release a withering storm of fire.

The special forces unit is now almost completely unable to retailate due to the damage sustained to their equipment. but they only have to reach their frendlies.. 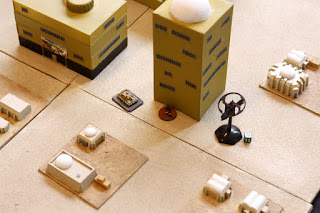 --But hot on the tail of the chopper is one of the light tanks!

It swings around the other corner, firing it's weapons almost point blank.

The superior training of the special forces is all that saves them. but how long can they endure this sort of punishment? 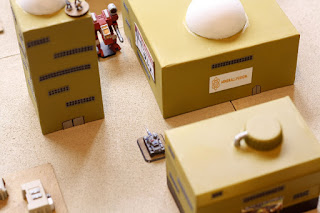 Realizing the need to block the advance of the enemy mech, the lone USS heavy cavalry charges into the intersection.

Placing round after round into the lumbering machine, the tank manages to deal some significant damage to both locomotion and weapons systems. But it's far from destroyed yet. 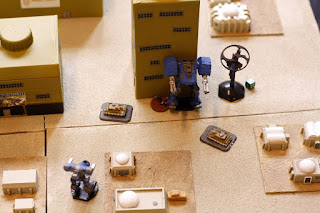 With time running out for team Mike, the USS CHQ makes a bold move, advancing into the thick of the enemy, firing at the light cavalry as he goes. As he gets close enough, the special forces unit starts uploading the stolen intel into his battle computer, distributing it into the tactical net of all in-range units.
The light USS mech moves up to support it's commander, adding stabbing beams of coherent light to the attacks. The Imperial light cavalry is starting to look worse for wear as more and more attacks strike home. 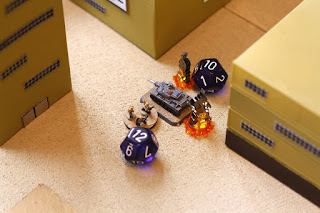 In a bold move, a heavy infantry unit charges the USS tank. Preoccupied with dueling the mech, the crew doesn't see the enemy until the last moment, and that's a bit too late! The explosions of anti-tank charges ravage the cavalry element, taking it out of commission! 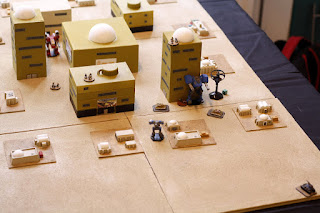 The start of the 2nd turn. 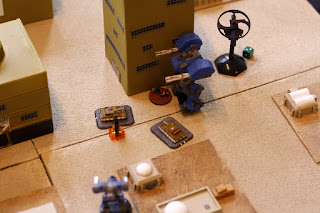 In an attempt to protect the infantry long enough to finish the upload, the USS CHQ swings his mech around, and fires on the light cavalry infront of him. The heavy guns at such short range rupures the fusion plant, and the unit is gone in a brilliant implosion.

The second light tank manages to get around the commander despite his efforts. Somehow they manage to miss their target as the mike unit drops to the ground. 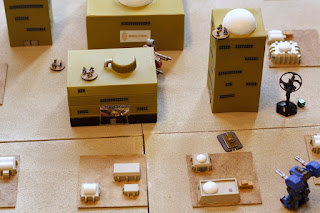 The special forces finally run out of luck, as the infantry in the building across picks their prone forms off. The intel transfer is interrupted as the equipment is shot to pieces, but a big part of it's already in the USS tac-net.
With the rescue a failiure and the intel only partially retrieved, the USS starts falling back. 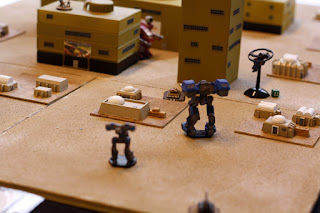 A red snout shoots out into view as the Imperial CHQ mech peeks out behind the building to take a shot at the retreating commander, but only manages to scratch paint. 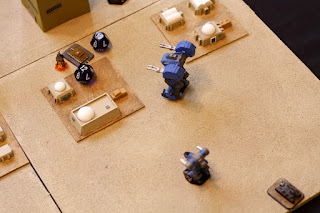 Fire from the light artillery brings the last Imperial light tank down, as shells rips it into ever smaller pieces.

With only the severly depleted chopper left to pursue them, the USS forces looks to be in the clear.. 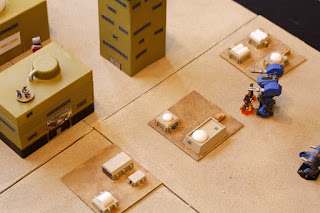 ..Untill a AT-rocket crosses the distance between the USS command mech and nearby building!
The Imperial heavy infantry took careful aim before letting their weapons fly, and the explosions rocking the mech is severe enough to force the pilot to eject from his mech!
The chopper does a last strafing run against the artillery before disengaging, but does no real damage.

Having fallen back far enough to outdistance any would-be pursuers, the USS fall back to safety.

Things are looking grim indeed for the USS, first a marginal but costly victory defending their outpost and now at least partially failed rescue attempt. The intel they did manage to download from team Mike might just be the sort of thing they need to turn the tables on the NIJA.

But the Imperial high command have plans of their own, and are not likely to sit idly by while their enemy plots..

A good game that turned out nothing like I imagined it would! Initially I was afraid that the SF unit would clear the table unharmed too easily, but as it turns out I maybe I should have let the USS start with the initiative the first round instead of rolling for it. You learn as long as you live I suppose!

I hope you've enjoyed it, I keep coming up with new scenarios at least once a week, so the next fight shouldn't be very far off!

Posted by Alexander Wasberg at 12:58