The end of last year, as well as the first few weeks of the new year have been great but hectic. A trip to Japan over the holidays made sure that I had little time for anything hobby-related until I returned, but it also inspired me a lot!

Being the holy-land of mechas, I have a bunch of new ideas for mecha-related gaming and hobbying, almost too many..

Having stumbled upon a interesting set of rules to pit mechs of all kinds and sizes against each other, I had a quick test game eariler today, to evaluate the rules before I go crazy painting up a ton of little killer robots!

First we have the stage: A badlands town said to be one of the many testing sites for experimental bipedal weapons being put through their paces by the NIJA's SADU.
While the NTC doesn't hold any formal claims in the area, a 3-unit team led by an experimental unit of their own was sent in to confirm that testing was taking place and capture or destroy any enemy mechs.


Recce-drone footage of the town the day before the NTC operation. 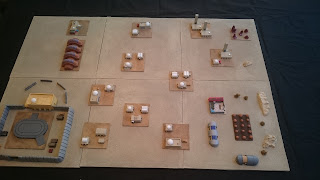 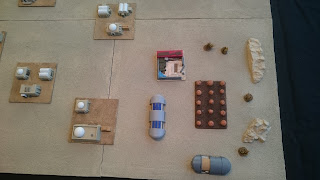 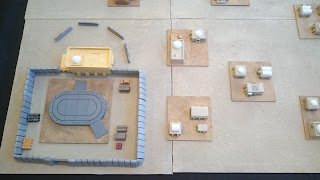 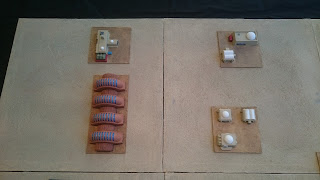 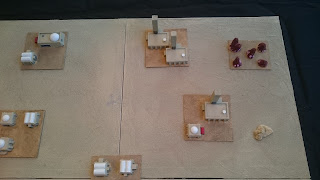 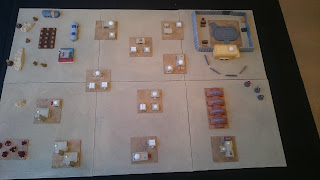 Last image transmitted as the SADU spotted and neutalized the drone. 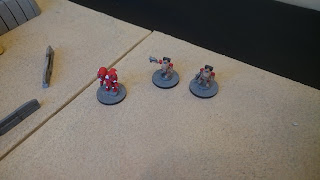 The Drone managed to confirm the NTC's suspicion: one experimental unit designated as an O-Yoroi and two Turtle-class mecha was on site for field trials. 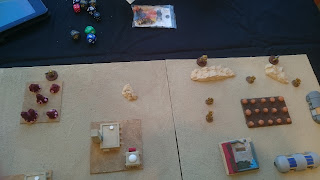 The NTC team deployed to deal with the foes was the standard squad: one Demon command mecha leading two Warriors. One carries an rocket pack while the other only have a rifle. 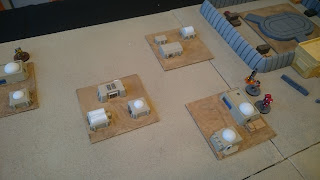 Forewarned of the attack, if only by minutes, the SADU commander springs into action, advancing all units. Feeling relativly safe behind a set of buildings, they stop to survey the situation. The commander had underestimated the speed of the NTC's mechs and barely escapes damage as one appear behind a nearby building. His escort reacts too slowly and it hit by a burst of rounds.
He is damaged, but still in the fight! 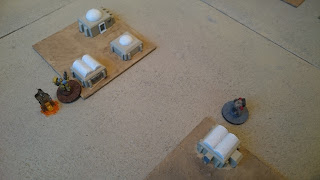 On the other side of the small town the second turtle-class mech dashes across the open to fire of one of the warriors. His hull-mounted machineguns rips into his prey, causing a short and starts an electrical fire!
The wounds aren't critical now, but the fire will rage through the warriors systems until it breaks down unless they can make field repairs! 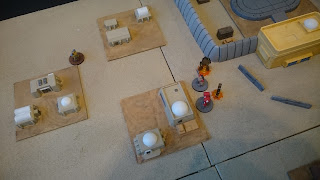 The demon command mech moves up as fast as he can, but is still without targets in sight!
At the same time his subordinate keeps closing with the enemy, firing as he goes. The already damaged turtle can't get out of the line of fire quickly enough and another burst punches through his armour. His reactor core is hit, detonating the mech like a bomb! Superheated shrapnel and burning fuel slam into the O-Yoroi, damaging its legs and boosters, rendering it immobile! A harsh blow to the NIJA, no doubt! 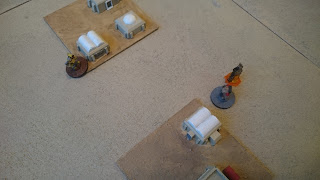 The second warrior turns to face his attacker, firing both rockets and slugs at him. The rocket goes wide, but a few of the slugs punch through the turtle, even managing to damage the fire-control of the enemy mech! The warrior then legs it for new cover, attempting to flank the immobilized enemy unit. 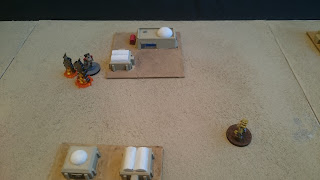 Spotting an opportunity to finish off the damaged turtle, the demon moves straight at him, firing off a rocket from each of the five tubes on his back. Only three of them connect, but it's enough to blow the mech into charred chunks of twisted metal. 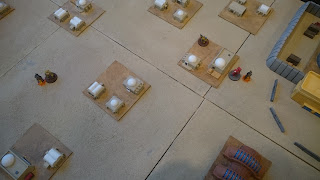 By speeding right at the turtle, the demon unintentionally put himself into the sights of the O-yoroi!
The experimental unit's high velocity cannon sent shells screaming into the side of the demon, knocking the mech over and nearly servering one leg. The pilot is dazed and disoriented by the hit. 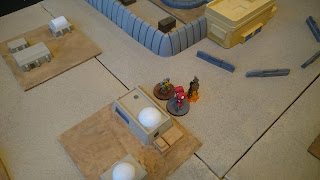 With the enemy's attention elsewhere, the first warrior sweeps around the corner, firing point-blank. The heavy slugs knock off armour plating and tear through wiring and as the warrior closes, it slams the pneumatic fist into its enemy's face! 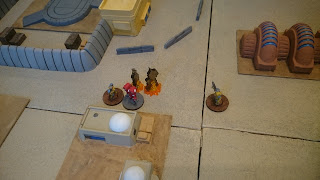 Having come around the back of the SADU's experimental unit, the second warrior sped towards it, firing at the immobile enemy. There's a big explosion as the unit breaks apart.

The mission is completed, but in the aftermath it was discovered that both the experimental units pilot and data core was missing. Could the pilot have escaped during the final moments of his unit?

The test game was a success, the basic mechanics works well, even if it was originally for gundam-style mecha combat. Some things will have to be house-ruled, for example certain critical hit effects was way too harsh in my opinion. But all in all, very good!

I hope to share more in the weeks to come, along with some Gundam Gashapon gaming etc.


Posted by Alexander Wasberg at 07:45