The Midas system; when Unity's exploration and survey corps (U-ESC for short) found the system it looked like so many others. While long range scans hadn't picked up any deposits of valuable matter greater than the galactic average, some strange fluctuations promted an unnamed bureaucrat to flag it for further analysis.

This would turn out to be wise.

During their in-system scans, the U-ESC picked up greater returns than the original scans ever predicted. Most, if not all, of the planets in what is now known as the Midas system had either greater than average amounts of precious metals, gases and trans-uranic elements or some mix of all of them.
Naturally Unity started drawing up charters, and the contracts bureau was abuzz with activity.

Soon most of the charters had been picked up by one corporation or another, but Midas Gamma was an exeption in that the holder of this particular charter was not a massive MegaCorp but an independent mining company: Celestial Mining Enterprises.

CME is small by any metric, but it's recent successes have given them capital enough to invest in the resource-rich planet. Needing to turn a profit sooner rather than later, the company quickly established a central colony city, Celes.
Celes is situated in the center of the greatest concentrations of minerals, including some high-energy crystals with some interesting and possibly profitable qualities. Like the spokes of a wheel, the mines and crystal fields surround the colony as well as the improvised shuttle port.

In their rush to start working their claim, Celestial Mining didn't aquire a security force of their own but rather chose to hire some contractors, led by Reginald "Reggie" Miller. Reggie's Raiders is a small but quite successful company and crucially willing to accept CME's credit while they bring their fortune out of the ground.

A garrison contract like this is usually quite lucrative owing to the fact that the worst you are likely to face is pirates or probes from bigger fish looking to take over the client's charter.

The Surface of Midas Gamma: 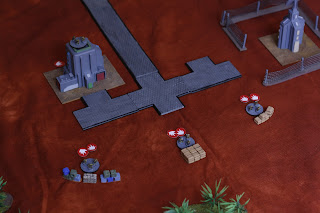 Reggie was bored. But bored is good, that just meant that nobody was trying to shoot, stab or eat him. The comm console suddenly hissed to life, and he picked up the receiver.
"This is Celes ATC, come in landing." -came the voice on the other end, a hint of unease audible.
"Go for Reggie control." Miller replied.
"Uh, we have a unscheduled transport asking permission to land a shuttle with supplies for the mines Mr. Miller." This was odd, they had received the monthly supply drop just over a week ago..
"Mr Miller, they say that they have places to be, if we don't want the order that's fine but they have a timetable." Reggie ponders the mystery for another second then replies: "What does the orbital scanners say?"
"The ship is a standard cargo-hauler. No strange emissions or obvious modifications on scans but the ship isn't registered in our database." comes the reply, somewhat tense.
"Ok, give them the go-ahead to land. I'll summon the boys just in case, could you have some armor from the barracks roll our way if they turn out to be pirates, copy?"
"Can do Mr Miller, they will be on their way, control out." 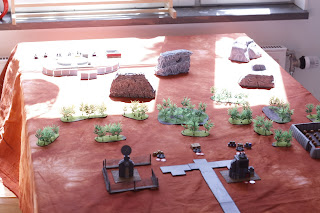 Reggie put down the handset and triggered the company channel on his personal comm:
"Ok you guys, there is an unscheduled landing happening in just a short bit, so get your asses in gear, I want you in your position and ready to roll in 5 mikes." 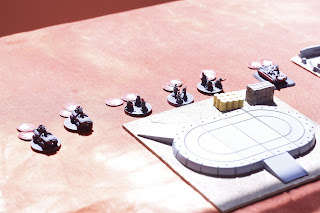 As the ship touched down, the fears of Miller and his men was realized: This was a raid! 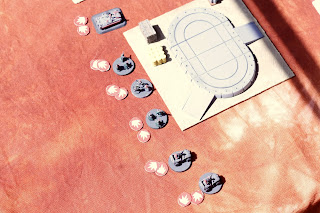 But these guys were no simple pirates, they looked like a proper military force.
Miller tried to call control in Celes again, only to be met with static.
"Sir, all but local comms are down, and the sat-link just dropped as well!" his comms-specialist Francs exclaimed.
"What?! But that means.." Miller started.
"Yeah, they are jamming us." Francs replied. 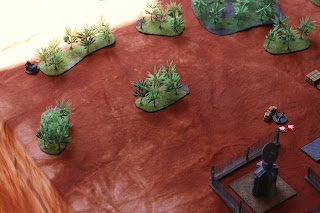 One of the armored cars shot forward at high speed, it's autocannon spewing shells at the Sat-link. 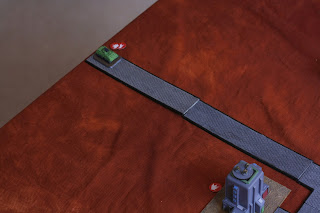 Realizing what the raiders were up to, Reggie got on the comms and urged the armor to hurry up.
Reggie's Raiders didn't really have any combat vehicles before this contract, but managed to score a good deal on some former Union surplus from before they were absorbed into the Zephyr MegaCorp. 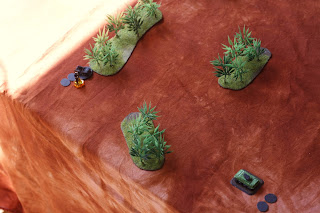 The missile carrier didn't waste any time, looking to block the advance of the armored car. Metal fragments and pieces of equipment is ripped off the car as the missiles strike a glancing blow. 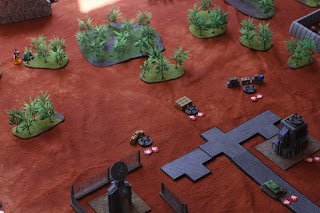 Following closely behind the carrier is a tank. With the enemy tank still beyond the rocky outcrops, the crew is understandably cautious. 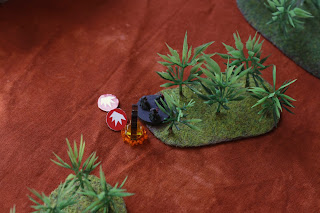 Spotting some of the shock infantry approaching the small base, the tankers fire a round into the trees. Dirt and debris shower the troopers, who are concussed but still in the fight. 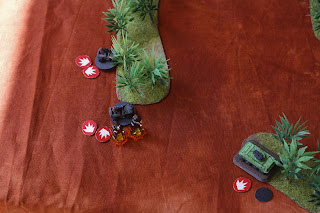 Worried the attackers will damage the Sat-link further, Miller commands the missile carrier to focus on the already damaged car. One of the wheels nearly come off as the missile explodes in the rear of speeding vehicle. 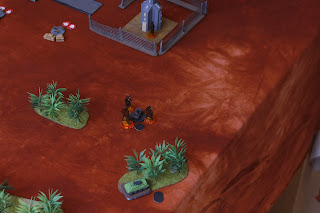 The second burst of missiles veers after the car as it closes on the satlink, it's cannon knocking chunks out of the superstructure before it goes up in a fireball as the missile catches up. 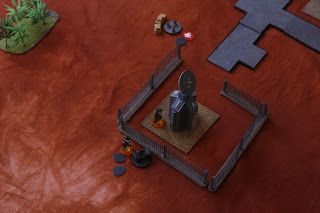 With the carrier reloading from it's magazines, the second car rushes forward and crashes into the fence as it fires shot after shot at the building before it. The autocannon lists akwardly when a burst of gunfire hits the car from the closest of Millers infantry units. 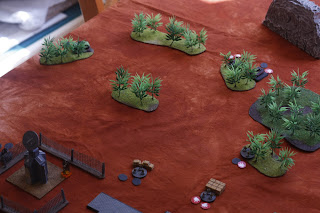 Cannon booming, the attacker's tank takes a chunk out of Sat-link. It's machineguns sweeps the woods to dissuade the advancing infantry unit from charging. 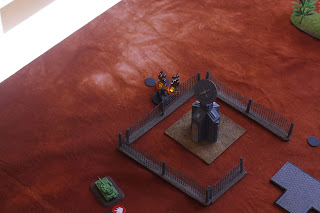 "Keep that armored car from crashing itself into the Sat-link!" Miller called out to the tank crew.
Revving their engine, the tank rolls forward and fires on the enemy car. The shot knocked the autocannon off from the enemy vehicle. 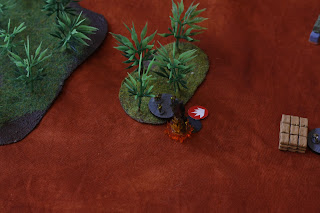 On the opposite side, one of Miller's infantry units are taken out of the fight as shock troopers lay down a furious barrage. 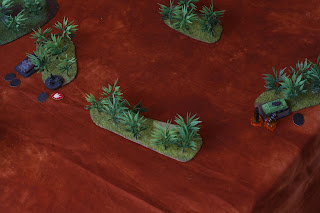 Turret turning towards the missile carrier, an anti-armor round rips through some of the tires and armor, leaving a great hole. Smoke roils out of it, but the vehicle is still aiming for the invaders. 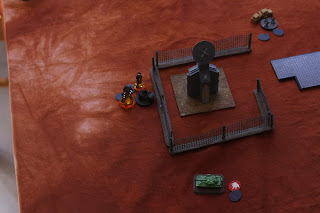 Afraid that the now disarmed vehicle will ram the Sat-link, the Raider's tank pump shell after shell into the armored vehicle, eventually blowing it to pieces. 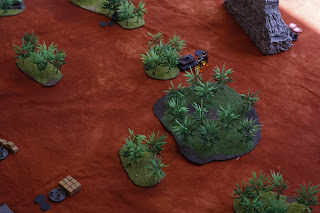 Now that the armored cars are taken care of, Reggie turns his company's attention to the enemy tank. Portable AT-rockets streak out and hit the flank of the vehicle, making dents and blowing armor panels off. 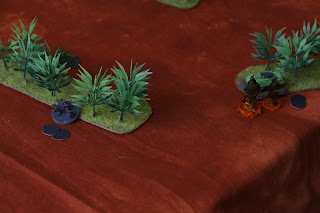 The attackers CHQ finally get close enough to engage the missile carrier. At this close range, the rockets make short work of the already crippled vehicle. 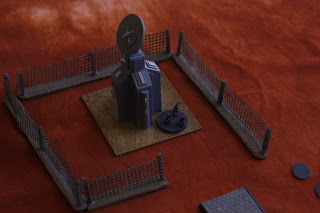 Unbeknownst to Miller, some of the techs working on the Sat-link station were infiltrators.
Gunfire could be heard streaming out of the facility, and soon there was silence. Miller's calls to the tower went unanswered, causing him to start towards the lower levels of his command post. 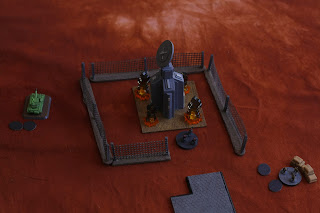 A huge explosion rips though the Sat-link facility! 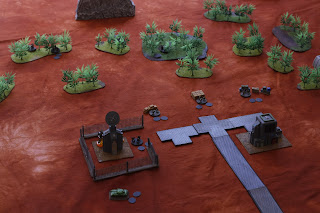 "Noo!" Miller screamed in rage.
The loss of the facility meant that the long-range comms as well as the orbital comms were down. This situation just made from bad to worse. This was no simple pirate raid, that's beyond question now. 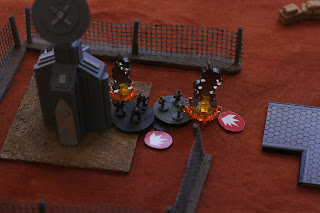 Hoping to capture the saboteurs, the infantry charges into the wreckage. The invaders had expected the move however, and their hastily prepared defence neutralized their would be captors. 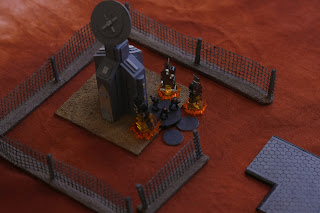 "We need to fall back Reggie, right now!" Miller's command staff almost drag him out of the building. The Raider's tank fires on the saboteurs, making them dive for cover in the rubble. 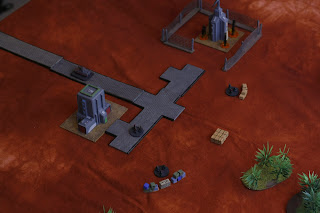 "Commander, I would advice you to surrender. You have lost the ability to communicate with the rest of Midas Gamma and there is no orbital comm satellites anymore. Lay down your arms and I will spare your men." The commander of the invading force broadcasts on an open channel.

"They have superior numbers and we have no backup coming, sir. We should consider it Reggie, for the men.." His XO said, clearly frustrated.
"I think you are right, no point in delaying it any longer." Reggie agreed.
He broadcast the surrender to the enemy commander.

Some time later the remaining members of Reggie's Raiders were safely locked up in the basements of the command post.

The invading commander is talking on his comms;
"Landing is ours, Sir." He reports to the newly arrived ship in orbit.
"Exellent, the 3rd and 4th detachments report that they soon have their objectives in hand. Begin Phase 2 as soon as your reinforcements land."
"Yes sir!"

A few weeks later, in the Charter and Contracts Department:

Standing up and smoothing out his suit, Welk looks over at Mr Yanner, the Rakuen represenative with barely disguised scorn. "Yes, it's most fortunate that your company showed up when it did, Yanner." He turned to the clerk: "We will fight this decision, of course. My company do not believe that the evidence shows any negligence on out part, this was a deliberate attack!"
The clerk looked disinterested at the attorney and agreed that this was his companies right.

With this Mr Welk and Mr Yanner exused themselves and left the clerks office.
"Why try to fight this? You know that it will take years if not decades before it's all said and done. By then your company won't have any capital to exploit the charter, if the company survives that long." Yanner asked his counterpart as they entered the elevator.
"We both know that you had something to do with the attack by the mysterious force, someone with deep pockets would be involved to manage to destroy all comms and wipe all data identifying the aggressors." Welk replied, staring daggers at the other man.
"Come now, that's conspiracy nonsense with no evidence to back it up. But we'll let such slander slide, your company did just receive it's death-warrant." Yanner looked smug, a small smile forming as he puts his hand on Welks shoulder before exits the elevator and went into the waiting car on the street.

"How did it go? No problems I hope?" asked the man seated across from Yanner in the fancy company car. "No, CME wants to fight the decision as you predicted." Yanner replied.
"I knew they would. We are moving up the timetable, contact our new security on Midas Gamma and let them know they will need to get ready for possible hostile action."
"Yes sir!"

The Car speeds off through the crowded streets, as Mr Welk calls his boss to update him on the latest findings.
"It's Welk sir, you were right. The CCD's preliminary finding sided with Rakuen."
There is a short silence on the other side of the line before the boss replied:
"Shit, that makes things tricky. We'll fight it of course, but meanwhile we need those mines and their content to make our payments and keep the partners happy."
He took a deep breath, as if to steady himself. "Call our friends in the area, they have to intervene." The boss finally said.
"Of course sir, I'll let them know."


What is going to happen on Midas Gamma?


Posted by Alexander Wasberg at 23:51