This particular game was a little experiment to see if I could run Horizon Wars somewhat like the battles in Votoms.

By making all the mechs P1 with a single point of armour I hoped to recreate the fast-paced destruction of the aforementioned show.

As promised on TWW, I'll try to talk a little about the mechanics and workings of Horizon Wars during the battle.
First we have the creation of the mechs taking part in this battle:

Unlike conventional elements in HW, Mechs (and aircraft) are built from a pool of points. A P1 mech have 11 points to allocate, a P2 gets 14 points and a heavy P3 mech have 17 points to construct it self with.

The stats in HW are Movement (how far you can move in inches), Firepower (how many dice you get to roll when you attack), Armour/Agility (a combined hp and armour, when this hits 0 you're dead) and Defence(allows you to cancel some hits when fired upon).

So the stats for this engagement:


The Imperials have 6 turtle mechs and 1 beetle as CHQ. The CHQ is the commander in the field, costs no points for your force and can give commands and guide indirect fire from other elements. Having a commander also allows you to spend points to upgrade conventional elements in your force if you have any.

And then we have the NTC


They come with 5 standard Warriors (of which one is CHQ) and 2 of the Bazooka Warrior variant.
As you can see, the stats for all the units have been kept fairly similar, as there are only so many ways to stretch the 11 points you have. You have to have at least 1 point in every stat, but the remainder can be placed as you prefer. While you could technically make a superfast or extremely armored mech, you run the risk of crippling yourself in some other aspect, so I elected to keep the forces very similar, also because it fits the source material.

Now onto the game:


The NTC patrol needed to get back to base after a recon mission deep behind the NIJA lines, but close to the border their scanners picked up massive magnetic reading. This could only mean one thing, a SADU force blocking their way. 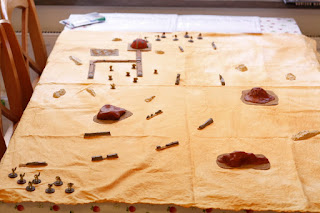 On the horizon the NTC patrol spots the blockading force. They need to break through the lines and get back to their base. The SADU meanwhile, needs to stop them.
I'm mostly playing narrative scenarios of my own making, but for those of you who like playing pick-up games or just want official scenarios, there are a bunch of them along with a special type of scenario called an adventure, for which the circumstances of the battle are generaded with a few dice rolls on some tables included in the rulebook. 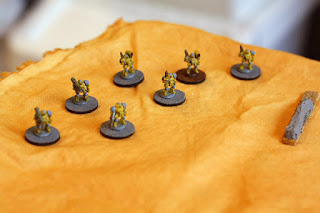 The NTC patrol, the CHQ is the mech with the brown base. 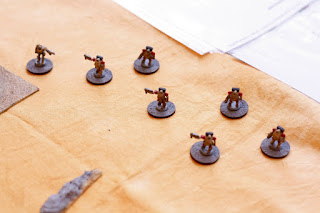 The Imperial SADU blockade, the Beetle CHQ mech can be seen to the far left. 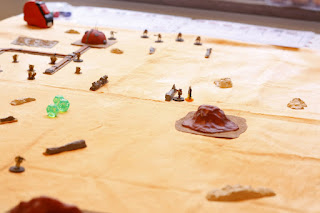 HW has an alternating activation system, you roll a d12 each at the start of the turn, highest roll wins. You then get to activate a element of your choice. Each element has 2 actions and you can take the same action twice if you like.
In the opening turn, most of the mechs just chose to move. Then you make a movement action, you can move cautiously up to your M value, allowing the model to stay alert to his surroundings and maintain 360 degree vision. This can be important for reactions to enemy moves.
You can also move at patrol speed, which is 2xM. You only have 180 degree vision this way, but you can combine this action into something called move and fire, allowing you to move up to 2xM and then fire with half your F dice.
The last option is to move rapidly, allowing you to speed up to 3xM, but you can't fire or react to enemy moves.

A longshot by a NTC bazooka damages the movement of the SADU Turtle. 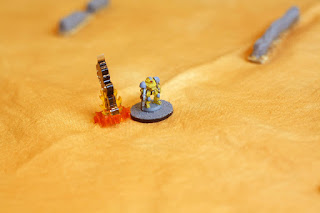 It doesn't take long before the SADU respond in kind, firing on one Warrior mech that sped into the open. If a model activates but doesn't spend both it's actions, it can keep the second action to use as a reaction instead. In this case, as the NTC mech speeds into the open, one of the lurking Turtles choose to take a fire action when the enemy pops into view.
As long as you can see the model at any time during its first action (and only the first action!) you can choose to react by either moving, moving and shooting or just shooting. It's important to know, however, that you are not required to direct your action against the acting model.
You might find it more advatageous to take a shot at a damaged companion before he can be supported by the new arrival for example. All reactions take place after the acting element finishes it's first action, but before the second is taken, so the reacting element has to wait until the action is finished.
When you shoot, you roll a number of d12 according to your Firepower stat (5 in this case) and the number you are looking to beat is the distance between the units+their A value+cover(if applicable)
This number can be higher than 12, since you roll your dice and then group them into hits. For example, in this case the reacting Turtle rolled 3,12,7,8 and a 9. The distance was 14" and the armour of the target is 1, so the number to beat is 15. Before we get to start making hits though, the NTC mech rolls his defence roll. Having a Defence value of 2, he rolls 2 d12, getting a 9 and a 5. The 5 does nothing as his enemy didn't roll any 5s, but the 9 cancels out the other, leaving the SADU mech with a 3,12,7 and an 8. The 3 and 12 can form one group, while the 7 and 8 forms another, making it two hits. This means that the target takes 2 points of damage. Normally the controlling player chooses what stats to degrade, but since one hit group contained a 12, that hit is a critical hit. This means that the attacking player gets to choose which stat to downgrade with that hit. Since the mech is only A1, that means it's destroyed, as reaching A0 destroys the unit. First blood to the SADU! 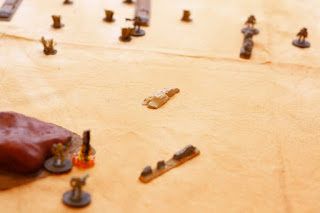 It doesn't take long before another barrage of rockets from another Turtle mech blows a second Warrior to bits, when he takes a critical hit. Ouch! 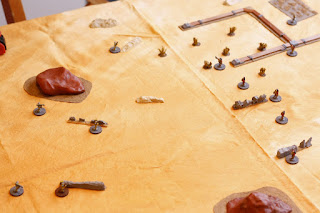 The start of the 2nd turn, when it really heats up. 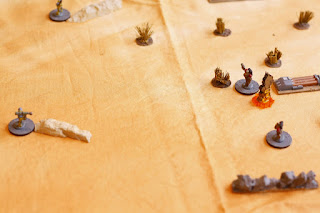 Looking to avenge the fallen, a bazooka Warrior moves and shoots at one of the Turles. Moving and shooting only gives you half your F stat rounded up, so 2 dice in this case. But as he rolls a 12 that the Imperial fails to block, the Turtle blasts apart into a hunk of scrap. 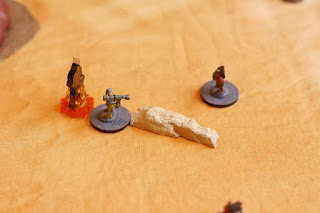 Since he finished his first action, the SADU mechs that have LOS are now allowed to react before he takes the second move. At this close range, even 2 or 3 dice can do a lot of damage. Yet another turtle speeds up, shooting as he goes. another roll with a undefended 12, and the bazooka Warrior never gets to take that second action. 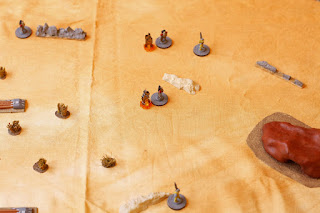 A second Turtle joins the first, shooting at the advancing NTC patrol. He misses, and retribution is swift. Both NTC mechs that are close by open up on a mech each, scoring several hits, damaging movement and firepower on both.. 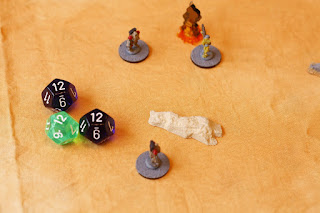 ..But the joy is short-lived as the Turtles second action sees some amazing shooting, at point blank range. Rolling 3 12s, of which none is canceld, the destruction is total for the poor NTC Warrior. 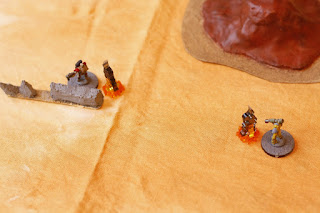 Trading blows, the last bazooka Warrior gives a good accounting of himself.. 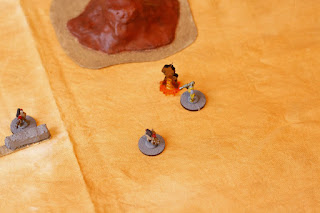 ..But another Turtle soon flanks him and scrap his machine. 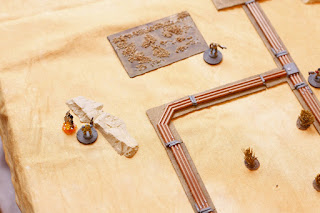 Trying to make it out, a Warrior makes a break for it. The SADU CHQ gives chase and manages to damage the Warriors weapons in a fierce shootout. The NTC leader makes a repair roll with his final action, hoping to speed around the slower Turtle mechs. A recover action is used to repair some damage caused earlier. You roll 1 d12 for each point of defence, against a threshold of the total damage sustained. For each dice beating this threshold, you can repair one damage to Movement,Firepower or Armour/Agility. 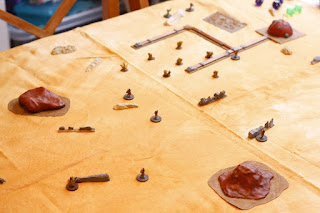 Start of the 3rd turn. The NTC defeat is clear for all to see, with only 2 units remaining. But they must press on, they need to reach their base! 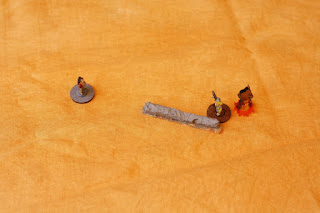 In a crazy gunfight, the Warrior is first wounded, manages to roll a crit when reacting but the Turtle cancels it by rolling a 12 on his defence! The second actions 5 firepower dice finishes what the first attack started, and the NTC patrol leader falls. 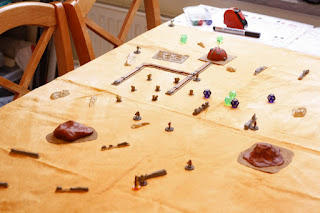 Gunning his engines, the last NTC mech manages to make it off the board! He is off to the base, but his entire unit is a smoking wreck.

A glorious Imperial victory, much needed morale boost for the SADU, who had up to this point failed to beat their NTC opponents a single time.

So the results of this little experiment?
It's not easy to say. While the results might have been skewed by the fact that the SADU rolled no less than 10! 12s during the game while their NTC counterparts rolled an less than impressive 3. In all the other games of HW and MechaWar I've played, I usually ended up with 3-4 crit rolls per game, both sides included! So I might need further testing, but it feels like luck could come to play to great a part when using A1 mechs. I've looked at both P1 A2 mechs and the possibility of just making all the mechs in these games P2, boosting A,M and D one point each in these cases, but I'm still unsure which is the best way to go about it.

While I won't ever mix my CAV mechs and these GZG ones, putting the grunts in P2 mechs does remove some from your available choices when I start adding in the prototype units used in other games between NTC and SADU.

I'll have to think about it some more I guess..

I pray you've liked this slightly different write-up, hopefully somebody on the fence or just interested in Horizon Wars might find this helpfull.

I have a few more stompy robot games planned for the near future, along with another go at Starport Scum, since the rules have been updated slightly.

Til next time!
Posted by Alexander Wasberg at 03:53