One of the last pieces of my military outpost terrain, and by far the most time-consuming has been the walls.

I wanted something like the T-barriers that are used in modern times, since it's a simple enough design that works for more setups than the originally intended one.

So I spent some time playing around with putty and oyomaru, trying my best to create a useable "master" if you will, since I knew I'd need quite a lot (I think my original estimate was around 20 or so, I've since doubled that).


These are the first set of walls, success or not? Judge for yourselves: 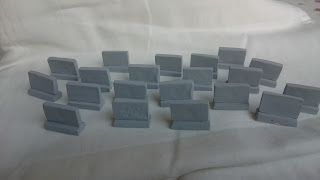 The first 20. Now I just need at least that many more.. 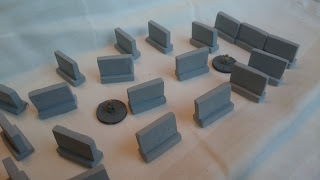 A couple of SADU and NTC soldiers for scale.. 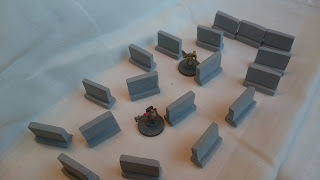 .. As well as a Warrior and a Turle-class mech. As you can see, the walls are just about tall enough to obstruct the view of the mechs as well.

So that's the small update for today!

With HorizonWars soon being released, I have kept from playing any more engagements between the SADU and NTC, as I think these new rules might fit perfectly. I will however try to give some big stompy robots a fight or two if time allows!

Posted by Alexander Wasberg at 01:43