Tale of the Wandering Slayer chapter 1.


Many days and nights he had wandered the dunes, seeking some traces of civilization. His water was running low and thirst soon accompanied the murderous rays of the desert sun. 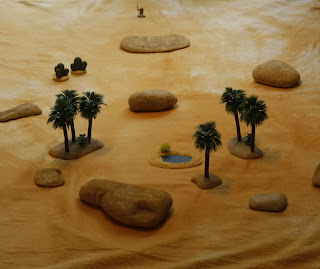 Towards the end of yet another day of the endless dunes and rocks, the Slayer thought he saw some green in the endless sea of sand. He tempered his joy, for this was not the first time he'd been fooled by the mirages. 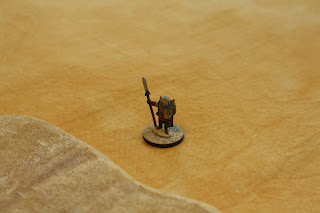 Dressed in garb and a steel armor of a make seldom found among the locals, it's clear to anyone that the Slayer is from the west. His fair skin and overly thick garments also betray that this is not a man nativ to these lands.
The tools of his trade makes it clear that his is a violent path and he had the scars to prove it. 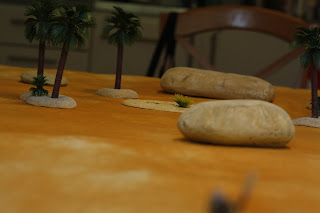 Wiping the sweat from his brow and stepping up onto the rocks, the wanderer squints towards the greenery around the oasis. 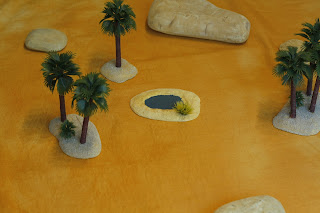 When the palms and glittering pool doesn't fade like others before had, he lets out a sigh of relief. The oasis looks to be real! 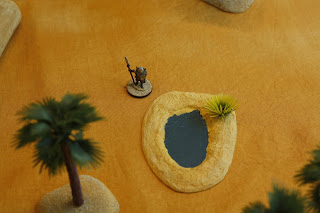 Almost falling into the pool, the cool water is a balm to the stricken wanderer. His thirst slaked and waterskin refilled, food is where his thoughts turn to next. Luckily the palms seem to have some dates left, a welcome addition to the bland but nutritious rations common among travelers. 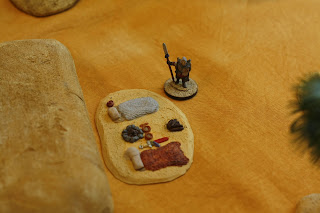 With a full belly our Slayer lays out his bedroll and tend to the small fire. The second bedroll is a spare, someplace for his gear while he rests and as a decoy, have saved him more than once when bandits have had less than honorable intentions. The Slayer turn in for the night, unwilling to brave the cold desert winds after several hard days march.


Early the next morning, in the pre-dawn gloom. 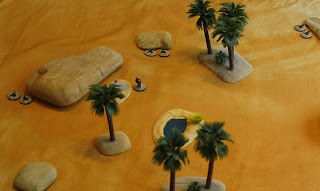 An inhuman chittering and scratching amongst the rocks around his camp awakes the wanderer. With practiced ease he jumps to his feet, slipping into his armor before grabbing his weapons and shield.

Mere seconds have passed since he awoke, but already some of the giant creatures come skittering into view.
Scorpions! But not just any regular beasts, no! For reasons unknown to men, these arachnids have grown to be several feet long and deadlier than their smaller counterparts. 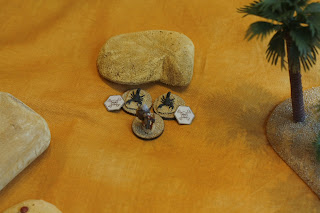 The Slayer is sure he can hear more than the two monstrous creatures in front of him, but taking action is his blood. With bounding leaps he closes the distance, swinging his spear to cleave one of the monsters with a murderous stroke and spins a full revolution, so great was the force of his swing.

The remaining scorpion hisses as it readied it's stinger and raises the massive claws. Our wanderer's spear flashes again however, pinning the giant insect against the rock before it can strike. 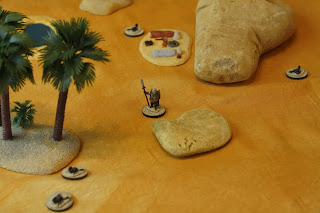 Soon another pair of arachnids come rushing into view while a second pair came rushing from behind the rock where he made camp. 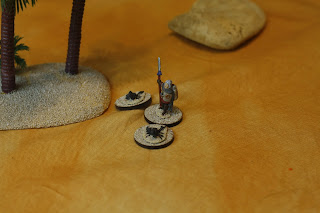 Again he rushes to meet them, but the damnable beasts are not as simple as they appear! The thick carapace helps deflect what would have been a killing blow as the beast skitters to the side at just the right moment.
Overextended, the Slayer couldn't block the stinger from the other scorpion. Screaming out in pain, blood flows freely from the piercing wound. 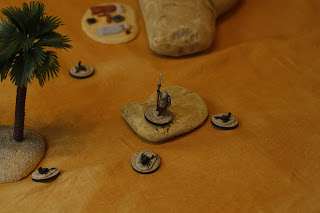 Leaping back onto a rock to escape further stings, the wanderer felt the noose tightening as the giant beasts close in on him. 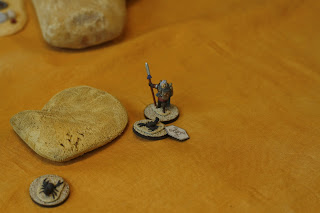 Running along the rock, our Slayer jumps to land behind a fiend separated from the pack. Surprising it, he manages to skewer the beast before it can turn to face him. 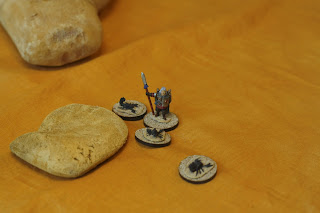 Relentlessly pursuing their next meal, the scorpions soon have our hero surrounded again. Blocking and slashing left and right, the Slayer keeps the arachnids at bay for a while. But finally a scorpion clamping on the shield with a claw and locking it down, the wanderer is unable to keep the fiends from stabbing and cutting him with their stingers and razor-sharp claws. 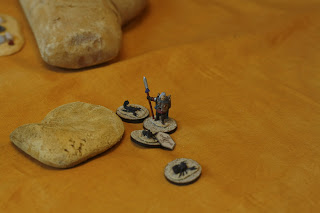 "Argh!" With a scream of rage and pain, our hero slash and pierce one of the offending beast, sending it's vile green blood flying in all directions. 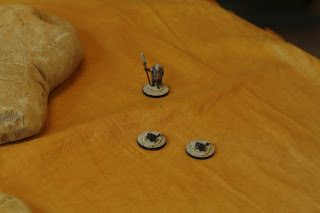 Feeling the wounds taking their toll, the Slayer swing his spear in a wide arc to force the remaining fiends back. With some breathing space, he backs off with the shield raised and spear at the ready. 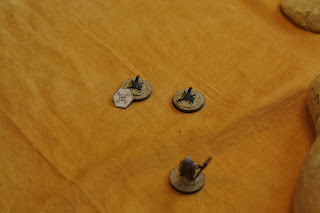 The fight having taken it's toll, the wanderer decides to take a chance. To improve his odds, he changes his grip and throws his spear with a grunt at one of the wounded beasts. The heavy spear isn't balanced for throwing but fortune smiles on him as it sinks deep into the sand, pinning the monstrous insect. 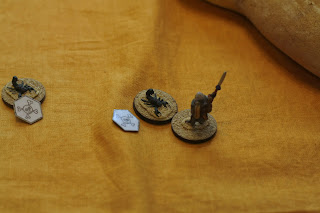 A single foe remain. He draws his blade and await it. With a vicious downward stroke the Slayer shows why he is so aptly called. The bisected parts of the creature falls at his feet, dead before it hits the ground! 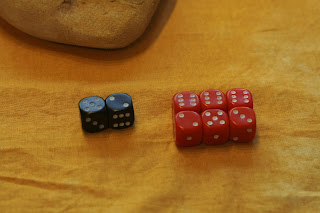 The final combat roll. Slayer's are the red dice. 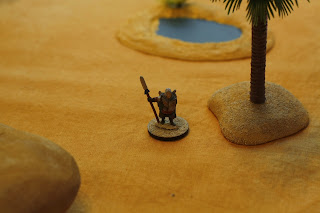 Bruised and bloodied, the Slayer tends to his wounds. Bathing in the clear water of the oasis, he feels refreshed, if still a bit tender. Before collecting his things he has a quick meal, taking the opportunity to roast some of the arachnids. One should never pass up fresh meat, after all. 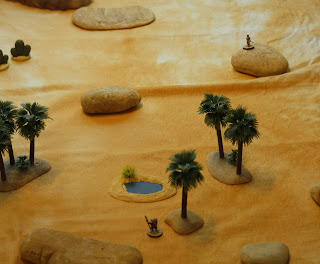 As he sets out to continue his journey, someone is watching him from afar.

Who is the mysterious stranger? Is he somehow involved with the attack on our wandering Slayer?

And just what is the Slayer seeking in the central deserts?

Til next time!
Posted by Alexander Wasberg at 04:19