Hold the objectives at all costs! A Horizon Wars AAR


It's no secret that I like Horizon Wars, it's a great game that can do a lot of different sorts of mecha and combined arms action play faster without making it too simplistic.

If you are interested in reading a bit about my attempts at tinkering with the rules to fit the flavor of certain mecha shows, read on. If you'd rather just get to the action, you can skip this first part!

I have recently started thinking about trying to play more games inspired by some personal favorites, VOTOMS, Gundam and Five Star Stories in particular. Horizon wars is sure to work for games in the spirit of these franchises I'm sure, but there are some things I can't help but wanting to tinker with to get the right feel. That is, the right feel according to me. ;)

So the problem is two-fold; the amount of damage units can sustain and close combat. Starting with that I think is the easier of the two, damage and how it's to be allocated, I set up this game between the SADU and the NTC.

The mechas of the respective parties are very much influenced by Votoms design, so I felt they were a good fit visually as well.

What I decided to try was to limit the amount of points units are allowed to place in the A(armor/agility) stat, thereby making them more likely to blow up in a spectacular fashion, just like the AT's of Votoms. In this game all the units are P2 mechs with an Armor value of 2.
Since I mostly play solo I use a damage allocation table rather than choosing what stat to reduce when a unit is hit. It used to look like this;
A roll of:
1-5 is a hit to the targets Movement.
6-10 is a hit to Firepower.
11-12 is a hit to the Armor/Agility.

I also modified this table a bit, so that there is an equal chance of "hitting" either of the 3 active stats. So for each hit I roll a d12;
A 1-4 means a hit to the targets Movement stat.
5-8 is a hit to Firepower.
9-12 is a hit to the Armor/Agility.

With these modifications in place I am hoping that the action on the table will be faster and more deadly as well as allowing critical hits have an even bigger impact.


This is where the actual AAR starts! 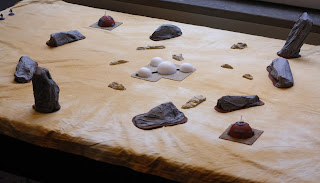 With the battles between the NTC and SADU turning into a stalemate, the high command on either side is content with whatever progress or even insignificant victory they can manage. That's why these two squads of mechs find themselves on opposite sides of a pair of automated mining facilities deep in the desert. The dome complex in the centre is both residences for the technicans and a research facility of lesser importance. Both sides have been ordered to take and hold, these facilities to deny them to the enemy. At any cost. 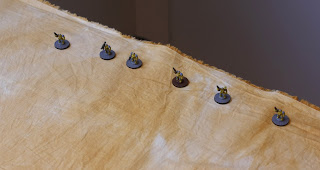 The NTC squad. 5 regular NTC Warrior class mechs and a bazooka-carrying Warrior model. The leader is the mech with the brown base.

The SADU unit. 5 of the Turtle-class frontline mechs, lead by a commander in a single Beetle-class unit. 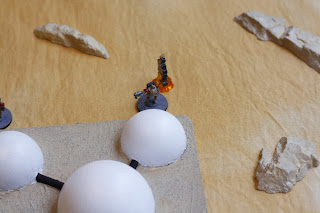 Most of the first turn is spent manuvering into place, a few daring pilots redline their machines to make it to the dome complex as fast as they can. Cover is scarce on the approach to the domes, something one of the NTC pilots take advantage of. His attack lands a heavy blow on the target, shredding most of it's armor, but it remains standing.. 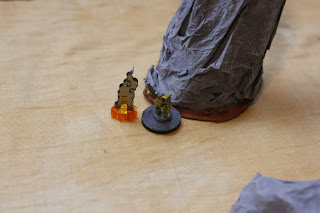 Having failed to destroy the enemy, the NTC mech is now in the open as a comrade of his target locks on from behind some cover. Blasted by rockets, he loses some armor too! 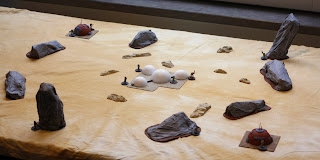 Start of the second turn. Each side left at least one unit to hold the mine closest to them, while they try to out-manouver the others. Two units from each side is playing a deadly game of cat and mouse outside the dome complex, trying to get the upper hand as trans-plas shatters and metal warps from stray shots. 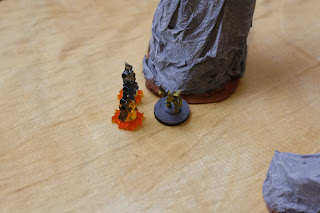 Getting out into the open was a bad idea. The SADU pilot lines up another barrage, finishing the job this time. The NTC pilot will hopefully learn from his error, if he makes it out that is. 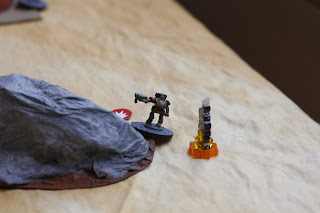 The partner to the recently downed Warrior mech pops around the corner, blowing a few pieces off the legs of the attacker and forcing the SADU mech to retreat back to the relative safety of his companions. 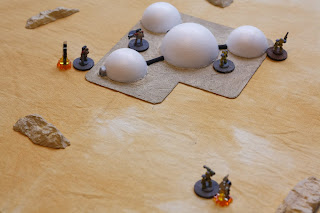 Speeding in from the south side, the bazooka Warrior fires round after round towards the nearest Turtle mech. He manages to do some damage to all of the targets systems, but not long after he takes a hit from a second mech, damaging his weapon. 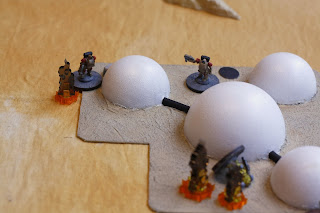 The stricken SADU mech decides to deal with the most immediate threat while the bazooka mech is busy switching barrels, he spins around the corner and releases a swarm of missiles at the mech there. Taken by surprise, the pilot doesn't have time even to return fire before his mech is coming apart at the seams from the ferocious attack. That's the second NTC mech down! 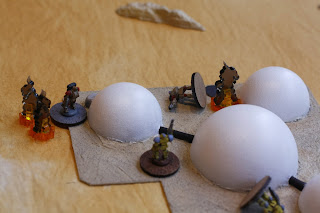 Taking control of the situation, the leader of the Warrior squad shows why he is in charge: In a single smooth spin, he fires his auto-cannon right through the cockpit of one of the Turtles, taking the mech out of action immediately. As he finished the manouver the next burst finds both arm and leg servos of the other SADU mech! 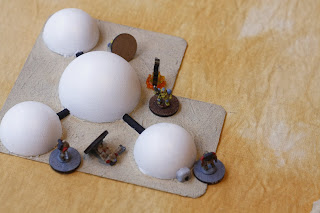 Knowing that keeping the centre is the way to victory, another machine is ordered away from the mine and charges at the NTC leader with rockets speeding towards the enemy machine. The explosions pummel the mech, rends the armor, but fails to take it out completely. 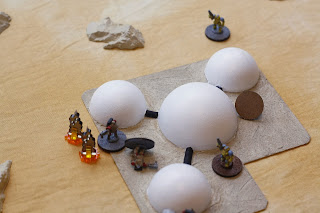 Coming to his commanders aid with a helping of hot lead, the last of the Warrior mechs manage to sever feed wires and damage actuators, but the targets armor remains mostly intact. 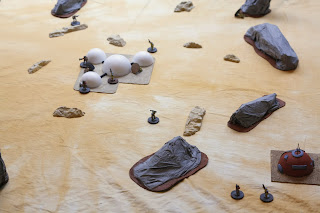 Along the southern edge one SADU pilot has gotten dangerously close to the NTC line and was in a shootout with the lone pilot left to guard it. 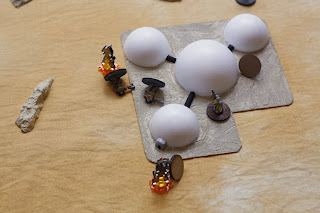 Once again the NTC commander shows his adversaries why he is the boss. He quickly blows apart the damaged machine to his left, before taking more carefull aim and scraping the one in front of him as well! 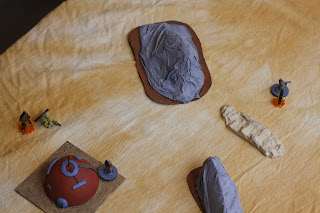 Meanwhile the infiltrating Turtle gains the upper hand and destroys the lone guard, before moving up and firing on the exposed back of the bazooka Warrior. 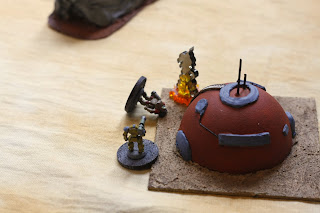 Spinning around to face the new threat, the bazooka warrior zooms into point blank range and delivers the finishing blow, sending pieces of the SADU mech scattering to the four winds. 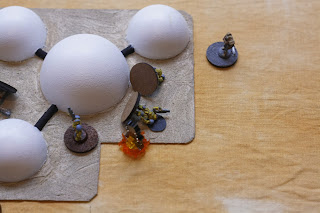 Having been caught in the deadly accurate fire of the SADU commander and his Beetle mech, the last Warrior mech swings in beind the dome complex to seek cover from his dogged pursuer. The SADU commander catches up however and deliver the final blow! 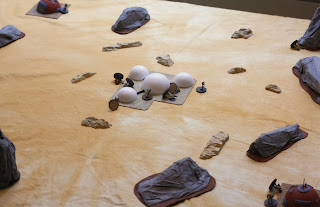 The Commanders face each other through the greasy smoke of the wrecked warmachines lying around them. They know they each have their orders, but they also know they can't hold this place with the troops left under their respective command. Gathering up the survivors on either side, they both decide to withdraw for now, taking the dead and wounded with them.

They will settle this another time.

Having finished the first test, I'm glad to see it work so well! The numbers might have been skewed a bit by the fact that I rolled quite a few criticals, but the end result came closer to the high mortality amongst AT pilots in VOTOMS and that was what I was hoping for. The NTC boss is definitely being declared an ace after his stellar preformance during this fight, taking down several mechs with little to no help!

I'm still considering several solutions to modify close combat and also trying to finish up my heavy gear minis while I wait for some new models for my latest idea. More on all this soon!

Posted by Alexander Wasberg at 21:46