Having painted up some more pico armor, I already had something to test them out with. Ivan of NWG sent me a early playtest document for a set of micro armor rules he started working on, so the CSA and Solar Bloc are given another chance to flex their muscle.

Some background: The CSA and Solar Bloc are vying for control of the world designated PX-065, a fairly small planet some way past the 30 parsec line from earth. Reports are mixed, but apparently something valueable have been found in the deserts of PX-065, since both sides started moving substansial amounts of assets dirtside.

The valley we can see below is situated on the edge of the open desert, a small outpost along with a power station and shield generator is the only things in sight. Because of the shield generator, no orbital assests can touch down but controlling the installation will allow that side to land more troops and equipment. 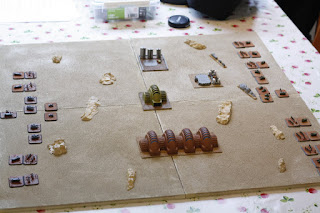 The battlefield, photos courtesy of the Human Space Broadcasting company. 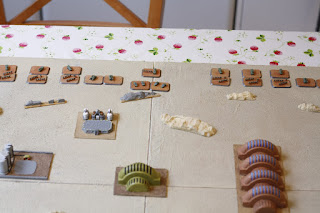 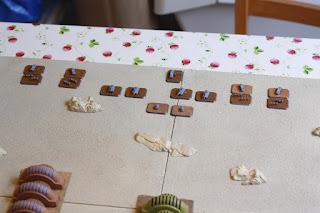 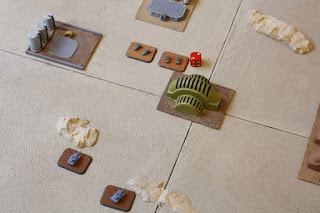 The SB scouts move up, and open fire on the tanks. The shots go wide. Chevalier tanks return fire. The hardbeam's deep boom is followed by exploding fuel and munitions as one scout blows apart. 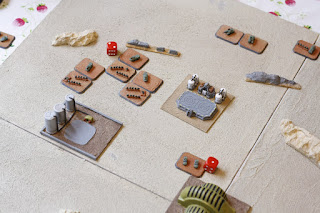 The first half-company of the Bloc moves out, heading for the re-fueling station. 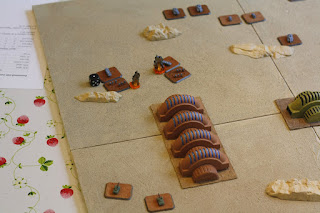 On the right flank the T-22's speed along, opening fire against the infantry along the ridge. HE rounds smash apart both a apc and one infantry platoon. 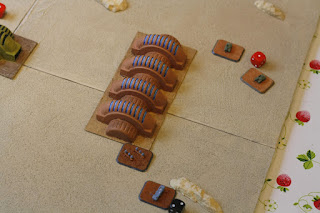 The remaining infantry order up their AT-gunners, but the rockets miss the T-22's. 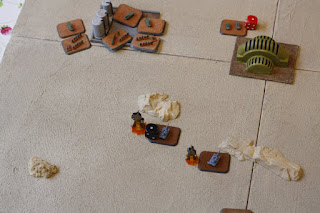 The Bloc infantry have now reached the supply post and entrench. Taking aim on a platoon of Chevaliers, the rockets scream across the desert. Hitting the flanks of the tanks, both Chevaliers go up in balls of flames. 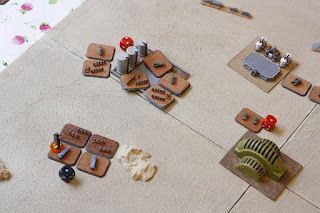 Pushing up behind the now destroyed tanks, CSA heavy infantry loose one apc during their advance. 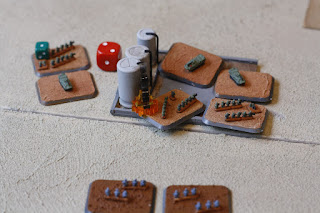 As soon as they are in effective range, they open fire. One platoon is neutralized and another driven into retreat and supressed. 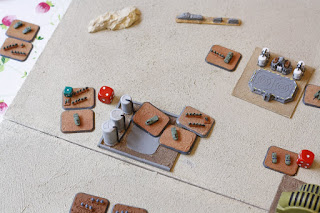 The Bloc commander move up to support the left flank, reducing their stress allowing a counter attack. The attack leads to a stalemate however. 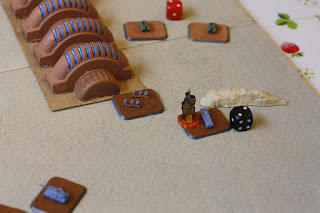 The T-22's fire again, blowing up the last apc of the unit. 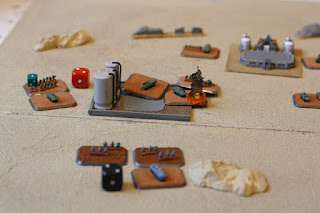 Another Solar Bloc apc is taken apart by smart missiles from the CSA heavy infantry. 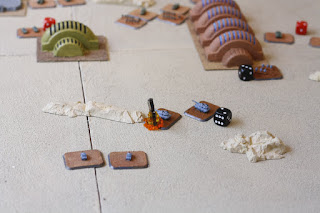 The second unit of Chevaliers roll up and fire on the 2nd half-company of Bloc infantry. The hardbeam weaponry is much better suited against enemy armor though, and they do little lasting harm. The return fire explodes the leftmost Chevalier, as an RPG punches through. 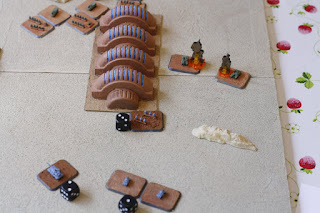 Down to a single tank, the CSA commander orders the Squire armored recon to engage the enemy T-22s, until the Chevalier can return fire. As it turns out, the autocannons of the Squires sets off the ammo stores of both enemy tanks and they explode in a brilliant fireball each. 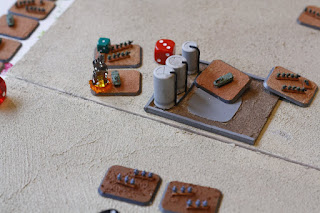 Pushing his men to their limit, the infantry makes another attack against the entrenched Bloc soldiers. The 2nd of their 3 apc's go up in flames. 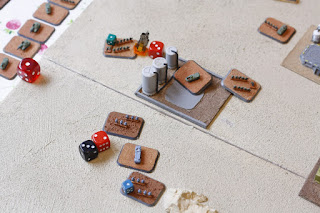 With support from the field commander, one platoon of Bloc infantry is taken down.. 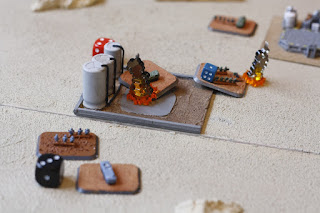 ..And then quickly followed by their remaining troops and vehicles. 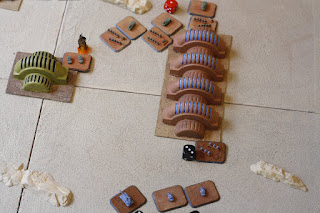 Swinging about, the Squire's autocannons bark once more, shredding the last scout of their enemy. 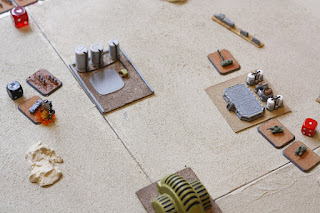 Finally activating, the second platoon of T-22's waste no time, taking out the last apc of the CSA force. 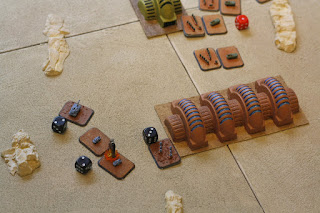 Marching on as relentlessly as ever, Bloc infantry once again open fire, rockets flying toward the 3 armored vehicles before them. The Chevalier and first Squire avoids the shots, but the last Squire is not so lucky. Hitting the hull straight on, superheated metal cooks of both fuel and ammunition.. 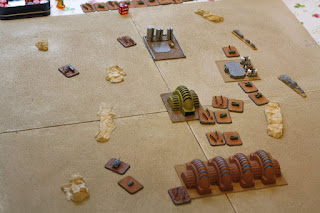 Turn 2. When every stand either fails their activation or choose not to activate, up to 3 stress markers are removed from each, and another turn begins. You're also allowed to retreat and remove a small number of supression token from infantry if any are supressed. I opted to stay put, as both forces could see the writing on the wall at this point. 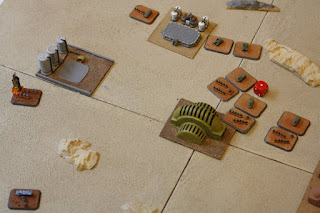 Being unhurt, the remaining CSA infantry intends to advance on the reactor and assault the Bloc forces holding it, but before they get far a lucky set of shots from one platoon renders them combat ineffective. 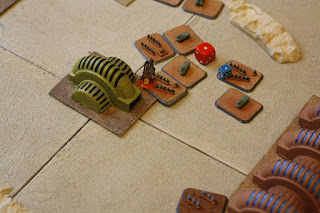 Knowing that it all rests on them now, the very last CSA troops manouver out from behind the shield generator, firing on the infantry as they go. 1 platoon is taken out and another driven back! 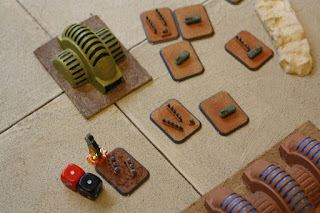 But the odds are just too great, the Bloc counter-assault destroys the heavy infantry. 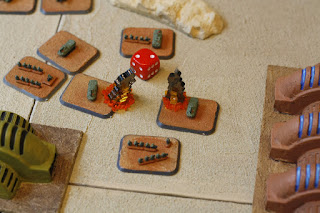 With all their infantry out of action, the commander of the CSA force orders a retreat, but not before the last remaining Chevalier puts two shots in the closest two apc's to dicourage any pursuers.

A good game, with quick and easy resolution, the whole game took me just over an hour, having never played it before. Vehicles were generally quite bad at supressing infantry and it was maybe a little too easy to re-activate troops, but great fun nontheless!

I have a few more 3mm terrain pieces I'm woking on, and I have another 14 or so stands of infantry to paint for my latest 6mm army. Feeling in the mood for some more Clash on the Fringe, I have started working on a few ideas for a new campaign, hopefully to start up soon..

Thats all for now, hope you've liked it and Til next time!

Posted by Alexander Wasberg at 23:47