As has become custom of late, I work on serveral different and fairly unrelated things at the same time.
That is also true for todays update, featuring some new fantasy minis in 6mm, and some 3mm and 6mm terrain.

We start with the new demon army from microworld, probably my favorite of the 6mm stuff in todays post: 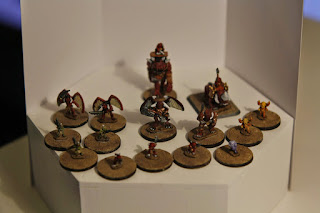 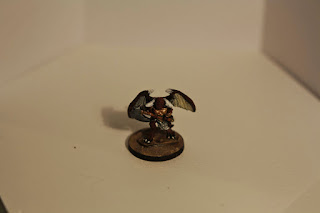 The Pit Lord. Vicious and powerful, these towering demons use their might and craft to keep their lessers in line. Ax'braxxas is no different. 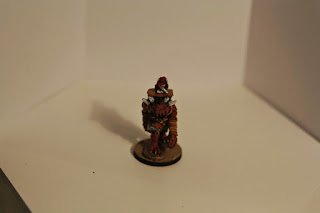 Largest of the demons to leave the infernal realm yet, this abyssal giant carries a lesser demon lord on his shoulders. 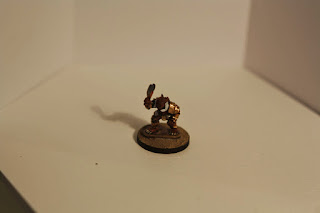 Reveling in death and dismemberment, the Juggernauts are a particularly large breed of demon. Not known for great intelligence, and prone to infighting, these massive killers are no doubt effective as both line-breakers and keeping the discipline in the ranks of lesser demons. 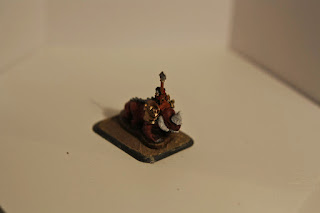 The abyssal rambeast is a twisted and mutated beast, with a foul temper to match. Charging like a rhino, the blade demon rider is there to try and prod the beast in the right direction. 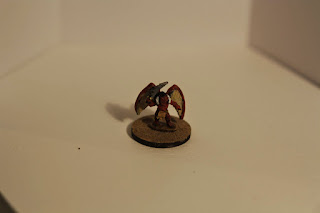 The fallen are what remains of an ancient race, beguiled by the promises of the abyssal lords. Over the aeons their numbers have been swelled with only the most powerful warriors, forsaking what they once were in exchange for power beyond anything they had before.. And are then forced into service in the abyssal armies by demons even more powerful than they. 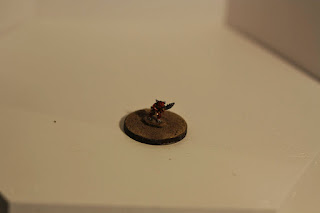 When a demonic incursion finaly happens, some of the first true demons to step out into the world are blade demons. Loyal followers of the abysses lord of war, they live to steal souls for their master by the blade of their swords. 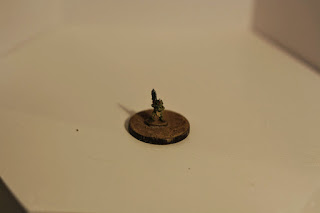 Another common sight when the demons invade are the cyclopean demons. Spreading foul plagues and a terrible miasma, the servants of the lord of death and disease are more common in smaller raids than the larger warhosts. 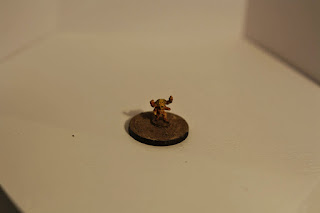 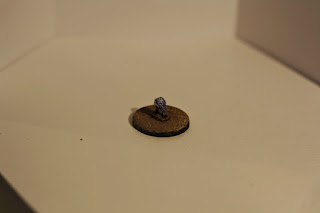 Finally there is the flame demons. Burning brightly in a neverending inferno of different hues, these demons delight in destroying what the mortal races have built, reducing it to little more than ash.

I mentioned that I got some proper leaders for my dwarven warband as well, so they got some attention along with the demons: 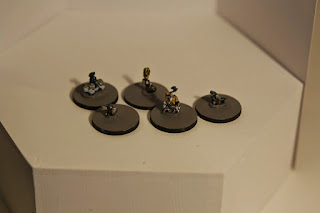 The heroes and even a cavalryman. and not any sort of cavalry, but Bear cavalry! 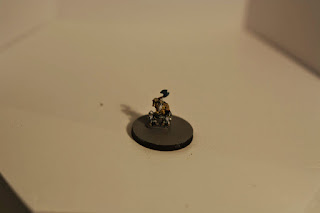 The lord of the High Peaks, Erblas Stoutshield. Being one of the few dwarven chiefs still holding his ancestral halls, he is attended by 2 shield-bearers as is proper for a man of his standing. 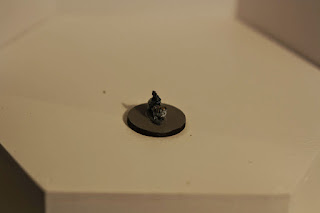 From the high passes comes Woin, atop a great white bear. A dangerous warrior on foot, his ferocious mount only adds to his danger. 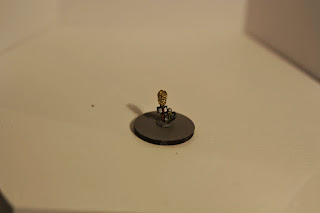 Bearing the standard of the High Peaks this standard bearer is a veteran warrior of the dwarves, entrusted with such a prestigious task. 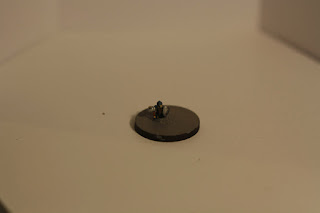 Trusting his axe and his shield, Borka wyrmkiller is man of reputation amongst his people. Once in his youth he slayed a wyrm that had getten into their mines singlehandedly, and he has grown no less skilled with the years since that say. 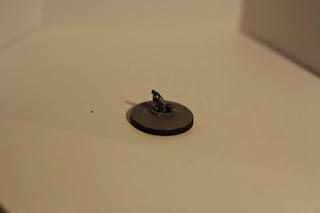 Finally there is the runepriest Farun, carrying his enchanted anvil. He can work almost any metal, and uses these to make the runes needed to focus his power.

There's also a few barbarians, for various characters in dungeoncrawls and as warband personalities: 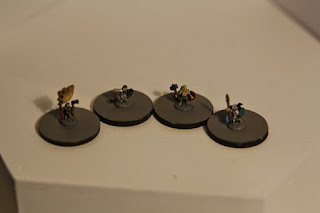 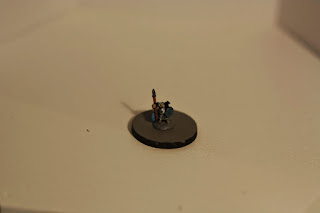 Known as the Crow-man, he is a man from the wilds. Skilled with both spear and shield, it's also rumored that he is knowledgable in the ways on magic. But surely that is only rumors? 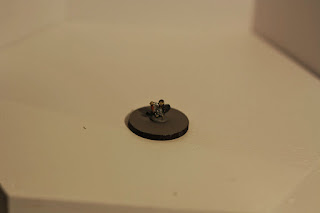 A clansman warrior, dressed in chainmail. Wielding his trusted axe and shield, he will charge his foe. 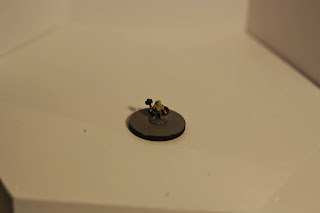 Infused with magic from the shamans of his people, Kurt is a warrior feared in the north, for few have stepped into combat with him and lived to tell about it. They say he fights like a man possessed, and that the magic from his shamans are acually forged the blood of his previous enemies. 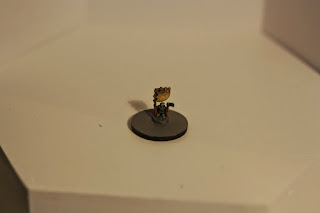 Bannerman of one of the northern tribes, an honor bestowed on few.

On the 6mm terrain side I only have a very old piece I finally managed to finish, since the rest just got re-sprayed to fit with my other pieces: 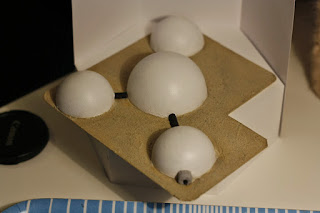 And on the pico side of things I did little more, but I have a few pieces awaiting completion, will share as soon as they are presentable! In the mean time: 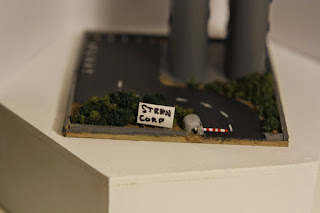 The Stern Corporations local headquarters. One of the bigger players in the fossil fuel business, Stern Corp is courted by both the CSA and the Solar Bloc. The recent conflicts have seen them upgrade their security a little bit, and rumours are abound that they've even met with the Outer Colonies.. 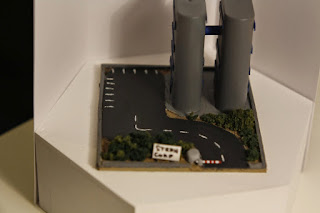 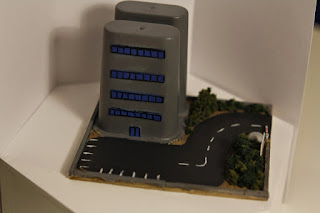 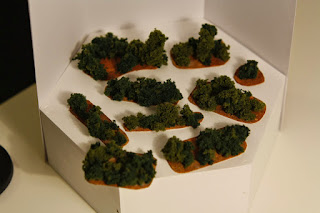 I've been needing an alternative to O8's trees, so I tried making some bases that can double as bushes for my 6mm games as well. Not that pretty, but objective completed at least I guess!

To finish off the update there is something not necessarily mini-related, but just quirky: 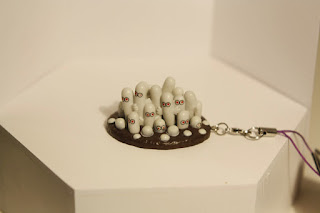 Some Hattifnattar from moomin. When we saw this on a site we usually order model kits from it just said "lots of Hattifnattar" so naturally I had to order it!

More terrain for 3 and 6mm sci fi is on its way, and as soon as I get my order from Pico Armor the 3mm sci-fi forces will have a few re-inforcements too!

Posted by Alexander Wasberg at 22:50