The completed tile 9, some extra terrain bits and a few more mechs.

..And so it is done! My original 9 tiles are all finished! 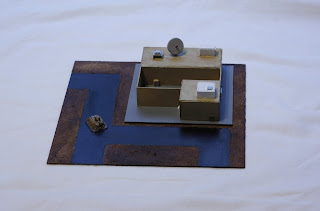 The communications post. As close to a sacred thing as the city has, this complex with several underground levels houses the only equipment on planet capable of sub-space transmissions. While every ship and more than a few houses have local transmitters, they only send over short distances and at a glacical pace if you intend to message someone outside the current solar system, unless you can get to a space station with a sub-space array. 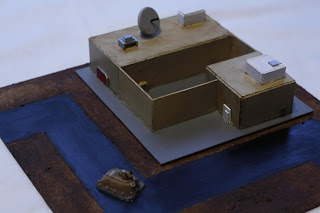 Most of the locals couldn't afford to send a message of course, but it's vital to the governing body in it's dealings with Unity and various factions from the fringe and beyond. 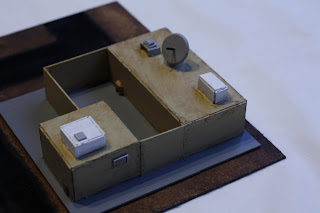 This of course makes the compound very valuable as a target if the city was ever attacked as well, as the side that holds the complex are the only ones in contact with the rest of the sector, not to mention the rest of the fringe. 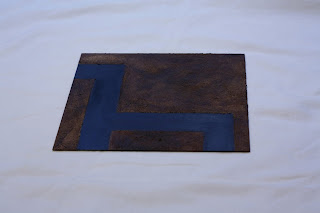 Like the rest of the tiles, the base has nothing glued down for maximum freedom when setting up alternate designs or just using a few tiles for smaller settlements.


I recently took to making a few more pieces of rocks to fill out any wilderness that needs more cover, since most of what I have is too small to make a difference when mechs come stomping about. Some nice spires and rocky outcrops could be used for other games as well, of course!

The set in it's entirety. 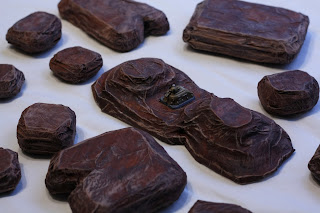 I chose to make the individual pieces high enough to partly obscure any mechs or monsters, so that they still fit somewhat with infantry and tanks next to them. this way they can provide some cover whithout being too big. Or so I think anyhow. 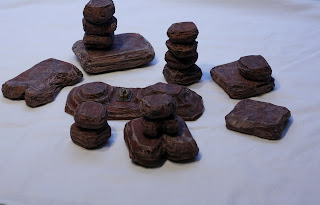 As you might have figured, the flat tops are not for looks, but rather practicality. This allows for them to be stacked, producing something somewhat badlands-like, with rock spires high enough to cover most of even a titanic machine or monstrosity.


But it's not all piles of rocks and houses in today's post, no sir! There is also no less than two trios of new mechs. I say new, but these have been sitting waiting for some paint for a while, and on a whim I decided it was time for more CAV mechs.

Going forward I have decided to keep the original designations of the mechs when intergrated into my version of the "Fringe-verse" of NWG fame, just to make it easier for myself.

The whole group, with a hovertank for scale. 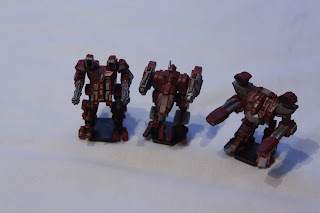 The new arrivals for SADU's mech detachment, from left to right we have: a Starhawk VI, a Voodo and finally a Katana. 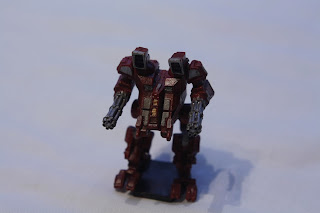 The Starhawk VI is a medium class mech, armed with a set of rotary cannons loaded with APIT ammo in each arm and a pair of missile launchers on top for added anti-air/armor capabilities. 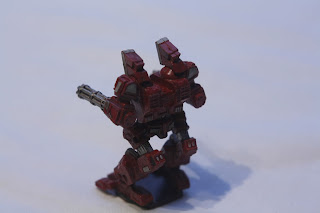 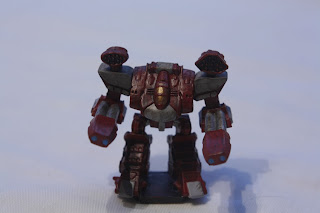 The Heavy Katana mech is slow but packs awesome firepower. Two dual-linked fusion cannons make up the main armament, with two missile launchers as back-up if any unforseen threats should appear. 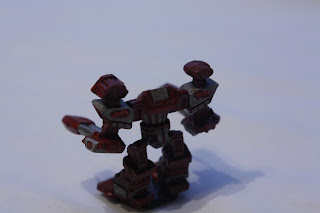 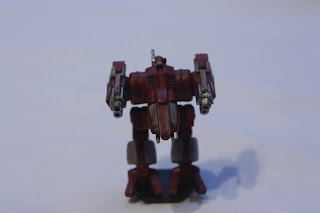 The Vodoo is another medium mech, faster but lightly armed compared to others of it's class. Made for scouting and flank attacks, the Vodoo has a pair of double-barreled cannons sitting on each shoulder as well as a chin mounted dual laser for protection. 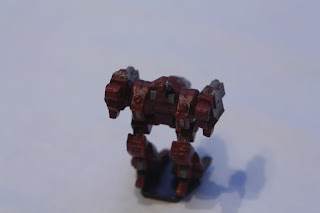 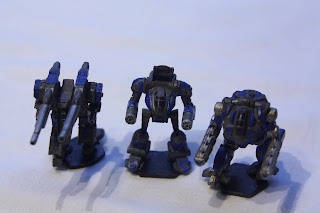 Their principal opponent, the USS have also gotten some re-inforcements: a Falcon, a Regent and finally an Imperator class mech. 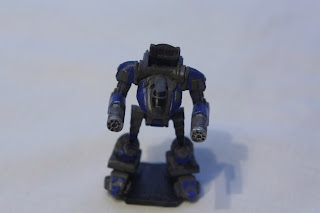 The regent is pretty small for a medium mech, but don't let that fool you. It's speed and agility lets it outmanouver larger mechs, and from close range it's rockets and multi-barreled guns can do a lot of damage. 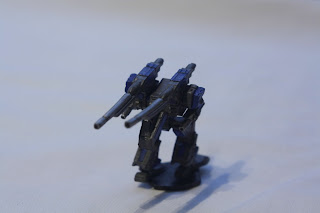 The Falcon is something of an odd mech, falling into the higher end of the medium weight class, but carrying a complement of weapons a fair bit heavier than most of it's size. The railguns on it's shoulders can punch out smaller mechs with ease, and even put a dent in a enemy heavy. 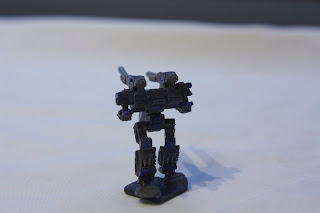 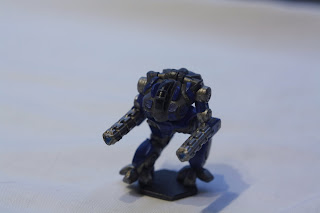 Bringing the total up to two, the newly arrived Imperator will join it's brother mech in the USS ranks. A heavy mech with two particle cannons, it's thick armor and powerful weapons makes it a slugger to be feared. 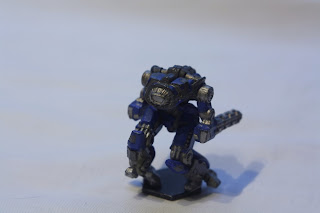 As you might have noticed, I haven't had the time to put together a shot of the entire set of tiles. I hope to rectify that soon, and have my first game of Horizon Wars, and quite possibly Mekatac, on that very same board.

Til next time!
Posted by Alexander Wasberg at 00:37